A friend was recently describing an old, Victorian home with a somewhat derelict (but impossibly romantic) glassed-in room built on one side.  He stumbled over the language while explaining it, unsure whether to call it a  solarium or a conservatory.  What’s the difference, he asked?

And we, gumshoe detectives that we are, decided to take the case.

We learned that the distinctions are few and, in this day and age, the words are used pretty much interchangeably.  The differences we could find lay more in their historical context than in their current-day function.

While conservatories were first conceived in Europe as places to, literally, conserve and nurture plants, the design of solaria seems to be more human-centric.  In the dictionary, a solarium is defined as “part of a house arranged to receive the sun’s rays” and “a room (as in a hospital) used especially for sunbathing or therapeutic exposure to light.”

Both solaria and conservatories are attached by one wall to the building (otherwise, we guess, they’d just be called greenhouses).  Both words suggest a room made mostly of glass, though the word conservatory seems to refer more exclusively to British-style iron work and not as much to wood-framed rooms.

Whatever you call them – and with the power vested in us as bloggers – we sanction the use of either word to describe the following images.  The design of these pretty glass rooms run the spectrum from opulent to English countryside to bohemian, and we like them all.

The sheer scale of this one is breathtaking and, though we quail at the thought of washing all those windows, we certainly wouldn’t object to warm afternoons spent beneath the palms. 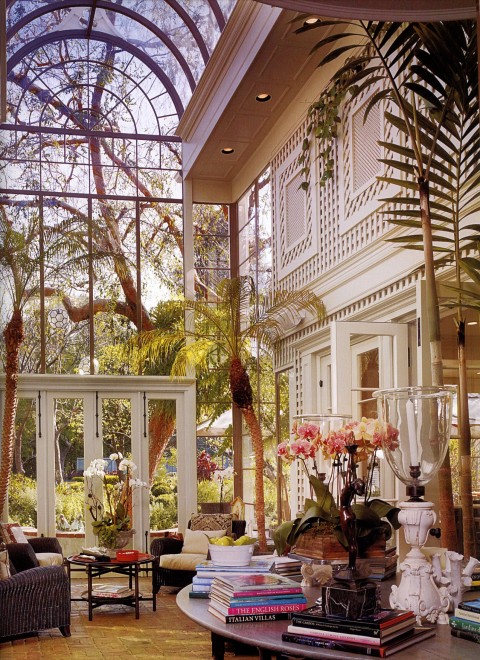 The tile in this conservatory is glorious – put some chairs around that table and we’d be the dinner guests who never leave.

Can you hear that blue caned chair calling your name? 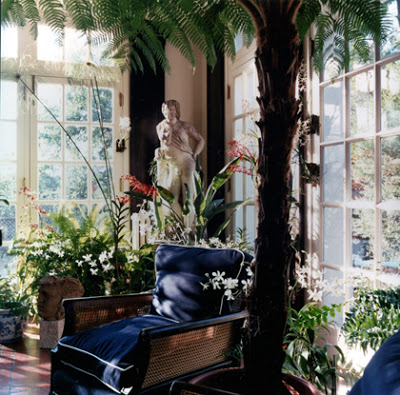 A living ceiling and tiled floors?  Be still our hearts. 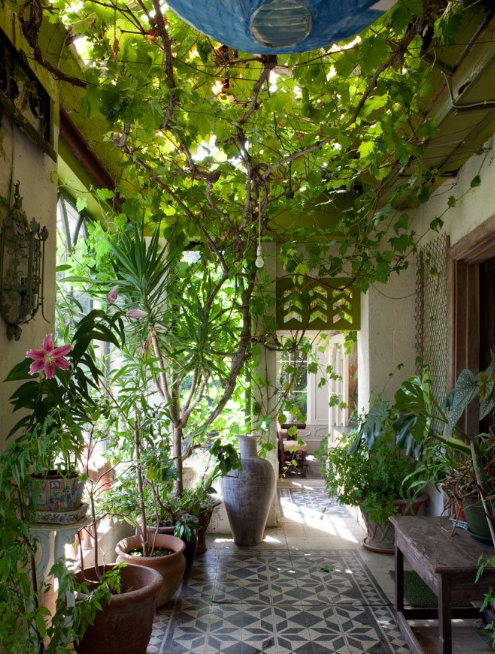 We wouldn’t object to some time spent hanging out in this incarnation:

Nor among these perfect plants: 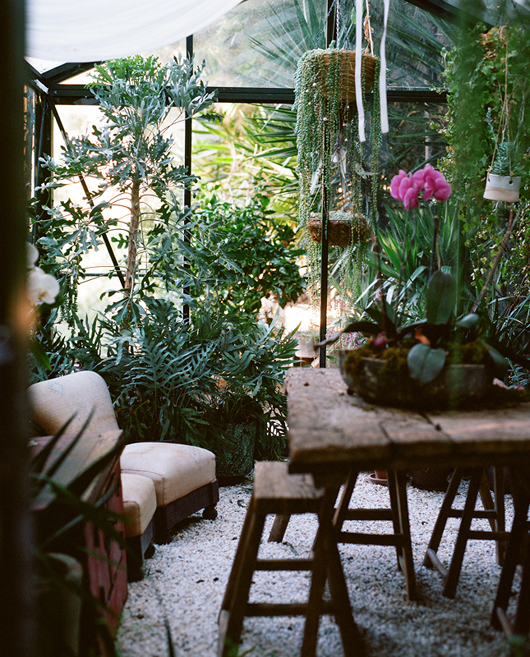 Solaria seem like they’d be especially nice on misty days, and we can both imagine happy hours spent in this hammock. 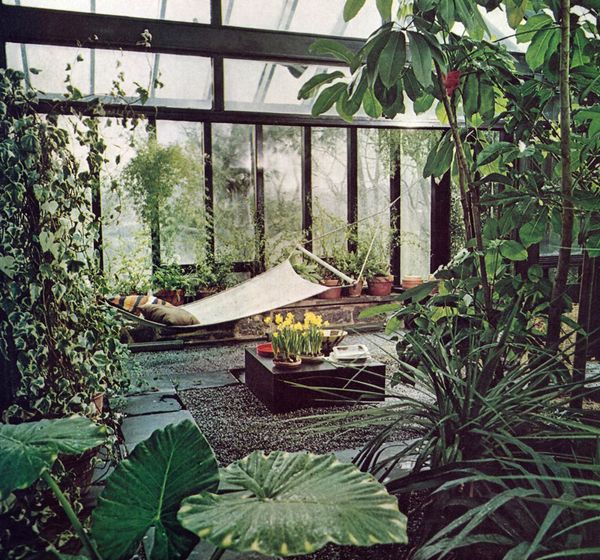 The wide-plank floors and textile-draped couch give this one a decidedly bohemian feel that we like a lot. 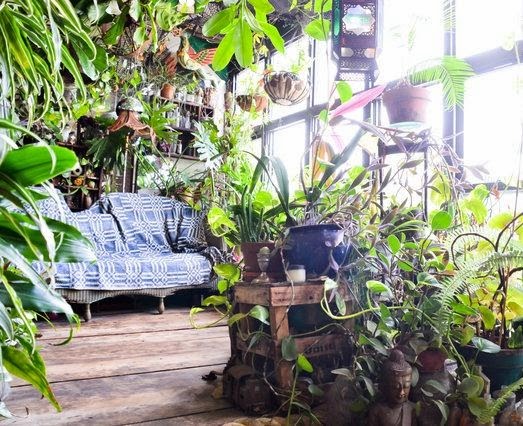 These rooms, scanned from one of Terence Conran’s books, effectively blur the lines between indoors and out. 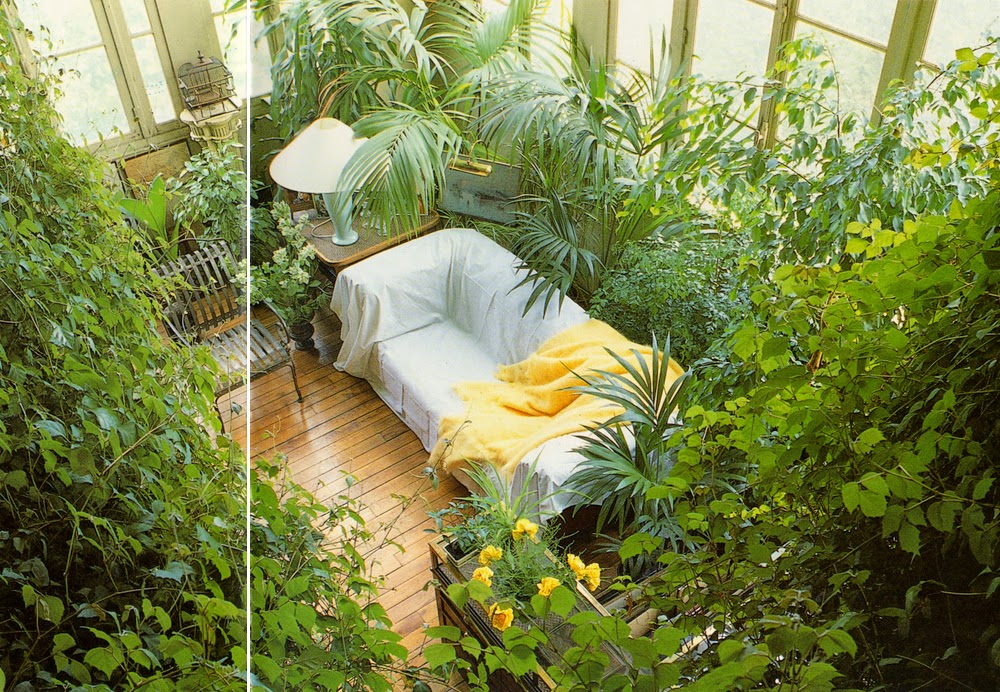 And, finally, we’d be hard-pressed to imagine a more relaxing setting for a bathtub than this: 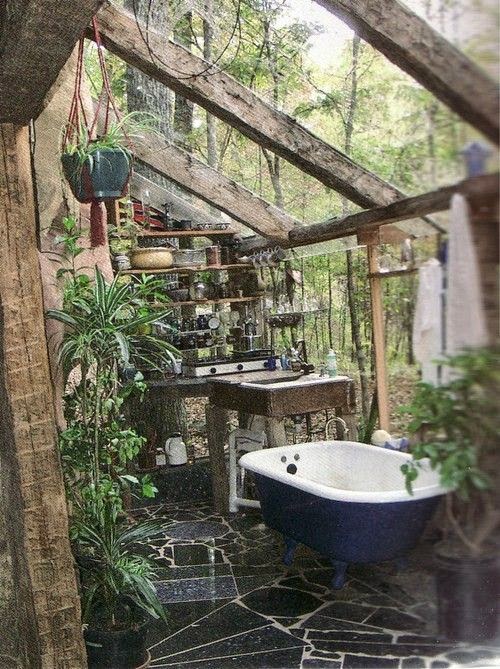 Katie is pretty smitten with that living ceiling and tiled floor in the fourth photo and Mera loves the one with the wide plank floors and the couch draped in blue.  What’s your favorite?