I sometimes think that kids and dogs can sense an essential truth about people before adults have time to shake hands. My dogs, and especially my daughter, are crazy for my friend Steve Chopp, and I’m convinced it’s because they can see the kind and gentle nature that I think of as his defining characteristic.

Steve lives in Halibut Cove, Alaska, where my parents have a summer cabin. In the years that I spent summers there running the small local ferry, Steve and I were co-presidents of HCRC – the Halibut Cove Running Club. We were also HCRC’s only members, and even though we only ran together a few times per summer, we tied for many awards.  Ever the civil servant, Steve has also appointed himself Director of Homeland Security for Halibut Cove, and alerts residents when the threat level goes from Classic Navy to Burnt Umber. 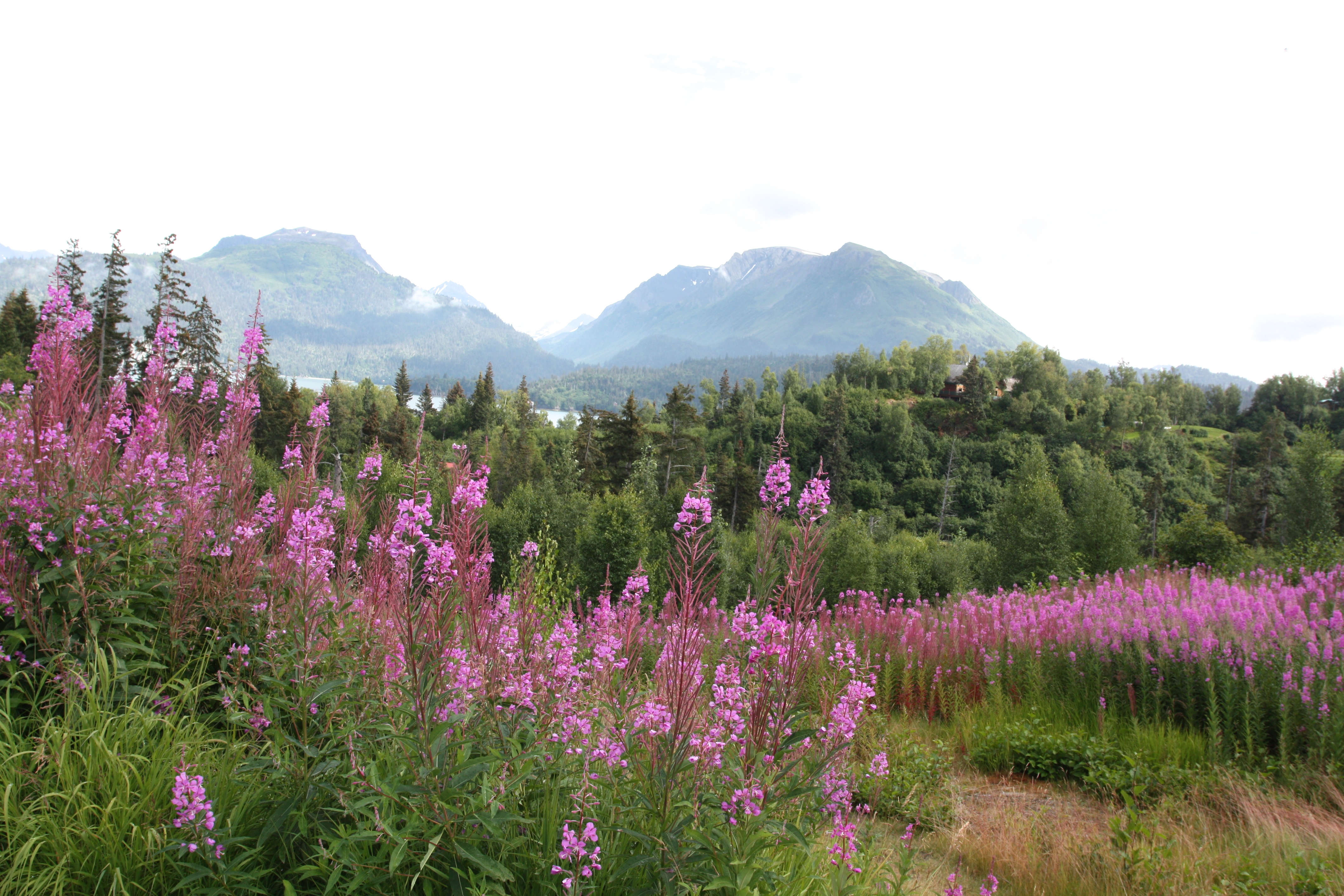 Fireweed blooming along the path to Steve’s.

When I asked Steve if I could do a cabin tour for the blog he shrugged, “sure.”  I told him don’t worry about cleaning up or anything, which in blogger speak means remove 90% of your personal belongings from sight and clean until your fingers are bloody nubbins and then put out a bowl of cherries with a few scattered on the counter (don’t let your finger stumps bleed on them!).  Steve promised he wouldn’t fret about it, and when my sister and I hiked up to his cabin the next day I was glad for reconfirmation that he is a man true to his word. 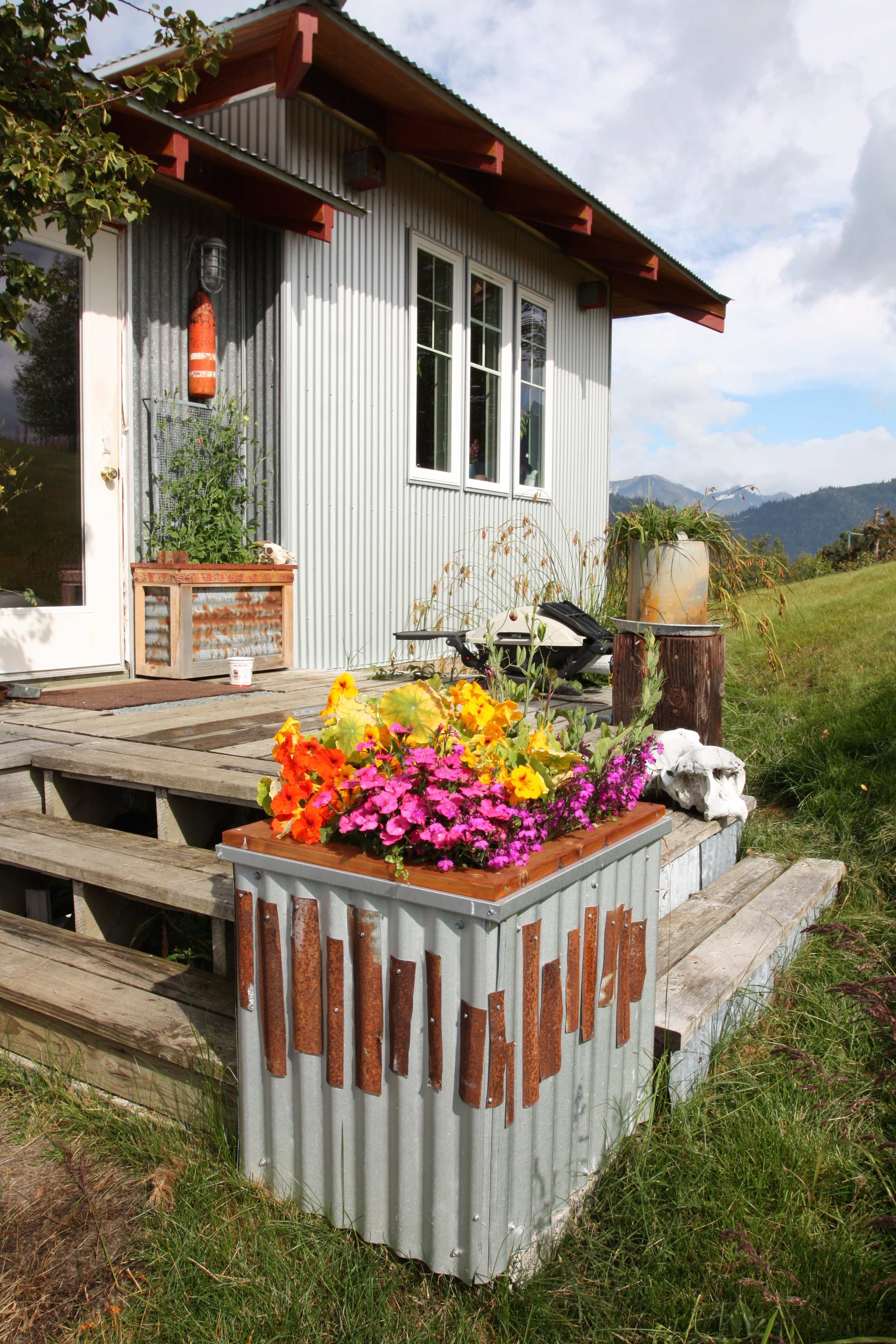 Steve built his home mostly out of salvaged and scrap materials.  The house is one room – only about 500 square feet – but everywhere you look there are small, deliberate details.  The best part is that every tiny, beautiful detail you discover comes with a story, and Steve is a great storyteller.

A tree grows through the porch, in the company of tentacle-like metal rods.

The house is completely off-the-grid.  Perched on a high cliff, it gets pretty battered by wind especially in winter but the materials Steve chose make for virtually maintenance-free living. 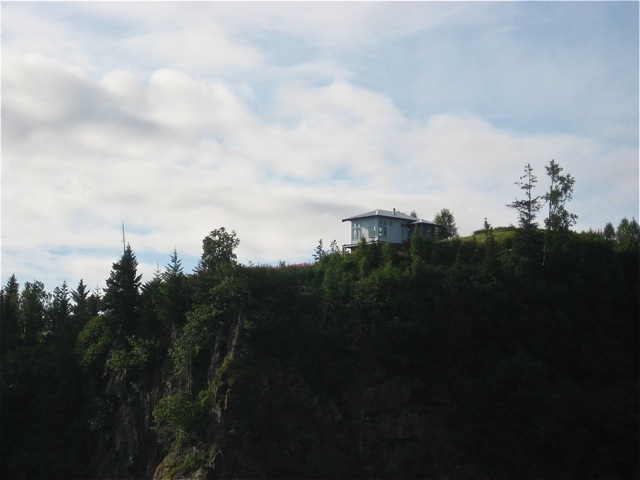 The cabin as seen from Kachemak Bay.  Photo courtesy of Steve Chopp. 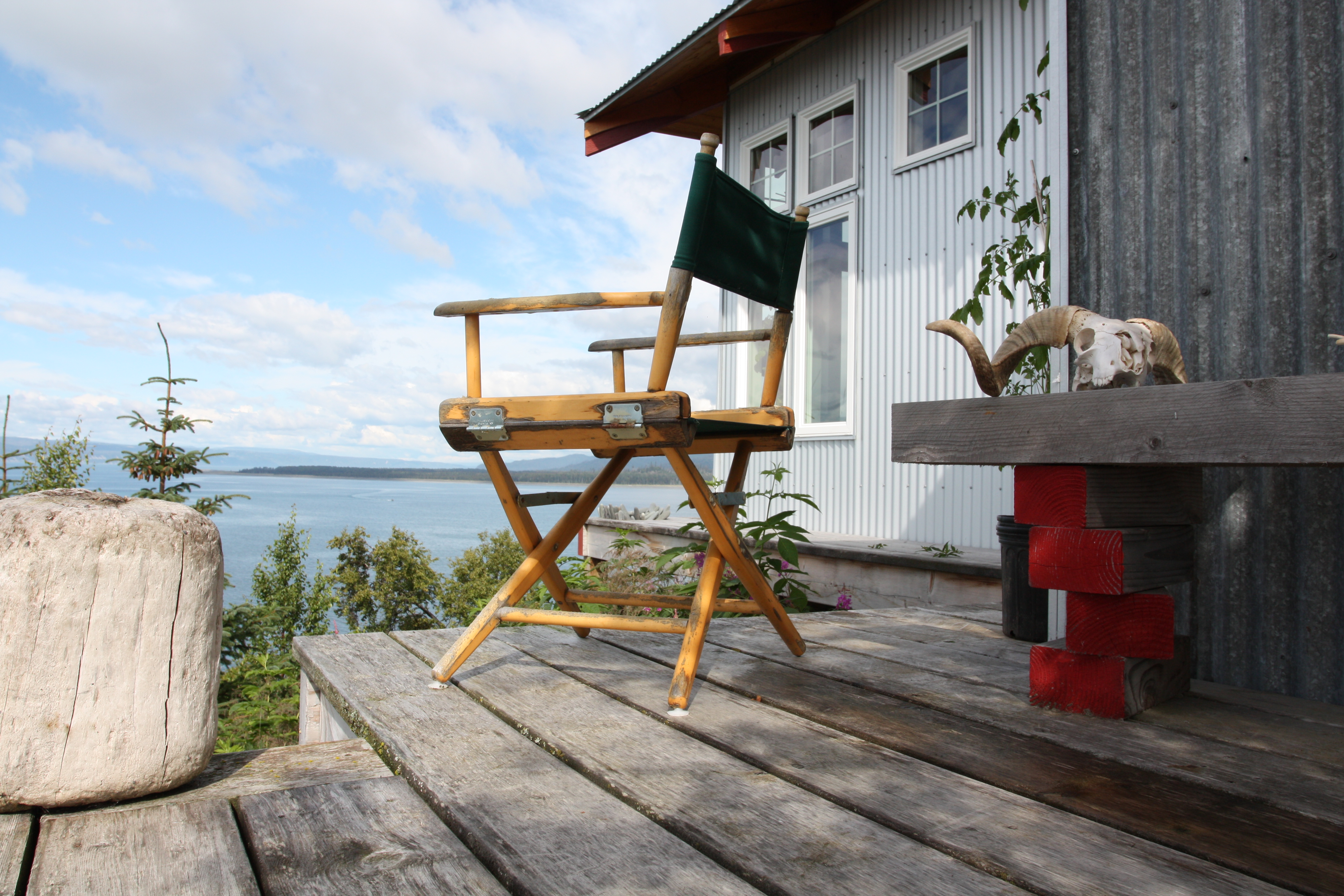 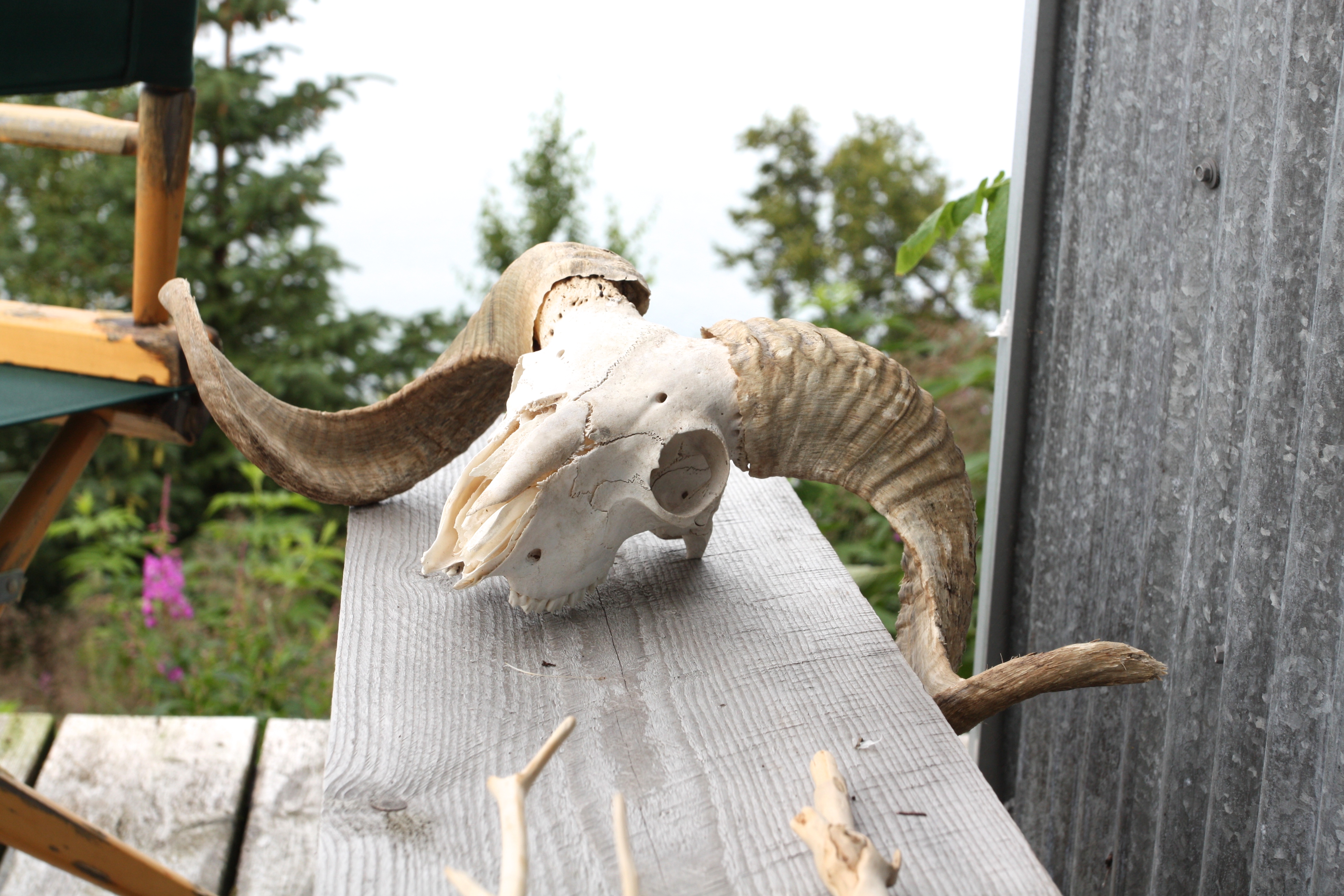 Steve made these cabinets out of salvaged wood. I’ve never seen anything like them elsewhere:  my photo does not do them justice. 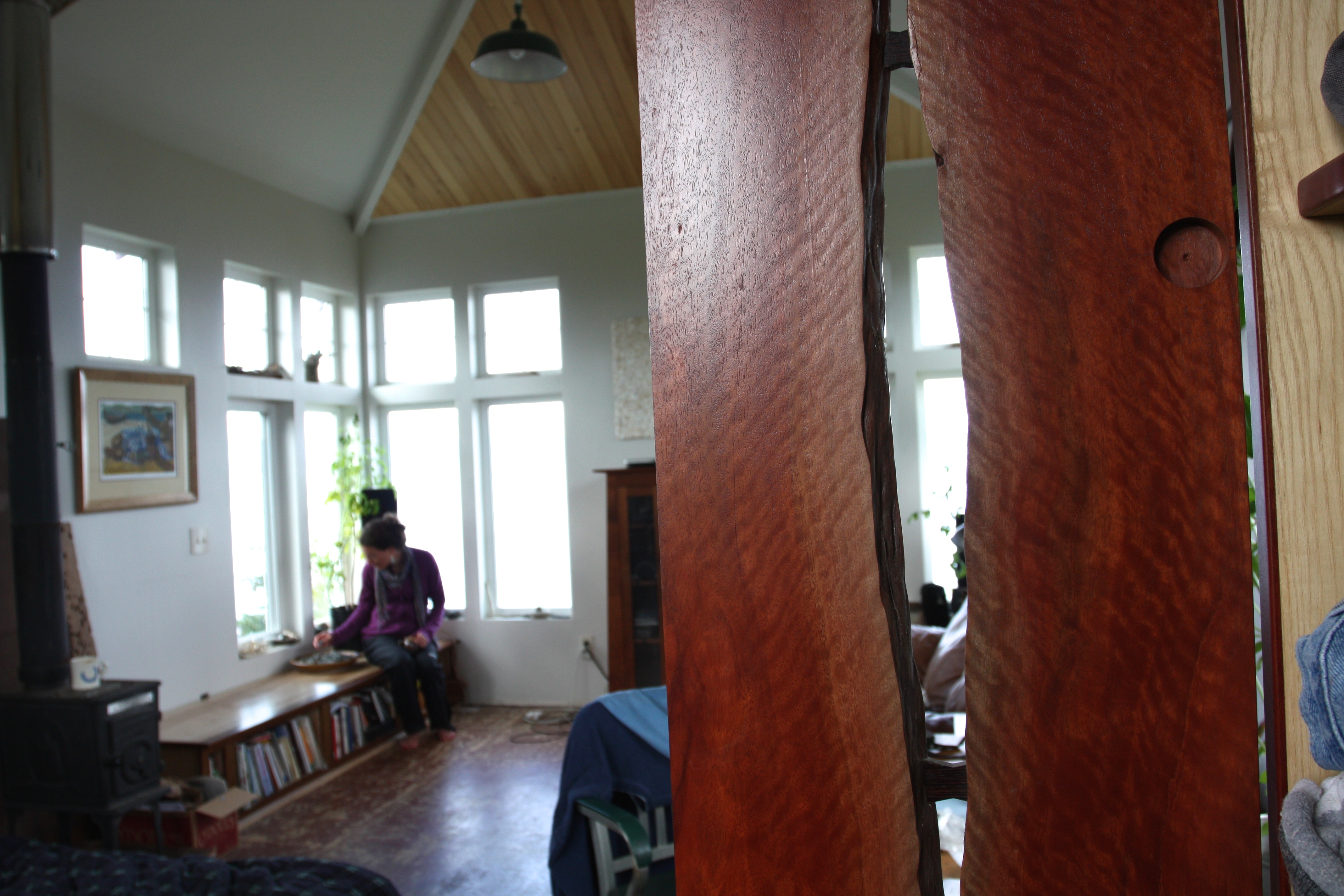 Looking through an open cabinet door to the rest of the cabin. That’s my sister in the corner, exploring a collection.

Steve is pure artist.  He’s never read Red House West (though he promises he will now) and decorating and styling aren’t his bag.  His materials are things that he has found and collected, mostly on the rocky tidal swept beaches near his home.  He’ll collect, for example, sea-bleached vertebrae of various animals for years, keeping them in a cardboard box in his living room, while loose ideas for sculptures or light fixtures solidify in his mind. 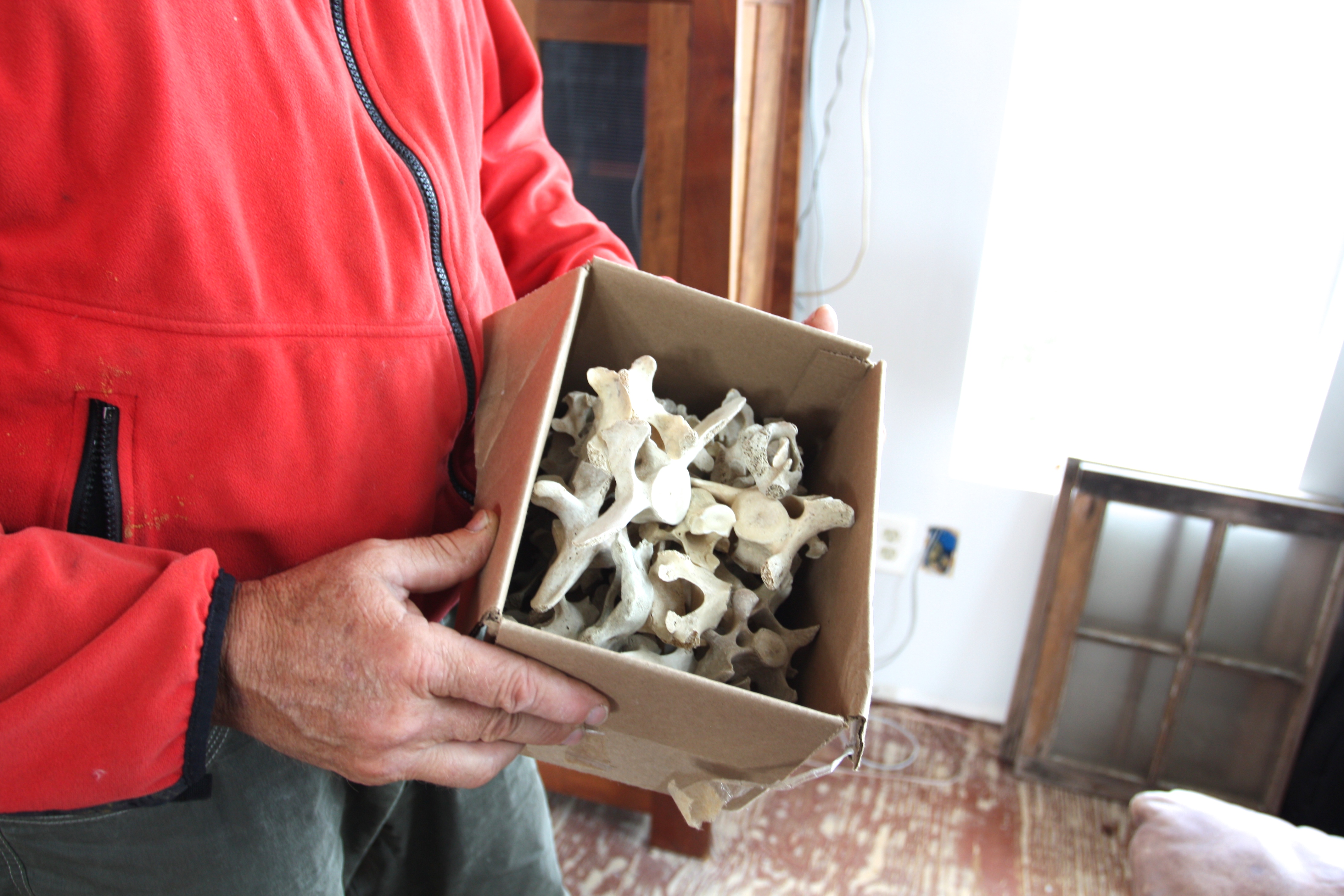 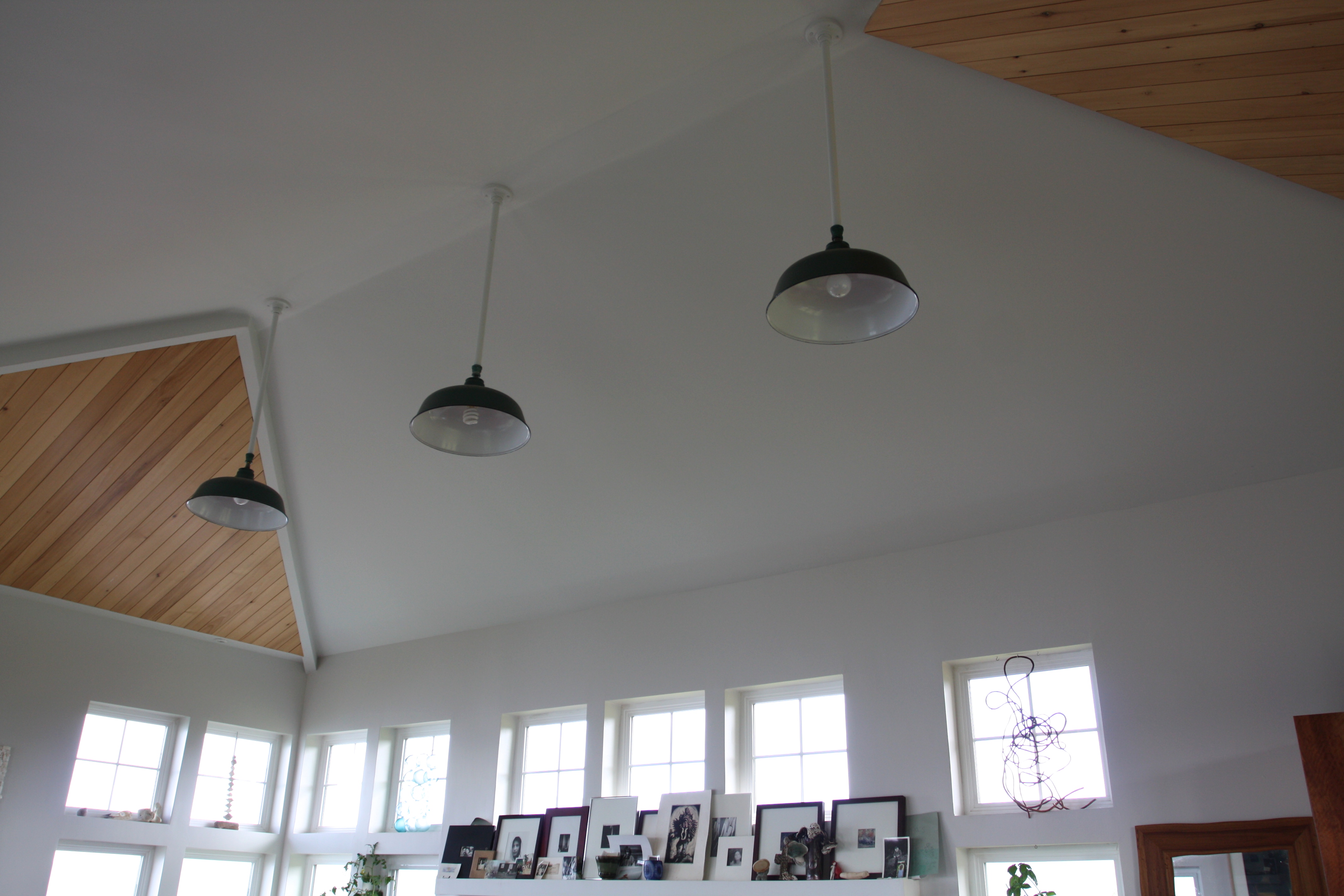 Steve salvaged these lights from an old cannery. 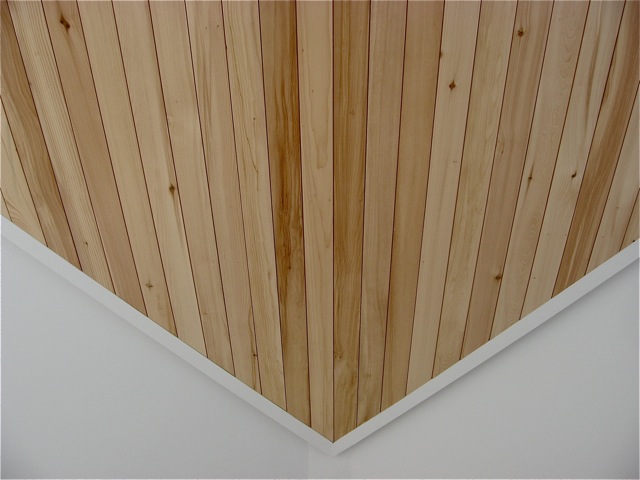 Steve was a commercial fisherman in Bristol Bay for years, and during down time he would go ashore to sandy beaches where he would take his shoes off and feel for Japanese glass fishing floats buried under the sand.  He’s given away a lot of his collection, but he’s also turned some into sculptures for his own home. 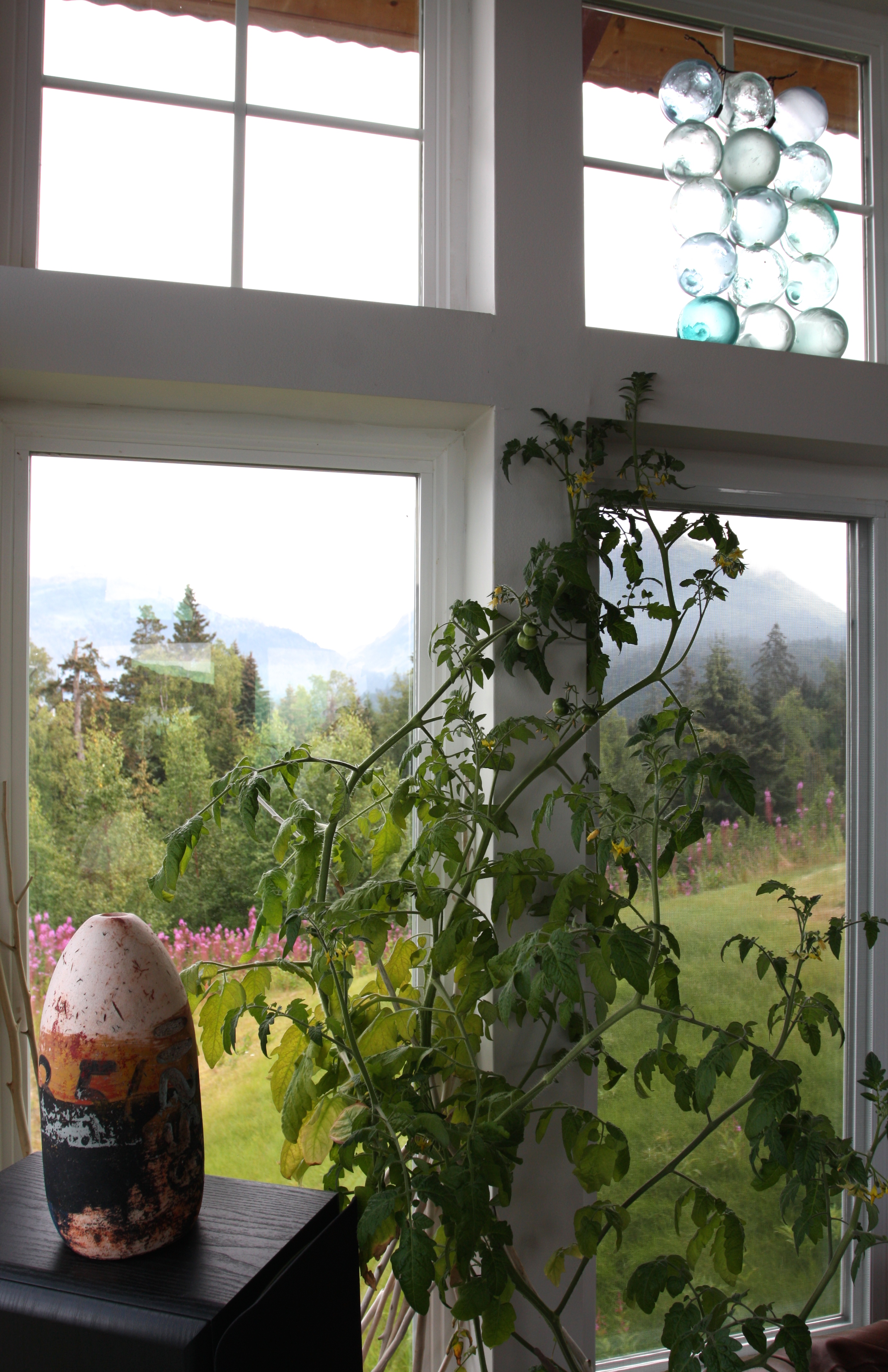 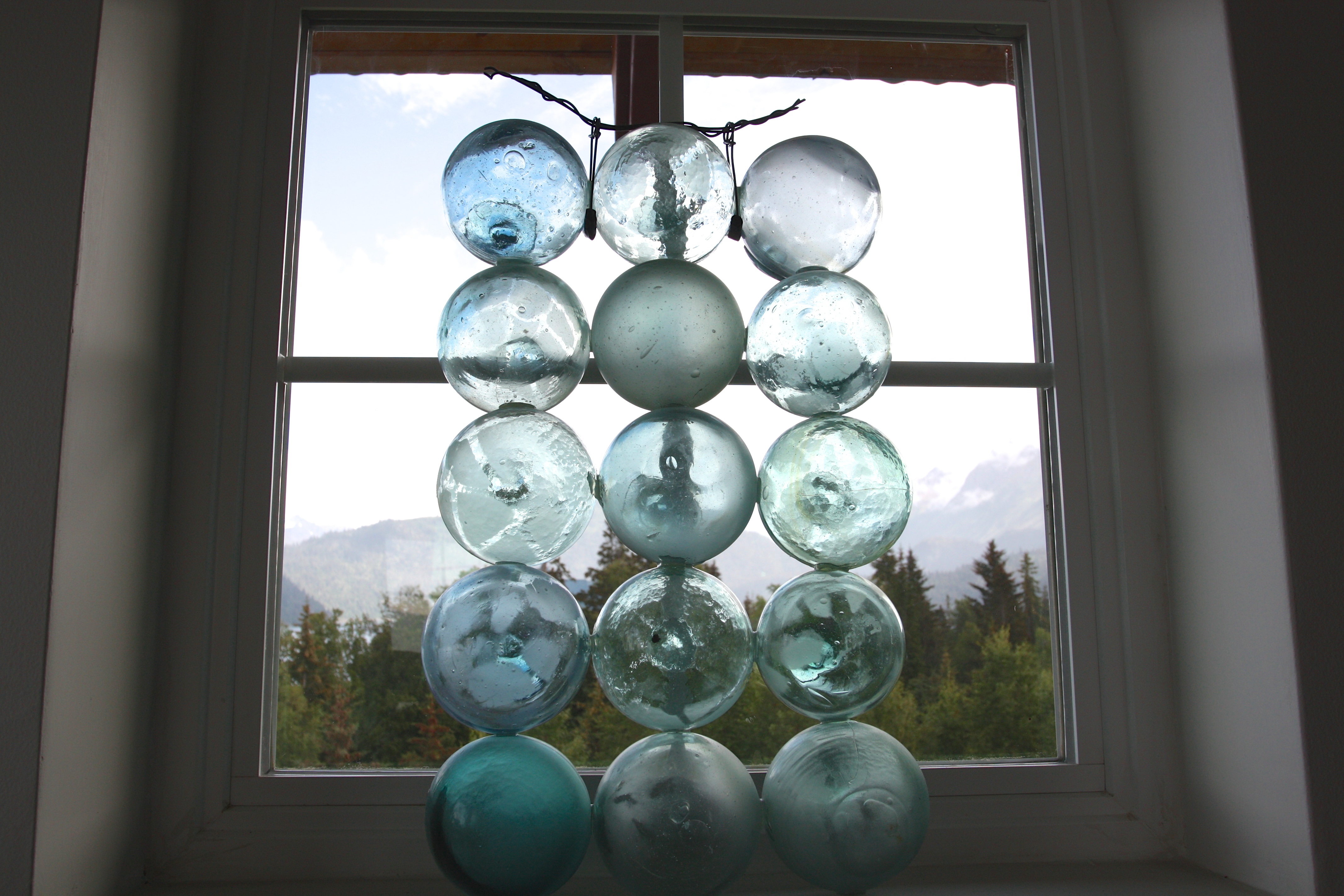 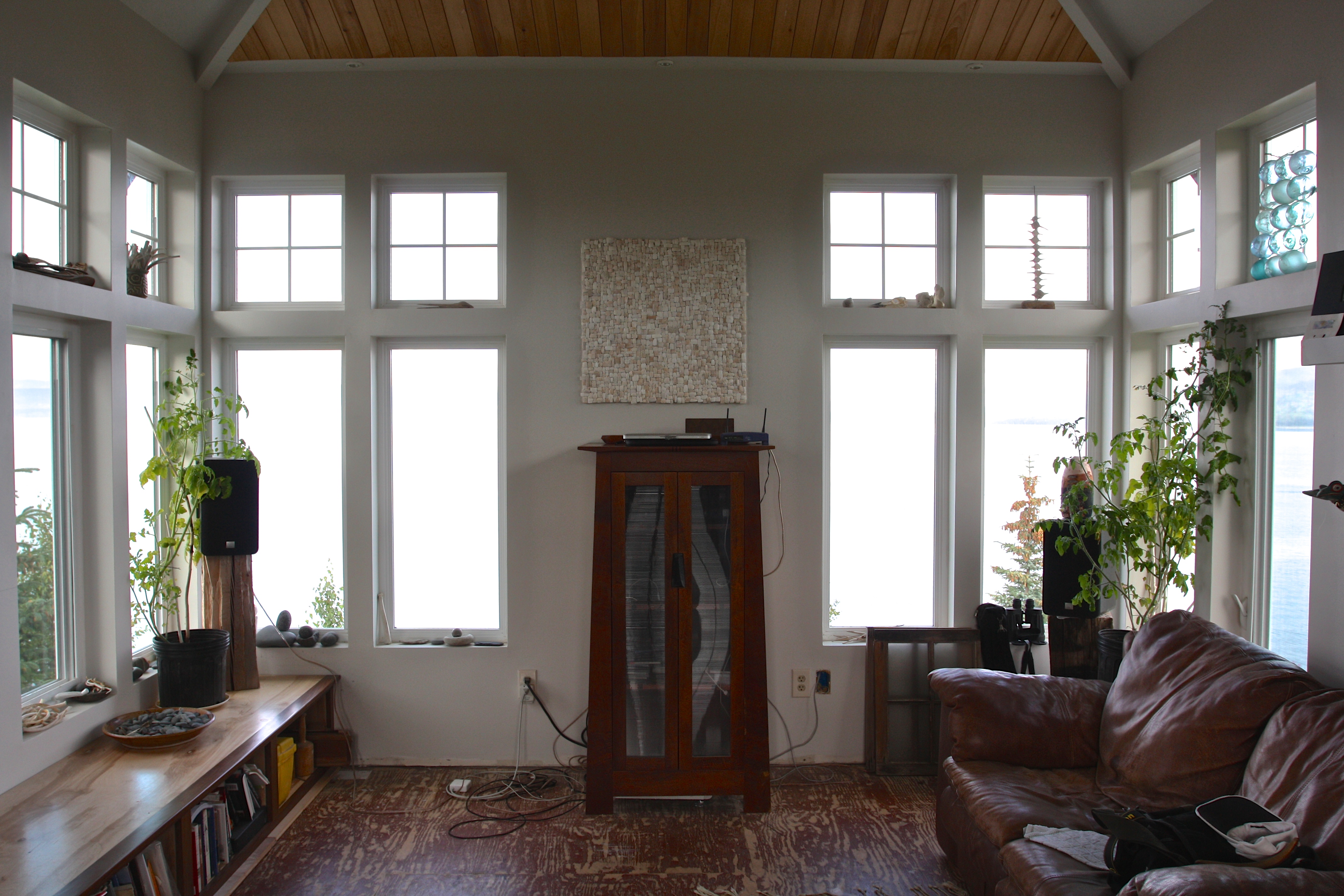 This art above the cabinet (which Steve also made) is clam shells that he sanded down into squares and rectangles and then glued directly to the wall. The effect in person is subtle but stunning. 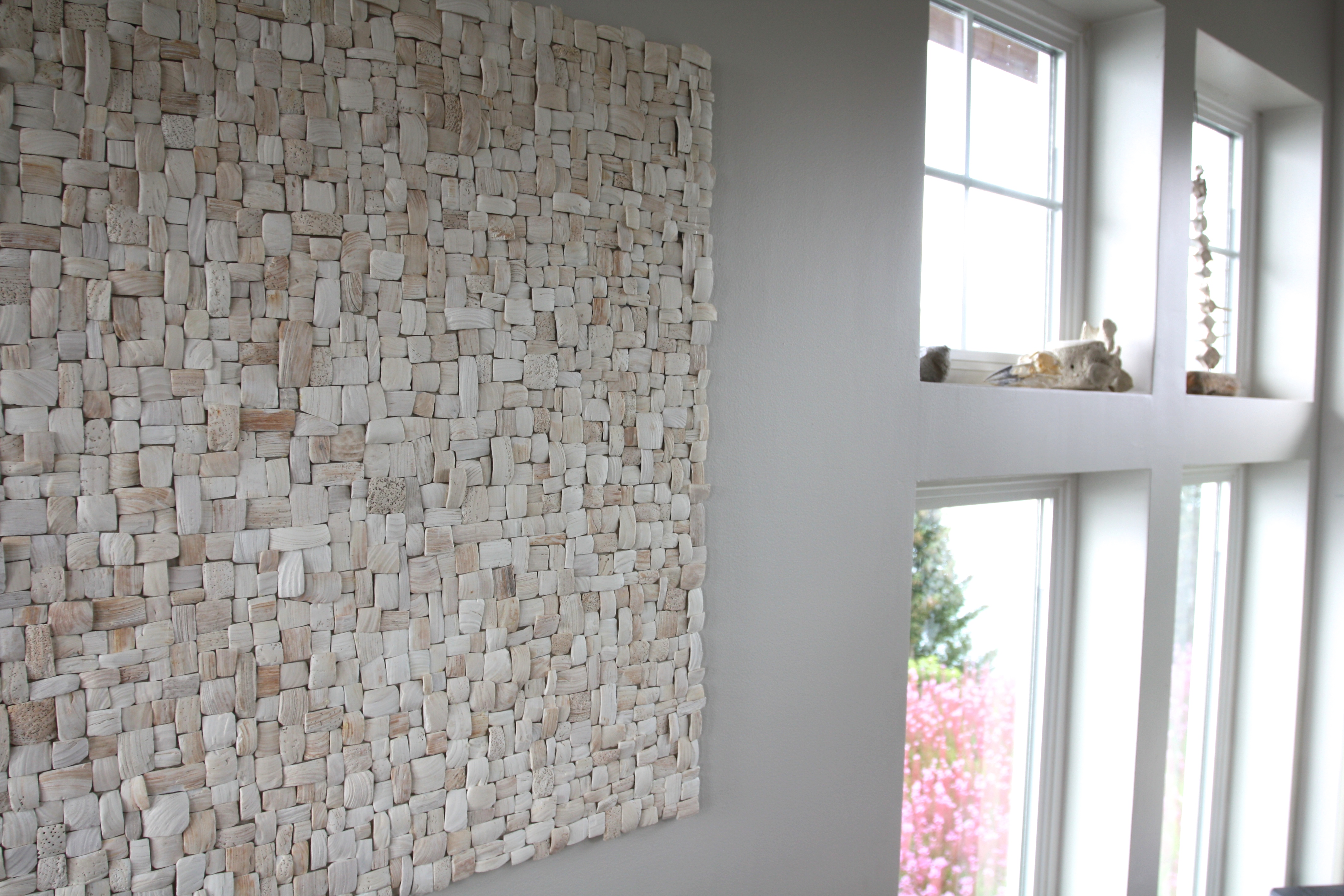 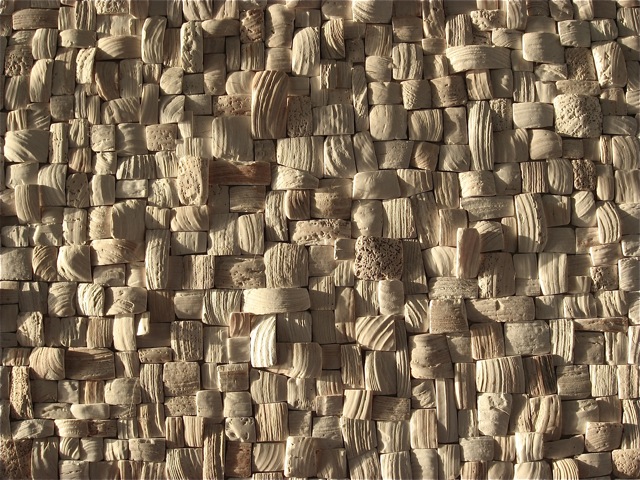 Detail from the clam shell sculpture in the setting sun. Photo courtesy of Steve Chopp.

And then of course there’s the view, which my photos really didn’t capture. 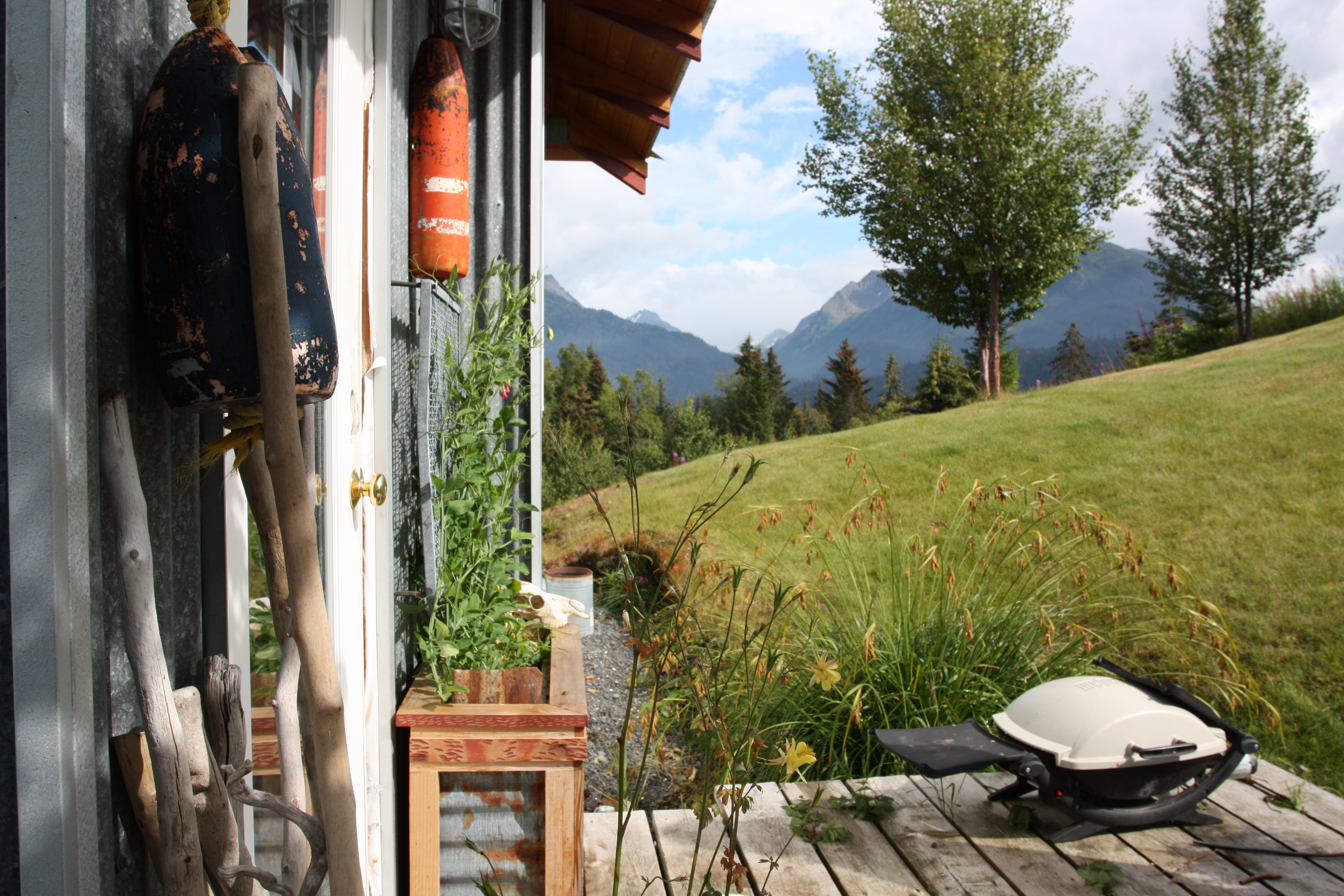 Huge thanks to Steve for letting me share his amazing home here on Red House West, and thanks to you for reading along!  Check back in on Friday for our monthly DIY roundup!

30 responses on “Off-The-Grid Cabin Tour: A Visit With My Friend Steve”