I recently (with a lot of urging and support from Mera) applied for a position writing house tours for the venerable blog Design*Sponge, and the final stage of the hiring process is to write a house tour of a place that has never been shared on the internet before.  The timeline for this submission was short – I found out I was a finalist just over a week ago – but luckily I have family nearby who were willing to let me invade their beautiful space to take photos!

Since D*S is interested in getting a sense of my writer’s voice, and presumably I’d be writing tours of homes belonging to people I’m not related to, I’ve opted to replace “mom and stepdad” with Susan and Terry. I’ve also omitted our names, but Red House West readers just might recognize a certain thriftstore-loving daughter and a handy son-in-law.

A Studio-Guesthouse in the Oregon Woods

Terry, a chemical engineer, published poet, and erstwhile ceramicist, and Susan, a retired teacher and writer, live on the banks of the McKenzie River in the deep green Oregon woods.  For more than a decade Terry used a moldy, damp cabin on the back of their property as his company’s home base.  When conditions in the decrepit cabin became truly untenable (picture a sodden structure cowering beneath a tarp during the onslaught of Oregon’s winter rain), he and Susan employed the help of local architects and craftspeople to build a space to serve not only as an office but also – to the great delight of their six grown children and eight grandchildren – as a guesthouse. 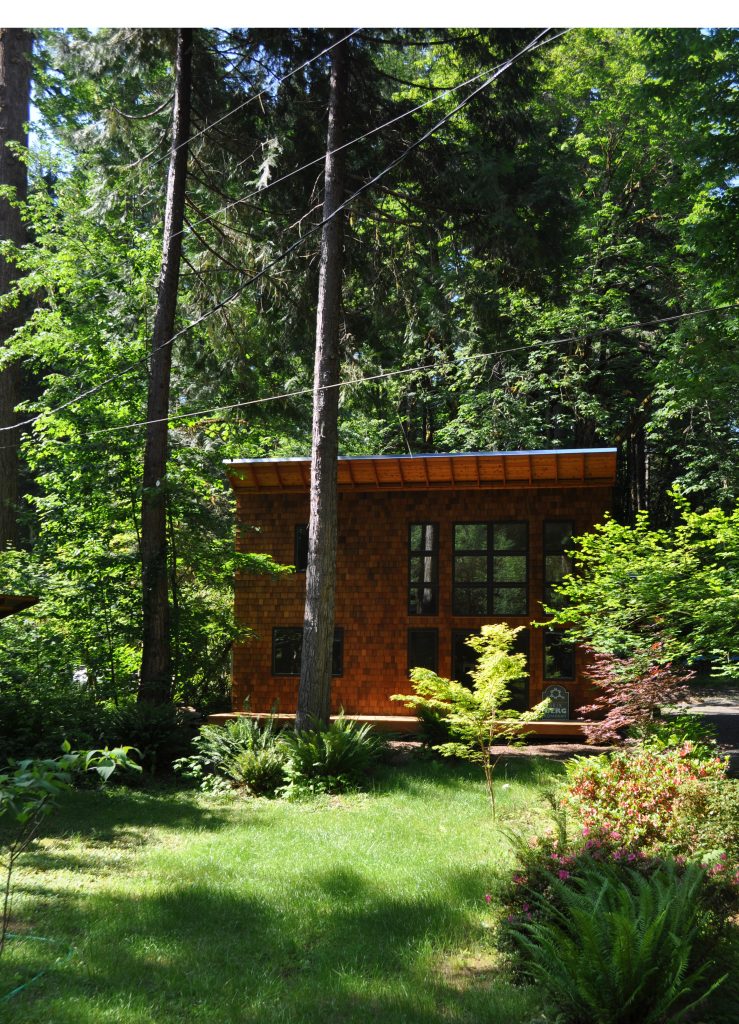 The height of the windows was designed to frame Eagle Rock, a tall monolith on the river’s opposite bank.  A library ladder provides access to both a sleeping loft and the upper shelves, which house a mix of Terry’s own ceramics – made with a chemist’s delight at the alchemy of glaze – and art collected both locally and abroad.  The thrifted stools make for a comfortable work perch at the computer.

Tongue and groove fir subfloor with beveled edges was an economical and durable choice that melds well with the mix of modern and rustic elements.  The vintage Ekornes chair was a gift from longtime friends; their daughter brought the wool throw back from Ireland. 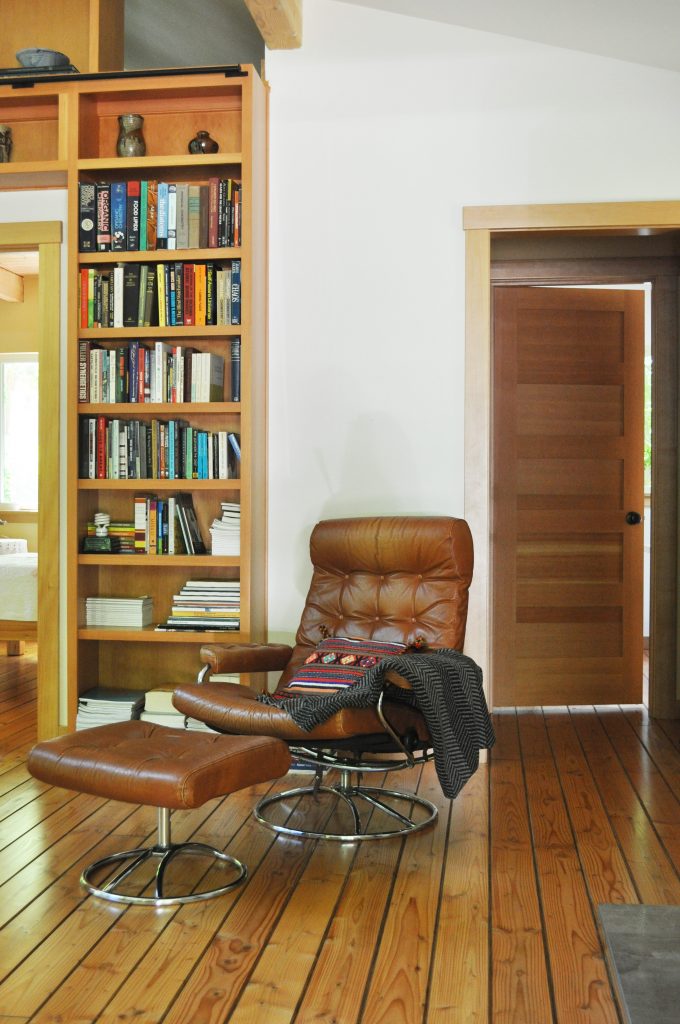 The bedroom was originally conceived as a ceramics studio, but sleeping space for the clamoring hordes of children won out.  For now, anyway. 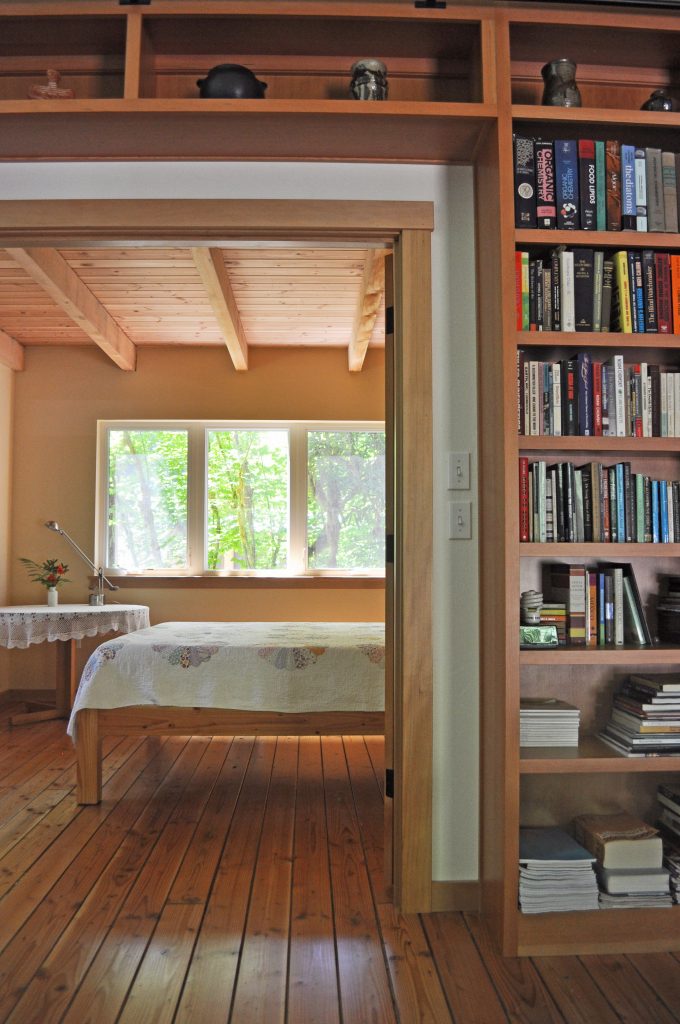 Glass-paned french doors open into the cozy bedroom.  Susan chose the golden paint so it would be a warm, sunny hug during the sometimes bleak Oregon winters. 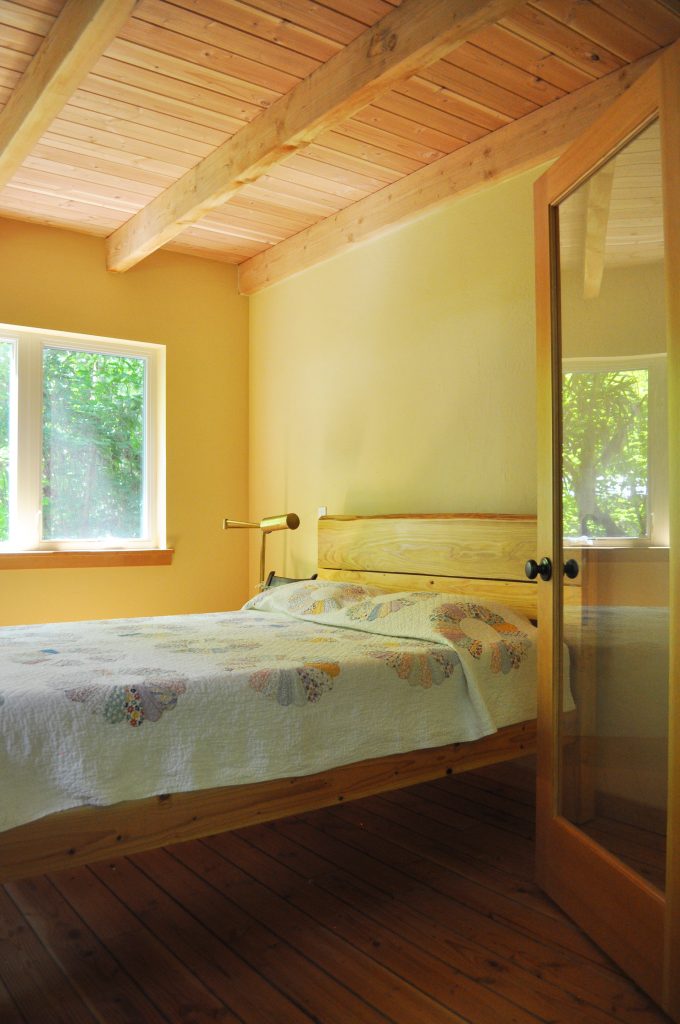 The quilt was made by Susan’s grandmother, the 18th century chair was given to her by her mother, and the bed was built by their son-in-law. 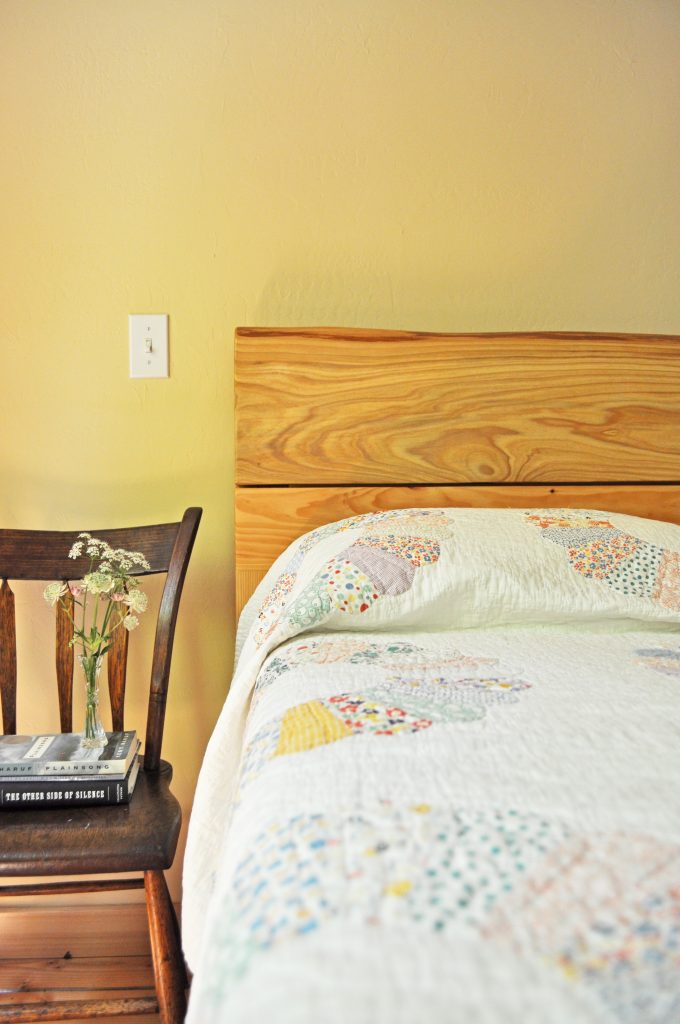 The color scheme of the bathroom is deliberately simple to highlight the abundant green outside the windows.  Susan and her daughter found the industrial sewing machine base amidst the rubble of a nearby antique shop and Mike, a local craftsman, fashioned the top.  The mirror is from a thrift store and the sconces are from Schoolhouse Electric. 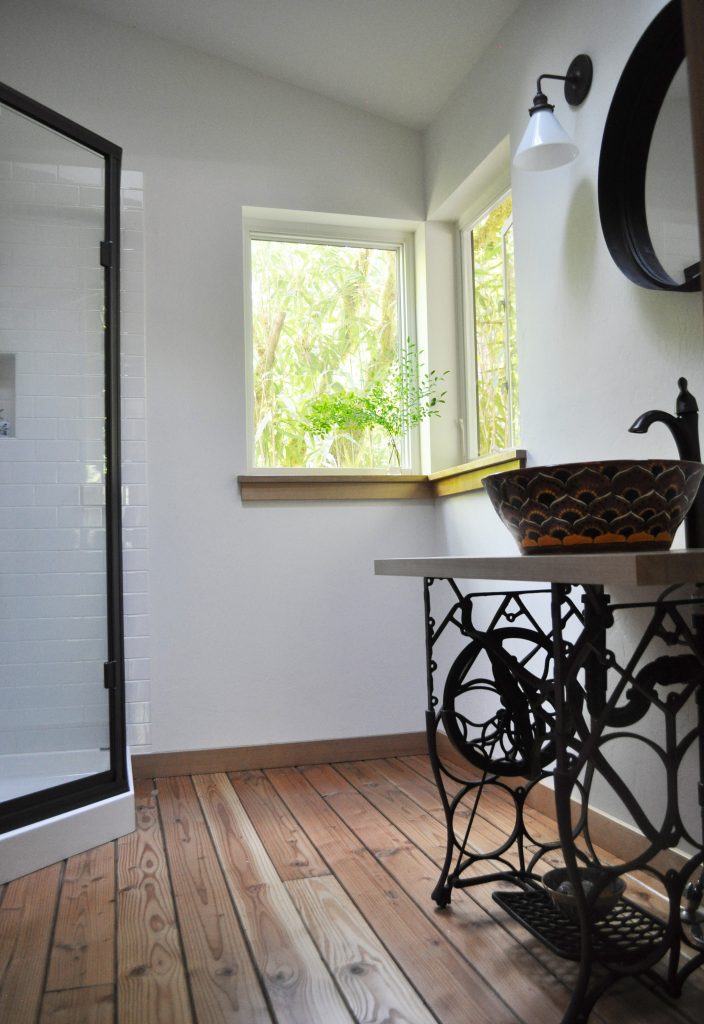 The Talavera sink, purchased on eBay, lends a spot of color to an otherwise neutral space. 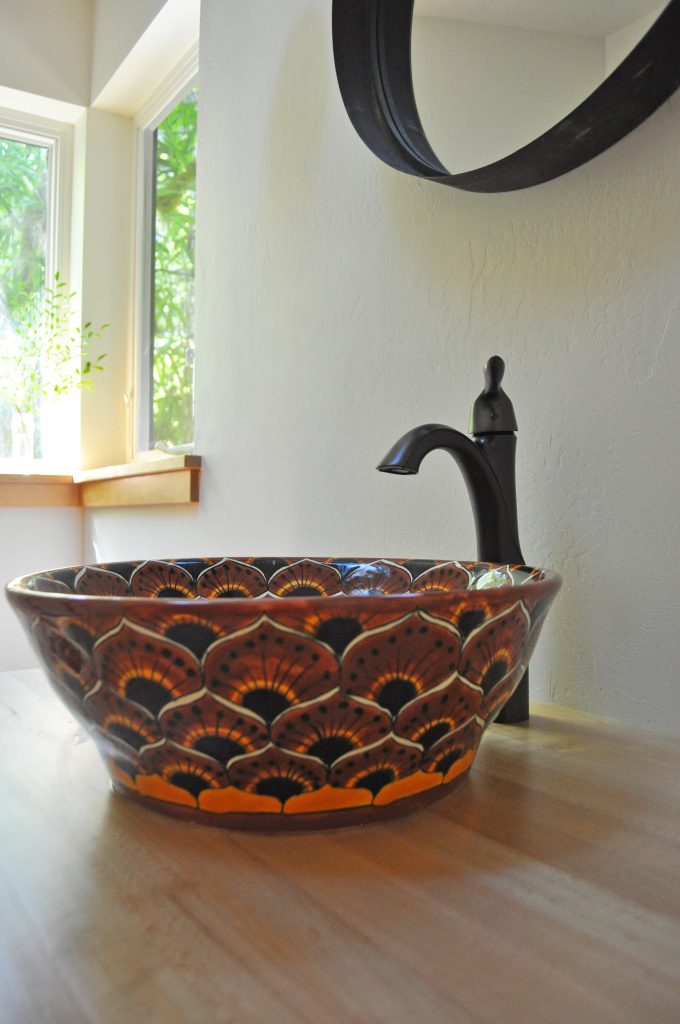 The electric candles were originally placed in the window as a holiday decoration, but now provide a welcoming beacon year-round. 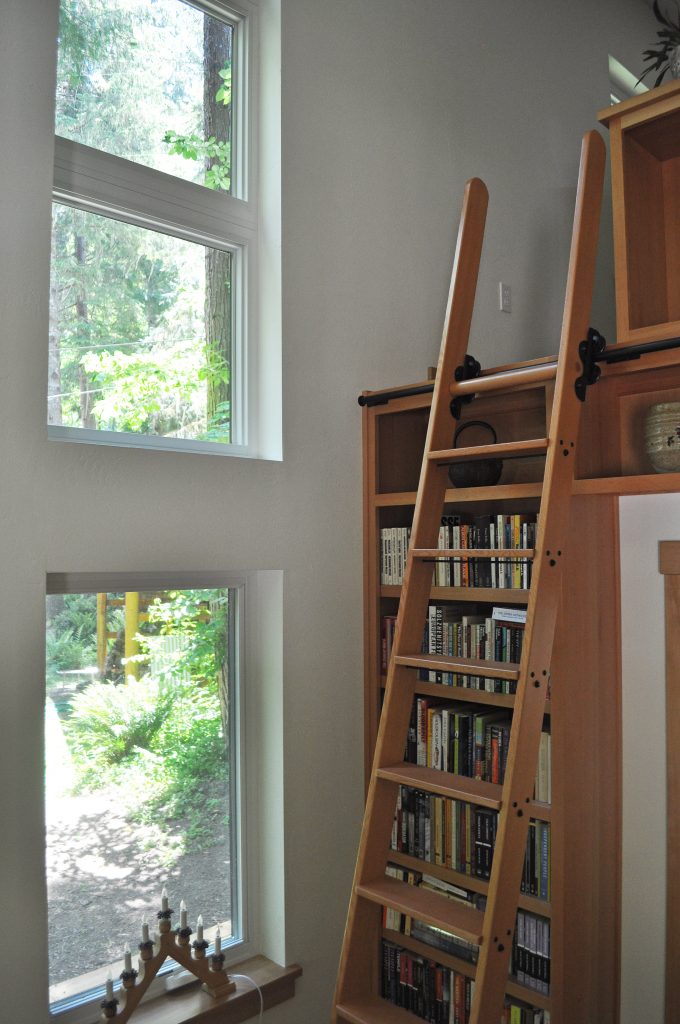 Terry and Susan plan to add plush rugs and maybe bean bags to the loft, but it’s already a favorite place for the older grandkids to roll out sleeping bags and stay the night. 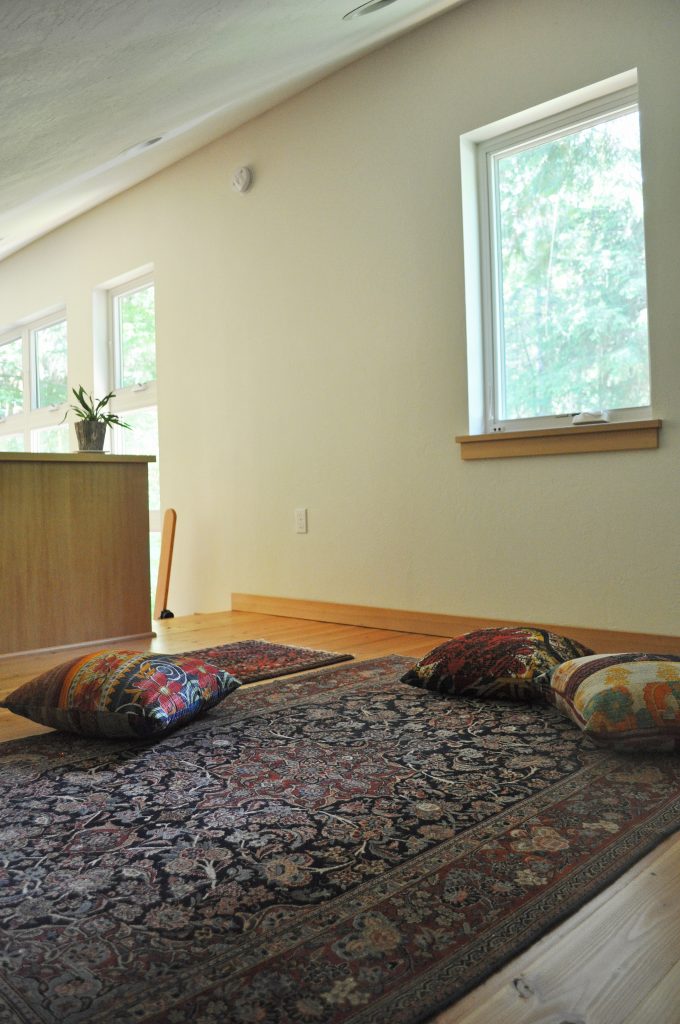 An eagle’s eye view from the loft shows the small kitchenette and a wood stove perched atop smooth grey slate. 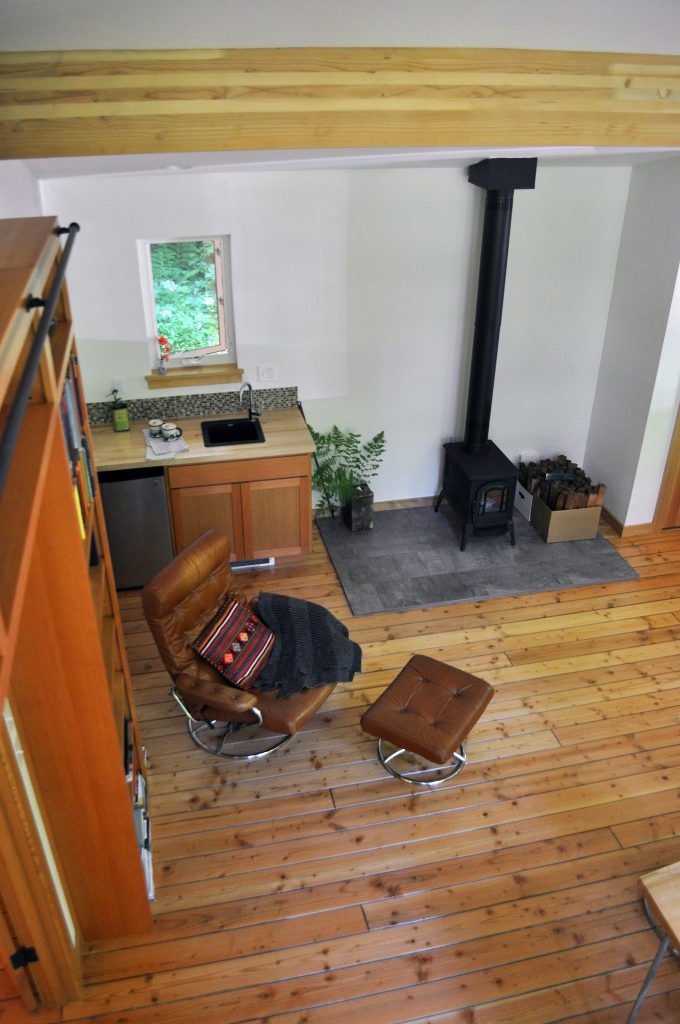 A view of Eagle Rock. 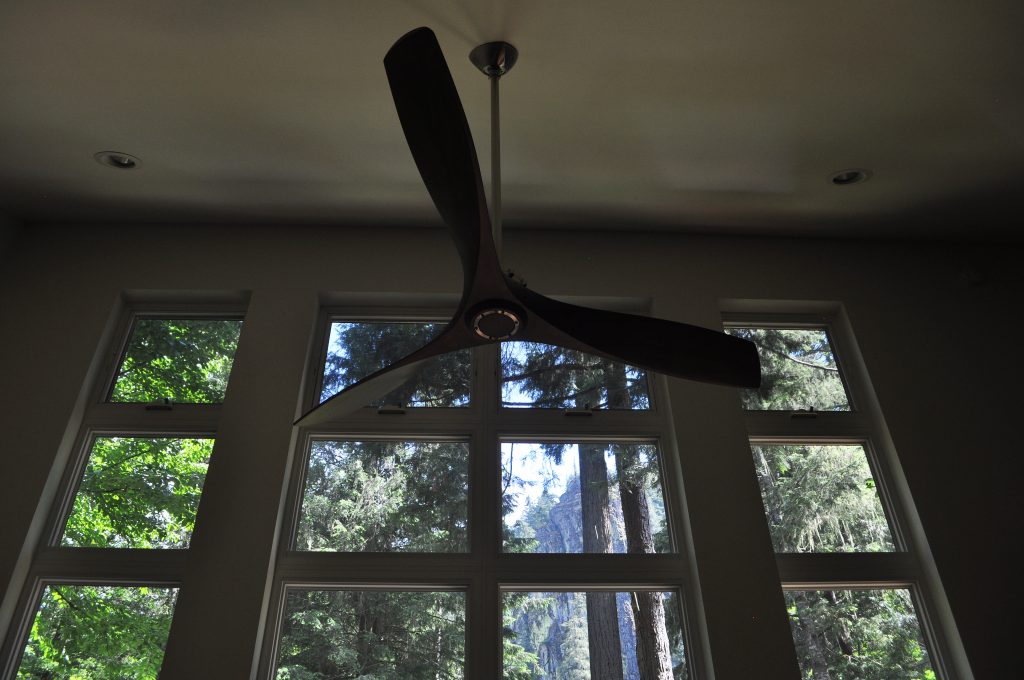 A portrait from six year-old granddaughter Sadie, and what Terry loves most about his space (itemized in true scientist fashion):

a.) The view of Eagle Rock is like stepping into a spaceship ready for liftoff.

b.) The ladder is my own steps straight to heaven complete with books and art.

c.) It’s the place to camp out (in) with three granddaughters! 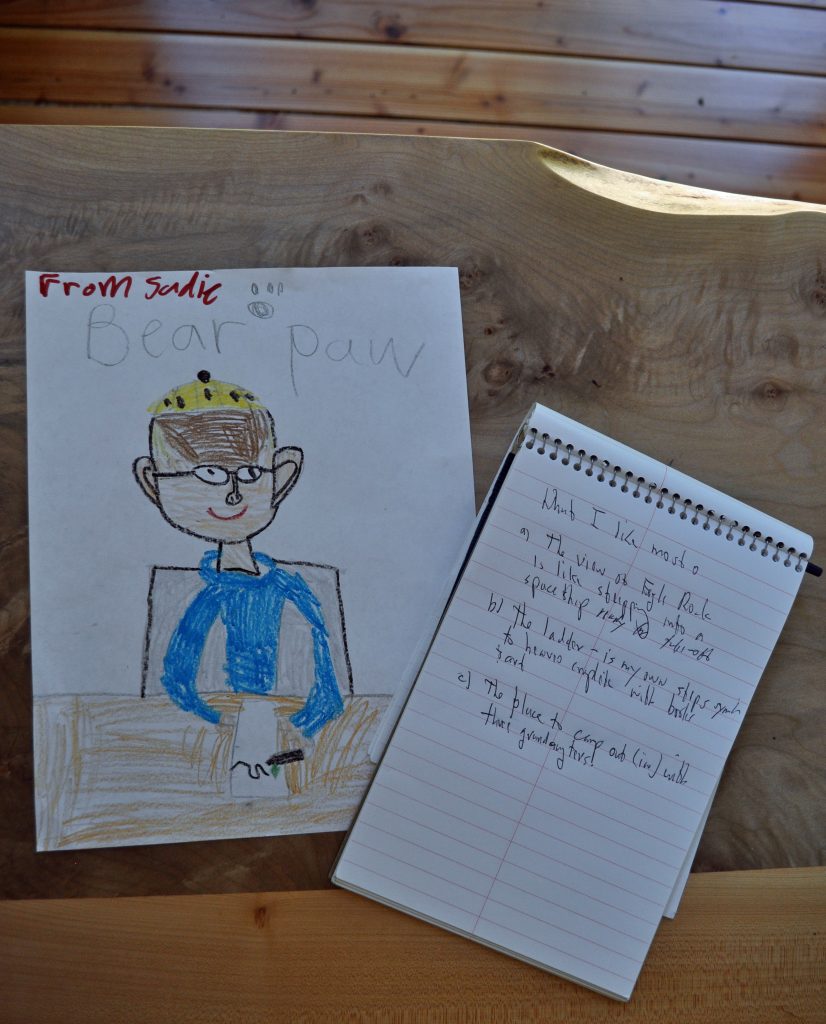 Isn’t it a cool space? Cameron and I fantasize about using the plans to build our own place just like it. A slightly bigger kitchen, and I think it’s a perfect size for two.

Also! I know we’re in the midst of decorating John’s blank slate, and don’t worry! Mera and I will be back with textiles and art for his space next week; we’re really excited to show you what we’ve come up with!

14 responses on “A Studio-Guesthouse in the Oregon Woods”