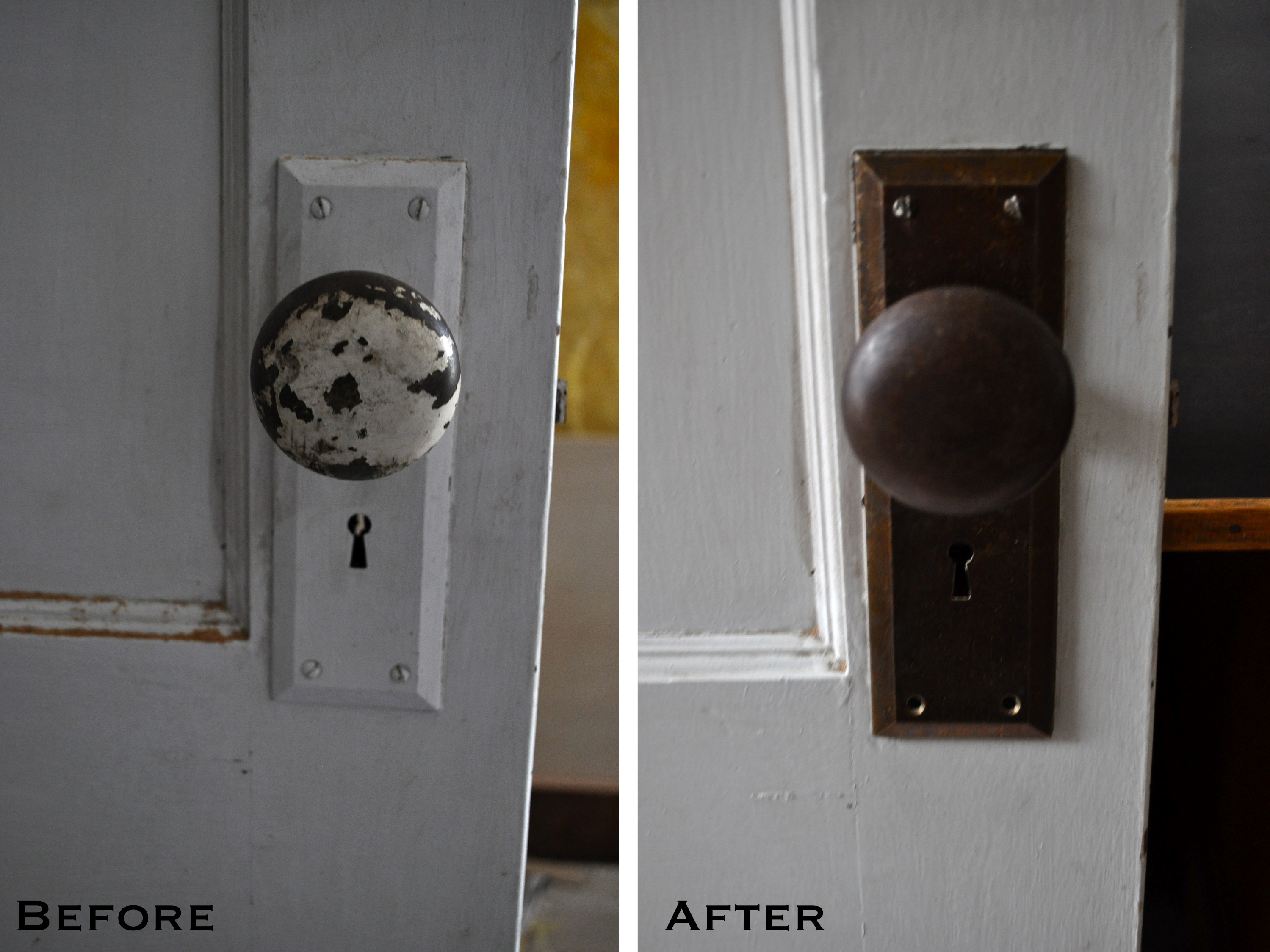 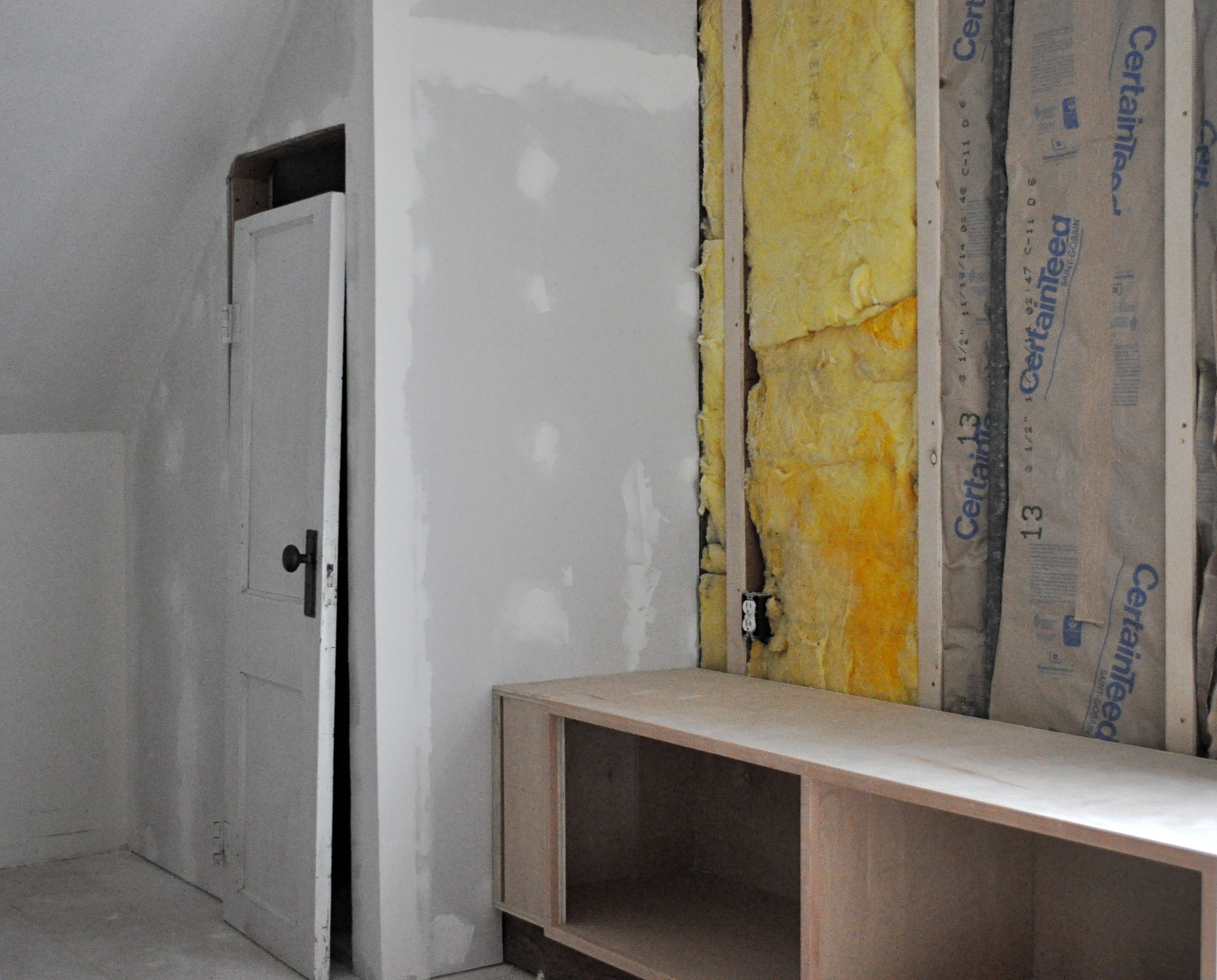 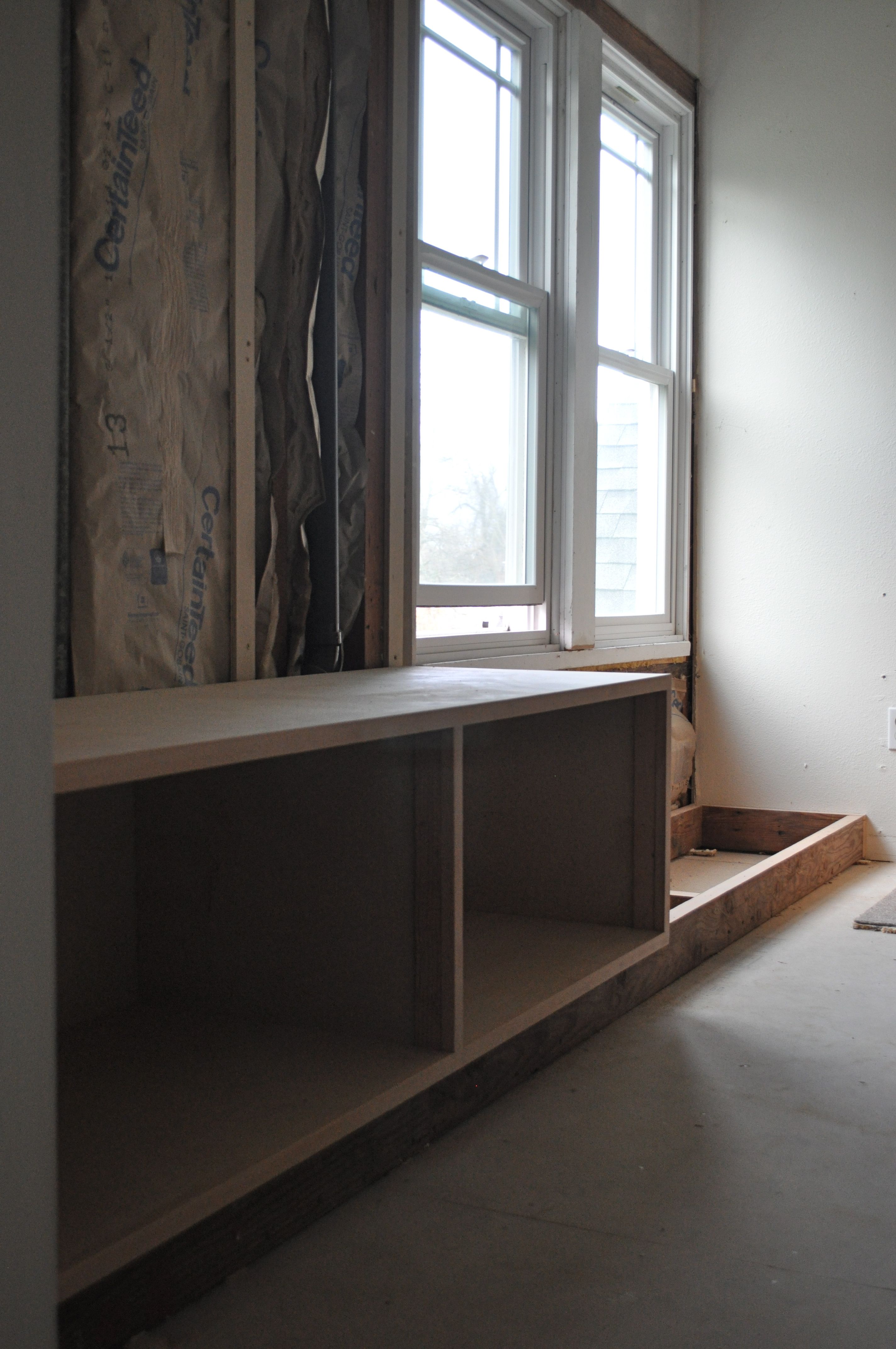 Today we are venturing into a room in our house that few visitors (and certainly no blog readers) have ever seen.  Since we moved in two years ago, it has essentially been a large and chaotic storage room (and a source of shame).  But no more.  Today, readers, begins our journey of redemption.  Today we enter the Chamber of Secrets. 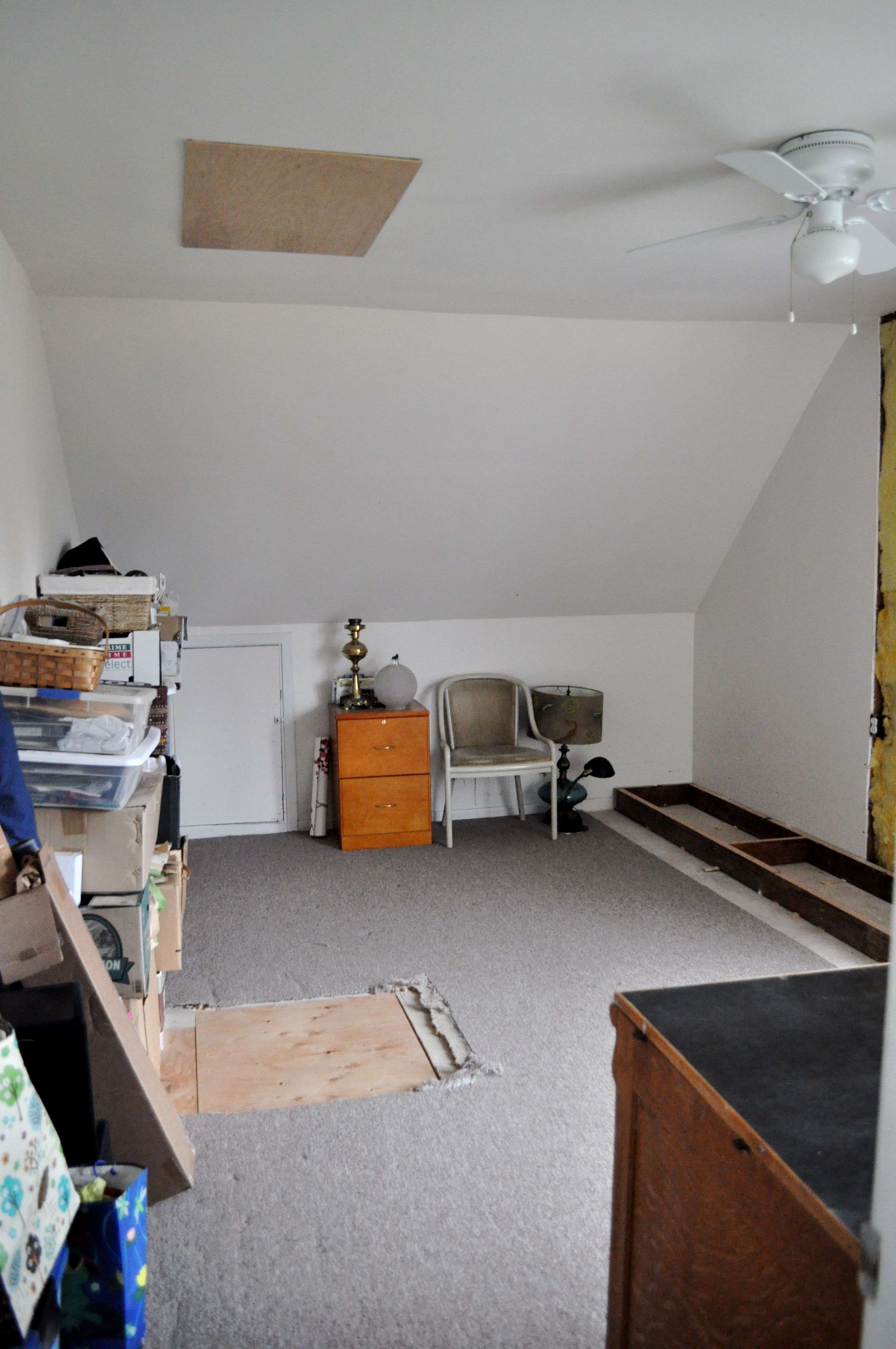 Oy, teetering stacks of books and craft supplies, ugly carpet, furniture in need of repair and . . . is that exposed insulation, you ask?  Why are there squares of plywood on the floor and ceiling, you query?  And well you might.  To answer the first of those two very valid questions we must first go back in time, to when this happened. 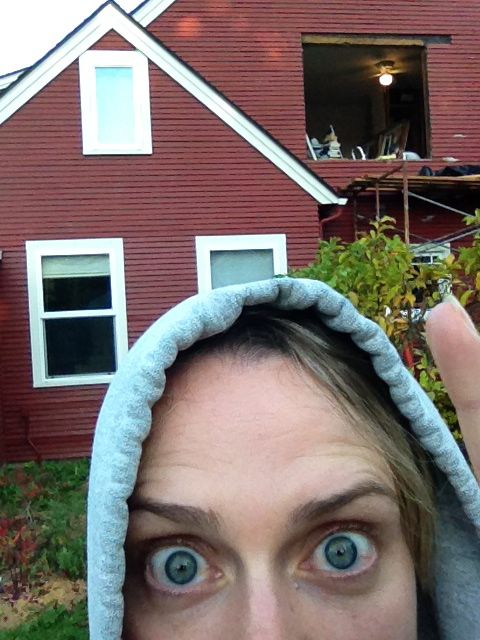 It started one morning after a monsoon-level rainstorm, when we noticed a large, water-filled bubble on the ceiling of our downstairs bathroom.  It proceeded with the removal of a square of ceiling which led to the discovery of water leaking from an ancient and monstrous cast iron pipe.  Turns out that said pipe was a venting pipe that exited through the roof, acting as a catchment system for rainwater, which would then come down through the walls and – leaking from the pipe’s rusted out elbow – through our bathroom ceiling.

So we replaced it, a herculean task that required pulling two stories worth of massive pipe up and out through the wall.  Resulting in the missing drywall pictured above.  And once it was removed?  We saw the window had been poorly installed and water was getting in, so Cameron took it out, re-framed it, and put it back in. 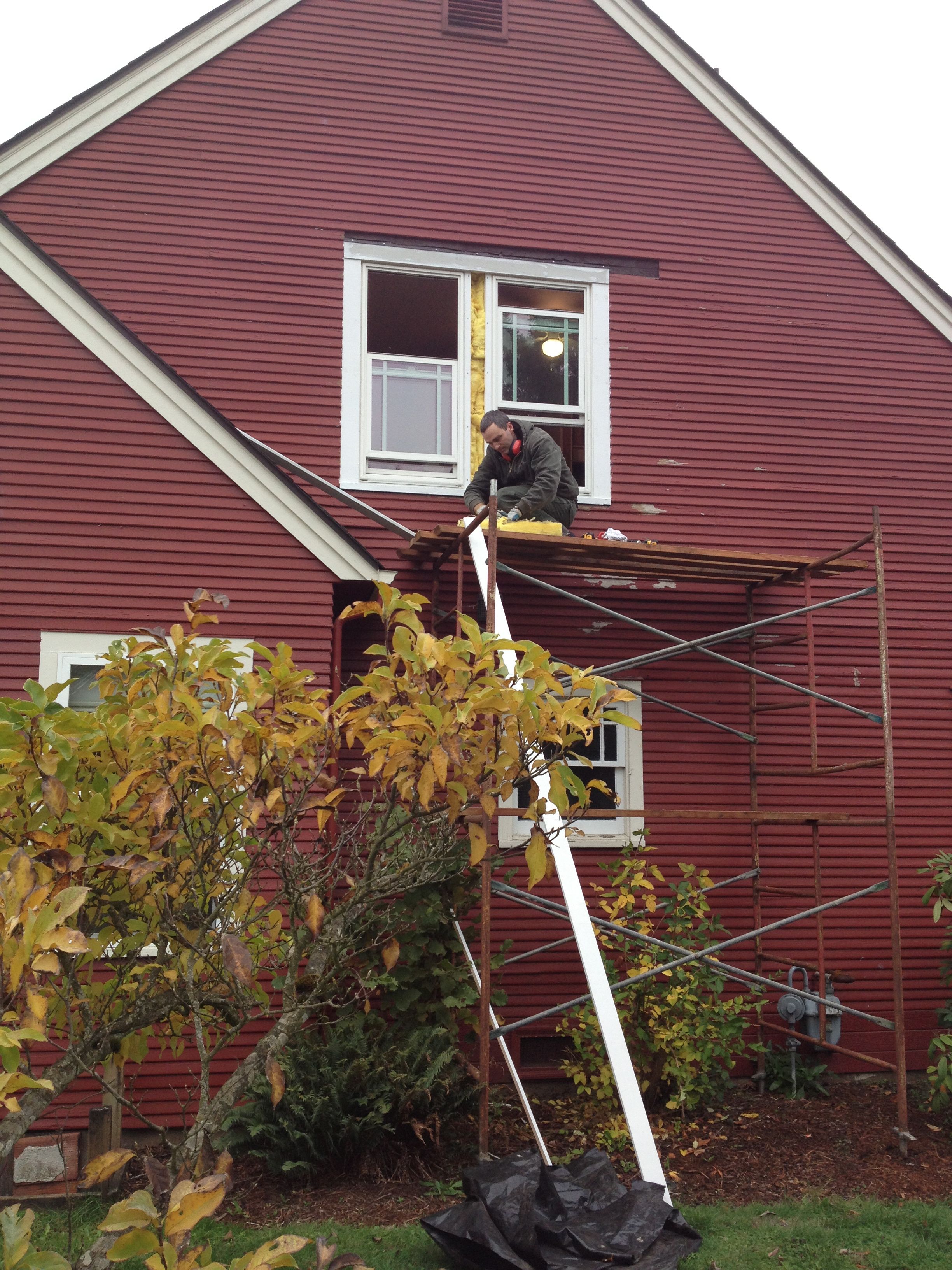 So that explains the missing drywall, but how about the plywood squares?  And to answer that question dear readers, I must show you one of the worst ‘before’ photos in the history of the World Wide Web.  In my defense, it was taken in the olden days before the existence of organization or cameras that focus.

Sharing this has some cathartic value for me.  Thank you.

Heavens to Betsy.  But!  It shows the origin of those plywood pieces, so it’s worth it.  Back in the day (pre-1960s), a chimney ran up and through that drywalled column in the center of the room.  When we bought the house the chimney was long gone and the previous owners had scabbed some shelving into the remaining structure.  It was neither pretty nor functional, so we decided to take it out.  Leaving us here: 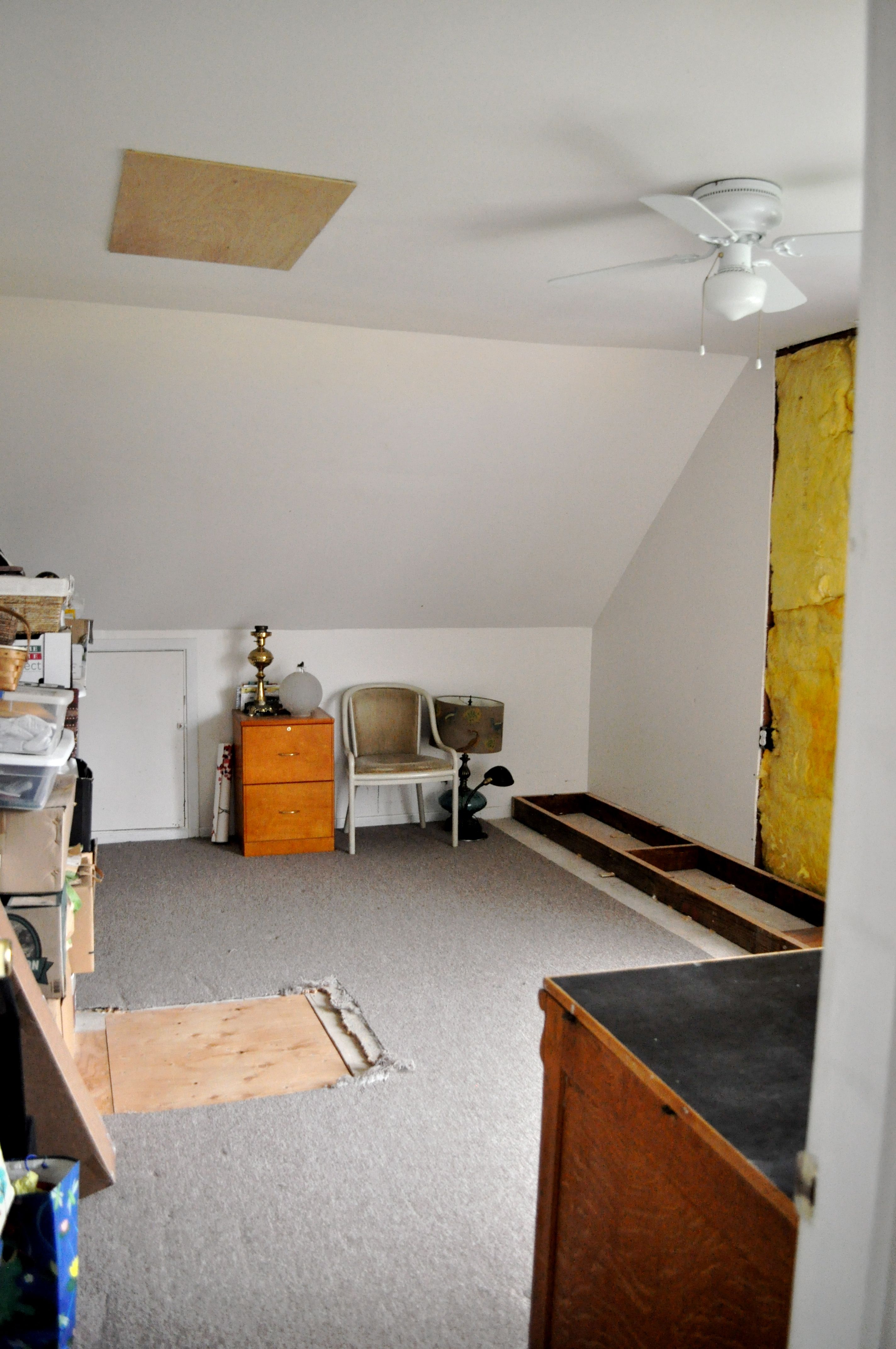 The room is generously sized and our plan is to turn it into a guest room/office.  The wood framing on the floor is the base for built-in bookshelves with cabinets.  The replaced windows look out into the treetops and down into a nice part of the yard. 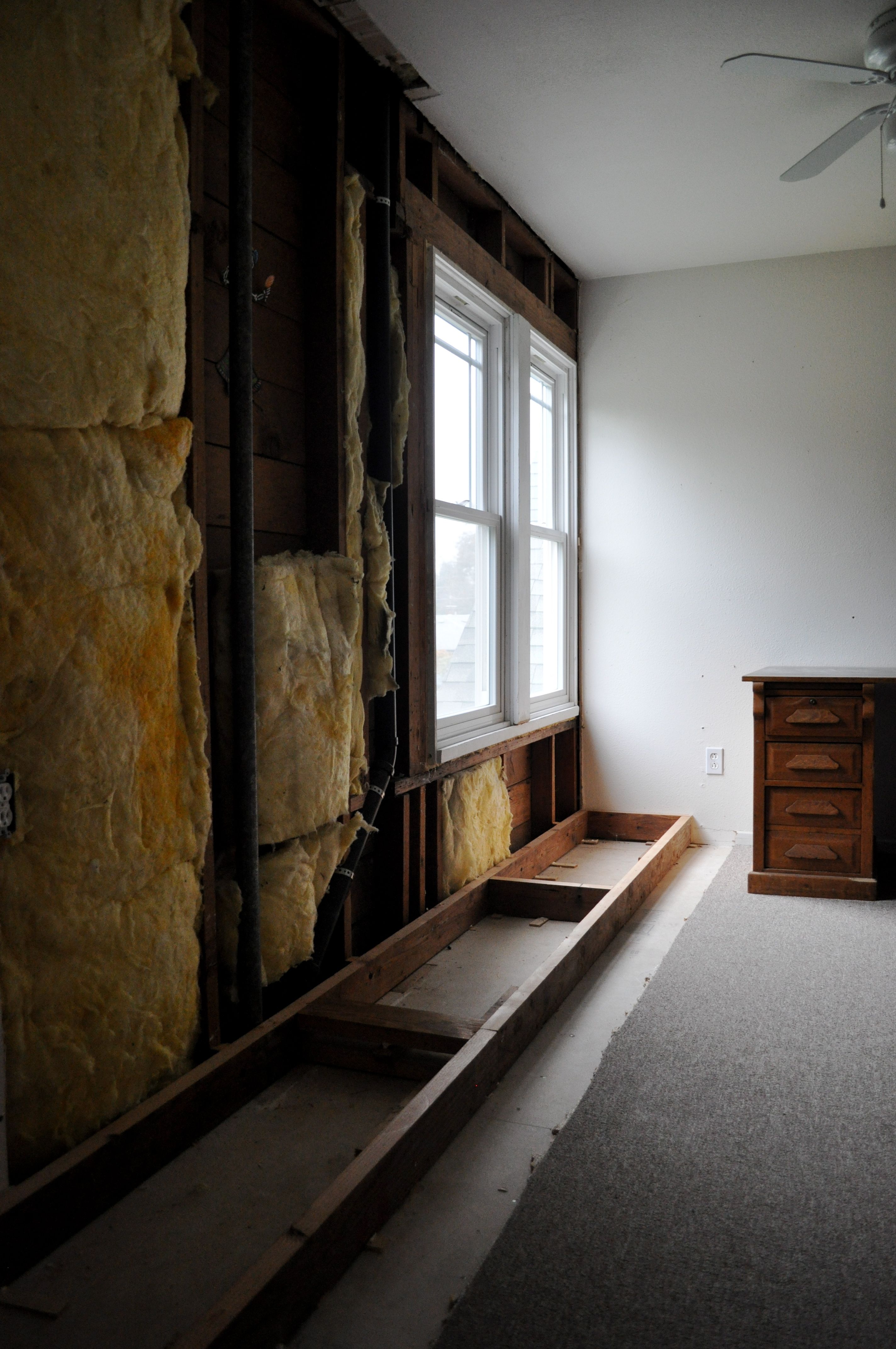 Cupboards will run the length of the wall  below window height to provide storage for craft supplies.  Bookshelves will go up to the ceiling.  There will be a seat with storage underneath the windows.

I’ve spent a lot of time looking at shelf and cupboard designs that I think will work in this room.  I want the design to be very simple, and I especially want the cupboard doors to be unfussy.  If you can, tear your eyes from the awesomeness of the room in the next photo and focus on the cabinet fronts: 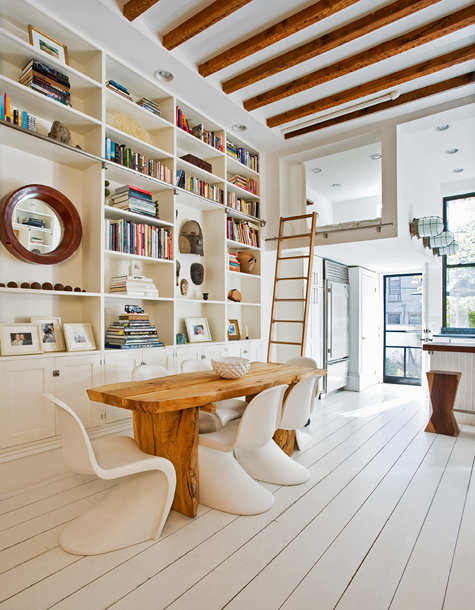 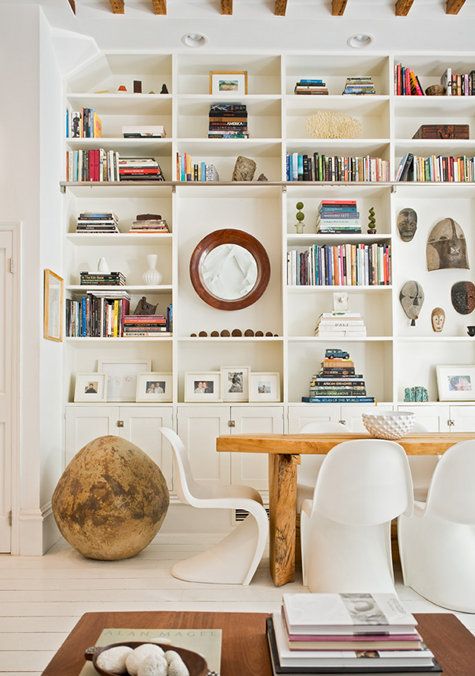 I love that they are flush with the shelves, and I love the simple hardware and clean lines. The beautiful built-in cabinets in Jenny Komenda’s library have a similar look, but with slightly  recessed shelves and a single pull: 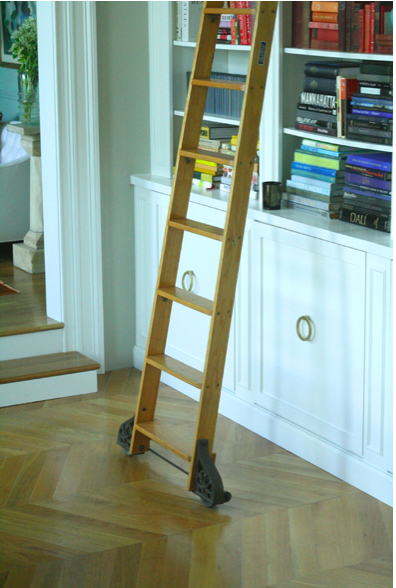 I also like these super basic ones dressed up with pretty hardware: 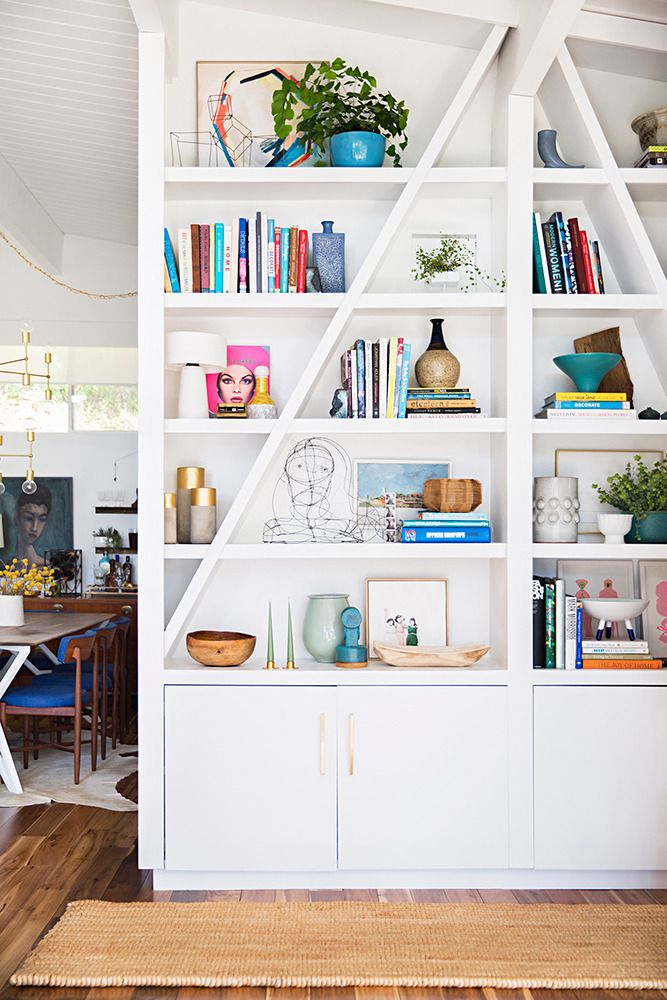 For the guest room part of the equation, I’ve started looking at trundle beds and pullout couches.  A queen-sized bed will take up a big part of the room, so it would be great to have one that retracted so I could have floor space for crafting.  I’ve seen some beautiful ones out there, and I’m picturing that when we don’t have guests it will look something like this:

The desk will sit between the window seat and the door, and I’m still pondering what that area will look like.  Ideally it will have an adorable yellow chair and sleek desk like this:

Of course, there’s a long way to go before furniture comes into the picture; the to-do list that will transform this into a room my mama could sleep in is a mile long.  Our plan is to:

I’ll be sharing progress on this room as well as some of my ideas for paint, decor and furnishings in future posts.  Thanks for reading along and come back for Faraway Friday!