Last week I shared the Broyhill Brasilia nightstands I got courtesy of Craigslist (the post is here, in case you missed it) and this week I thought I would show you how I gussied them up a bit more, and where they ended up in our house.  First, a reminder of what these beauties look like post refinishing: 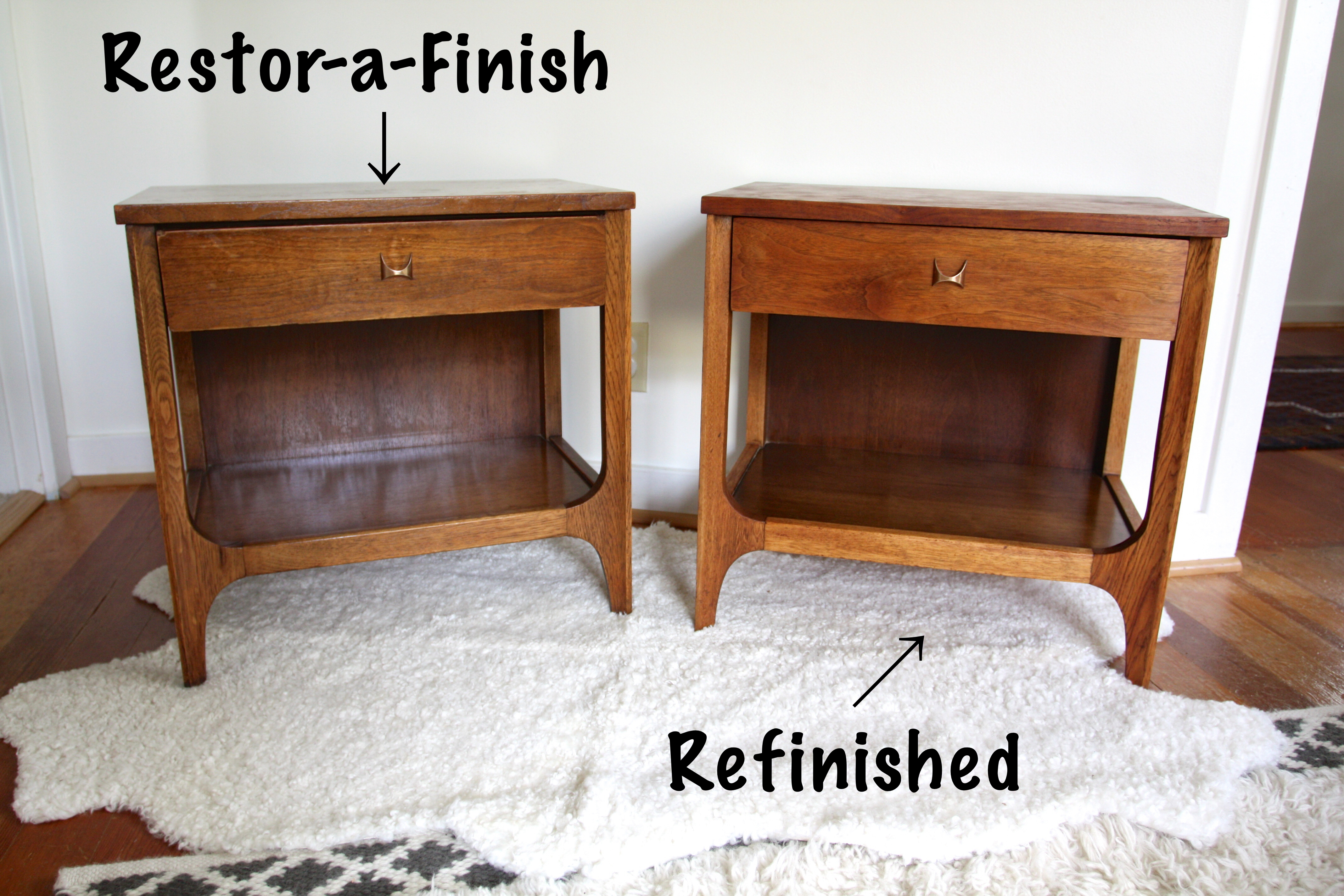 Apart from their good looks, one of the things that thrilled me about these nightstands is that they have drawers–an improvement over my old nightstand situation.  But when I opened up the drawers I was underwhelmed.  The drawers were lined with baby powder-scented contact paper.  The smell was cloying, so I immediately ripped out the paper only to discover that it was masking something worse: 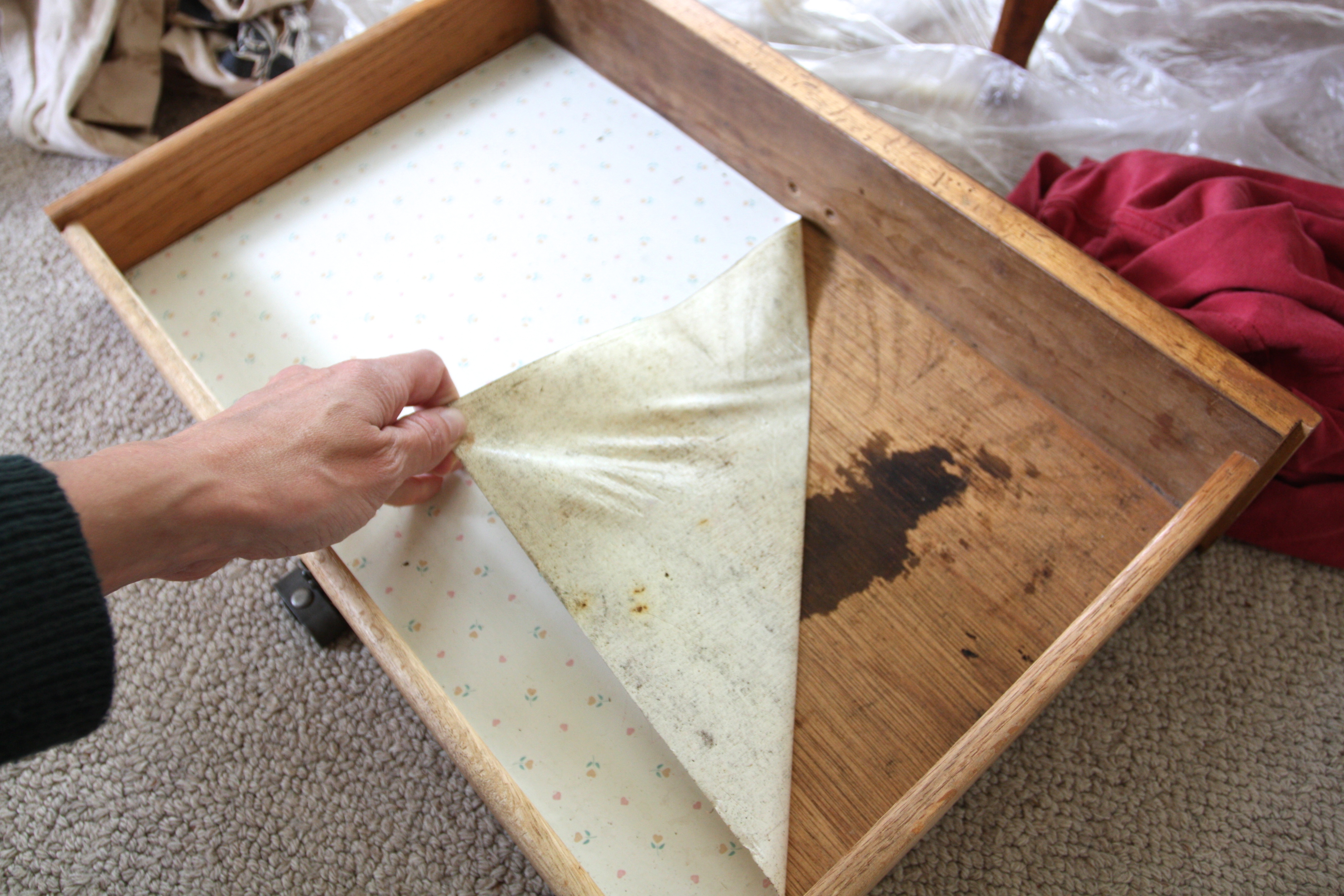 After revealing this massive smelly (yes, smelly) stain, I sanded it down so that it was less obvious and I scrubbed it several times over.  But would this image ever leave my mind? Would I ever be able to open the drawer without wondering what created this malodorous mark?  All I know for sure is that the stain was created by . . . fluids (suddenly the word ‘fluids’ sounds gross in a onomatopoeia way).  A new liner was in order.

I had a small amount of beautiful patterned velvet that was part of the massive fabric collection my mom gave to me a few years ago.  It’s pretty and luxurious and I decided it would be perfect for drawer liners. 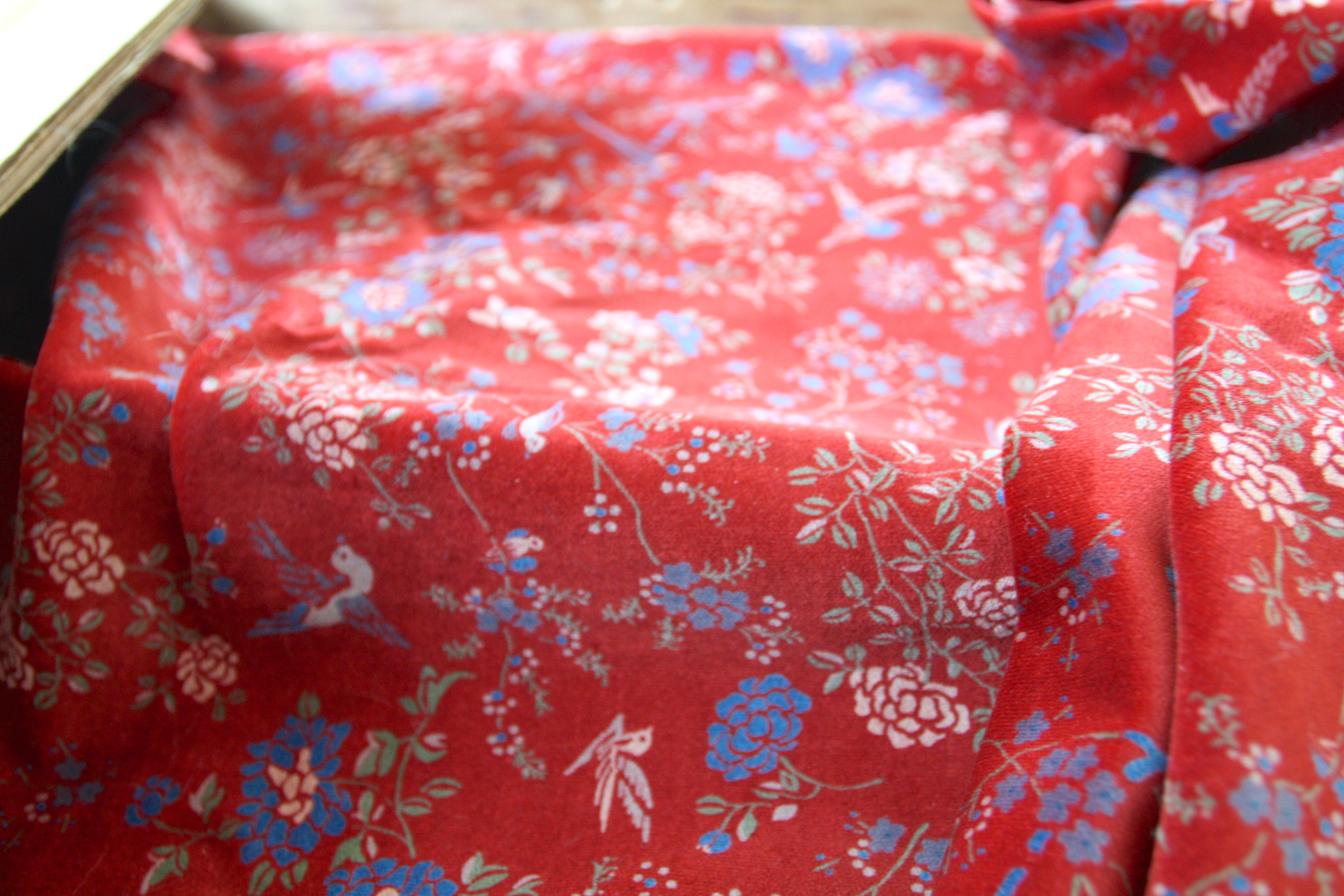 I looked at a few tutorials for lining drawers, like this one, and this one, but having just sanded the inside of the drawers and gone through the whole refinishing rigamarole I wasn’t eager to make permanent alterations.  So I took the commitment-phobe’s way out, and used cardboard instead.

I measured the inside of the shelves, then cut the cardboard to size so it would just fit.  Then I cut pieces of velvet a bit larger than the cardboard so that I could fold over the edges.

Then, using Mod Podge, I glued the velvet to the cardboard.  If you haven’t tried Mod Podge you really should.  It’s super forgiving, dries clear, and works great for gluing and decoupaging.  Basically it’s the bomb.com. 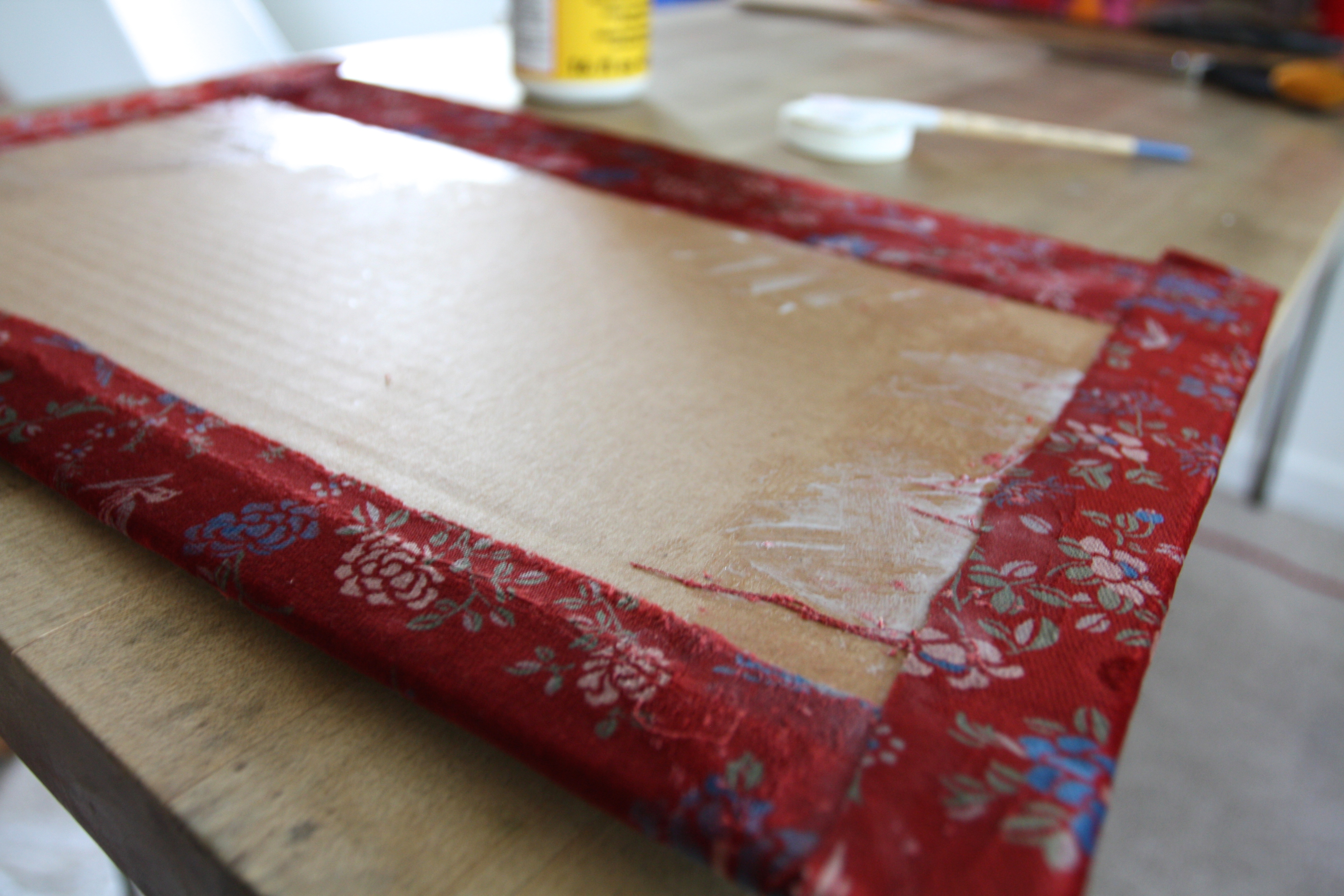 I smoothed and stretched the front to avoid any wrinkles and then folded the sides over the cardboard.  To keep the fabric edges from fraying I put Mod Podge both on the top and bottom of the folded over edge of the fabric so that it is completely adhered to the cardboard.  Then I let it dry for half an hour, and ta-da, velvet lined drawers! 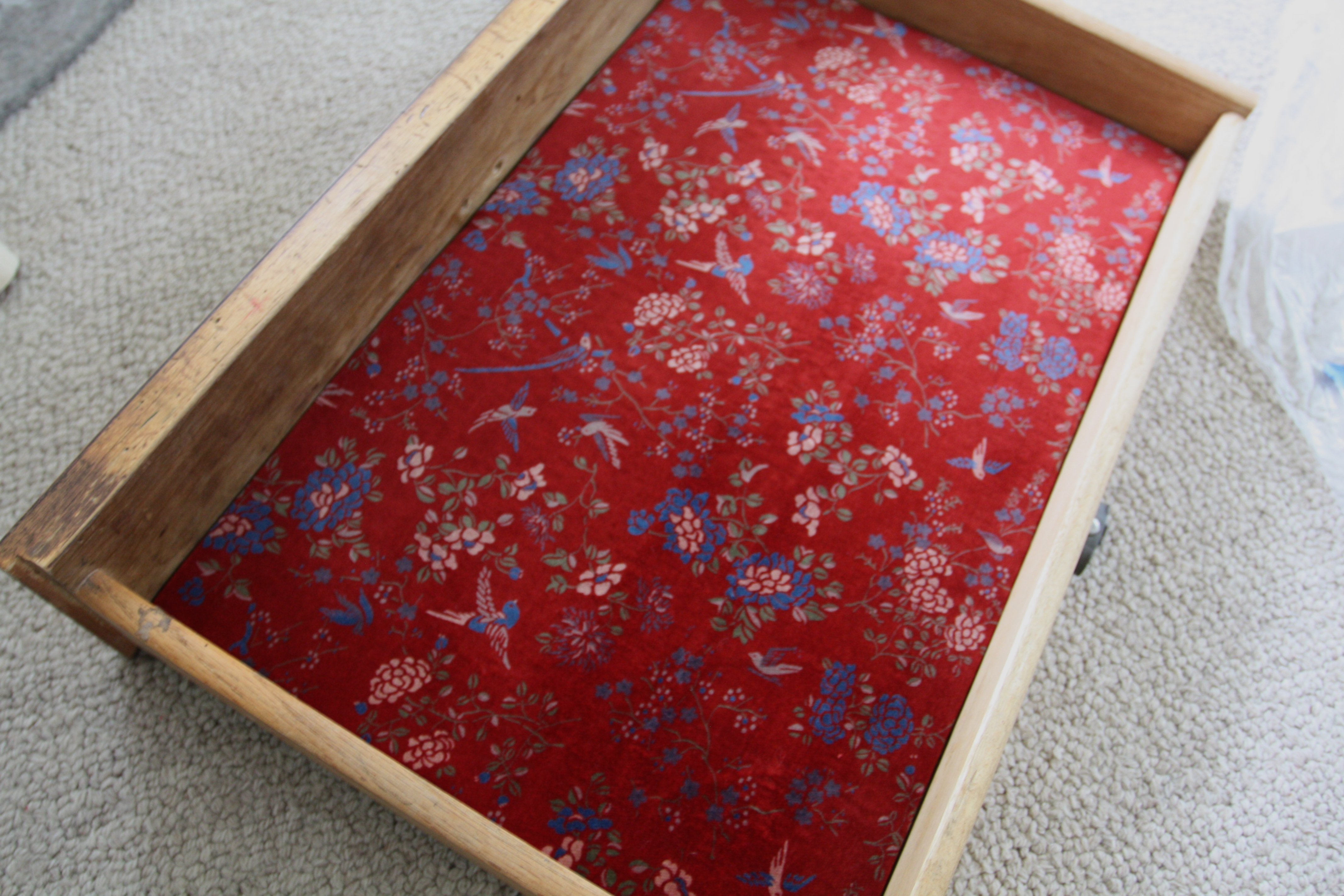 Here is what my nightstand situation looked like before: 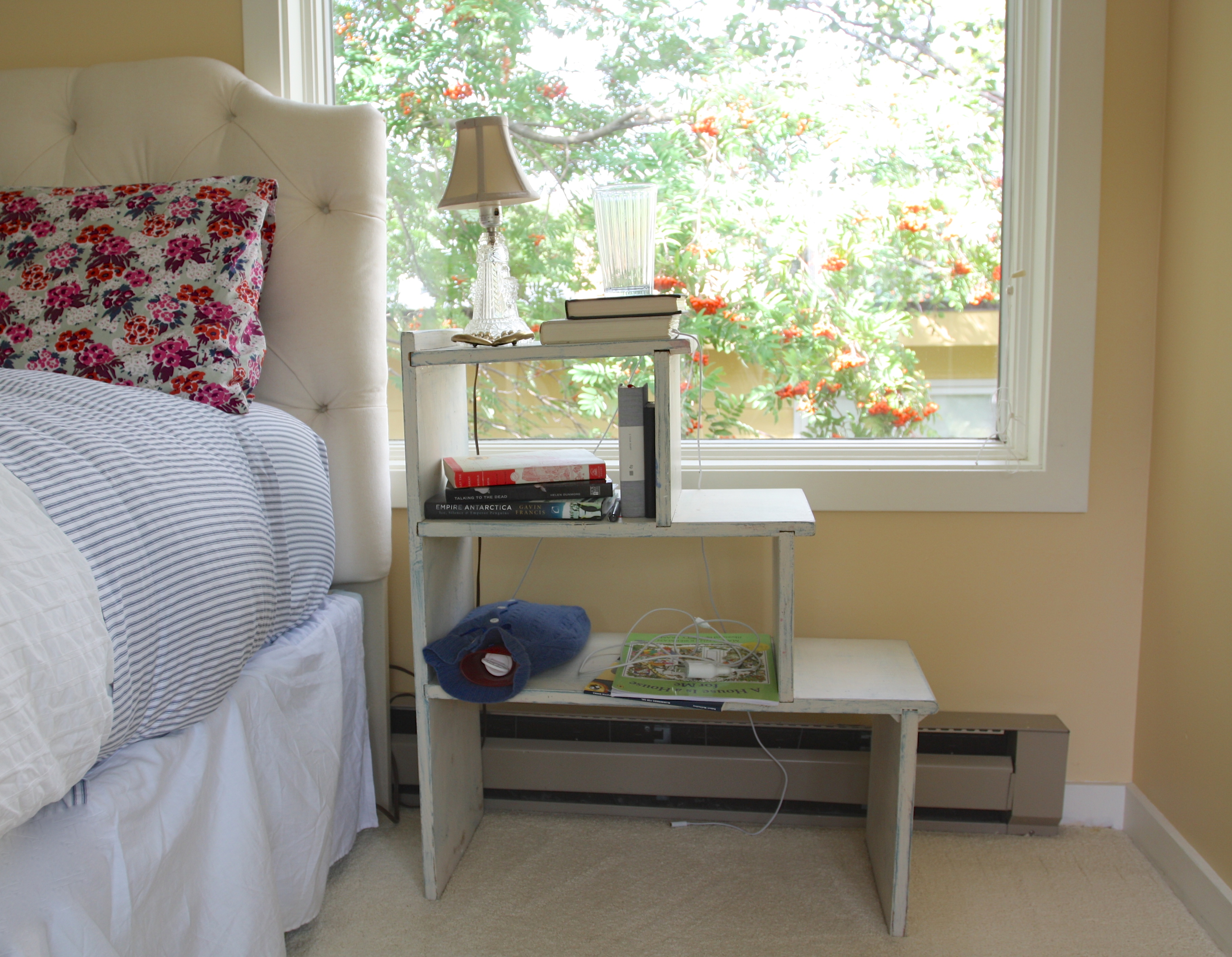 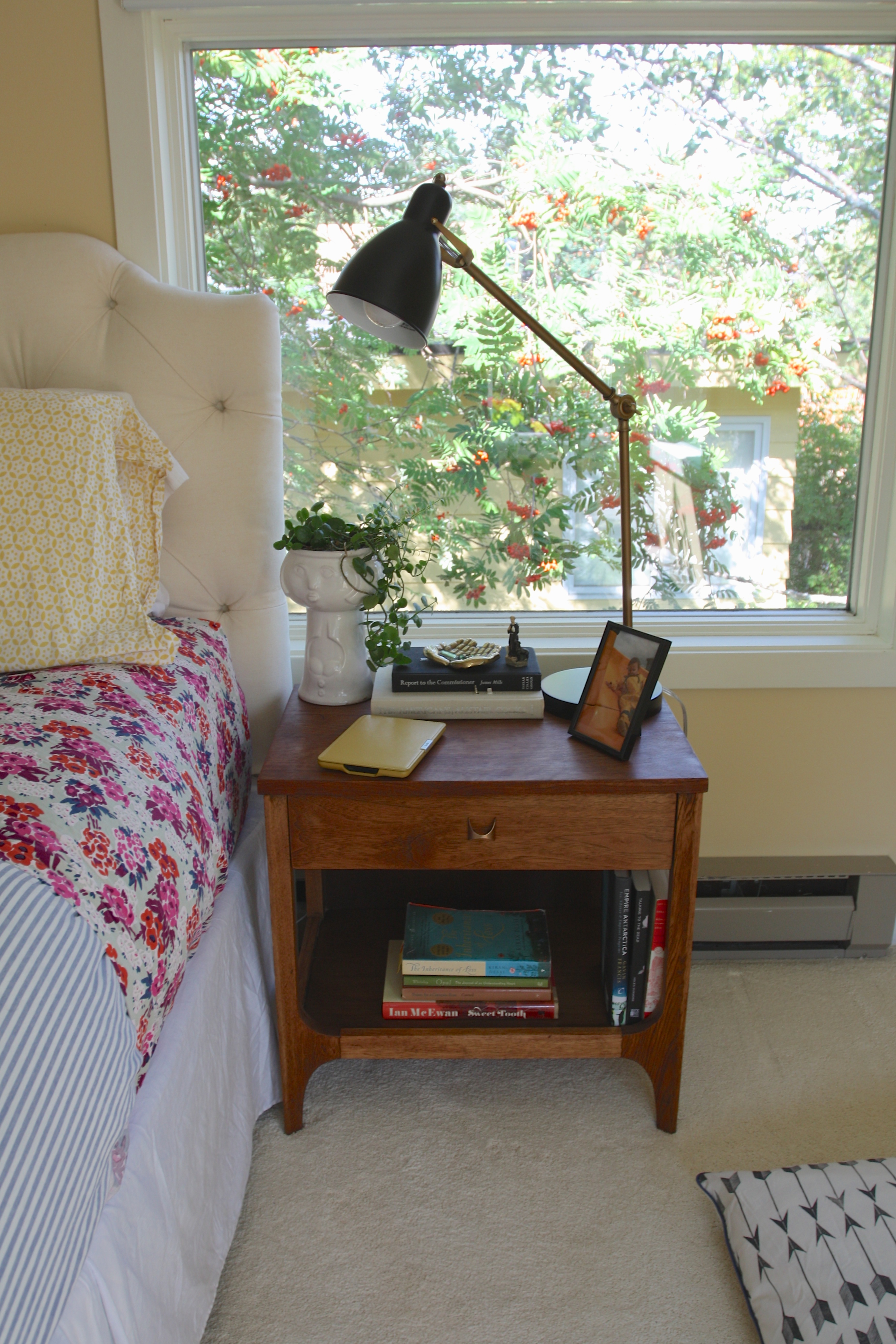 Muuuuuch better.  It’s nice to not see the mess of cords anymore, the height is just right, and I have way more surface area for the things that I need and want like the picture of Opal and the little St. Francis statue I bought in Assisi. 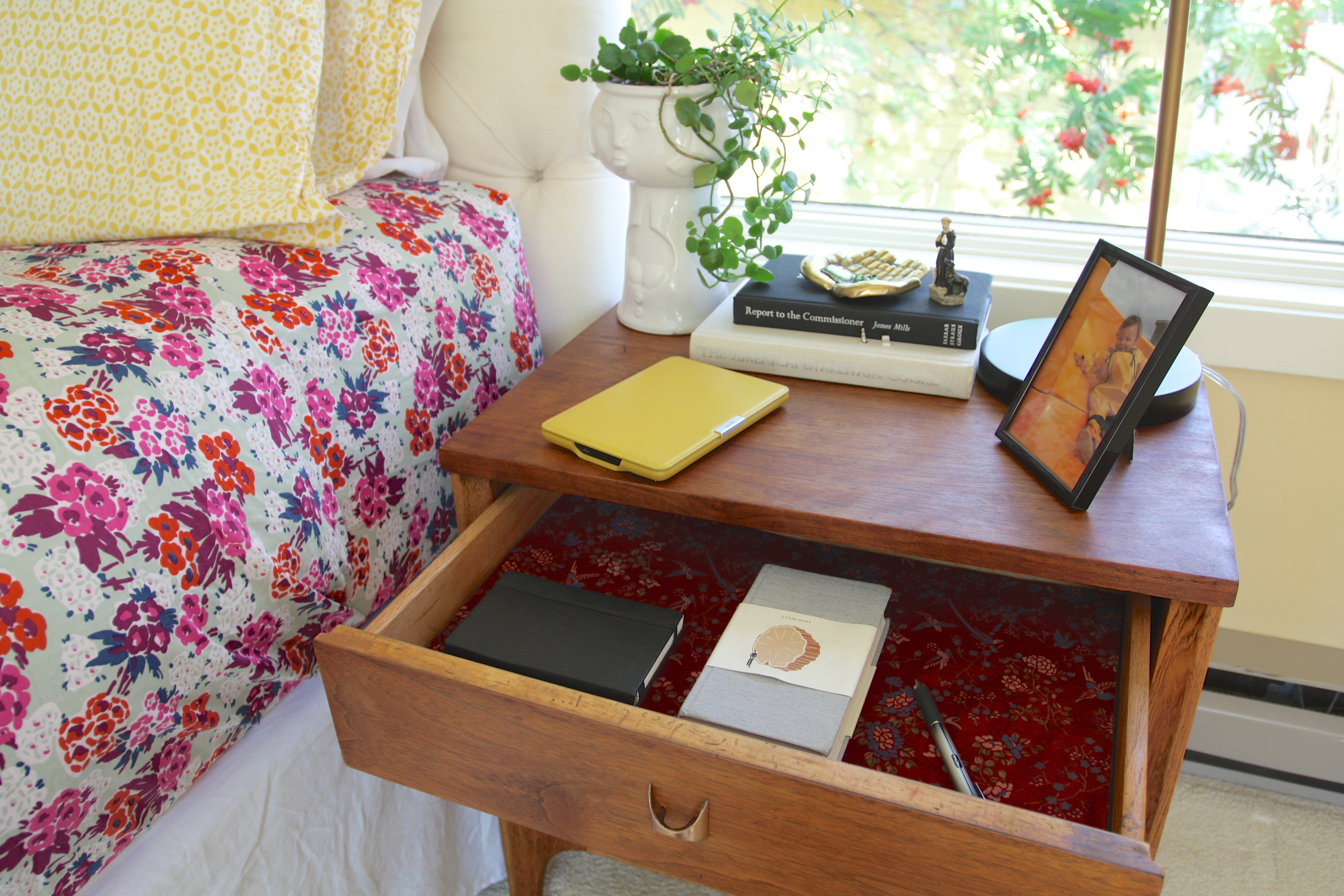 Having the drawer is great, and the velvet lining makes it feel especially luxurious.  Chester is liking his new nightstand too.  His old nightstand wasn’t quite so ramshackle but this is still a major improvement. 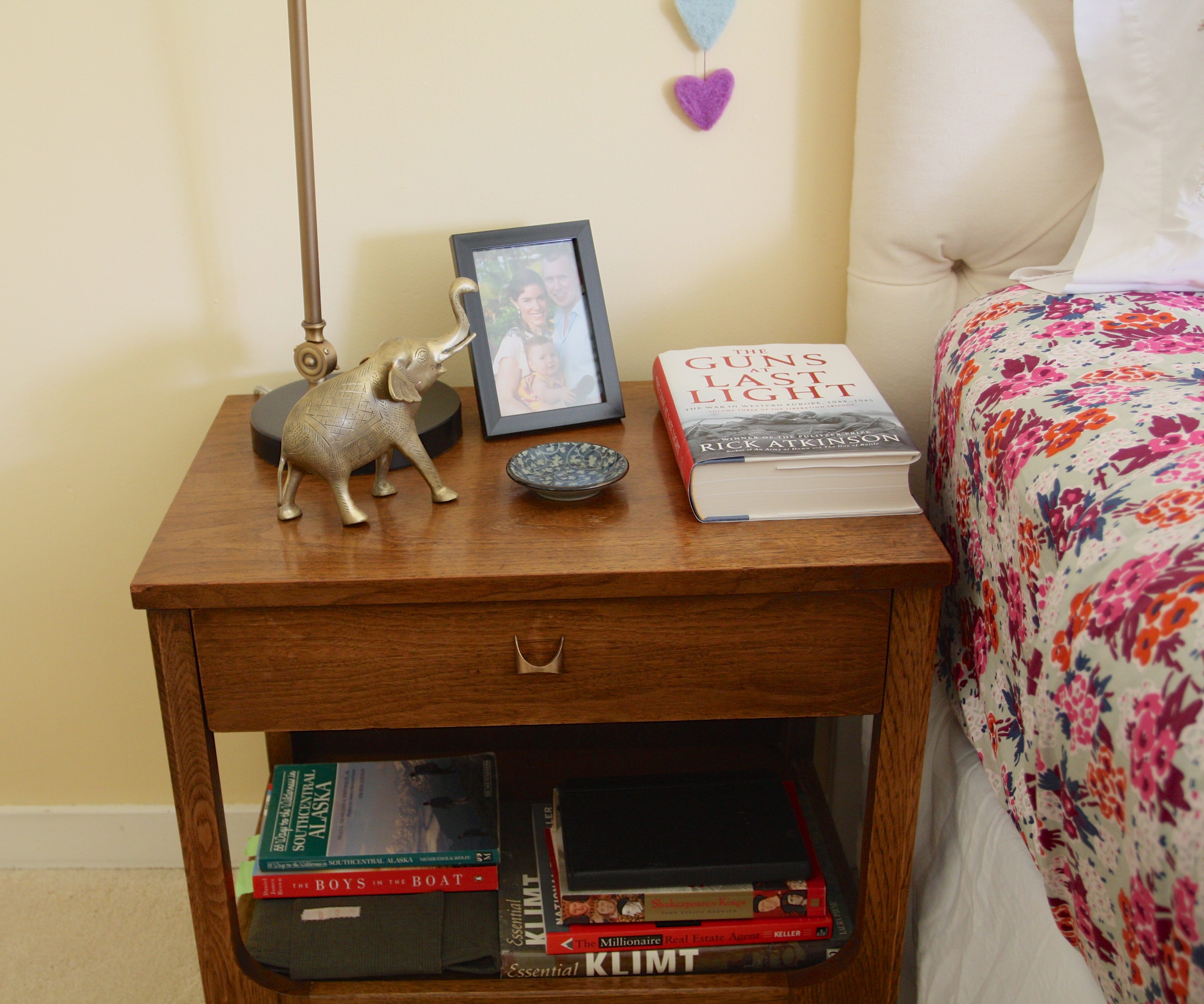 (Did you notice that I claimed the refinished version for myself and gave Chester the restor-a-finished one?  I am so that kind of wife.) 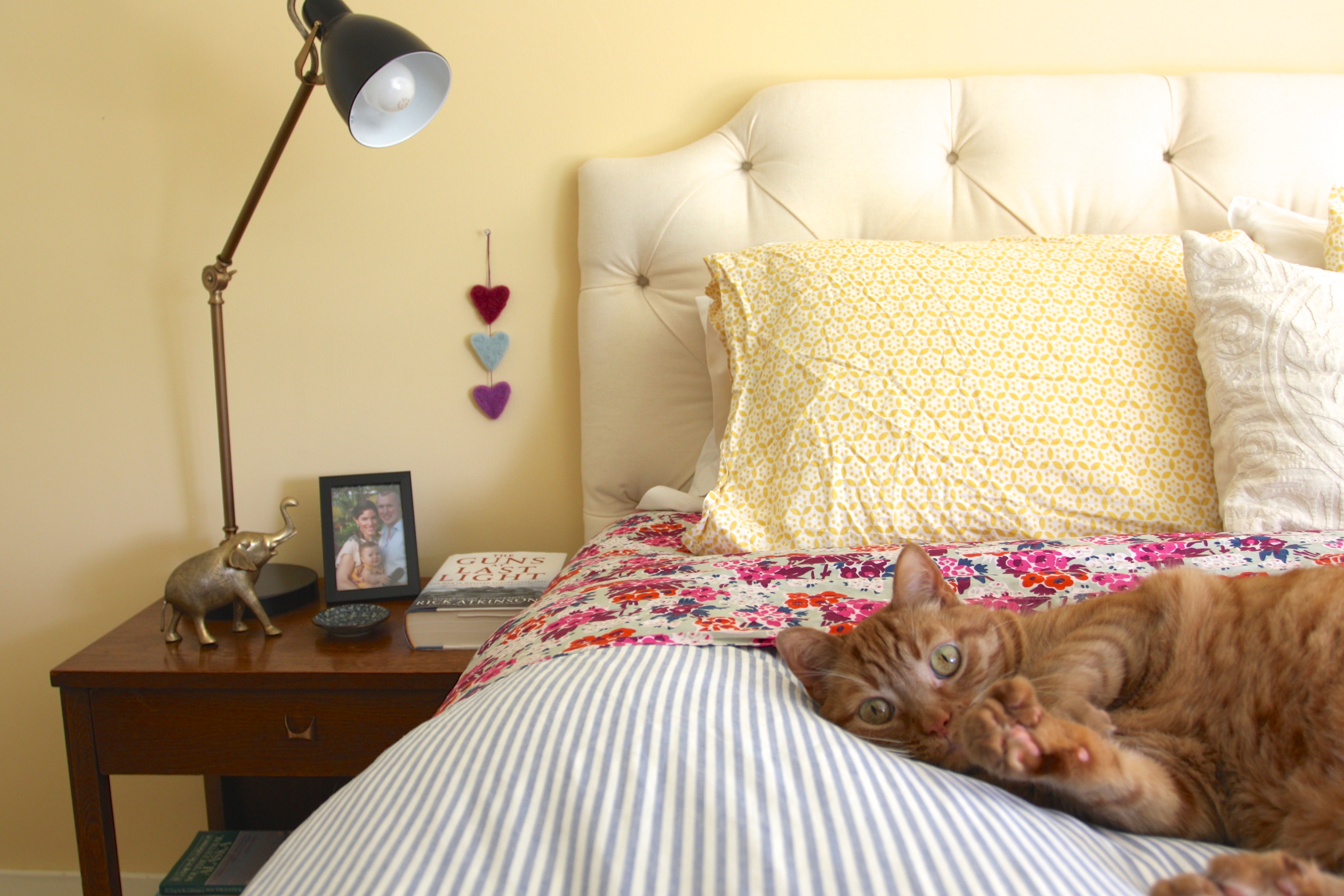 And here is my darling Cromwell showing off his gibbous eyes and jutting chin in all their protuberant glory: 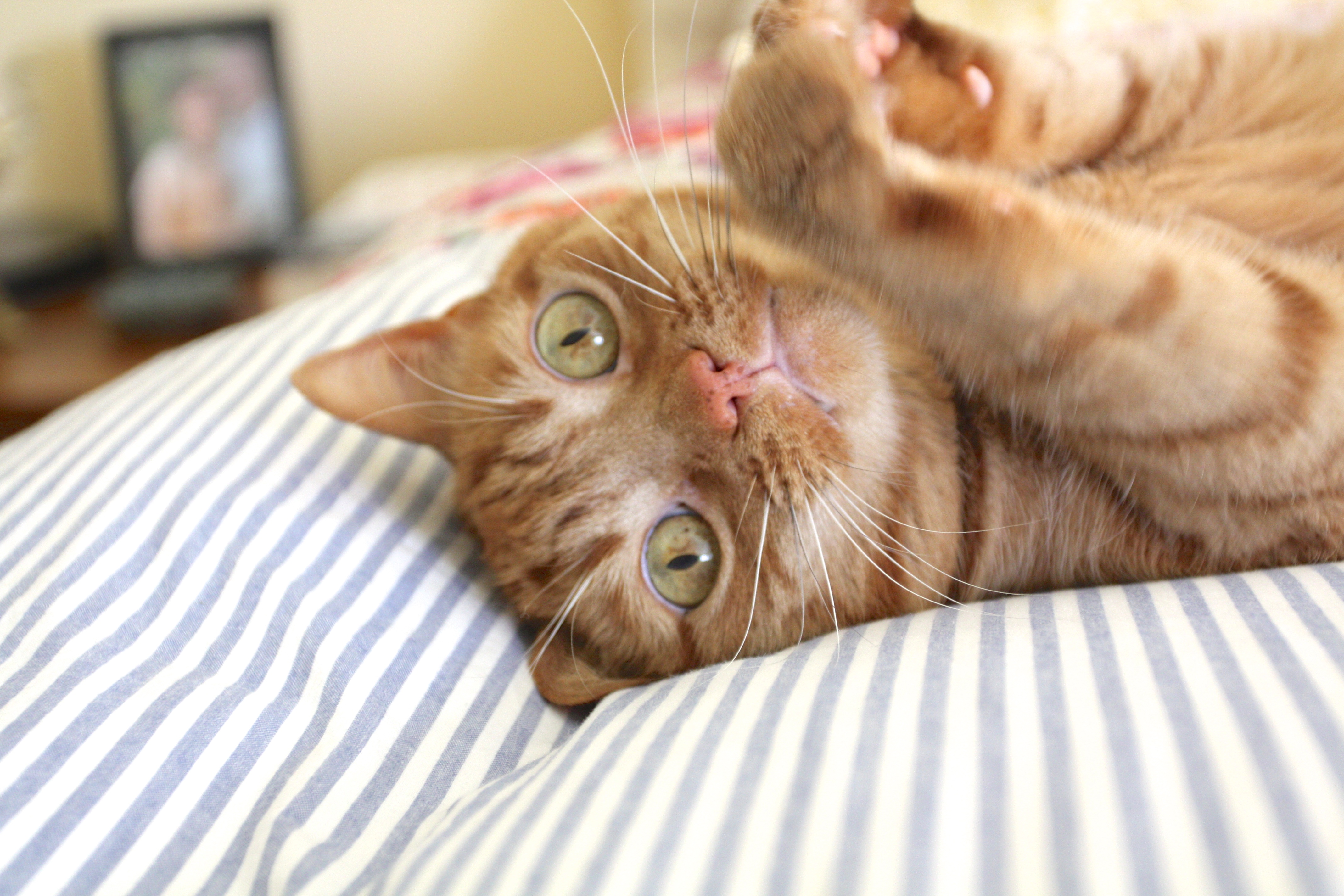 Has there ever been a cat so  handsome?  I dearly love this guy.

So that’s it, my simple, zero-committment drawer-lining trick.  Have a great week and stay tuned for a gorgeous post on Wednesday when Katie harkens back to her wedding and shares what she learned about planning the wedding you want.

Craigslist everywhere is a hit-or-miss hodge podge, but I’m fairly certain that in Alaska it’s especially bleak.  There’s a lot of taxidermy (don’t try to tell Alaskans that stuffed dead animals don’t belong in the furniture category!), overstuffed ’80s couches, and mattresses so stained they look like crime scenes, selling for the bargain price of $150.   And yet I check it every day, sometimes several times per.  Last week that fiendish madness paid off big time when I came across this ad: 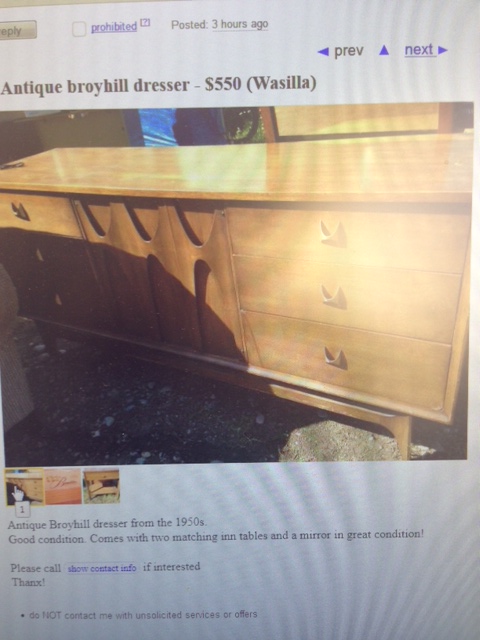 I have been on the hunt for new nightstands and a credenza-y dresser for ages, and here they were all in one sweetheart of a package.  Obviously $550 is some serious dough, but if I were to buy just the nightstands from, say, West Elm, it would cost way north of $550 when you include shipping.  Let alone the dresser, which is crazy and beautiful, so needless to say I jumped at this.  Here’s what I ended up with: 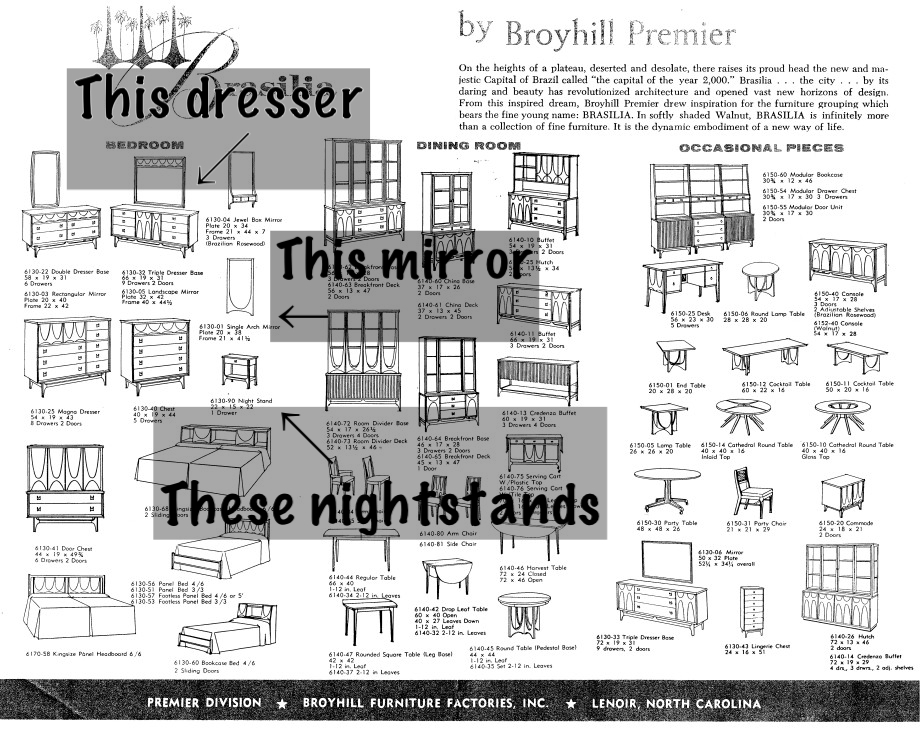 Here’s a picture of a dresser like mine (not my actual dresser) looking fine: 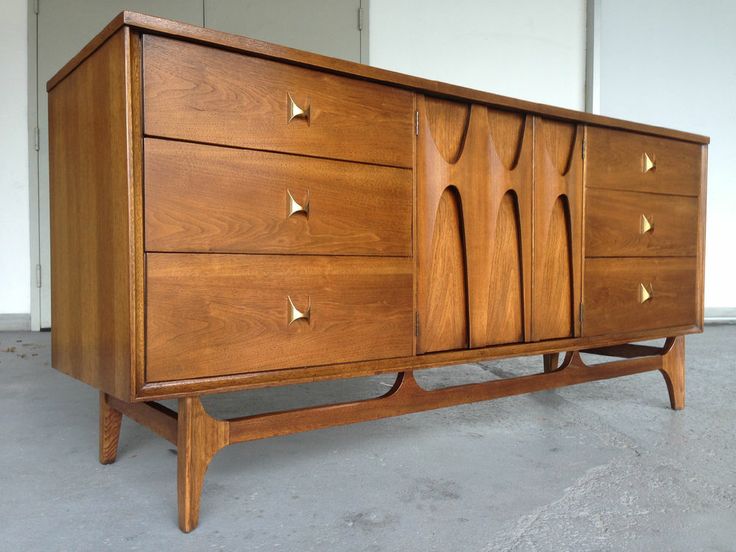 When we unloaded them from the car the smell of talcum powder was dizzying.  The nightstands came complete with the crocheted doilies that topped them (though did little to protect them) for upwards of fifty years.  There was sort of a dingy, half-a-century-of-smoking-inside pall to the finish, and it was clear right away that more than just cleaning was needed. 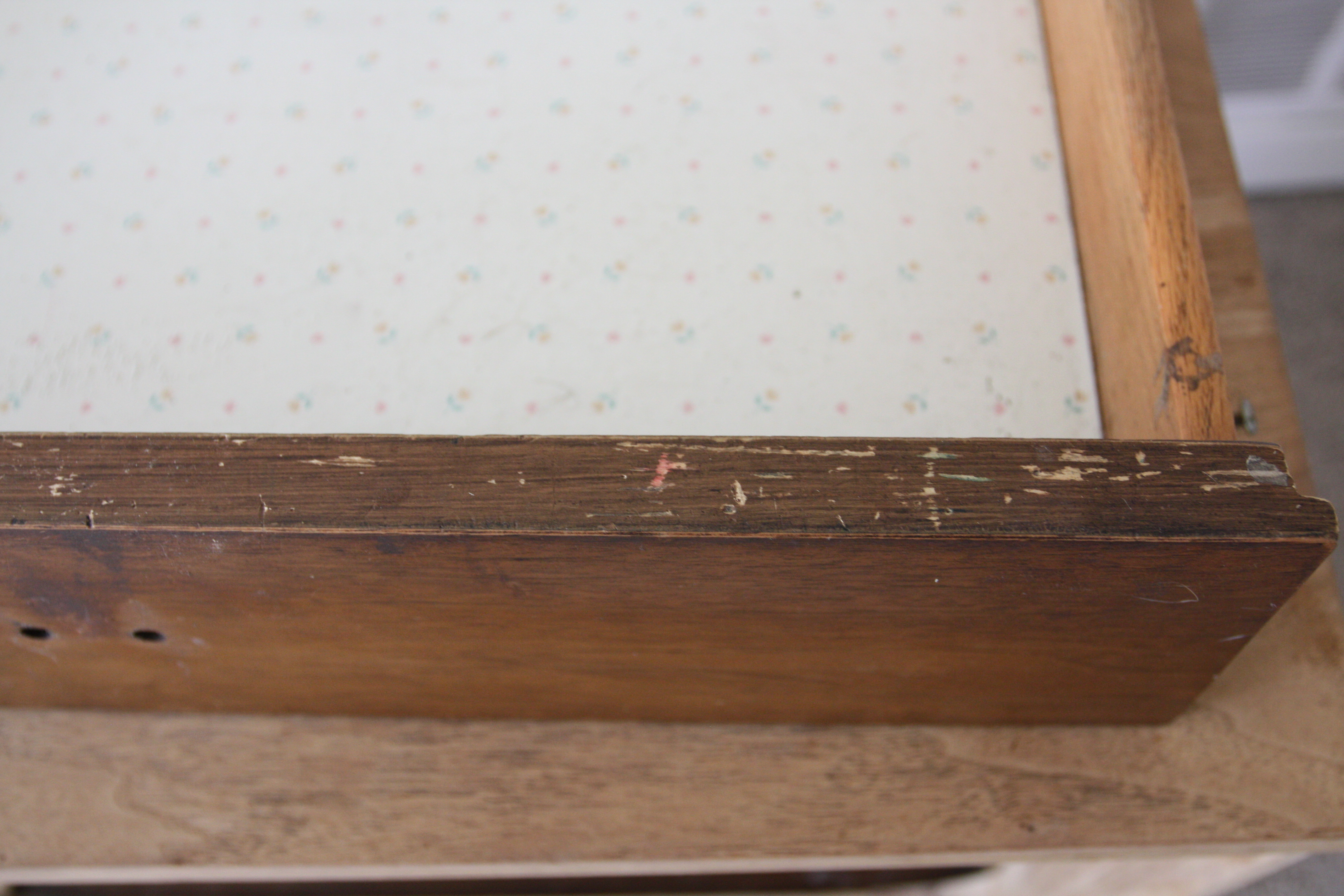 I decided that I would experiment with the nightstands first to see how little work I could get away with in tackling the dresser.  I chose the most damaged of the two to begin with; it had one leg that looked like a dog chewed on it, and so I decided I would have to go at the whole thing with an orbital sander to smooth it out.  The sanding only took about an hour, but my right hand was a painful claw afterward.  Here is what it looked like post sanding: 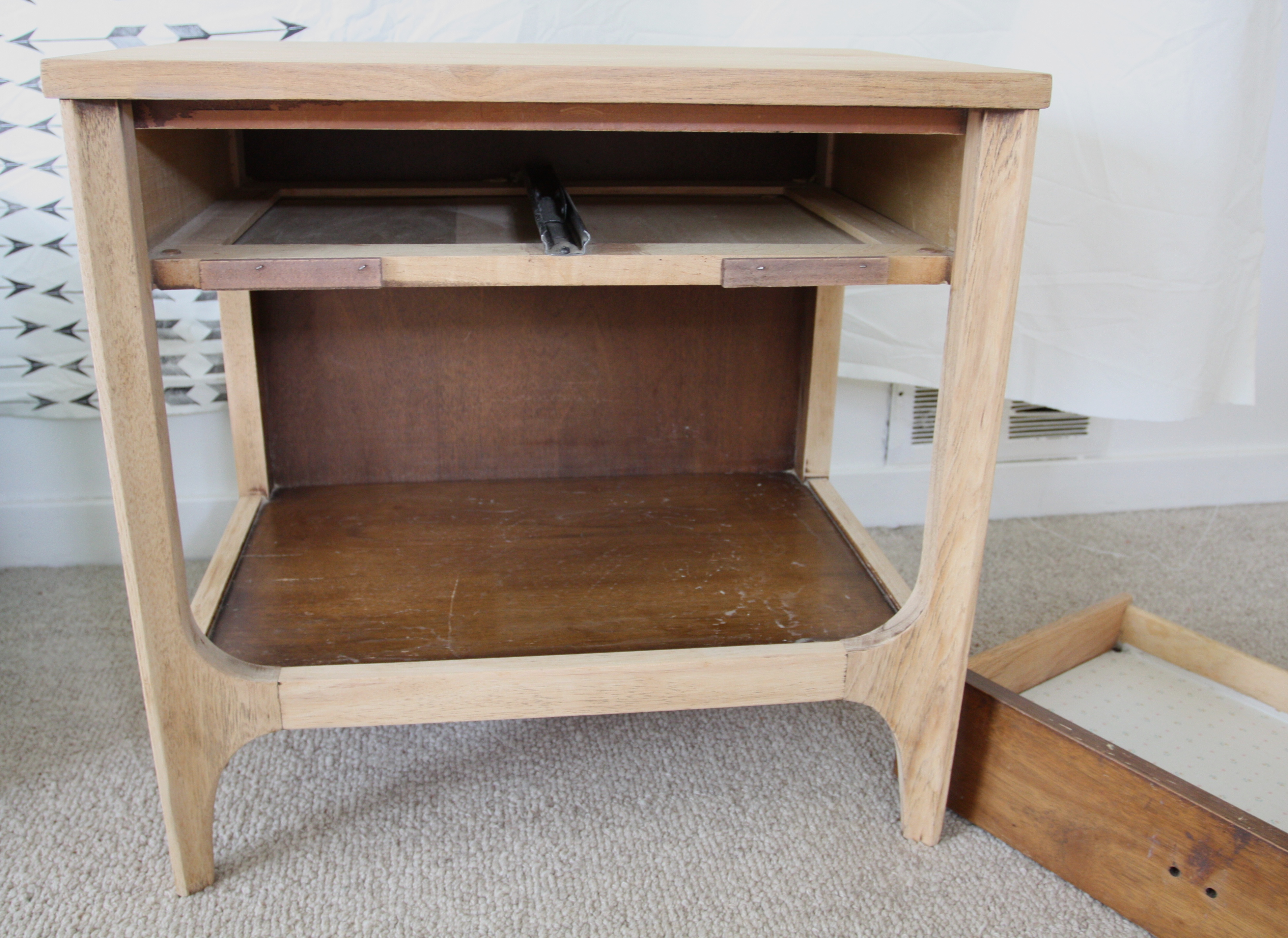 The bottom shelf and back are a thin veneer and I was worried that they wouldn’t stand up to the orbital sander so I just lightly sanded them by hand.

After sanding I cleaned the table thoroughly and then used Danish Oil in Light Walnut to stain and finish it.

I waited about an hour, and then applied a second coat of Danish Oil.  After letting that dry for another hour (you probably don’t actually have to wait that long) I used Howard Feed-n-Wax to really make the wood sing.  And here is the result: 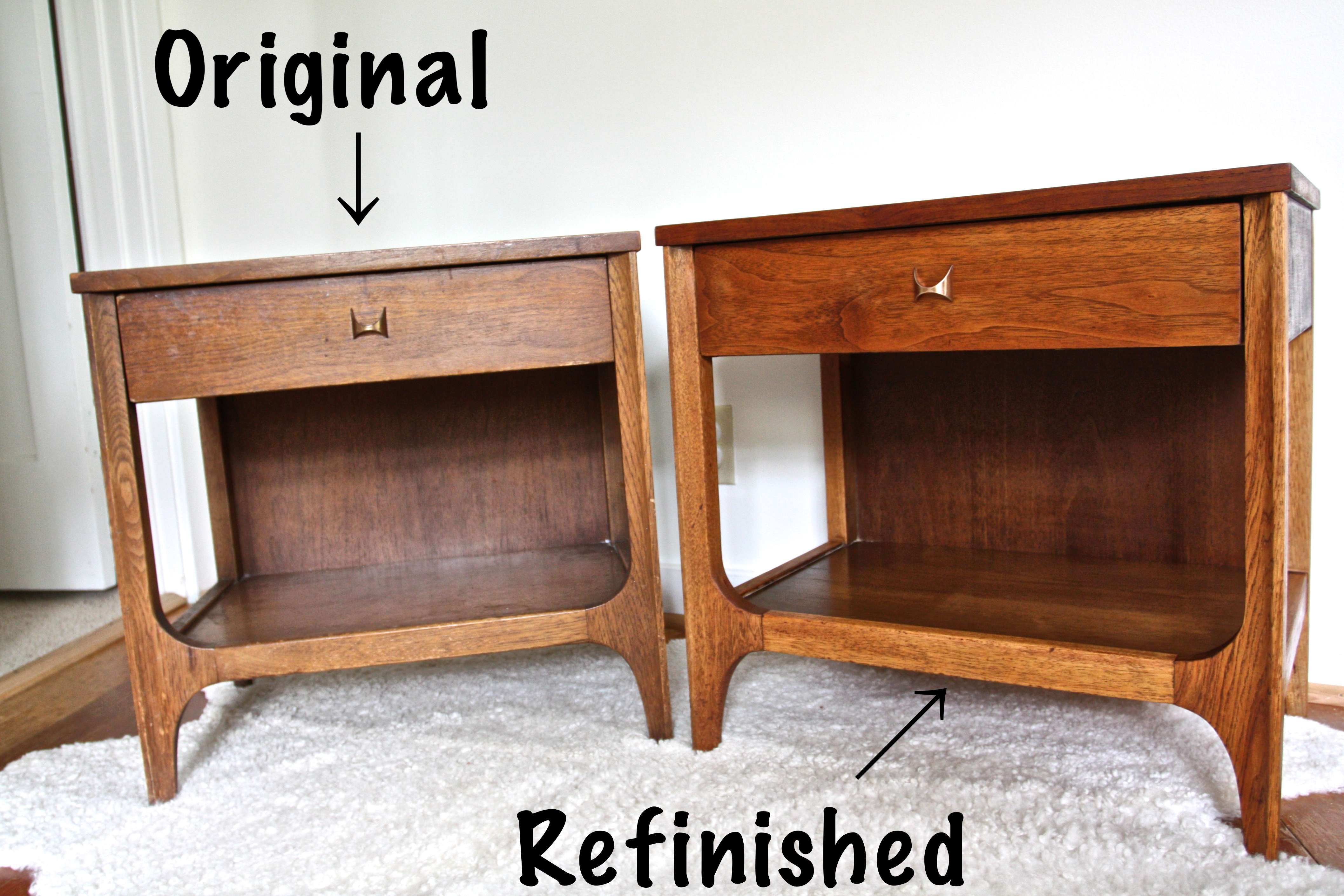 It’s a pretty major difference, and let me tell you, in person the refinished version is FOXY!  I was tempted to give the second nightstand the same treatment, but one glance at the massive dresser reminded me that I owed it to my former-right-hand-now-claw to see if I could get away with a short-cut.

The second nightstand was in better shape than the first, but still pretty beat up. 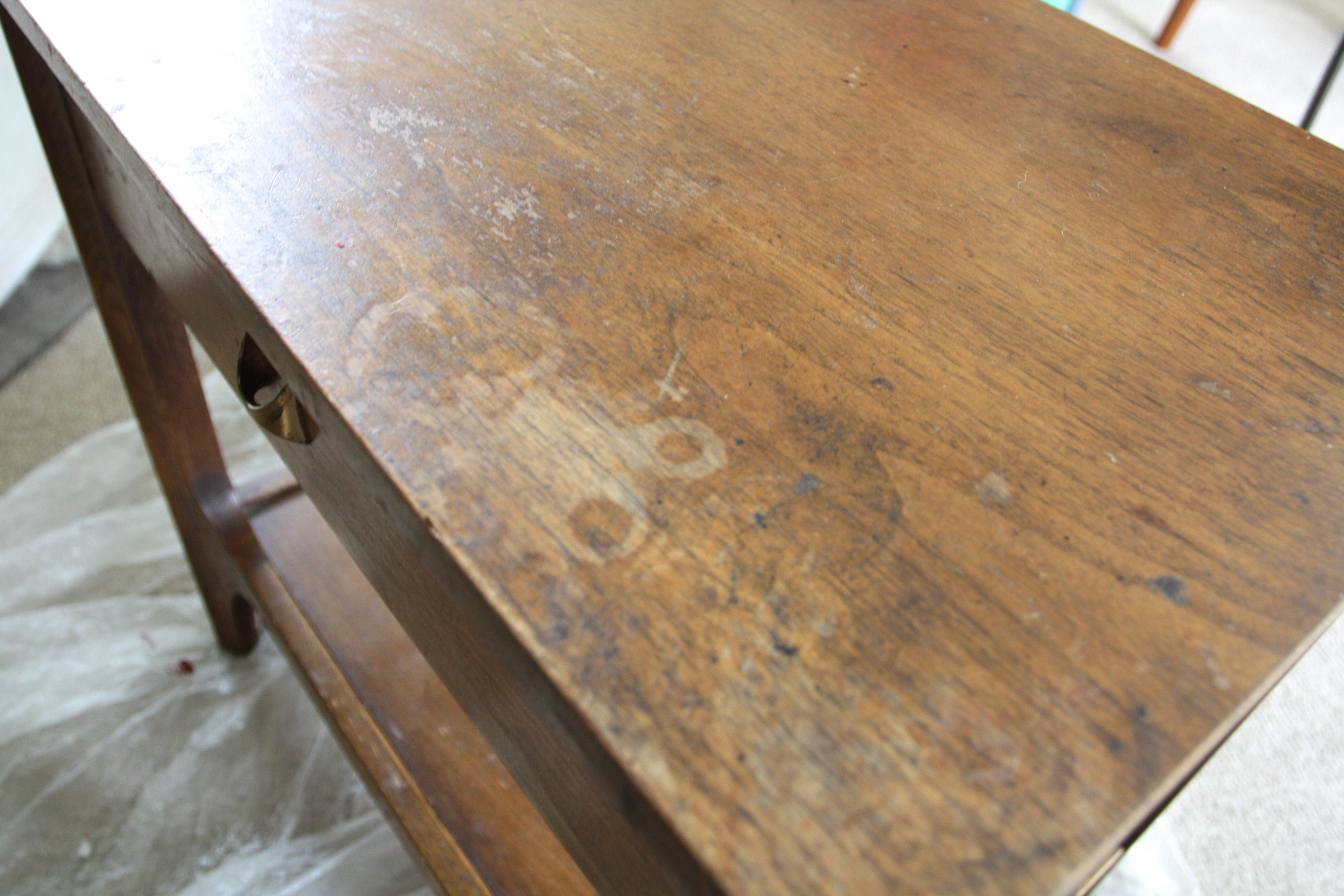 I lightly sanded it by hand, and then had a go with Katie’s beloved Restor-A-Finish in Walnut. 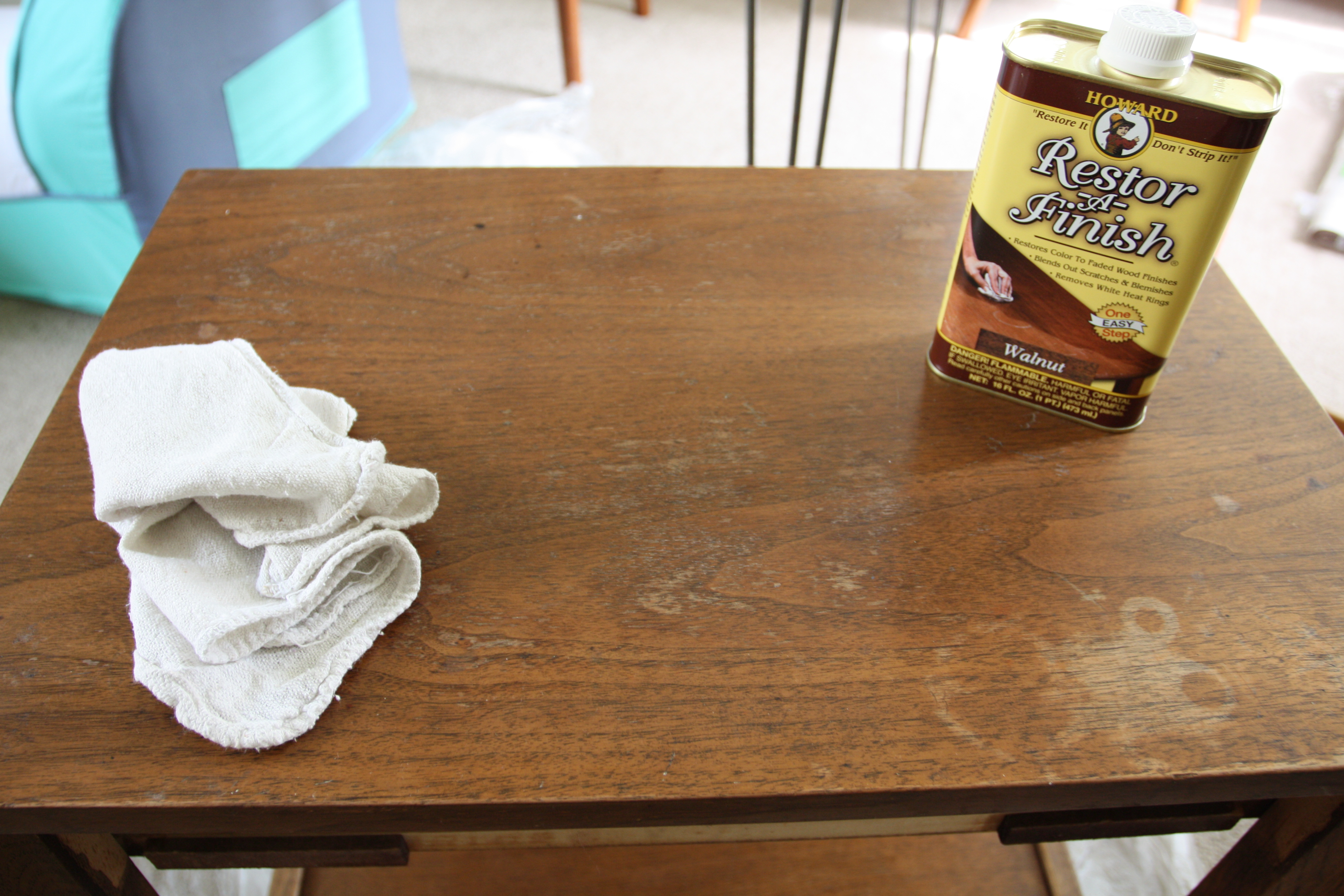 The Restor-A-Finish couldn’t be easier: you just wipe-on wipe-off (while Mr. Miyagi’s voice echoes in your middle-aged ear) and call it good.  It took all of 15 minutes to do the whole nightstand and the results are pretty impressive: 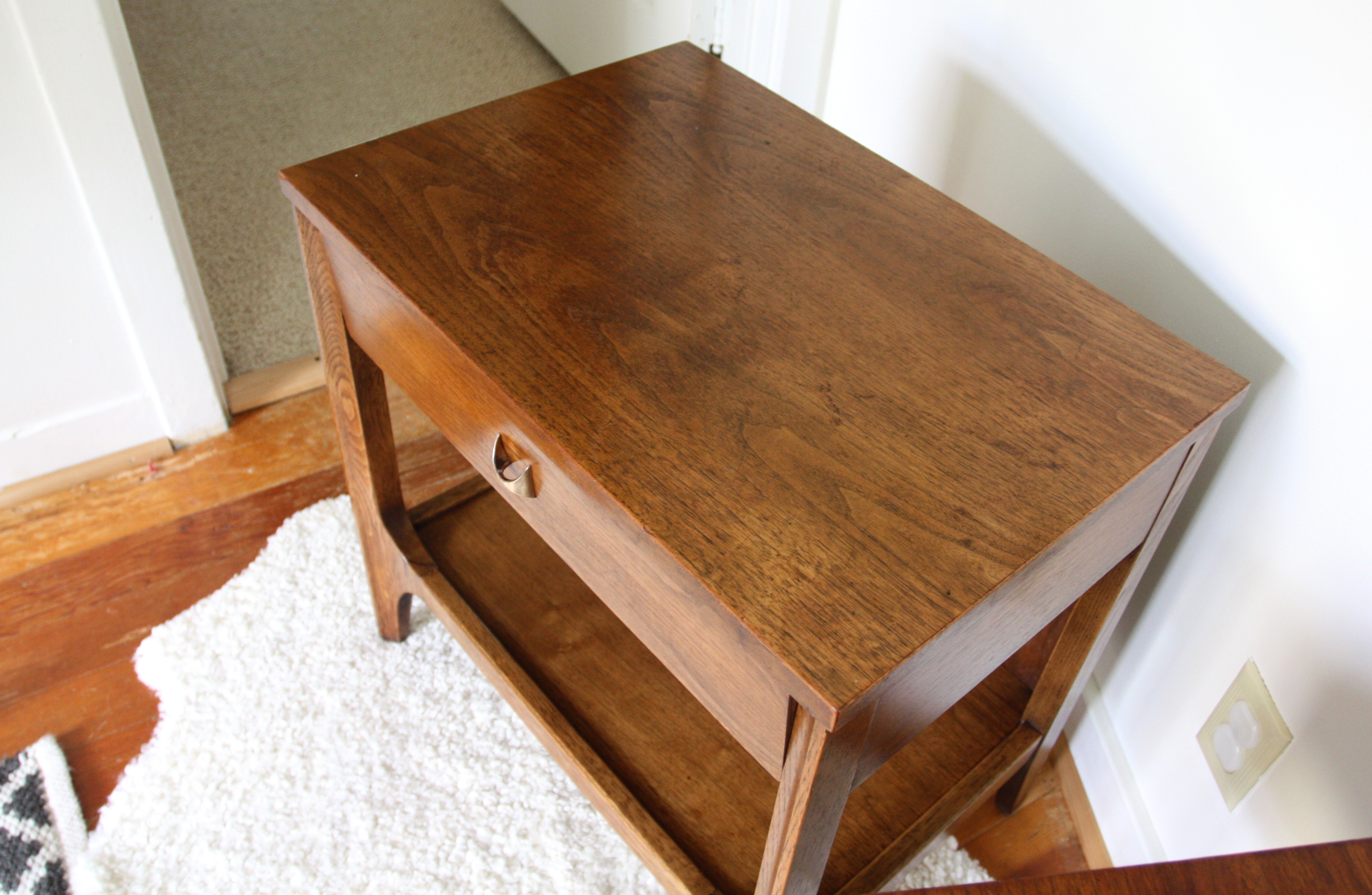 And here is the side-by-side comparison of them after they each got, to greater and lesser degrees, some TLC:

It probably surprises exactly no one that the refinished version looks better than the restor-a-finished version, but I have to say that the restor-a-finish impressed the heck out of me.  I think for the dresser I will probably do a combination of techniques, but that’s a post for a later date.  And speaking of later dates, stay tuned for next Wednesday when I plan to share the nightstands in their final positions, including the results of my efforts at lining the drawers in velvet.

Anybody else gotten lucky with Craigslist lately?  If so, send ’em in to Good Score via email to redhousewest@gmail.com, or on Instagram by tagging #rhwgoodscore.  Check back in with us later in the week for a Pinterest Friday round-up of rooms that make great use of a color I’ve been loving lately–pink!