Despite being the biggest, sunniest room in our house, the playroom has long been our dumping ground–the room where half-finished craft projects die on the vine, while whirlpools of unsorted mail settle in for a long winter’s nap atop miscellaneous obsolete power cords.  Decorating the playroom has been languishing on the to-do list, and I finally decided I needed an exciting design element to motivate me to get going.

Actually, all of this disorganization and clutter was on purpose to create a good “before” shot for your benefit (riiiiight): 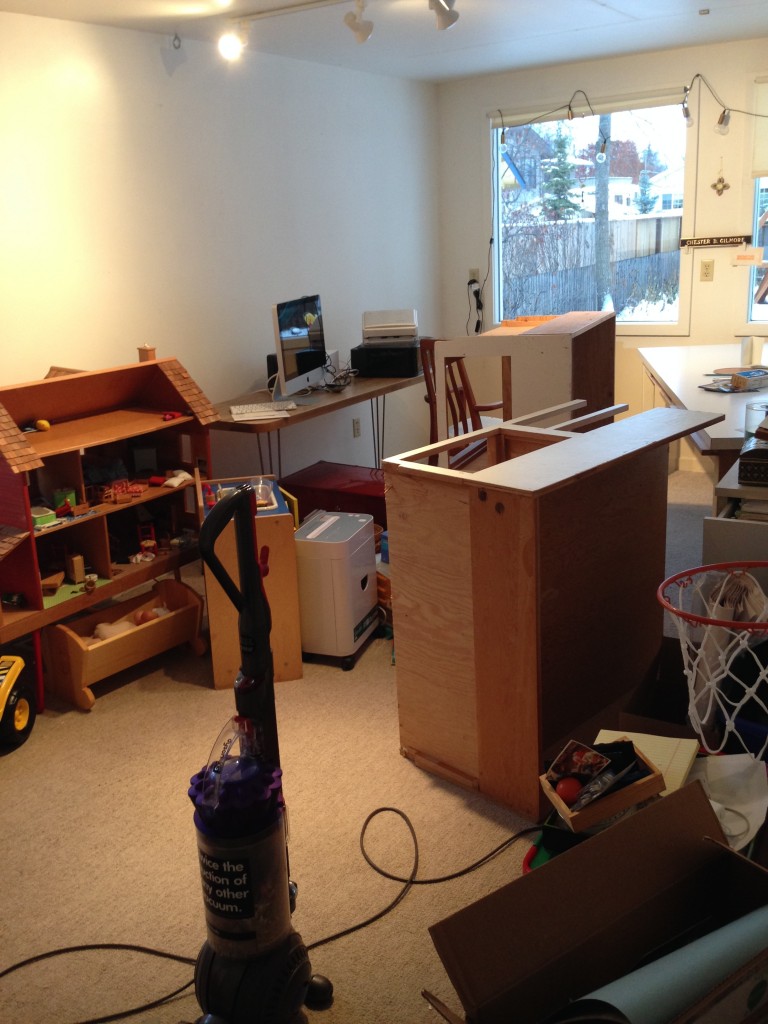 I’ve been curious about wallpaper for a long time, and I decided the playroom would be my testing ground.  I wanted something that wasn’t too cutesy, that left room for imagination, and that wouldn’t compete with our old persian rug.  I settled on the Etched Arcadia wallpaper from Anthropologie, and ordered two rolls.

Although neither Katie nor I had ever wallpapered anything before, we decided to make a project of it during her recent visit.  It turned out great!  The mural pattern was surprisingly forgiving, and after some trial and error we really got the hang of it.  Here are 5 things we learned along the way. 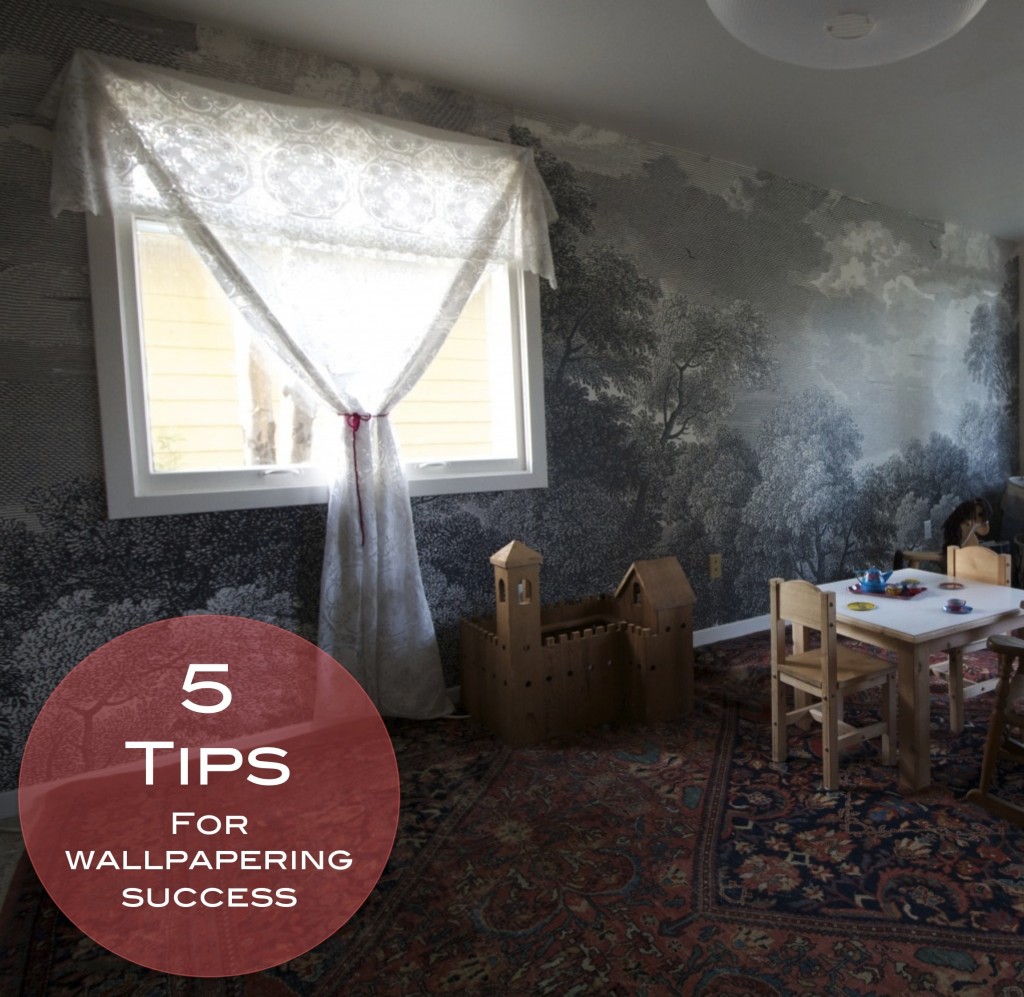 Like lots of wallpaper these days, the Etched Arcadia wallpaper is backed with SureStrip for paste-free application.  Instead of glopping paste on your walls, you simply soak each wallpaper panel.  It probably seems obvious that one would follow the directions when doing this, but we, alas, did not.  We knew enough to submerge the panel in water, but then instead of timing the recommended 30 second soak, I literally walked away to get a snack.  Big mistake.

When we smoothed the panel on the wall the backing spooged all over.  Understand that spooge is a big part of this process, even when you don’t over soak–you’ll want to have lots of rags and towels on hand.  But if you soak the paper too long you’ll be covered in slime like a ’90’s Nickelodeon game show contestant.

One of the trickiest parts about this process was moving the panels into place after they had been soaked.  The wallpaper is thick and sturdy, but when wet it definitely felt like it could tear.  Plus when you apply it to the wall, you don’t want the bottom section to accidentally adhere to the wall before you’re done smoothing the top section.  Through trial and error and a number of YouTube instructional videos, we found that “booking” the panels made things a lot easier. 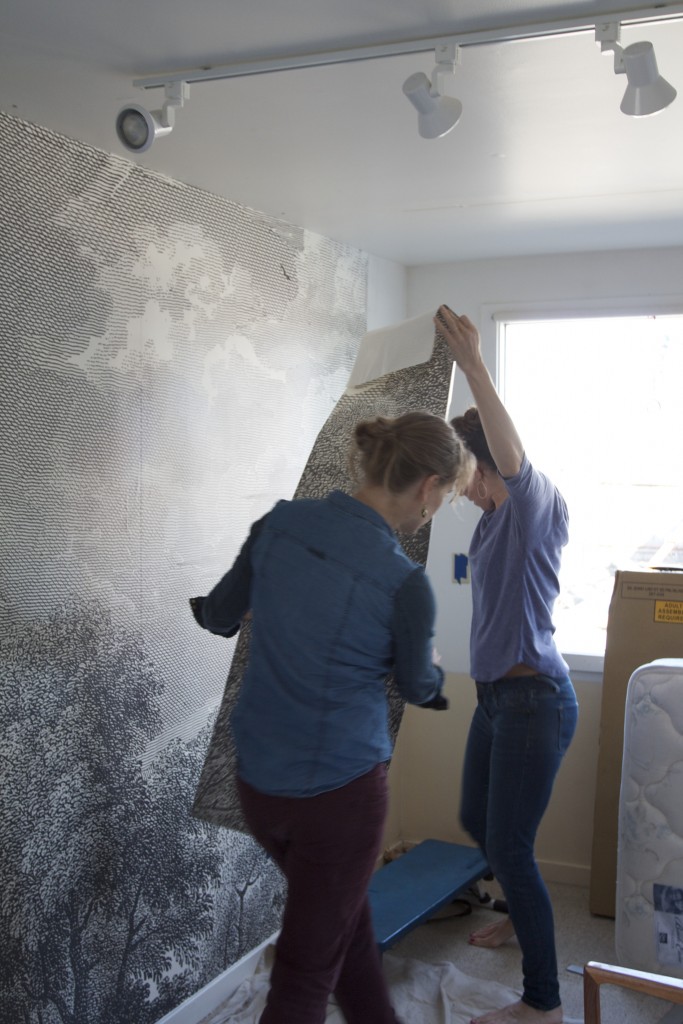 3.  A Gentle Touch is Best–Don’t Use an Ice Scraper

Not that you would use an ice scraper, but in case you were tempted, take it from me, it’s a bad idea.  When we began we were under the impression that we were missing all sorts of specialized wallpapering tools, and that we would need to aggressively press every crease and bubble out with all our might.

We learned that what happens when you use an ice scraper or squeegee is that you pretty much make the creases irreversible.  What works better is to gently and patiently smooth each panel by hand, beginning at the top. 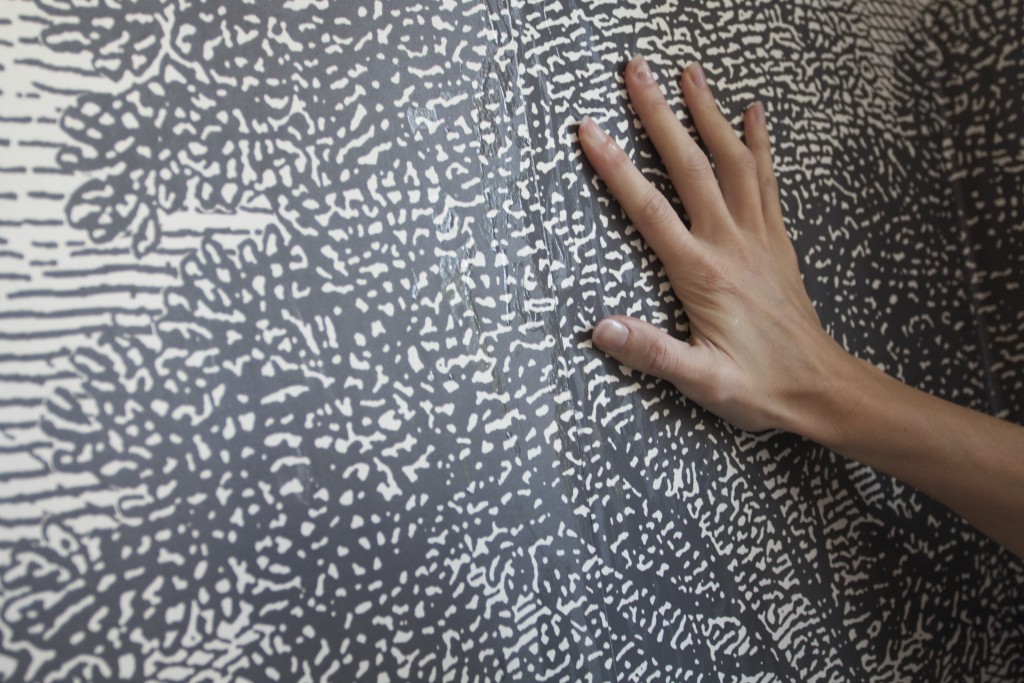 Especially if you’ve booked the bottom of the panel, you have plenty of time to work out all of the bumps (we found that we could smooth and adjust each panel for about 25 minutes after it was first placed on the wall).  Once you’ve got the top smoothed out, move to the middle, and then to the bottom.  When you have the bottom of the panel smooth, go back to the top and middle and gently push out any bubbles that have appeared.

4.  Space Between Panels is Better than Overlapping Edges

When we began, we were nervous about getting the panels to perfectly abut each other and we erred on the side of overlapping.  We didn’t realize at the time that the panels can be shifted for a long while after they’re placed on the wall, so there is ample time to scooch them into position.  On the flip side, once the edges are overlapped, it’s next to impossible to un-overlap them.

There’s one edge in particular in the playroom that is overlapped, and while it’s no big deal, you can definitely see it.  There’s a little ridge that catches the light and it interrupts the image (though I’m sure no one but me and Katie would ever notice).

5.  Use a Sharp Utility Knife and Change the Blade Often

One of the things I’m really proud of is that the wallpaper edges are straight and sharp. 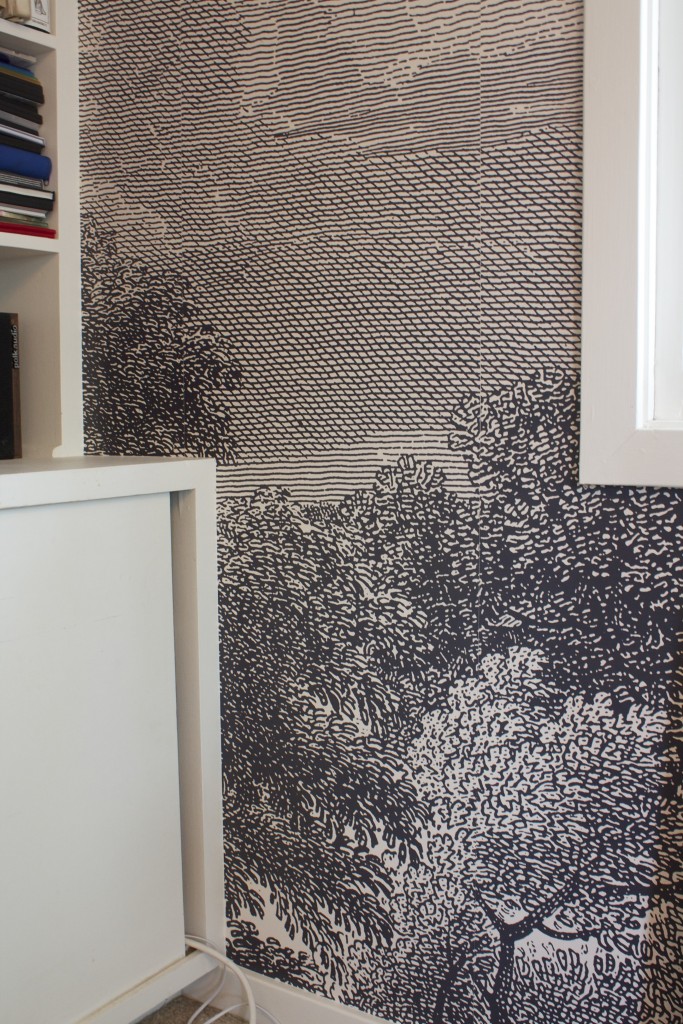 To my eye, the nice clean edges go a long way toward making it look like a pro job.  But cutting wet paper isn’t easy–as soon as the blade was the slightest bit dull the edge of the wallpaper would start to pull and shred.

We ended up using a new blade for pretty much every panel.  When cutting around one of the outlets I did tear a section of the paper, which led to us learning another valuable lesson: patching is possible.  I took the torn piece, smoothed it out, and stuck it back on the wall.  I don’t think I could find it today if I tried.

And that’s it!  It took us a full day to finish, but once we got the hang of it (no pun intended) it wasn’t difficult.   The end result is, as the blogger kids these days say, ‘impactful’. 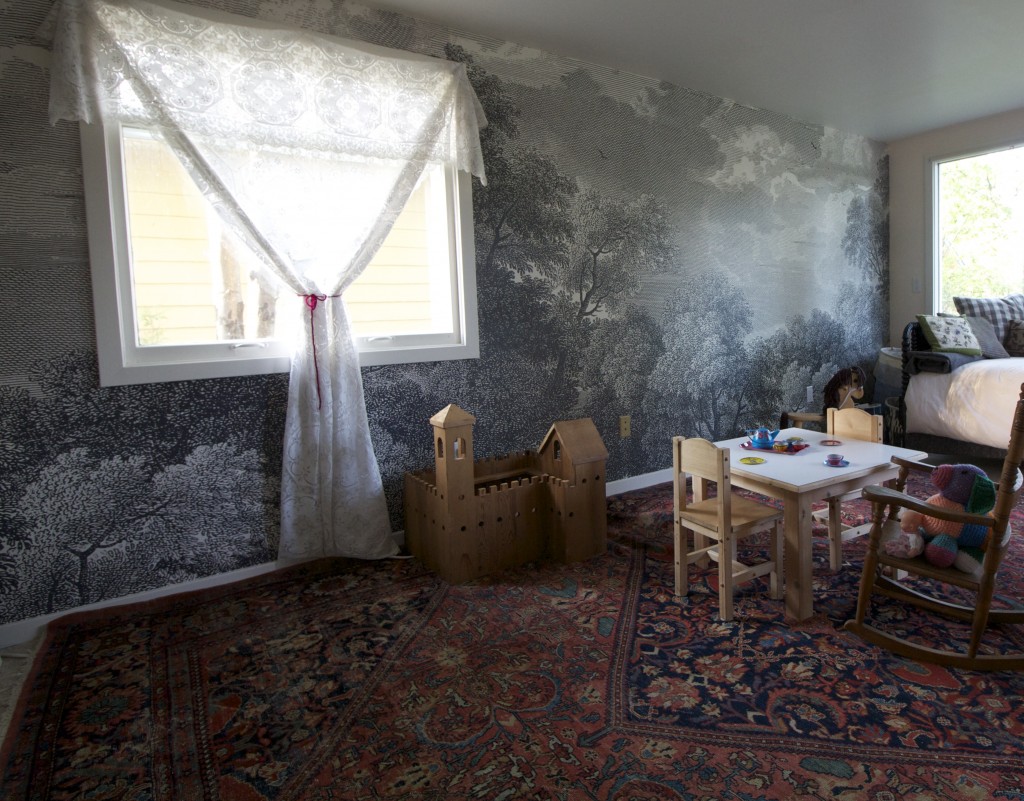 It really does make the room magical, and most importantly, Opal loves it. 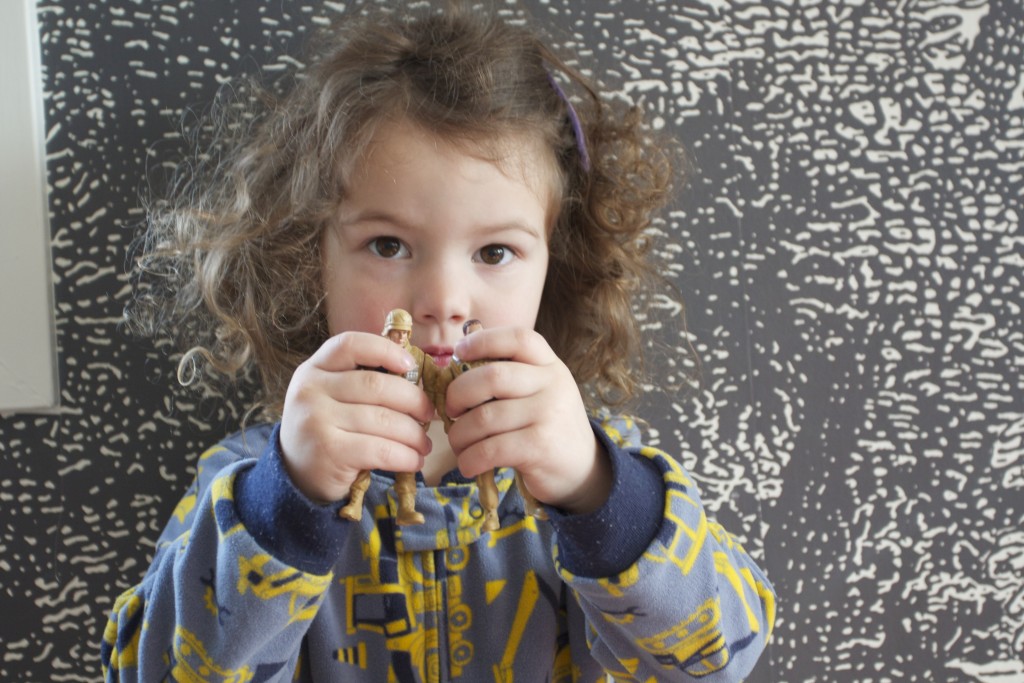 Opal in her favorite construction equipment PJs, making her ‘camping guys’ (action figures from the thrift store) pose for the camera.  I could (and do) stare at those eyes all day.

The rest of the room is coming along, and I’ll share the full reveal soon.  Thanks everybody!