My Grandma Mary, my mom’s mom, was a warm and fiercely independent woman who raised three kids completely on her own. Frugal by necessity, she kept the original receipts and packaging for every purchase, and cared for her things as if she might return them to the store at any time.

The year she died was the year I started law school.  Katie and I took the Alaska Ferry down to Washington that fall, and I moved into a house in North Seattle.  At the same time, my family was working on clearing out Grandma’s house to put it on the market.  I had no furniture, and because of the timing rather than a bequest, I was the lucky recipient of Grandma’s couch. 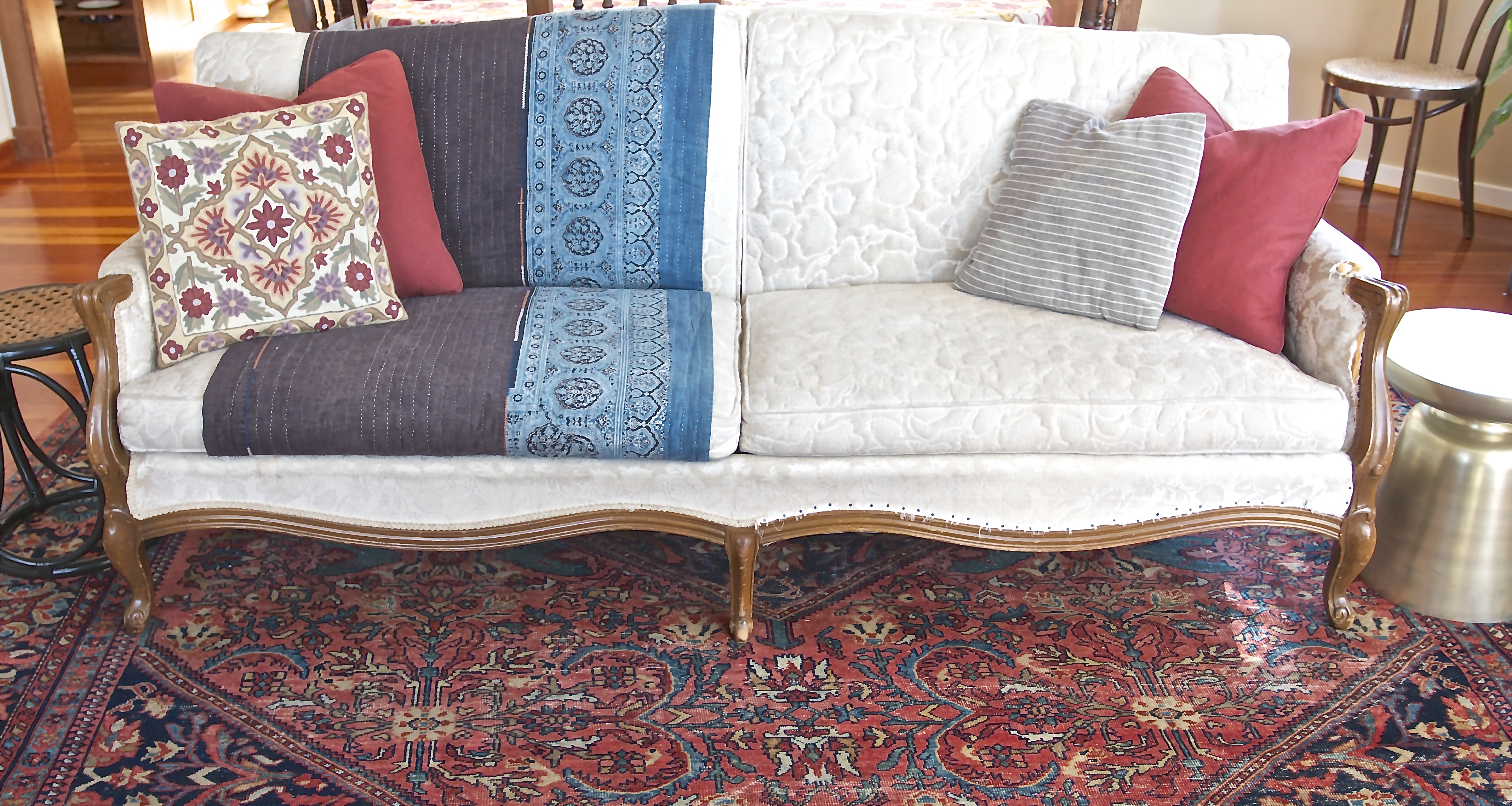 As you will soon see, the kantha quilt is there by necessity.

In Grandma’s house the couch was in the parlor–a fancy room in an otherwise unfancy house.  I really only remember one thing about the couch in her house: it was covered in plastic.  When I got the couch, it was gleaming white, not a stain, smudge, or loose thread. 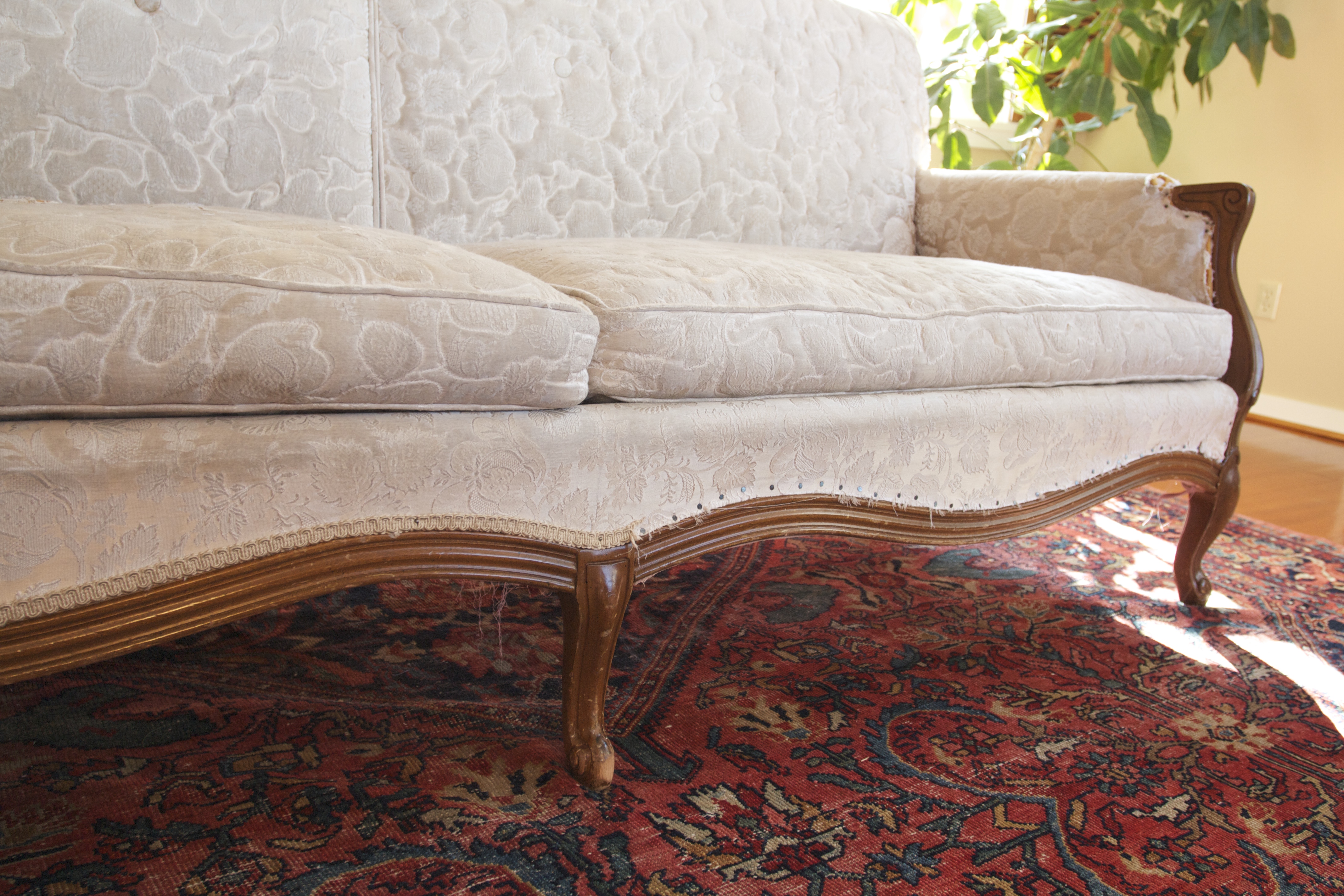 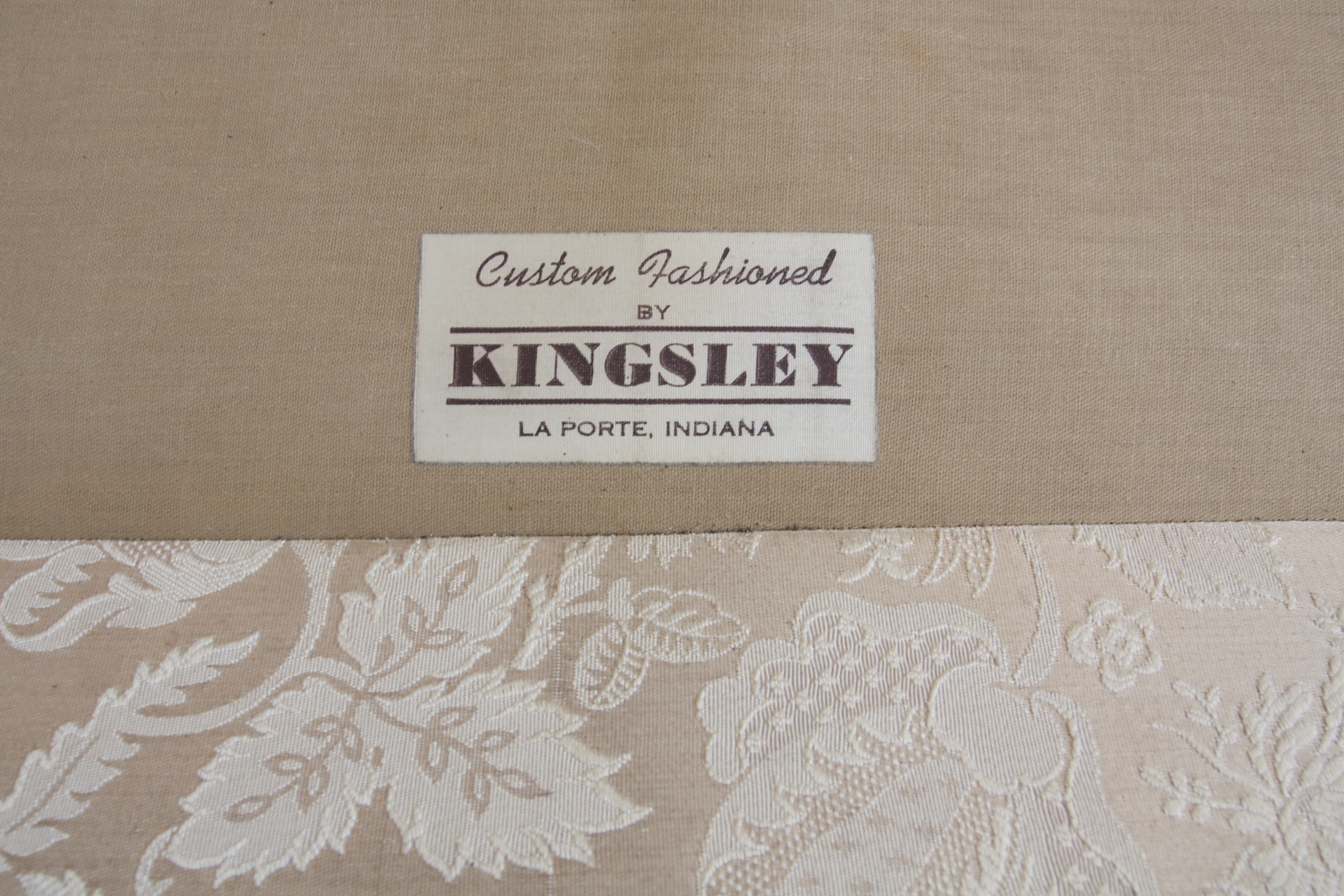 In my house there is no room reserved for things that are fancy, no parlor or formal dining room.  I didn’t keep the couch covered in plastic.  I did try for a brief time to keep the animals off the couch, but that didn’t last very long.  Because really, I like to cuddle with my animals, and where better to do that than the couch?  But the lack of plastic plus creatures has taken its toll. 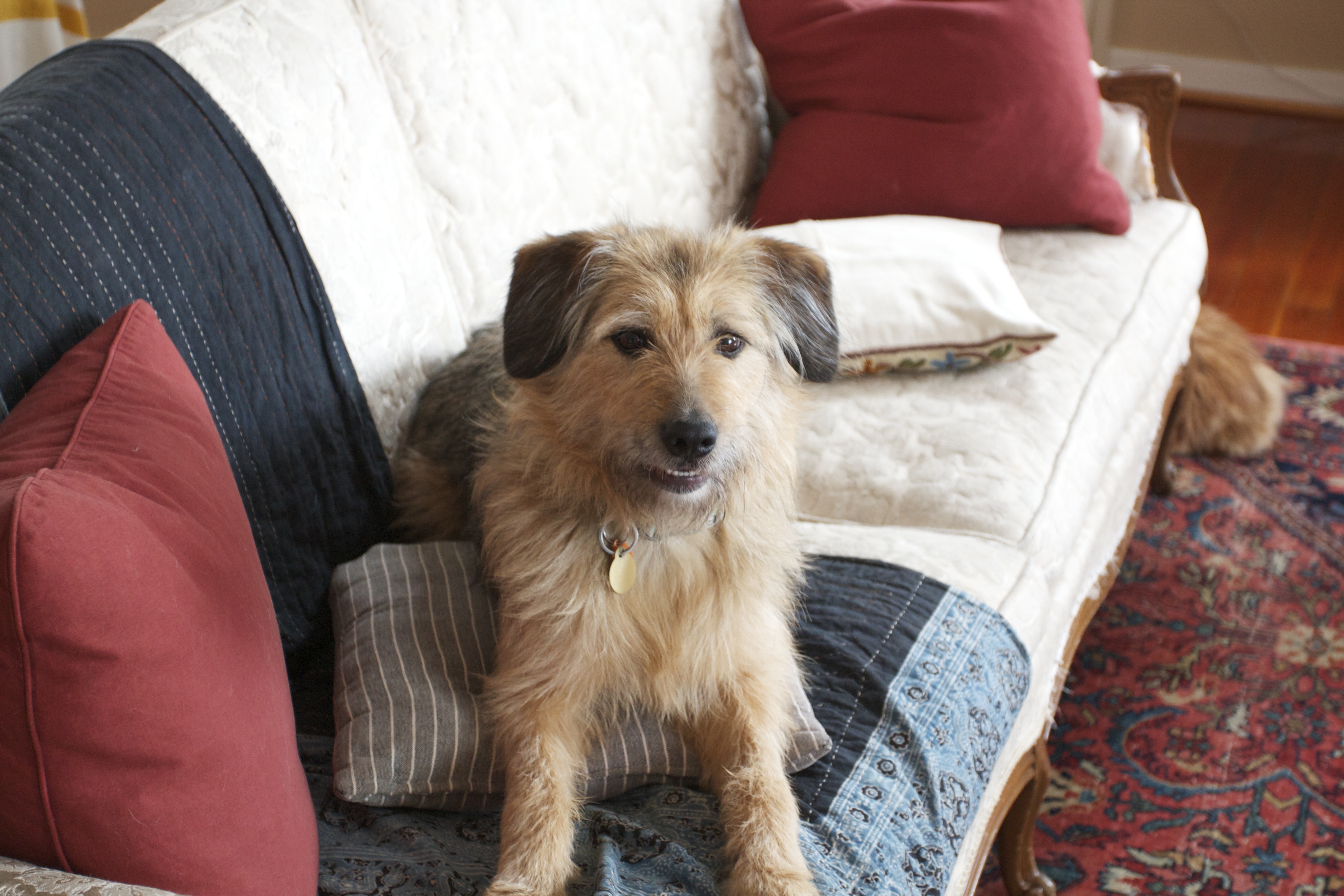 This is Winnie. She came to us just two weeks ago and is already making herself at home on Grandma’s couch. Officially we are fostering her, but I think we all know how this story ends.

I cringe when I think about how carefully my Grandma preserved this couch for all of those years, and what a symbol of accomplishment it must have been to her.  In the thirteen years I’ve had it, the upholstery has torn in multiple places.  I’ve flipped the cushions to hide stains, only to reveal an earlier stain that I’d dealt with in the same way.  My dog Cora, smelling an ill-fated dobbin, chewed off most of the trim to get to the glue. 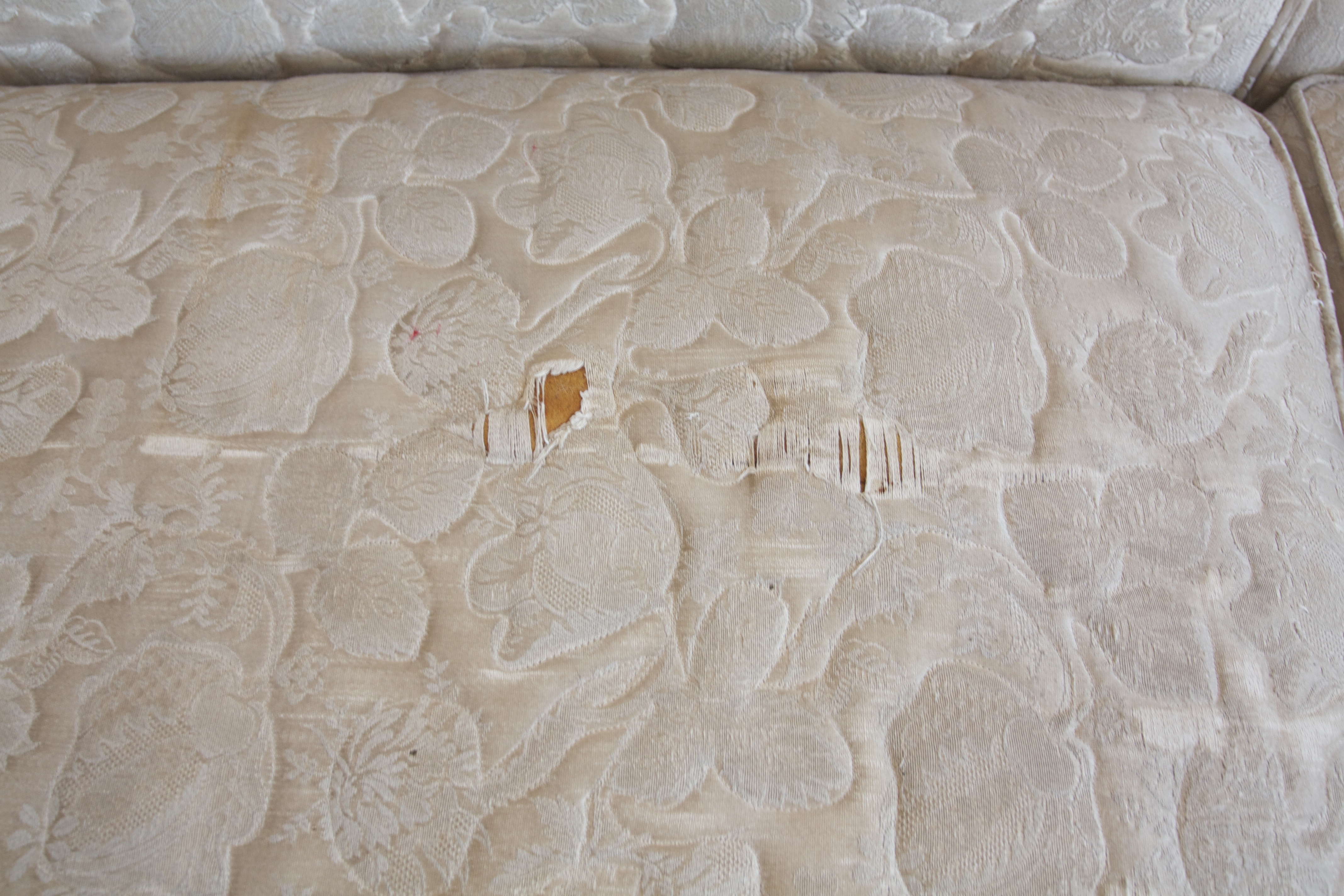 It may have seen better days, but I do cherish this old couch.  I love its swoopy lines and carved feet and arms.  I love that it’s long and comfortable enough for a nap.  Most of all, I love that it belonged to Grandma Mary.  I like to think that my daughter is touching the same spot that Grandma Mary did, even if it is with peanut butter smudged hands. 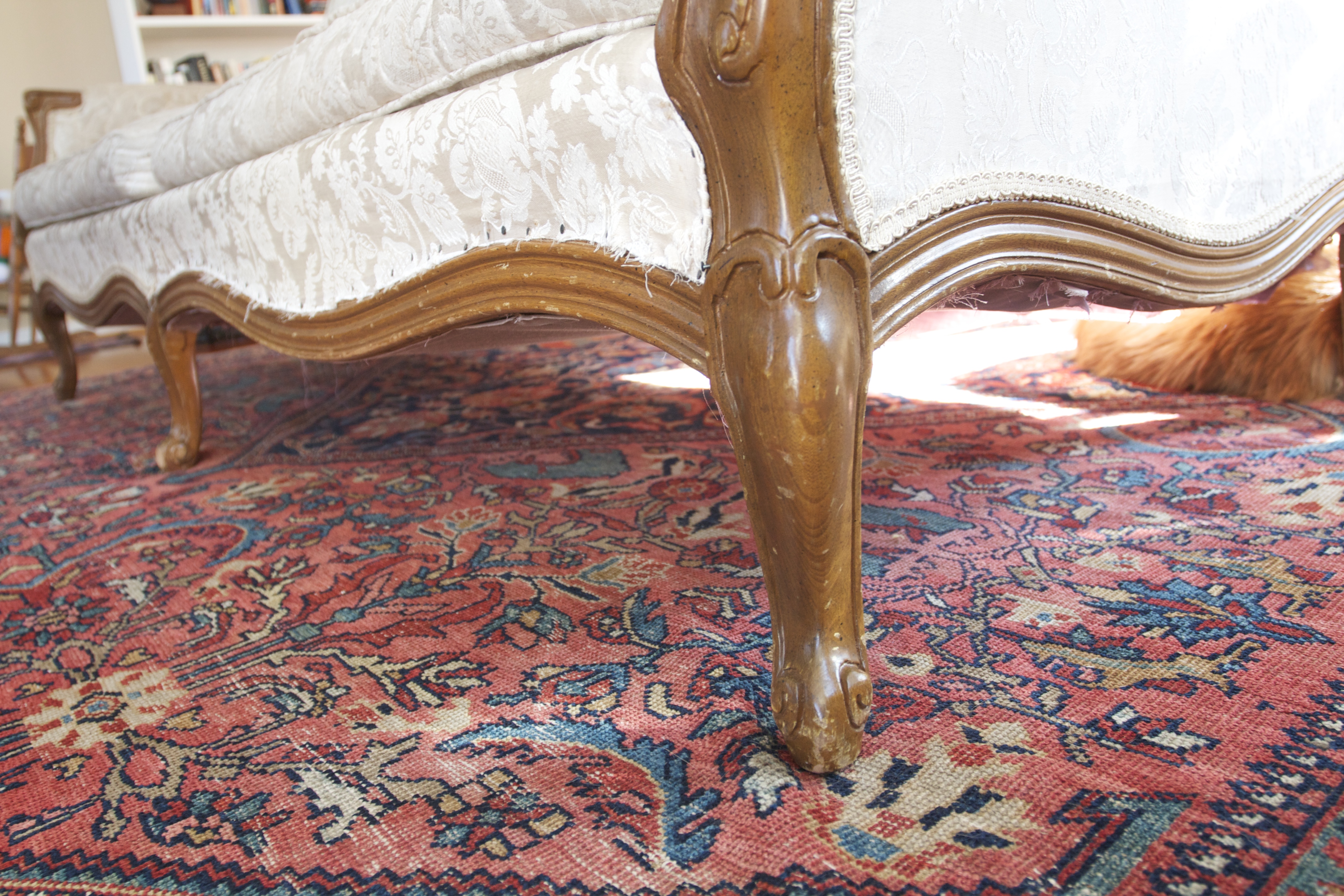 Dust bunnies have been known to grow to epic proportions in my house, but that particular blob of fur you see under the couch is Wolsey.

I hope that Grandma would be pleased by how much we love this couch, even if we show that love by using it instead of keeping it perfectly preserved.  The kantha quilt covers the worst of the tears and for now I like the way it looks tucked into the cushions–it goes with my world-traveling granny chic style.  But reupholstering the couch is a project for the not so distant future.  Obviously I need to use a durable fabric, and even then I can probably only reasonably expect another thirteen years at the rate we’re going.

Here are some thoughts for its next incarnation: 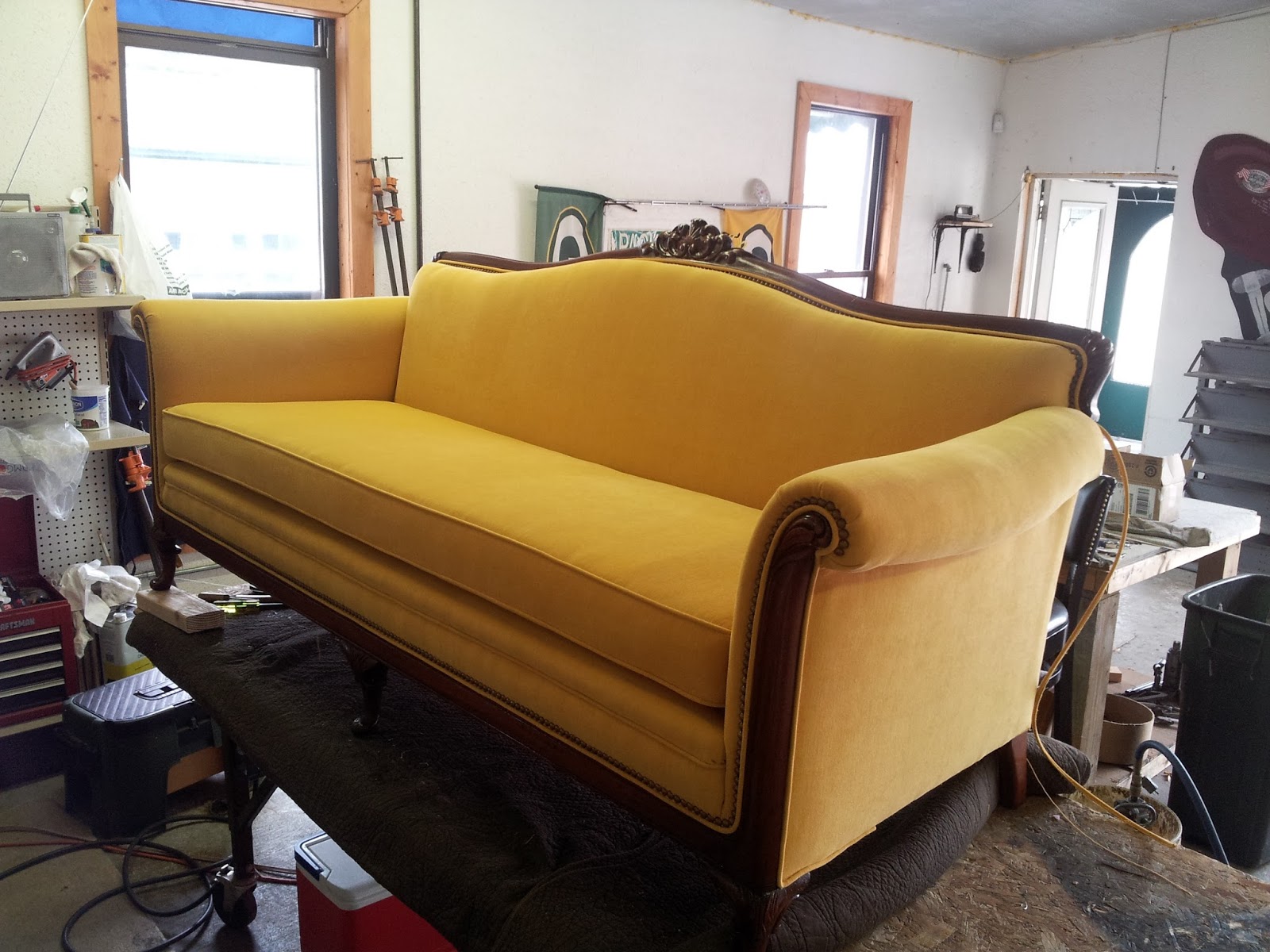 I love mustard, condiment and color alike.  The color of this couch is insane and that is fine by me.  I like the single seat cushion, but this one has a marine upholstery look to it that isn’t particularly inviting.  Down wrapped foam is probably the way to go. 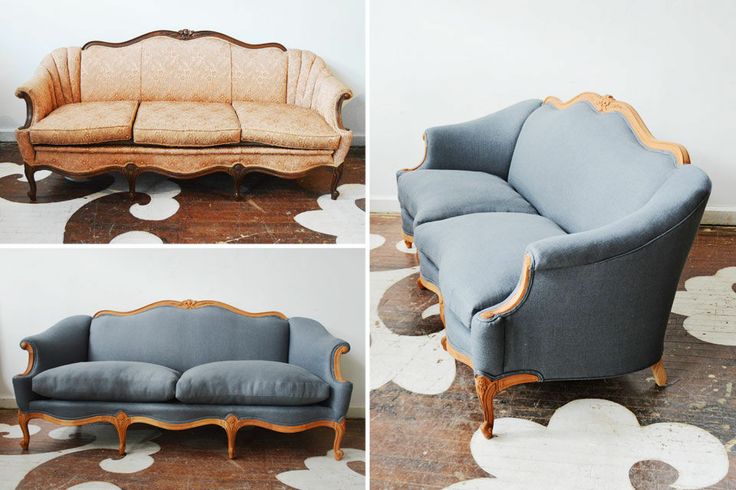 Mercy.  The company that reupholstered this beauty, Chairloom, has tons of examples that set my mind spinning.  I am crazy for the way that they took the legs, back, and arms down to the raw wood.  It makes it look so much fresher.  I would love to sink into those fluffy cushions and rest my cheek on that northern sea blue-grey linen.  You know who else loves linen, or textured fabric of any kind?  This guy: 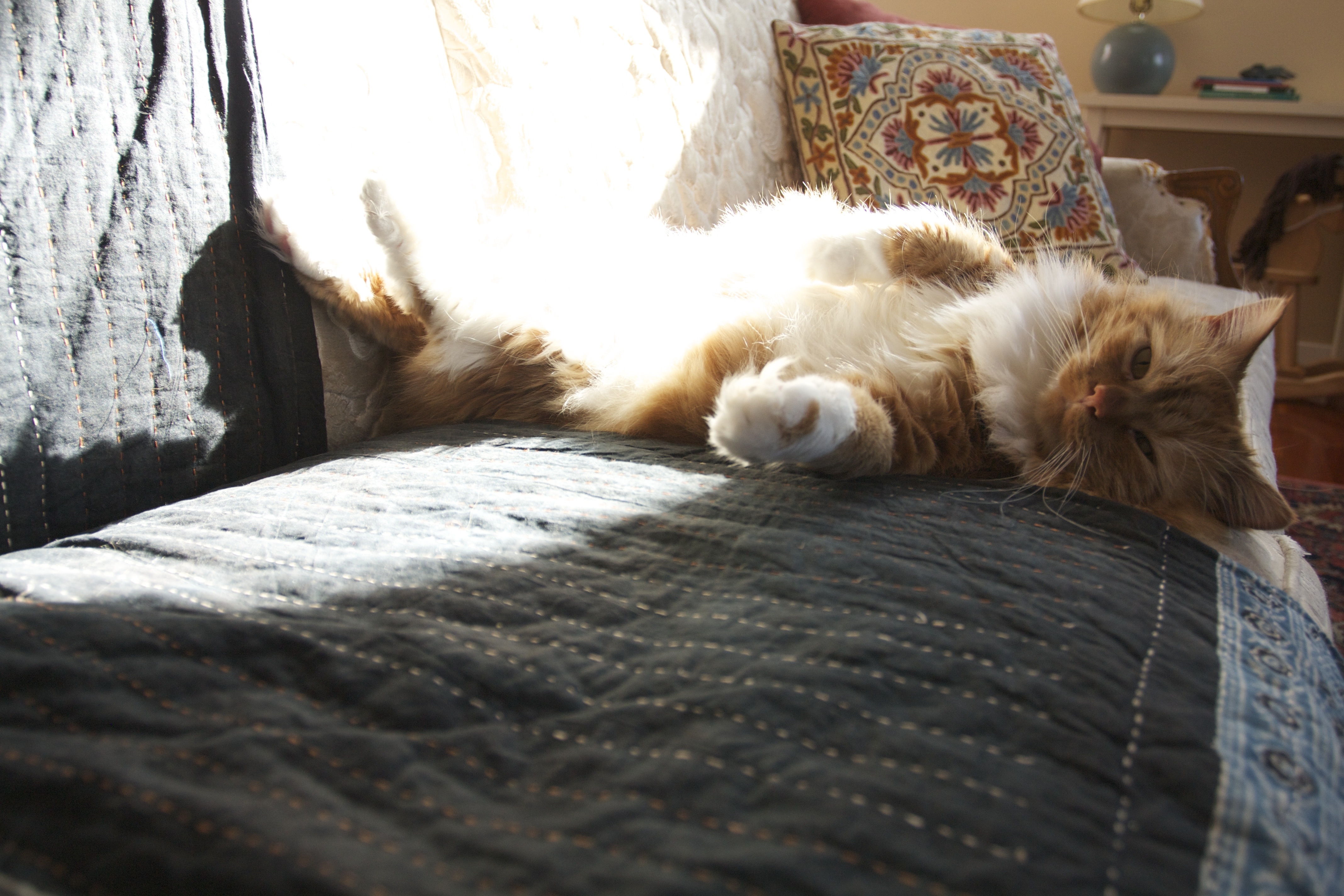 He may look sweet and defenseless, but he keeps his claws sharp as quills. Linen doesn’t stand a chance. 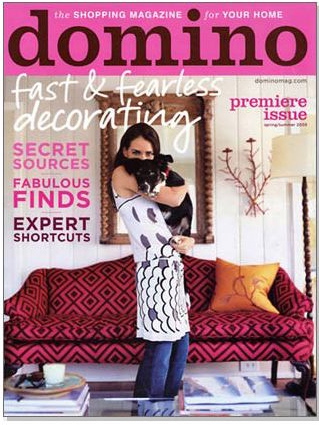 Remember Ruthie Sommers’s amazing couch from the inaugural edition of Domino?  This cover is from 2005, which I think proves that a bold choice is sometimes the most enduring.  And look, she has a dog too, right?  (I acknowledge that a dog is not the same as two dogs and two cats but still).  I would love to do something like this, but it would mean all new everything to pair with it, and that I’m not up for.

Here’s another inspiring reupholstery job from Chairloom, my number one favorite option that I’ve seen so far: 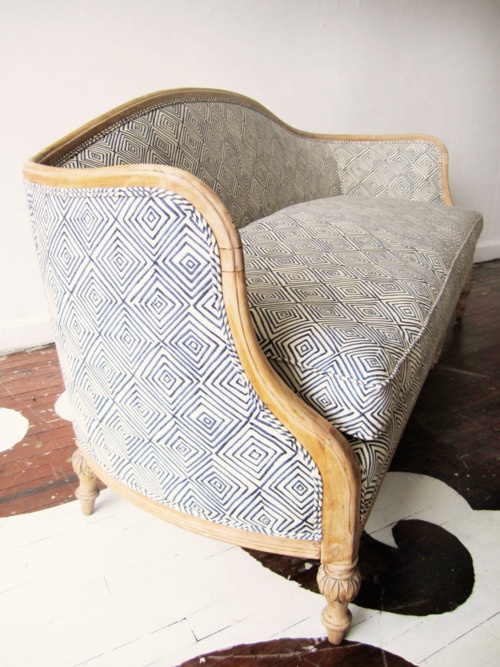 Again, the raw wood.  I’m also crazy for the way the hand-drawn looking geometric print contrasts with the formal stature of this classic couch.  Plus the pattern would help to conceal inevitable stains, and the blue and white would fit right in in my living room.  I think Grandma would like it, too.

How do you balance real life, stains, snags and all, against having beautiful and cherished furniture?  Care to vote on which option I should lean toward?  I’d love to hear your opinion on this one!

24 responses on “Couched in History: Thoughts on a New Incarnation for Grandma’s Couch”