Maira Kalman’s children’s book What Pete Ate From A-Z begins with this description of Pete the dog: “A good dog, a very good dog, but sometimes he is not so good.”  This perfectly describes my dog Cora.  She is a magnificent dog: smart, beautiful, strong, loyal, and gentle.  But on the rarest of occasions she’ll do something . . . odd. 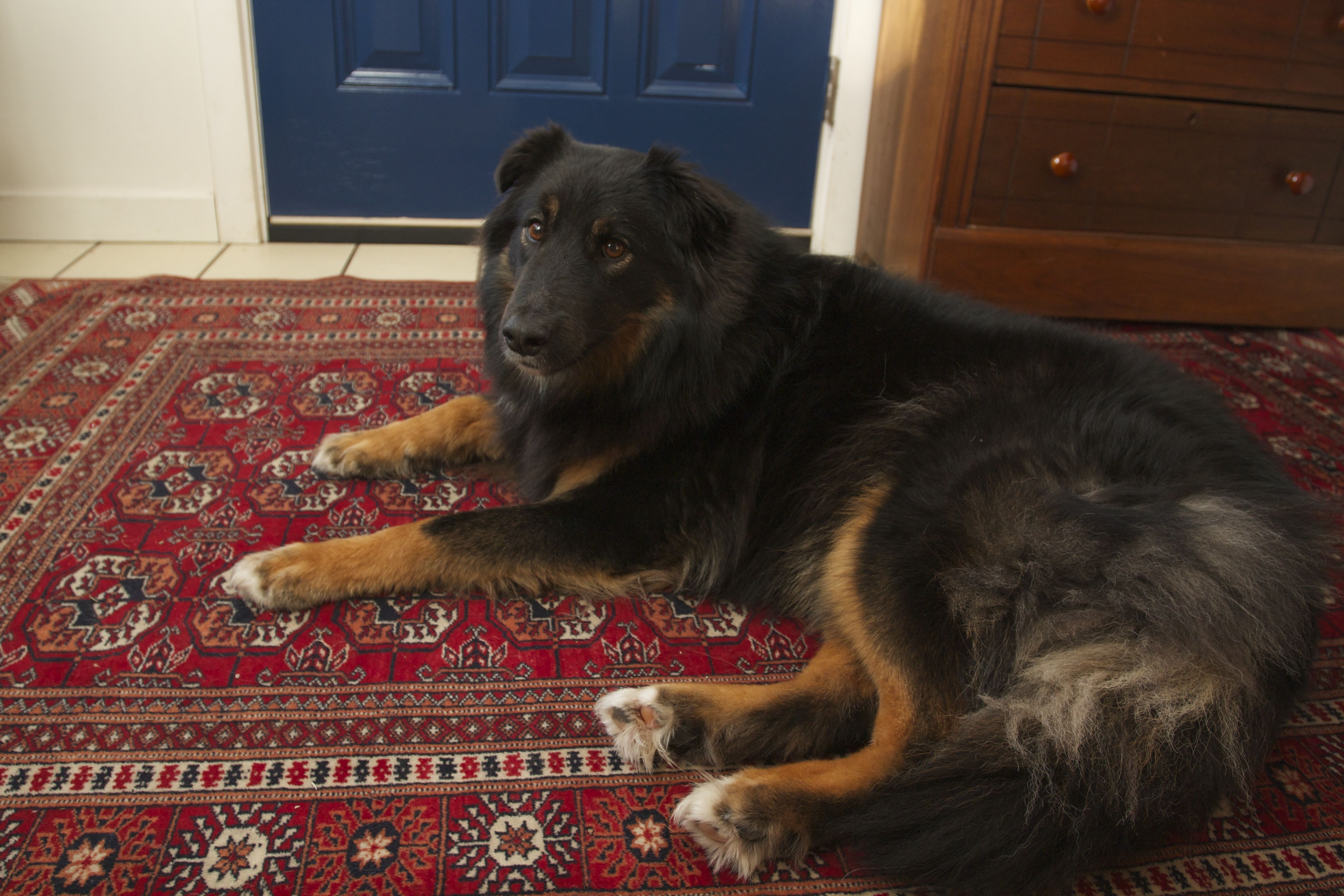 Since I’ve lived in this house we’ve had a door knob chime on the double doors leading into the entryway.  It belonged to my in-laws when they lived in the house, an homage to their black lab mix Bill.  I recently realized that the dog looked different somehow: 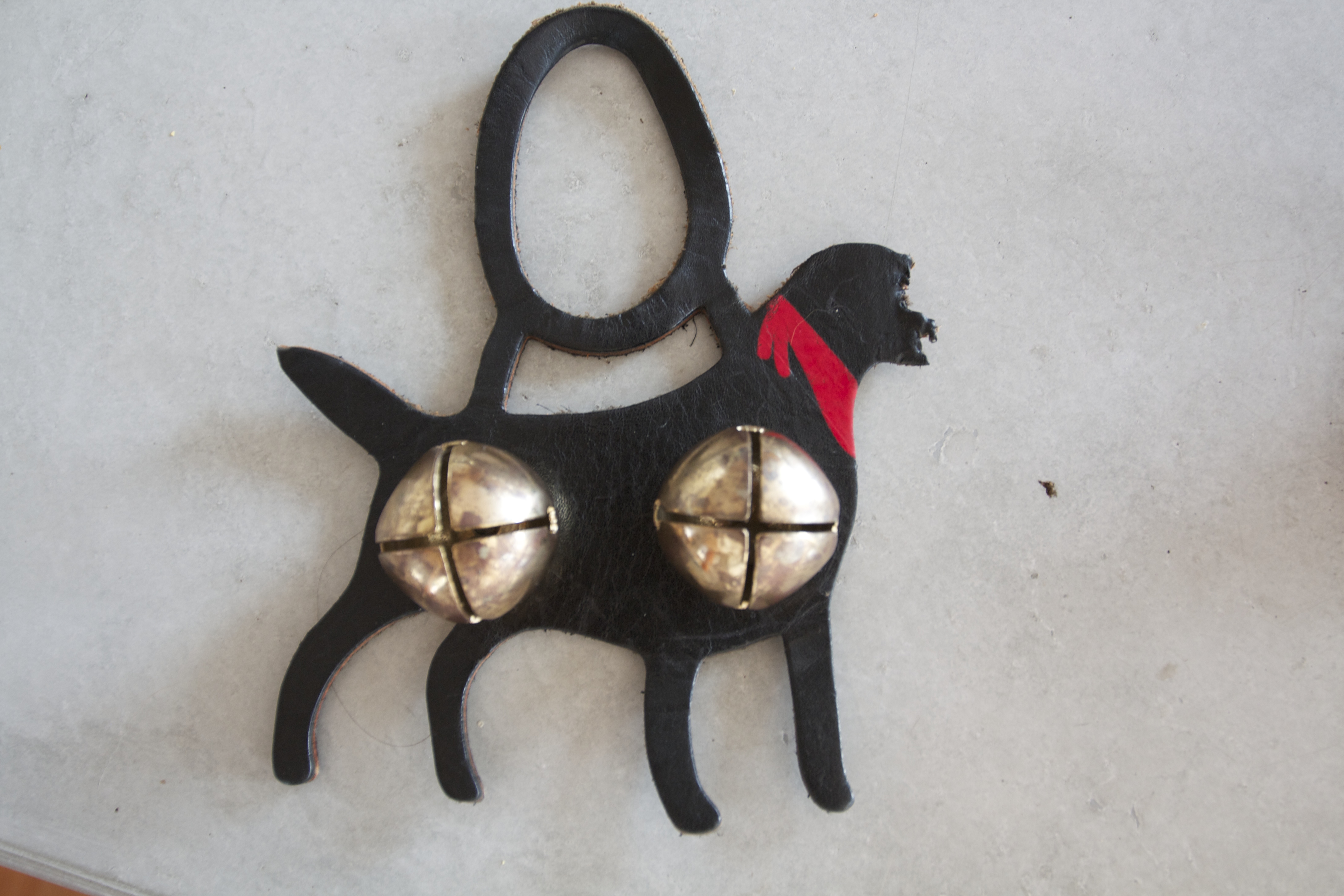 I’m not particularly attached to the chime, but I am used to it as a signal of the comings and goings in the house. I wanted to save it mostly because I think it is probably part of my daughter’s auditory landscape of home. So I set about transforming it from a decapitated black lab into a phoenix rising from the ashes. Just kidding, what I really did was make it a dickey. 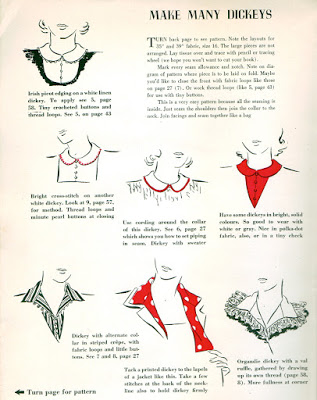 To start, I cut away most of the remaining leather to leave a rectangle where the bells are affixed. 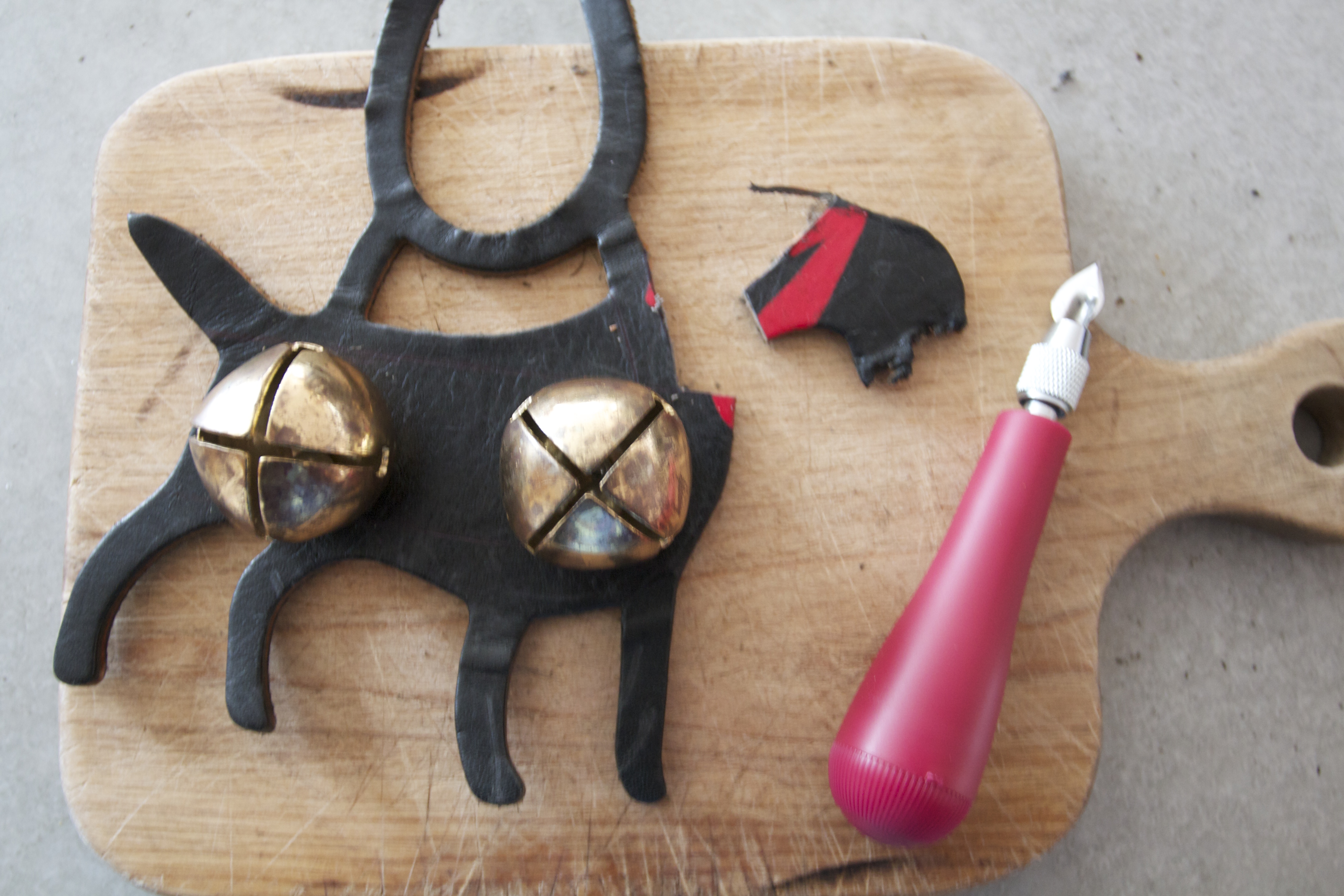 Next, I took a dark grey sheet of craft felt that I had on hand, and cut it into a flag shape. The felt is stretchy, and I cut two slits and eased them over the bells. 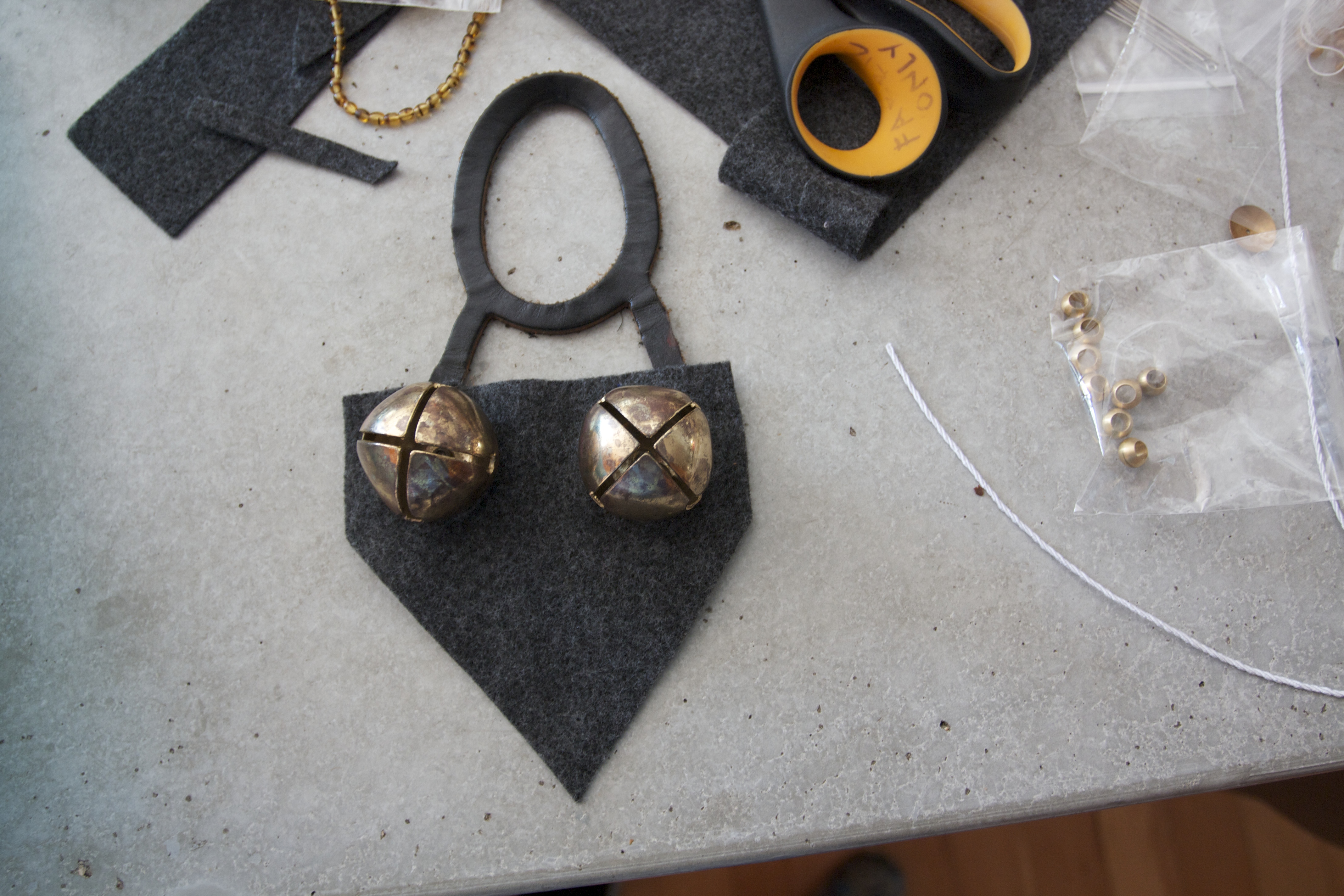 Next, I started embroidering the dickey. I didn’t draw a pattern, and I didn’t worry about making my stitches very neat. My reasoning was (1) Cora still lives here; (2) I’m not a great embroiderer, and; (3) what I envisioned making was basically a cat toy. 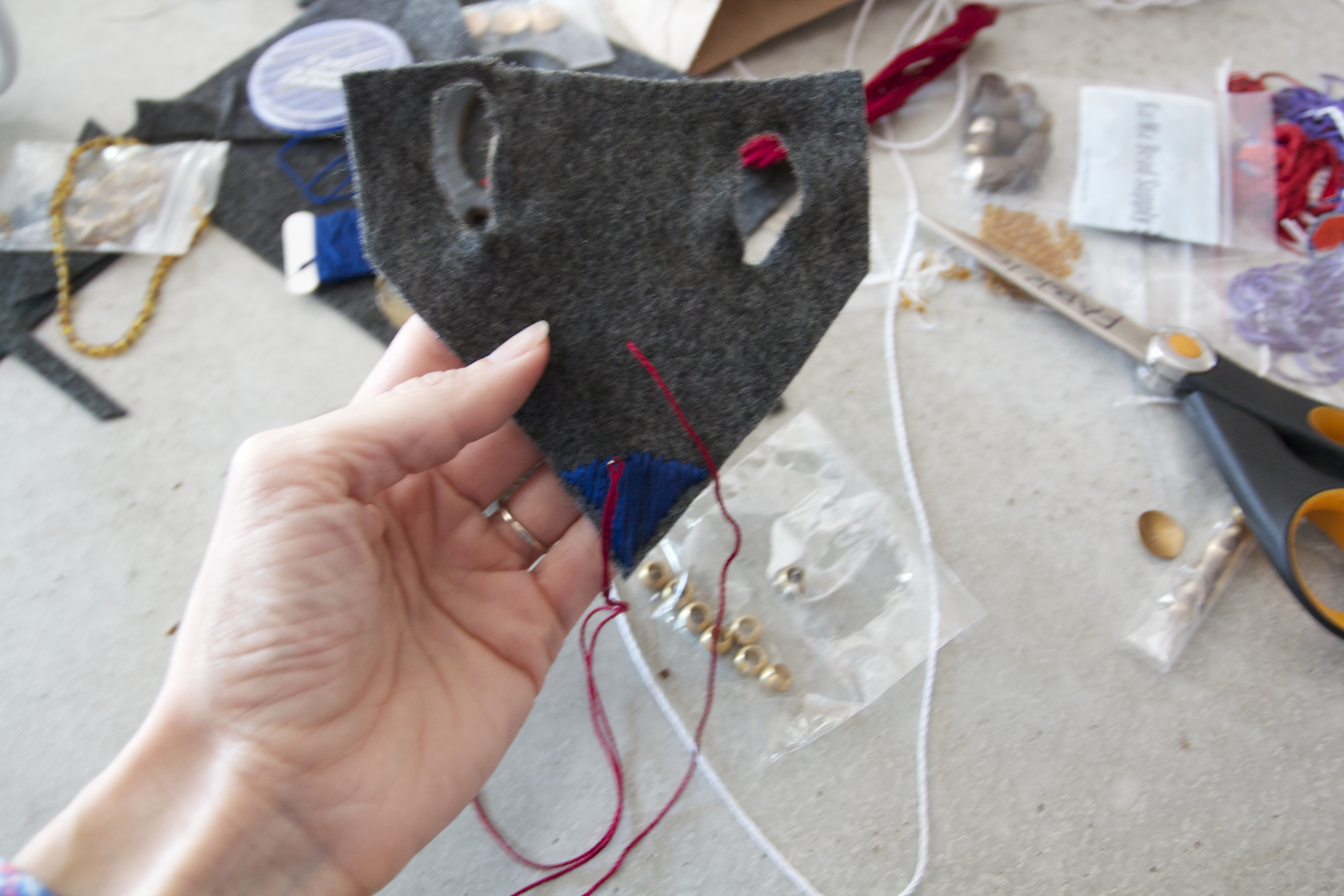 You know we’re tassel fans here at RHW, and I couldn’t let the chance go by. I followed Katie’s tassel tutorial, using bunka cord (I also used some in the embroidery). 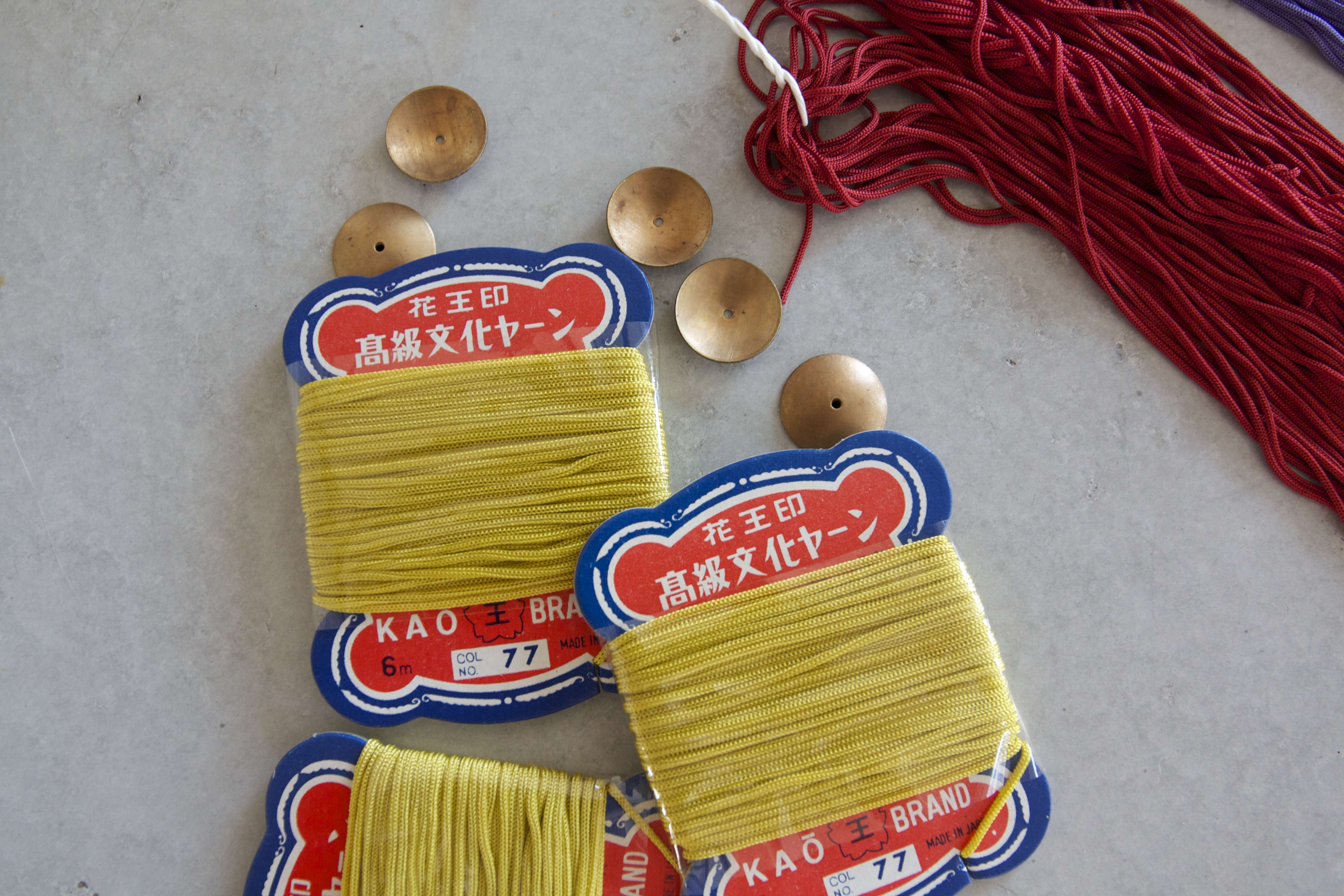 Bunka cord is a knitted rayon cord. I bought mine on Etsy.

I made one modification: instead of wrapping cord around the top of the tassel, I used a bead cap and threaded down into it.

Putting the tassel on 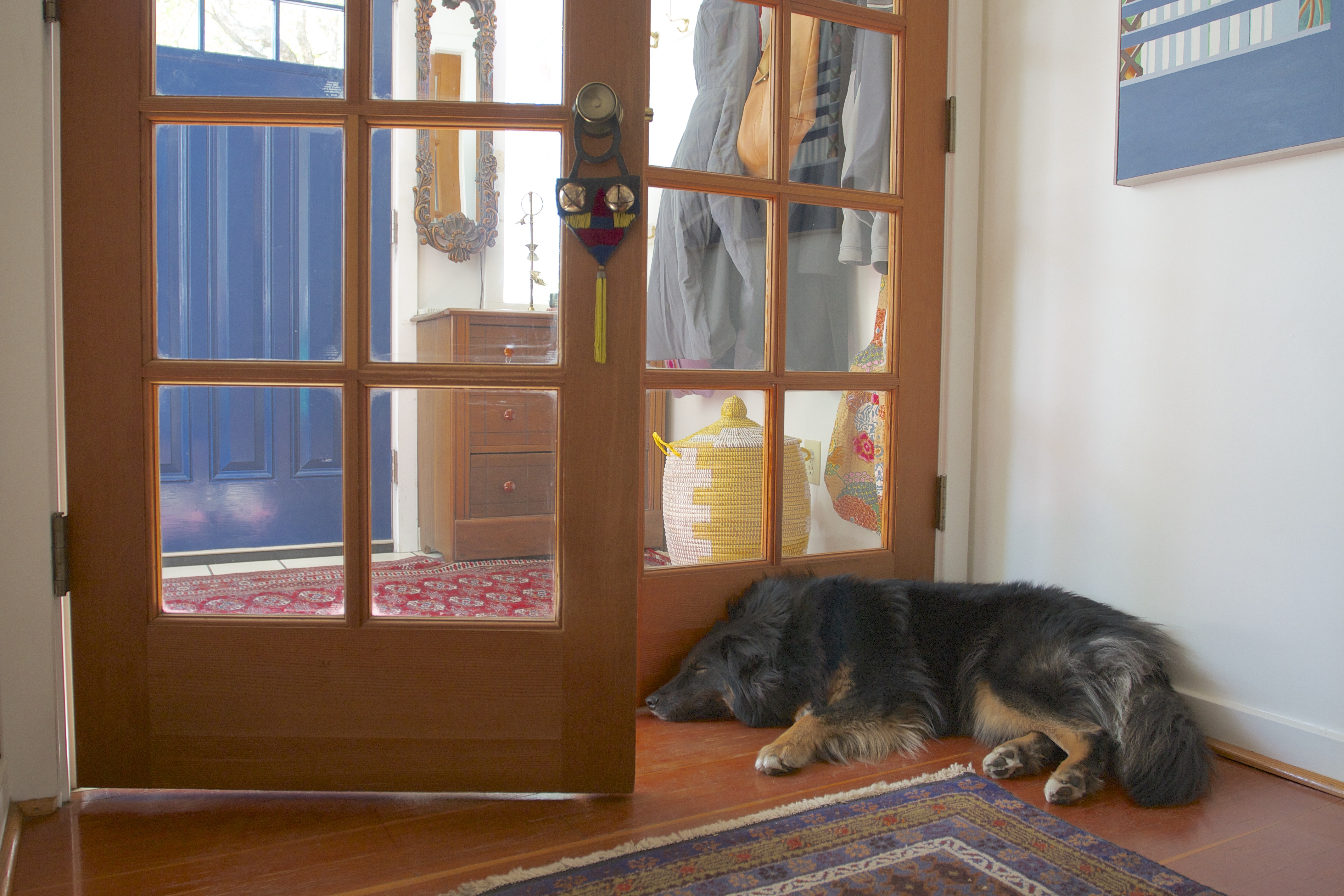 They always return to the scene of the crime.

Another Cora oddity is the way she lies upside down mashed against the door: 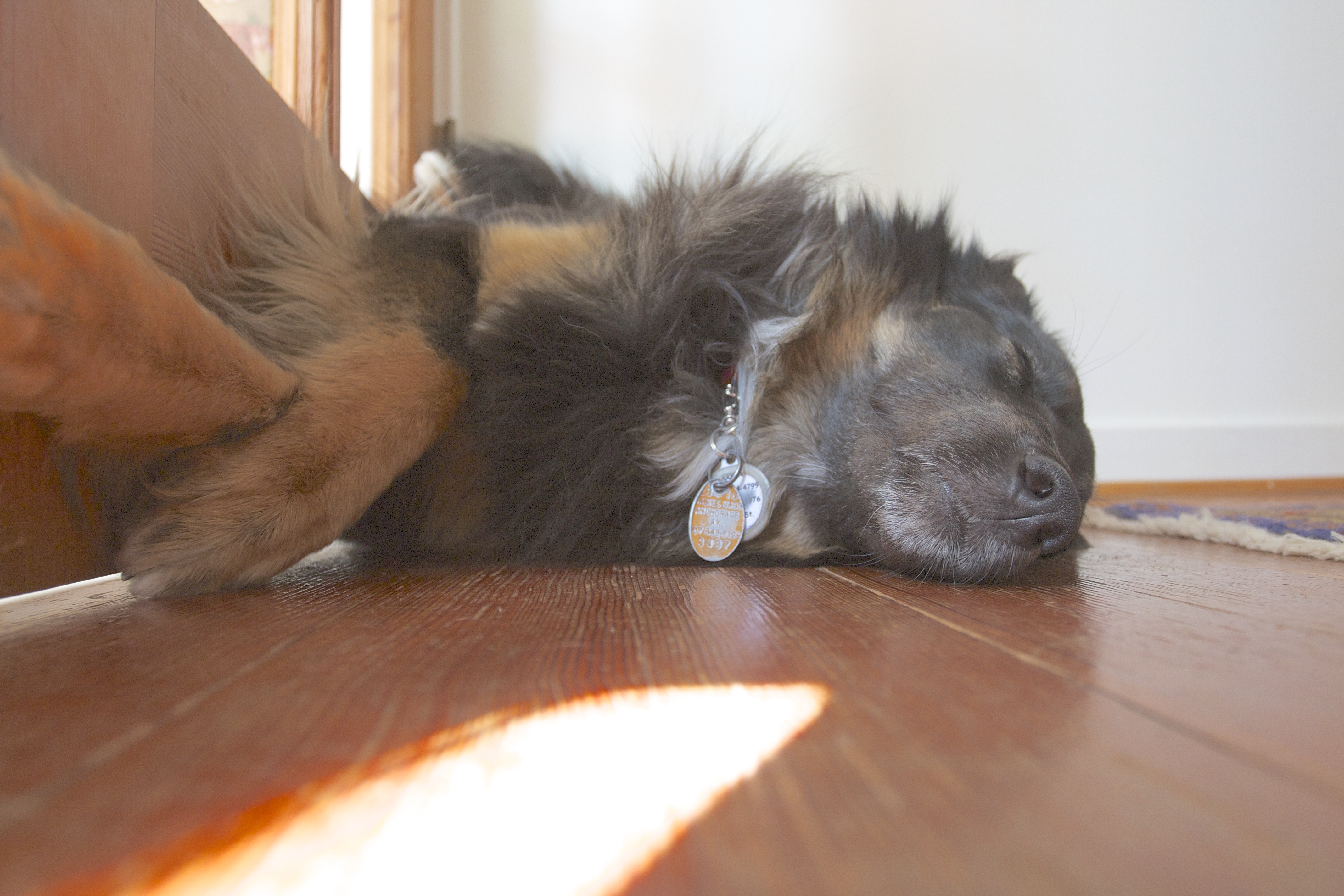 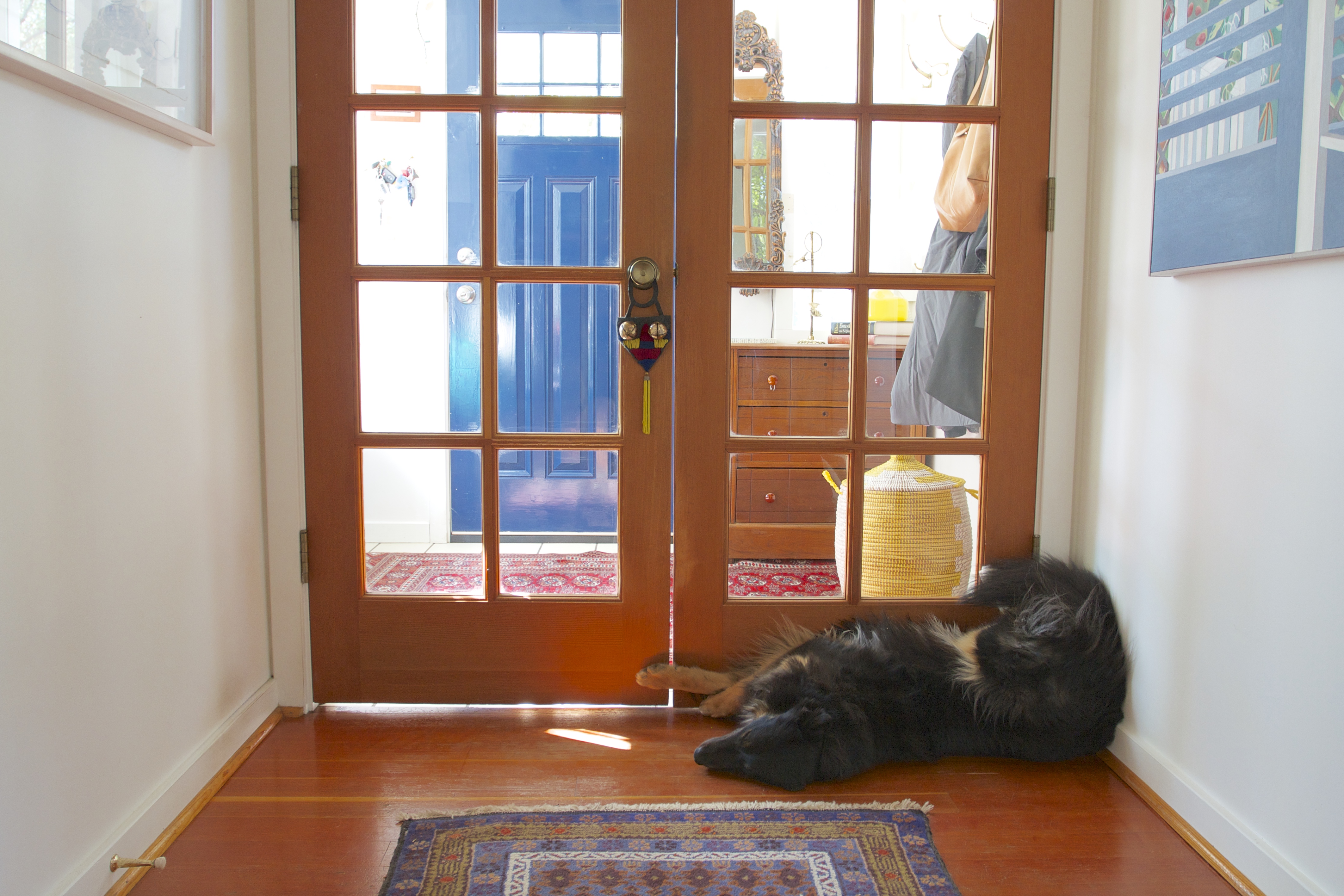 And it gets stranger still, though I can’t blame this one on Cora: 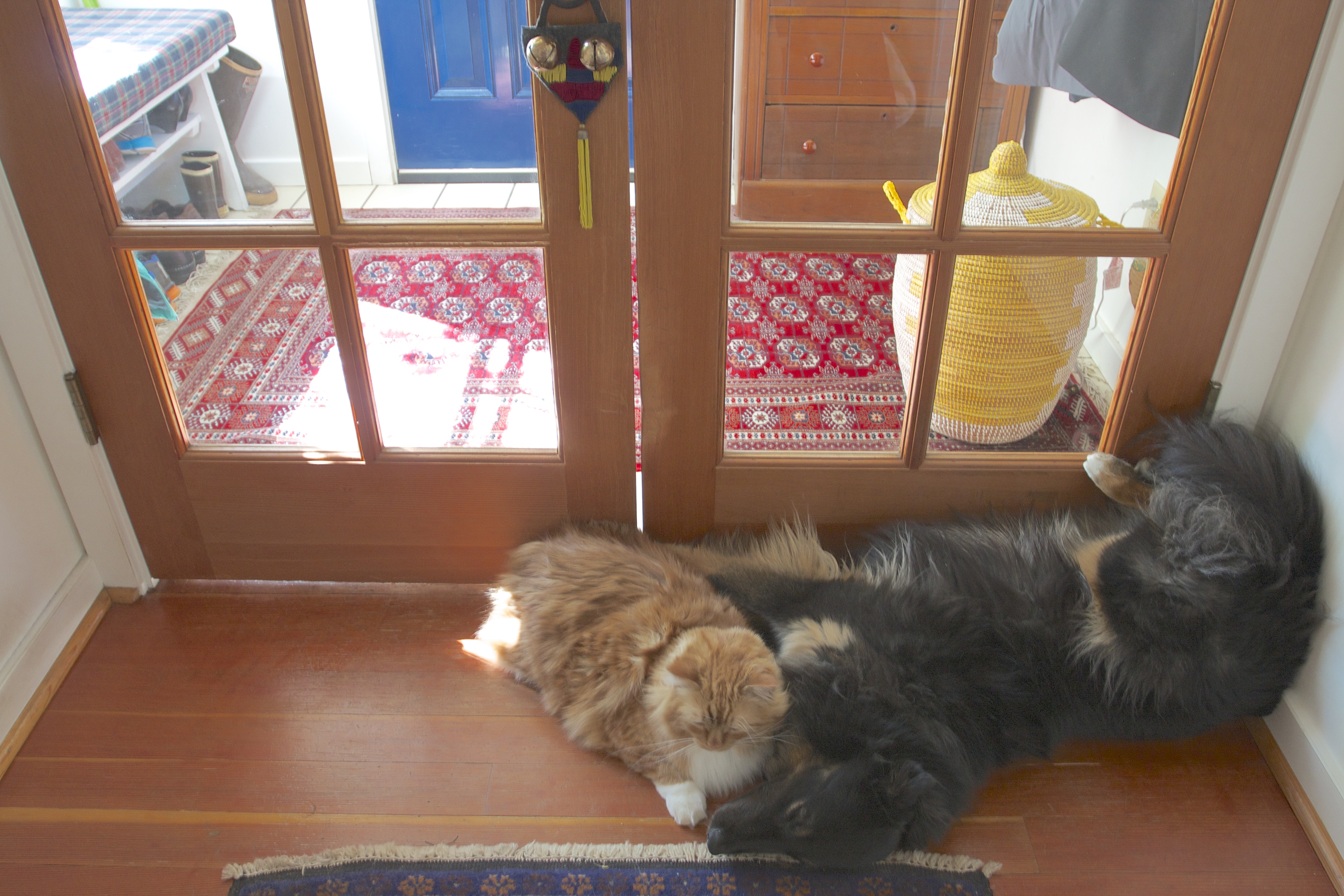 This is a daily occurrence. Aren’t they ridiculous and adorable?!

That’s all from Red House West Northern Headquarters for today. Katie is back on Wednesday with a laundry room/entryway update and next week I’ll be posting about a little interior update of my own. Have a great week everyone!

10 responses on “A Very Good Dog, Except When She is Not So Good, and a New Door Knob Chime”