The last phase of making the couch (we are so close!) is on hold while an essential package from my Mera wends its way south.  And so, with time on our hands and just a touch of masochism in our hearts, Cameron and I decided to tackle some long-dreaded projects upstairs: the painting of our stairwell and a whole lot of carpet removal.

This weekend we said farewell to the very last of the yellow paint that covered much of our house when we bought it (variously referred to in previous posts as ‘urine-tinged snow’ and ‘overcooked egg’).  Here it is in our upstairs hallway: 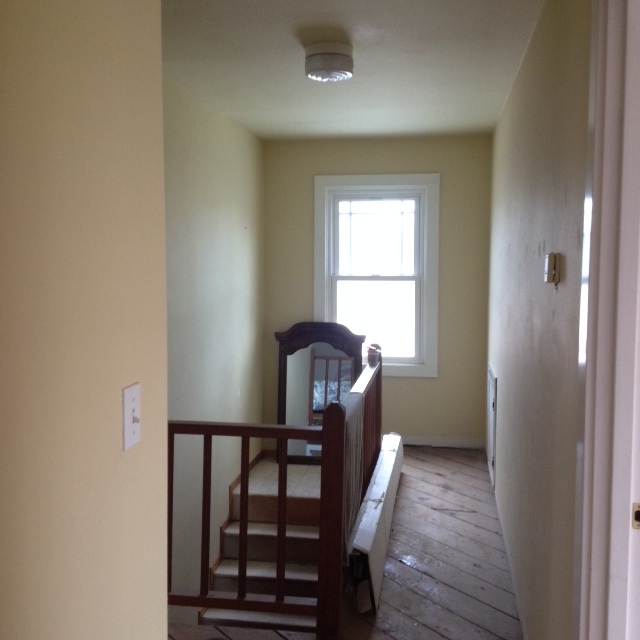 Unfortunately the photo above is not a true before – I had already pulled up the carpet before remembering to snap a picture (you’d think that after over a year of doing this blogging thing I’d remember to take photos first – but sometimes the frenzy of discovery overwhelms me).

The carpet in here was the same brownish industrial stuff that was in the Chamber of Secrets.  It was laid badly, with visible seams, and as soon as I got it out (chucked gleefully from the window – so fun!) the space felt much brighter and cleaner.

Just under the carpet was a hybrid of plywood, mdf, and planks, and I spent hours removing staples and tack strips before we decided that it needed to be entirely replaced. I don’t mind some old house squeaky-floor charm, but this one was a deafening symphony of groans, screeches, and even grunts.  We decided the extra effort was worth it, and put down some clean fresh plywood (with nary a squeak). 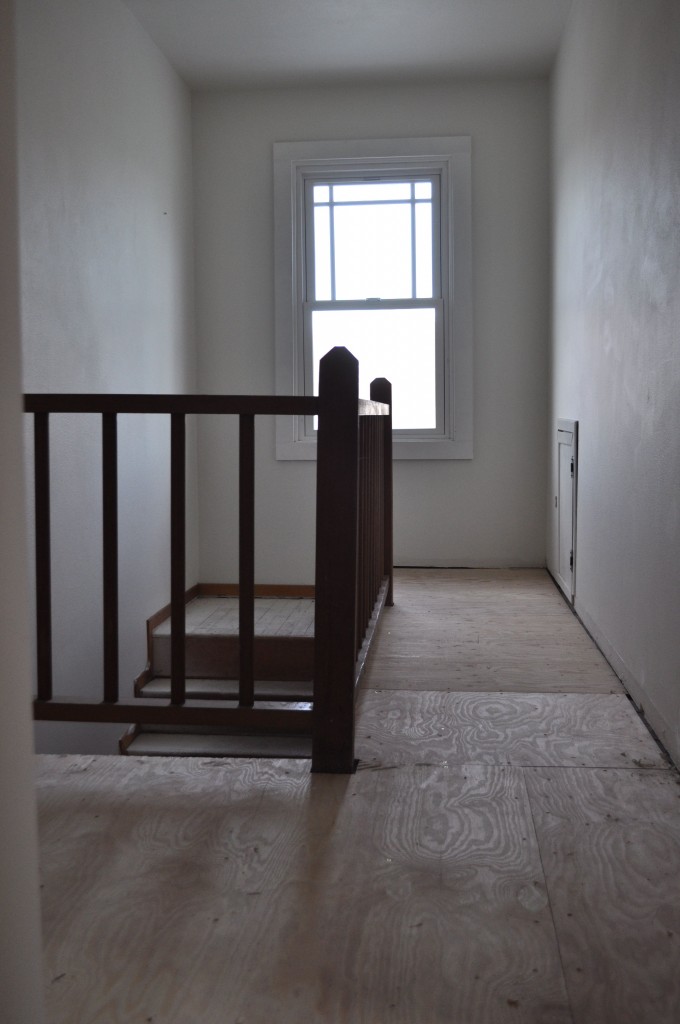 I painted the walls and ceiling with Benjamin Moore’s ‘White Dove,’ like in the Chamber of Secrets, and the plan is to lay the same hickory floors that are in the COS in the hallway and our other guest room (just out of frame on the right of this photo – I’ll share more another time).  Just the fresh paint and the new plywood subfloor is a major improvement – so clean! So quiet!

I’d been really daunted at the prospect of painting the high ceiling over our stairwell; I envisioned leaning over the banister wielding a dripping paintbrush taped to a broomstick, but Cameron had a better idea.   He quickly screwed together some scrap wood to make a bridge on which I could stand and paint, suspended above the gaping abyss. 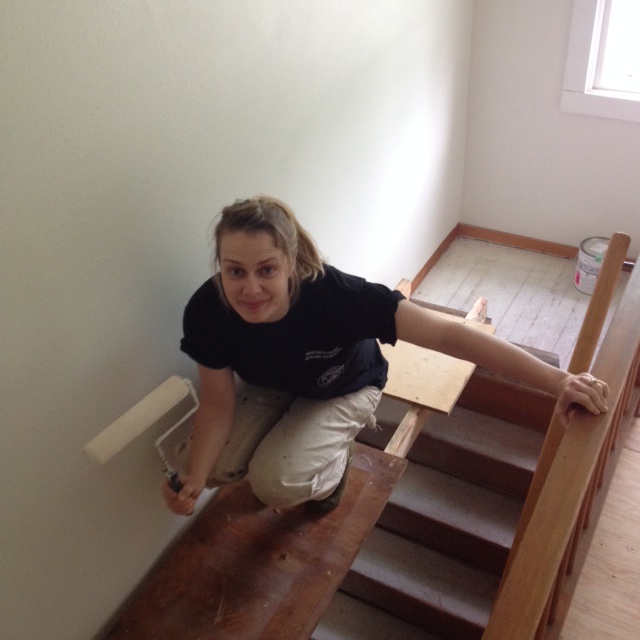 Though I failed miserably at taking before photos of the hallway, I did manage to snap a couple of the stairs while they were still carpeted.  Our stairwell is narrow and steep and we were initially worried that removing the carpet would make it treacherous, but it’s actually the opposite! The thick carpet that curved over the lip of the tread was a tripping hazard – the bare wood is much less slippery and a huge improvement. 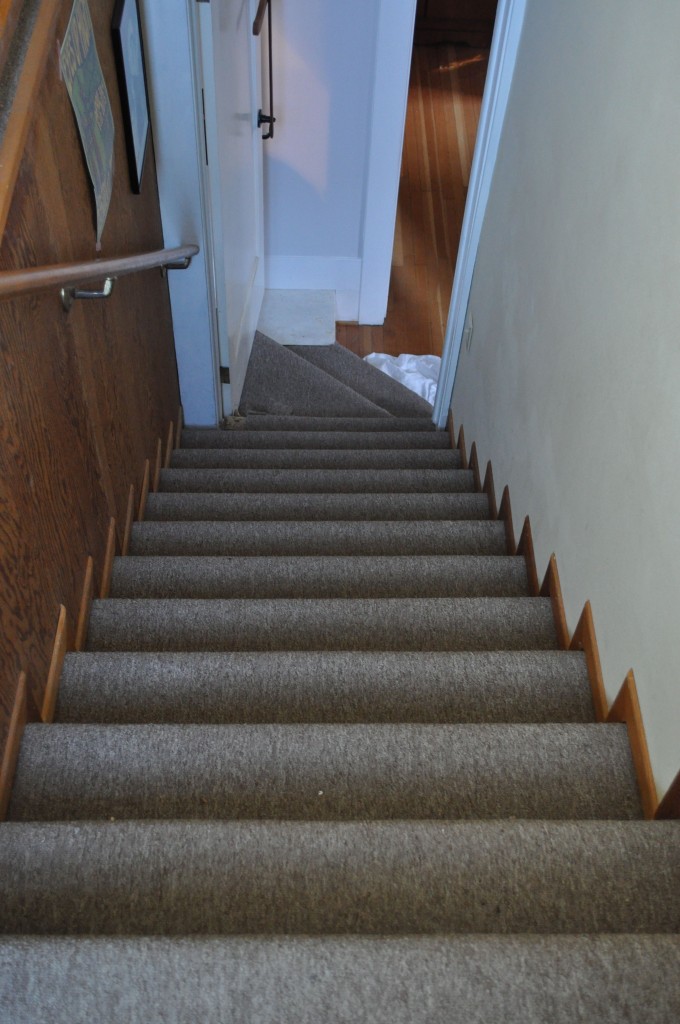 Descending into the family room

Just look at the carpeting job on the bottom step – she’s a beaut, Clark! 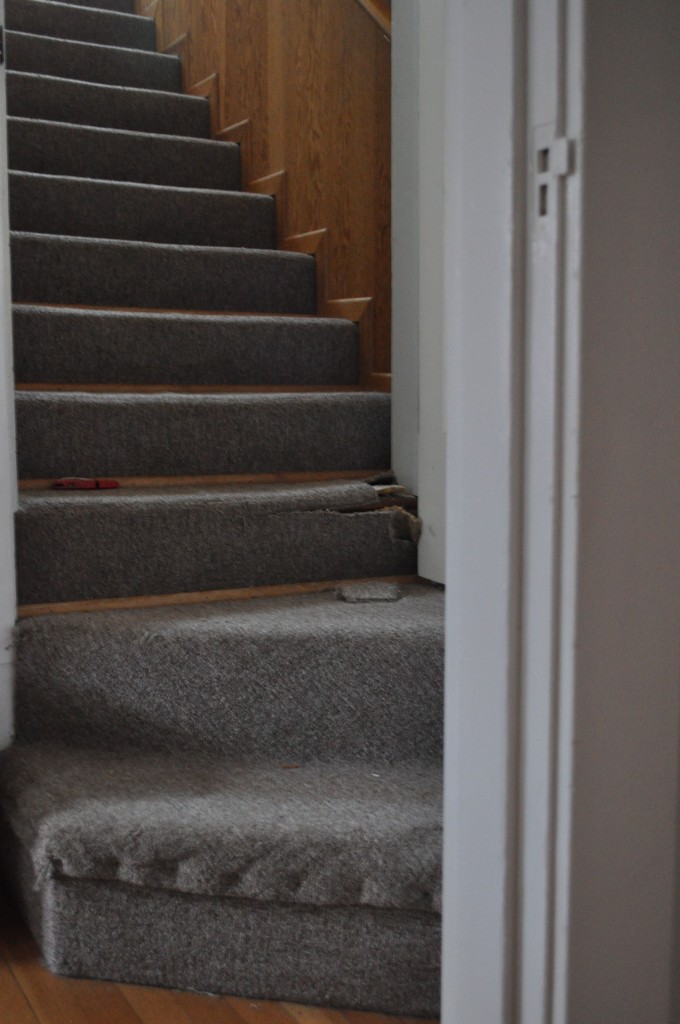 When I first started pulling the carpet from the stairs I felt a frisson of excitement at the sight of wood.  Alas, it’s past restoration… but don’t worry, I’ve got a good plan! 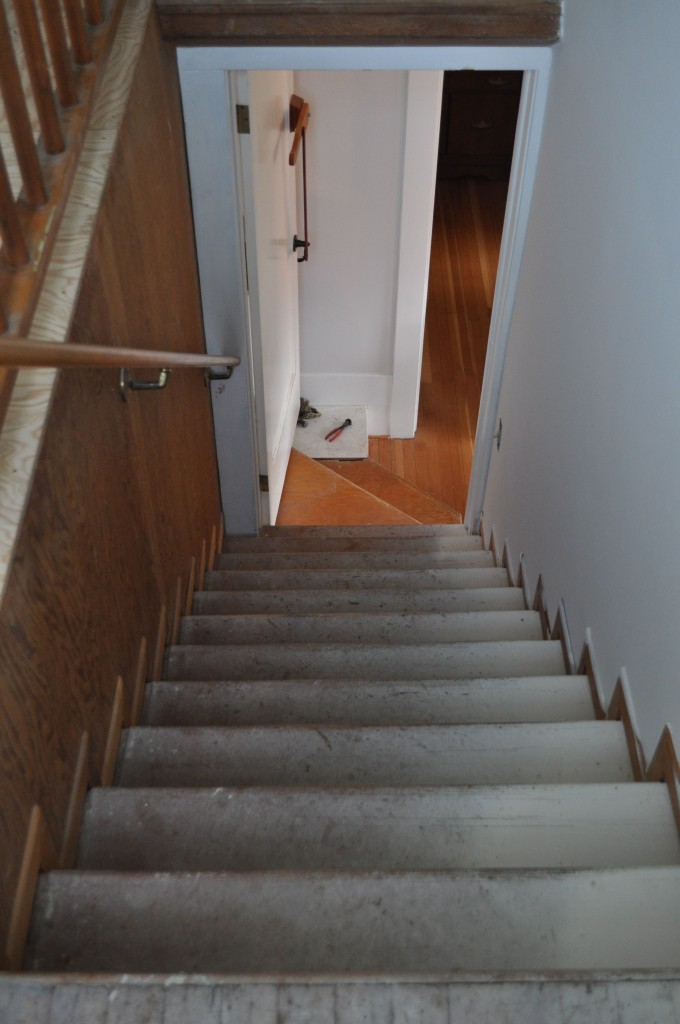 The white is overspray from drywall texture, which is proving to be a bear to remove. 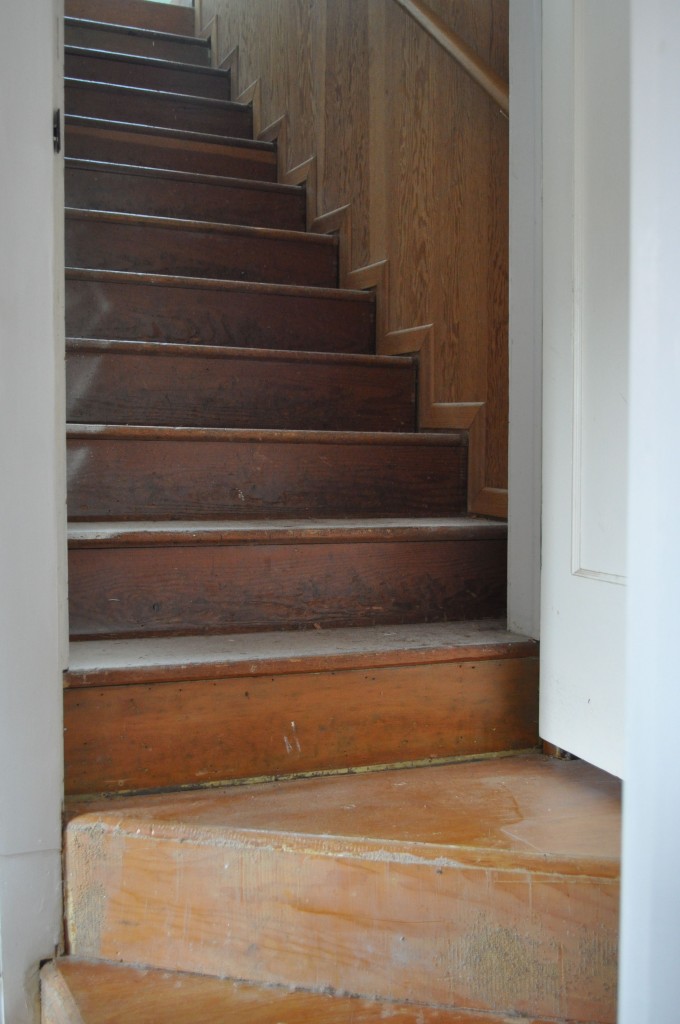 I’m strangely fond of the weird plywood wall on the right (it’s very Scandinavian, right?  Right??), and with the crisp white wall on the other side, I’m almost 100% decided that I’m going to paint the stairs a solid charcoal grey. Here’s some of my inspiration: 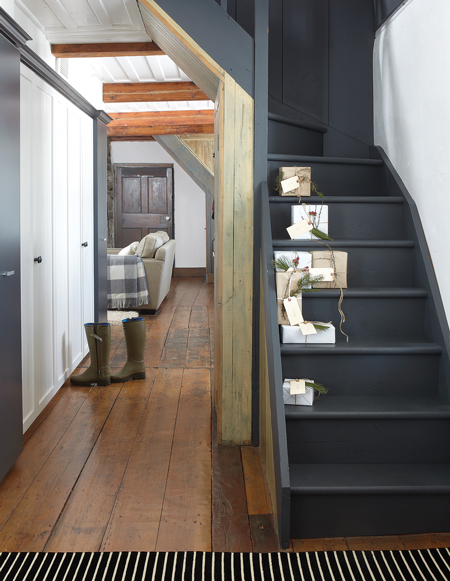 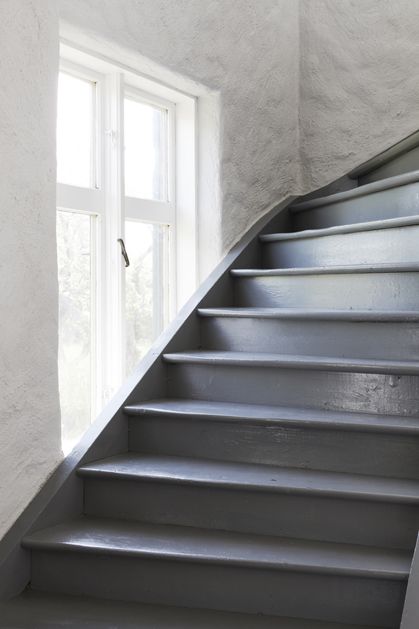 So pretty, right?  We can always add a runner if we feel like we need one down the road, but for now I’m beyond excited at the prospect of those dark grey stairs.  Finding a convenient time for painting is a little tricky (I can’t even imagine how we’ll keep our very determined Fat Bunny at bay while it dries), but I can’t wait!

Thanks for reading along!  Have an excellent week!