We wrote a post a few weeks ago called ‘Nettlesome Design Trends,’ which was about trends we just can’t get on board with – word art, cow hides, and backwards books. The comments on that post are fantastic, and since then I’ve done a lot of thinking about how the images we see on blogs and in magazines both drive trends and destroy them – and how there’s a threshold between deep desire for an item (on the community level) and visual fatigue.

One item that I’m nearing the threshold for is the striped Moroccan blanket with pom poms.  They are gorgeous, and I would love one, but they’re also starting to be so ubiquitous that I find myself less enchanted than I was even a month ago.  Take a look: 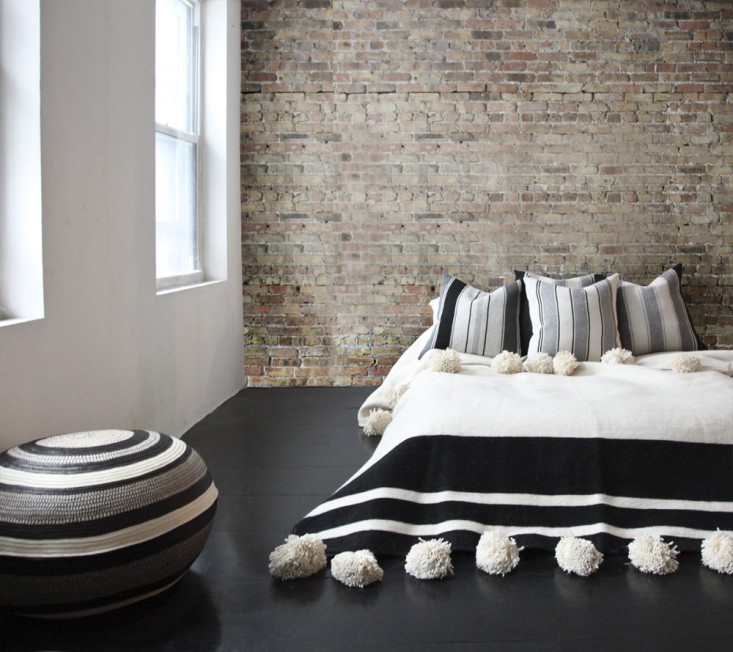 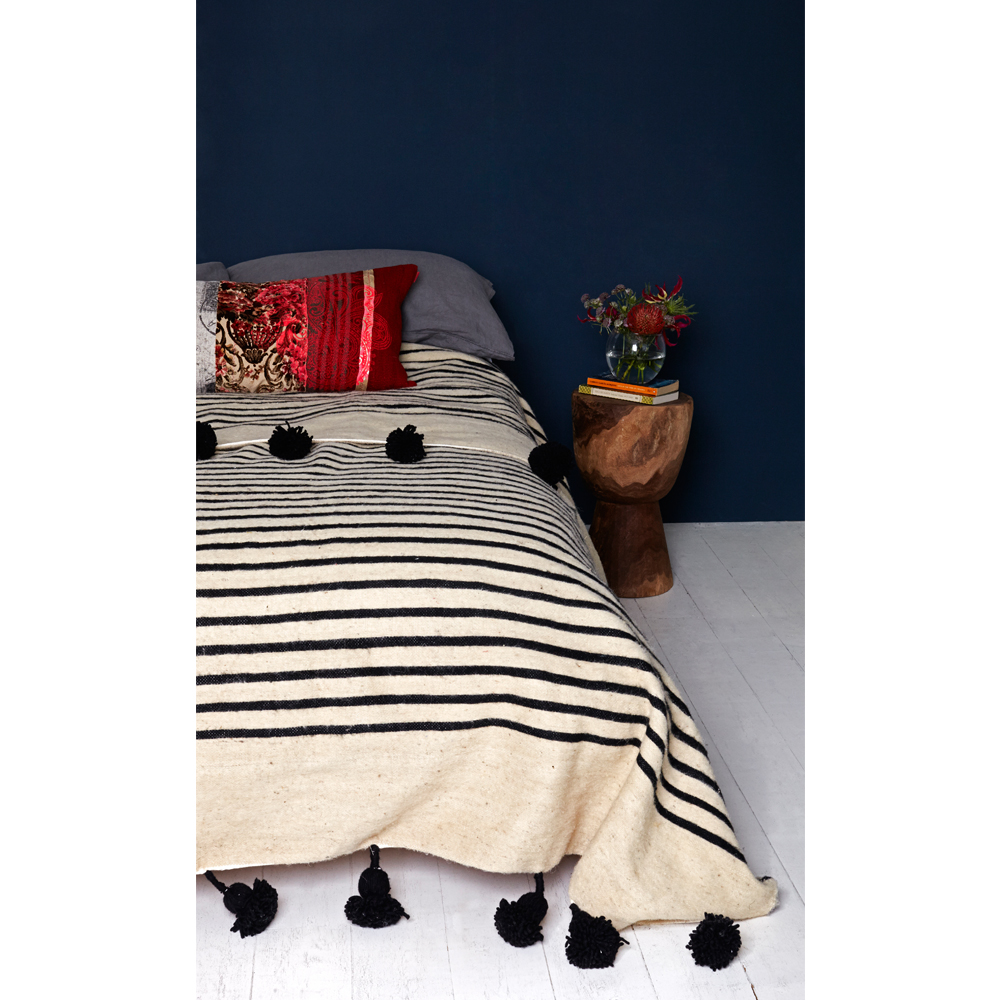 Beautiful, right?  But not only are they ubiquitous, they’re also expensive.  That first one rings in at a cool $485, and the second one isn’t much less.  There is absolutely no room on my priority list for a $485 blanket.  Do you know what is on my priority list? Finding a way to protect the pretty daybed in the Chamber of Secrets from our cat Dean’s barf.

Now let me take a moment to say that I am acutely aware that this is my second post in a row writing about something gross (I guess it means I’m getting real comfortable with you all – for better or worse), and I solemnly swear that in my next post there won’t be anything gross at all.  But this week?  No such luck.  Cat barf it is.

The Chamber of Secrets is my favorite room in our house,  and Dean loves it too; it’s impossible to keep him out.  Twice in the last week I’ve gone in there to find the revolting evidence of some upset to his ample tummy.  Now, the obvious solution might be to keep the door shut, but let me tell you that Dean is not only tenacious – he’s been known to hurl his considerable bulk against a door until it opens – he’s also adorable, and I like to have his furry company when I’m in there writing.  So I decided to do the only thing I could; I decided to make a cat barf prophylactic disguised as a trendy blanket.

This was a ‘use what you’ve got’ project, and so I cut a large dropcloth in half and washed the heck out of it to soften it.  Then I used blue tape to outline stripes and dabbed chalkboard paint onto it with both a foam brush and a bristled one – if I’d had a mini paint roller I think that would have worked better, but I didn’t.

Then, using a pom pom maker I’d bought at JoAnn’s in the wake of Mera’s pom pom-palooza post, I whipped up a dozen of the fuzzy little darlings with the help of my nieces. 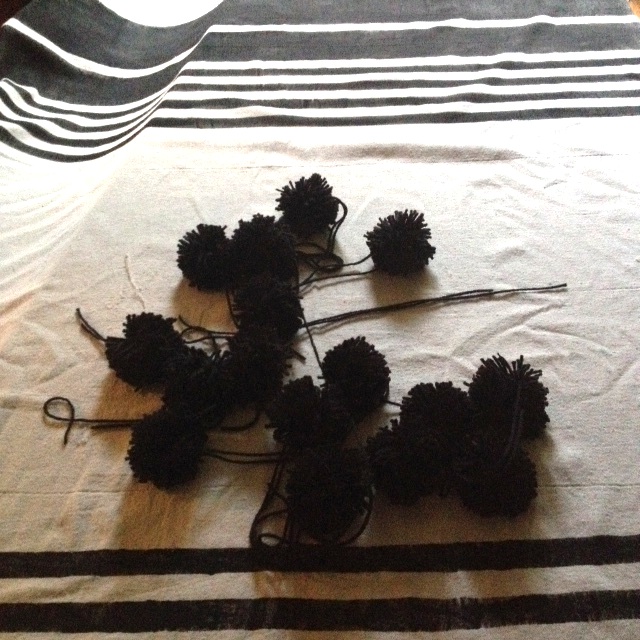 Once everything was dry and I’d sewed the pom poms on, I layered the blanket over the other textiles on the daybed.  And?  Not bad – if I cock my head to the side and close one eye it doesn’t look that different than the ones I’ve been pining for. 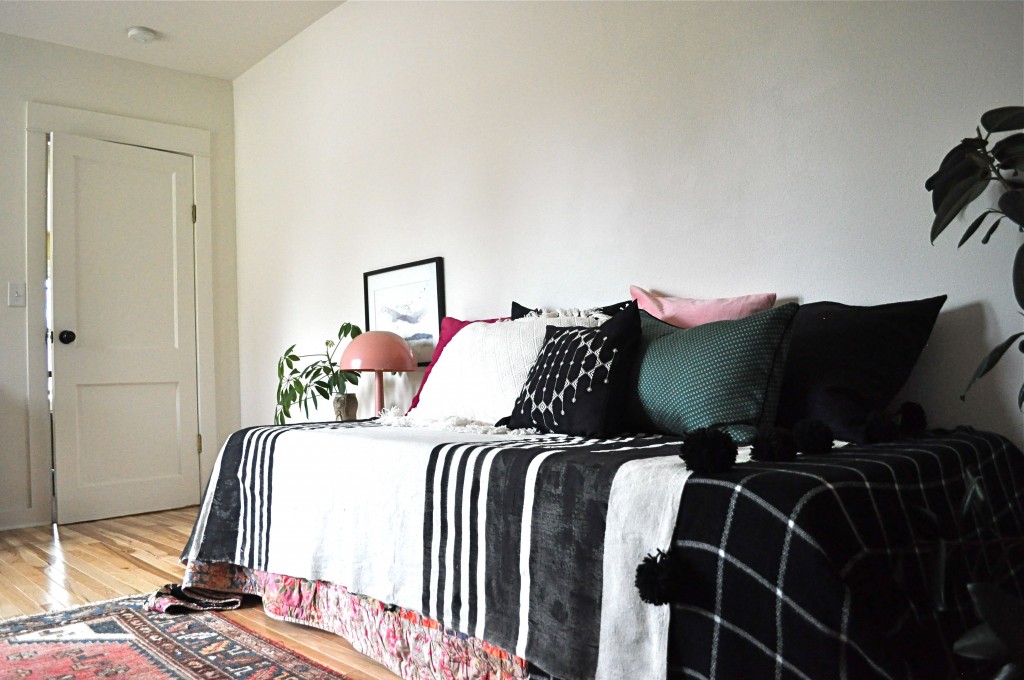 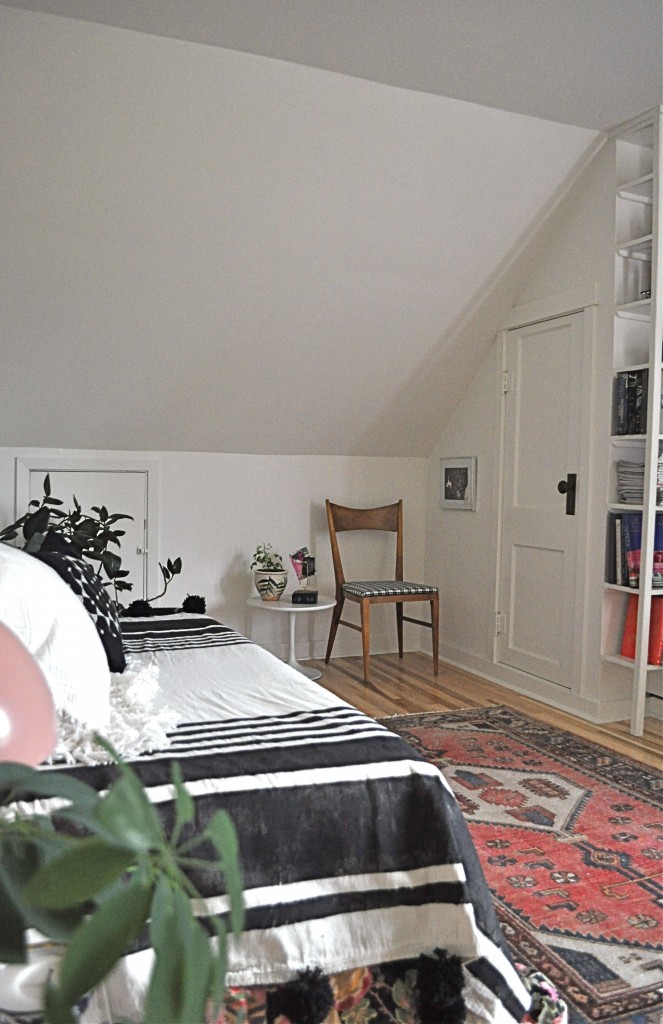 I love the pom poms! 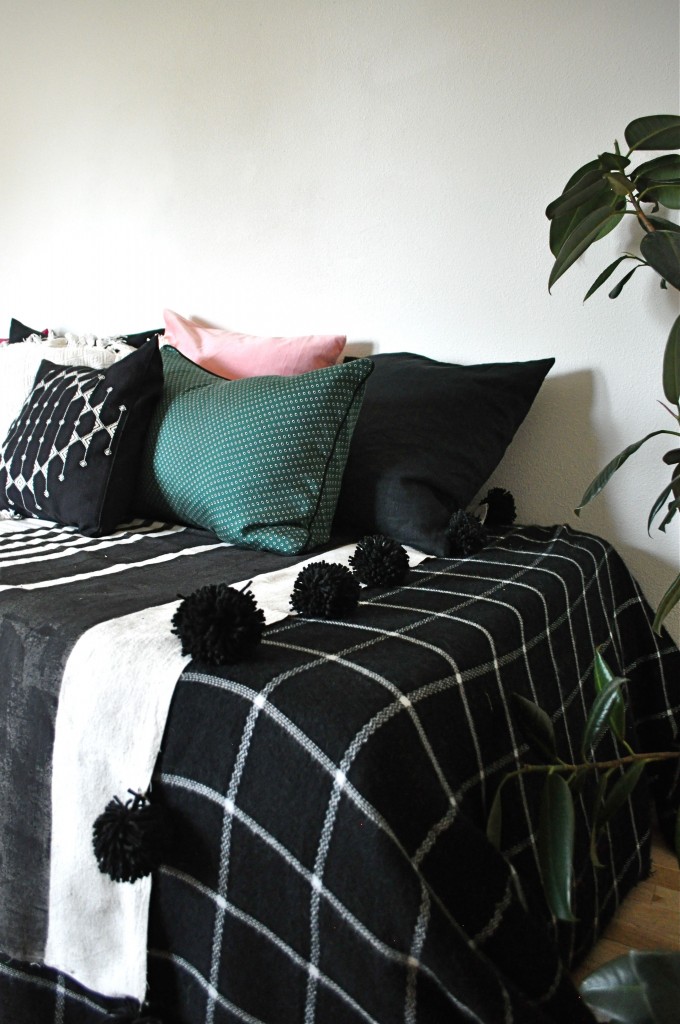 This feels like a good surrogate while I evaluate whether my love for these blankets is enduring, or just a fleeting fancy brought on by an onslaught of perfectly styled images.  I’m hoping that it will serve its primary function too, although Dean – unerring in his contrariness – seems to have found a new favorite spot. 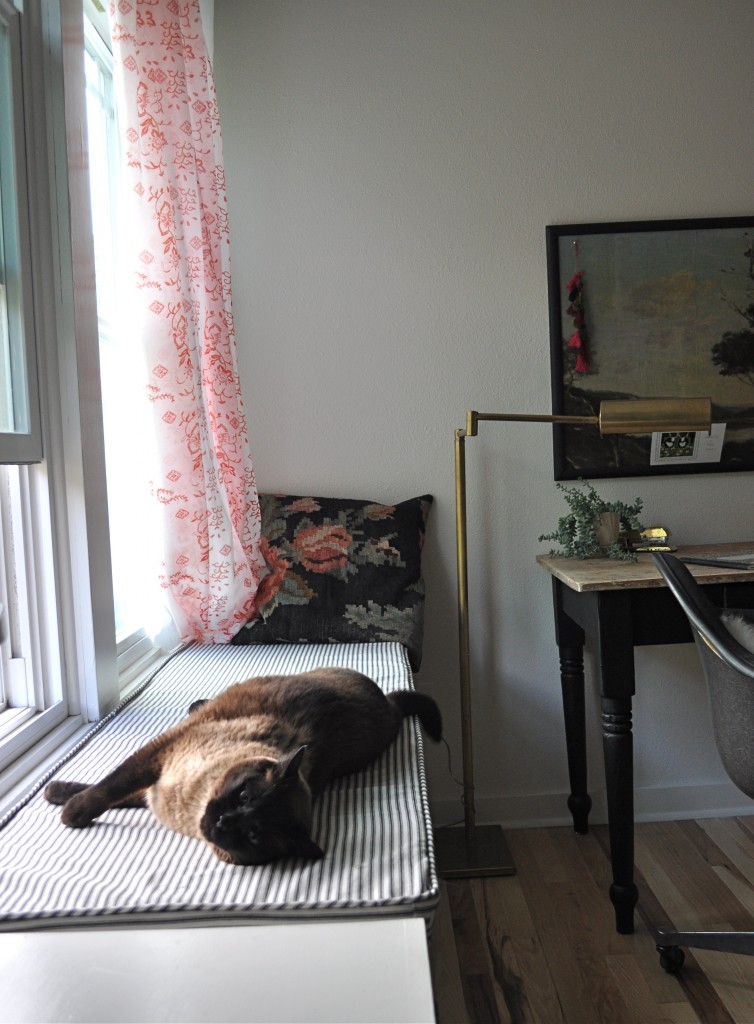 So what do you think – if he refuses to move his adorable, vomit-prone body over to the daybed, what trendy item should I hack to protect the window seat?

29 responses on “Necessity is the Mother of Trend Following”