*If you came here hoping for pretty pictures – run away!  Come back next week; today is not the day for you.  If you’re here because you woke up this morning hoping to see a photo of a mummified squirrel, keep reading.*

Part One: In Which I Spend All Weekend on a Roof Just so it can Look Exactly the Same as it did Before

I desperately want to show you something lovely today.  I’ve been working on a pretty, decorative DIY project that I had every intention of sharing, but instead the reality of home ownership reared its ugly, bulbous head and spewed forth a time-consuming and expensive task from its gaping, stinking maw.  Maybe I’m being melodramatic (maybe), but I think the very worst part of home ownership is maintenance – costly, onerous projects that result in no visible change.  Sure, the days spent sanding drywall in the Chamber of Secrets were tedious and uncomfortable, but at the end of it we had a beautiful room!  A tangible reward!

In contrast, we spent the last four days replacing part of our roof, and at the end?  We have a roof that looks exactly the same, a yard littered with debris, and myriad aches and pains resulting from crouching on an incline for hours on end. 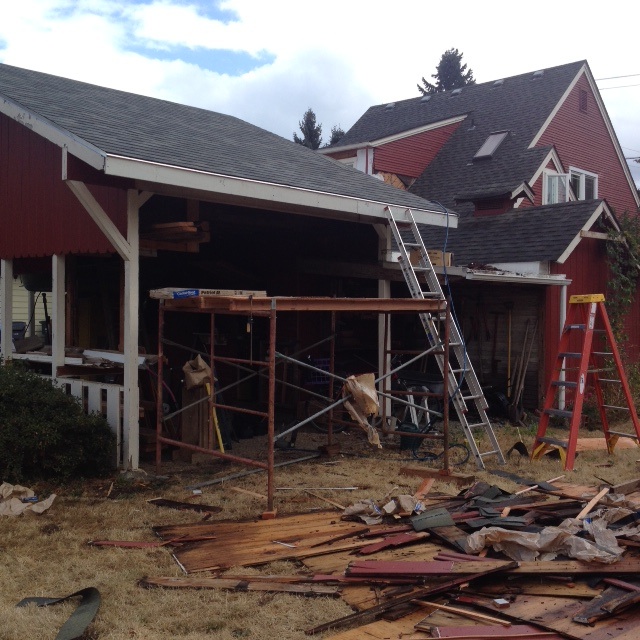 You might notice that the trash pile is wet – it rained for the very first time in months this weekend (of course it did).

In happy news, our five year-old niece had the time of her life using the magnetic pick-up stick to hunt for the many nails hidden in the summer-scorched grass.  She squealed gleefully every time she waved the stick across the ground and heard the thwack of a nail connecting with the magnet, and when it was time to go she begged to stay.  What joy to have an aunt and uncle whose house is a magical wonderland of hidden (tetanus-y) treasure!

As you know, treasure and mummies go hand in hand, and our house is no exception.  Boy were we excited to find the mummified remains of the lesser-known Pharoah, King Nut, entombed in the carport eaves: 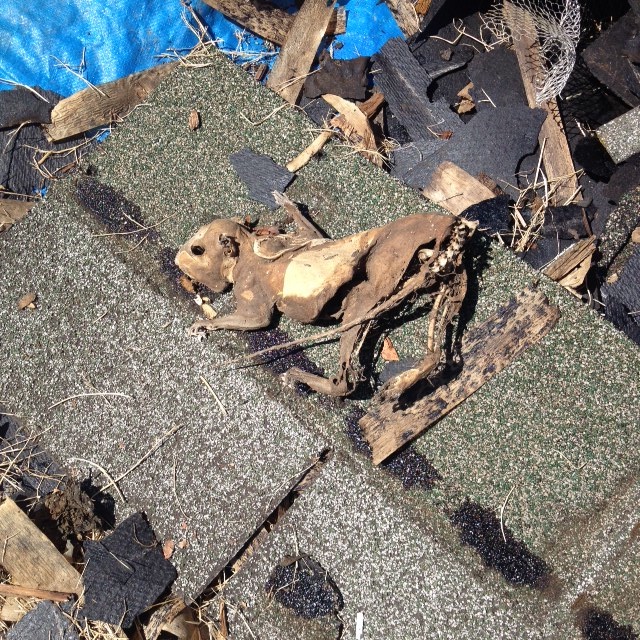 In all seriousness though, this project needed to be done and the reward will be that we no longer have the fear of a leaking roof (or a literal dead squirrel) hanging over our heads. 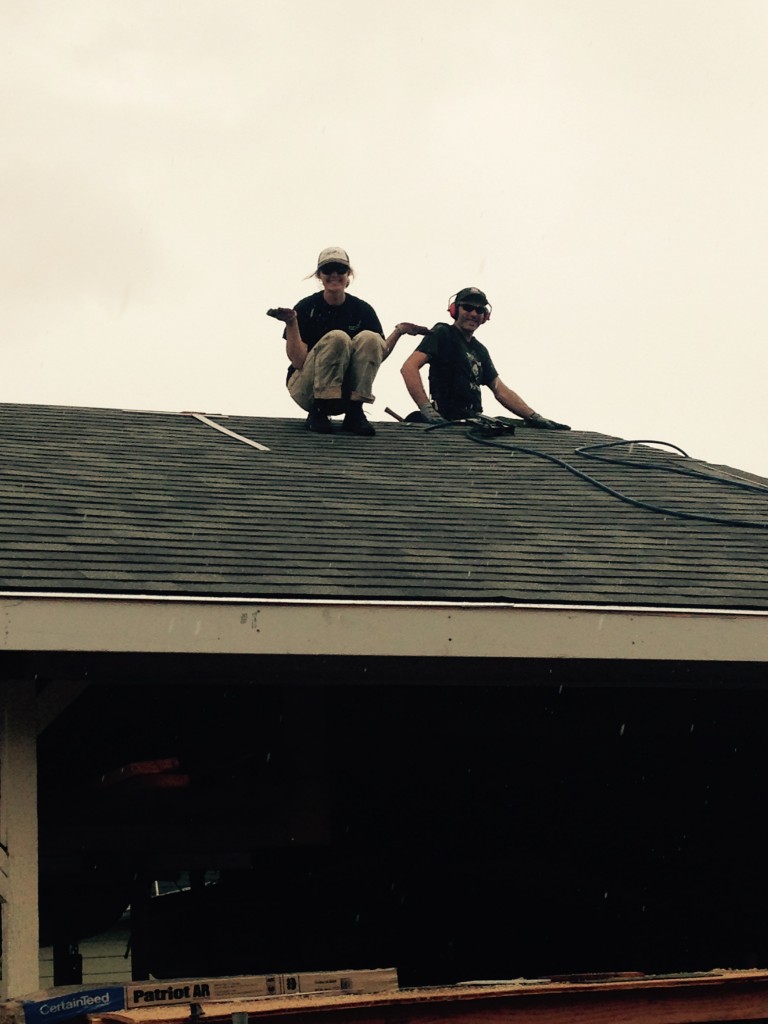 Part Two: In Which I Ruminate on Whether this Sow’s Ear of a Couch Could be a Silk Purse

I had some meditative moments up there on the roof – the hiss-kathunk of the staple gun a metronome for some very deep thoughts.  Very deep thoughts concerning sofas.  As many of you know, I’ve been obsessively hunting for a couch to use in the freshly-painted family room.  I’ve had a couple of near misses (a cute sofa so liberally doused in Febreze that I almost couldn’t detect the eau de ashtray underneath), and a couple of Craigslist heartbreaks (it is a cruel, cruel person who posts their $40 mid-century couch and then doesn’t respond to emails).

Maybe it was desperation that caused me to look twice at (and even snap a picture of) this thrift store sofa:

It might not be a coincidence that when I shared this photo of it on Instagram we lost four followers. 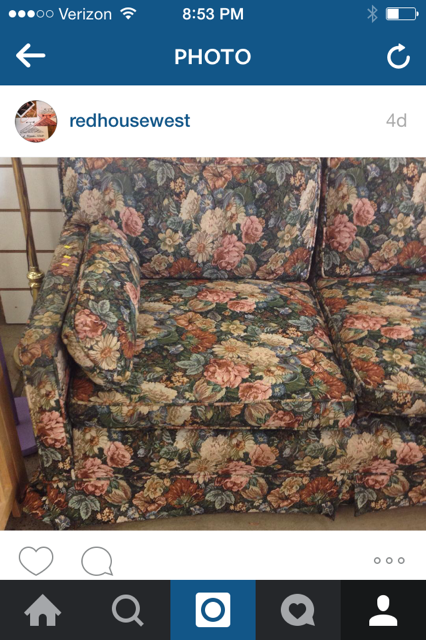 I asked for people to do some free association and comment with what came to mind when they saw the couch.  The responses cracked me up: 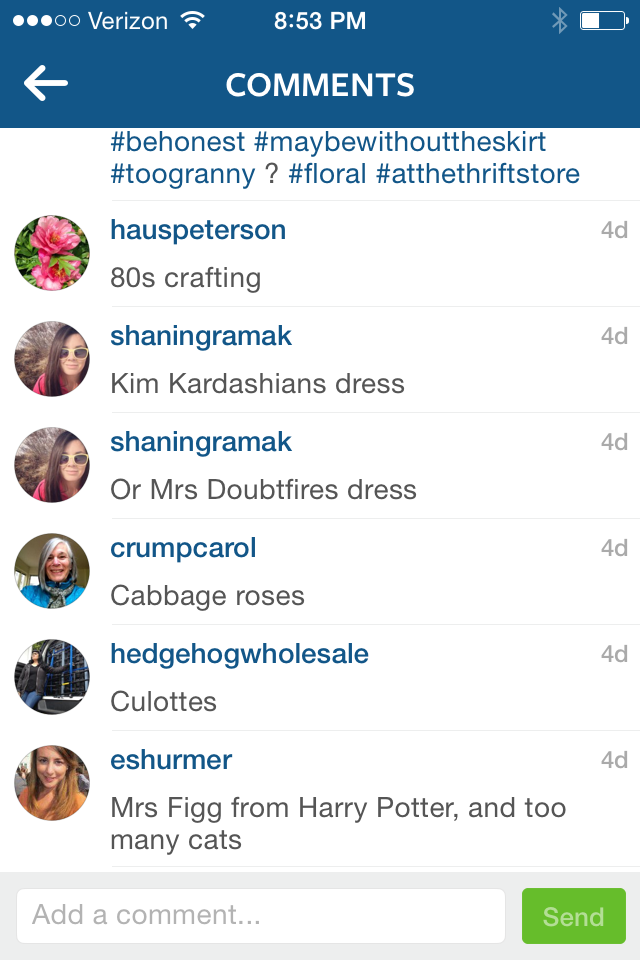 The fabric is reminiscent of 80’s crafting, and it would make a compelling pair of culottes, but I actually really like the shape of the couch – those square and slender arms, the loose back cushions, and the straight, low back.  While on the roof, wishing I were anywhere else (including lying on this couch covered in way too many cats), I tried to imagine how – if – I could make it work.

I’d start by removing the skirt, and maybe replacing the legs with some sleek ones like these from Pretty Pegs: 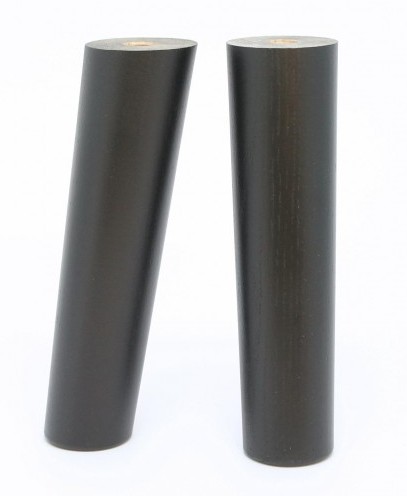 As Mera said (diplomatically, with great restraint), “it would definitely be the boss of the room,” so I’d keep the rest of the room neutral in color.  I’d bring in lots of black, and try to counteract the 80s/granny/feline/culottes nature of the couch fabric by keeping the other furniture and decor more modern and sleek.

My imaginings looked something like this, but with better Photoshop skills: 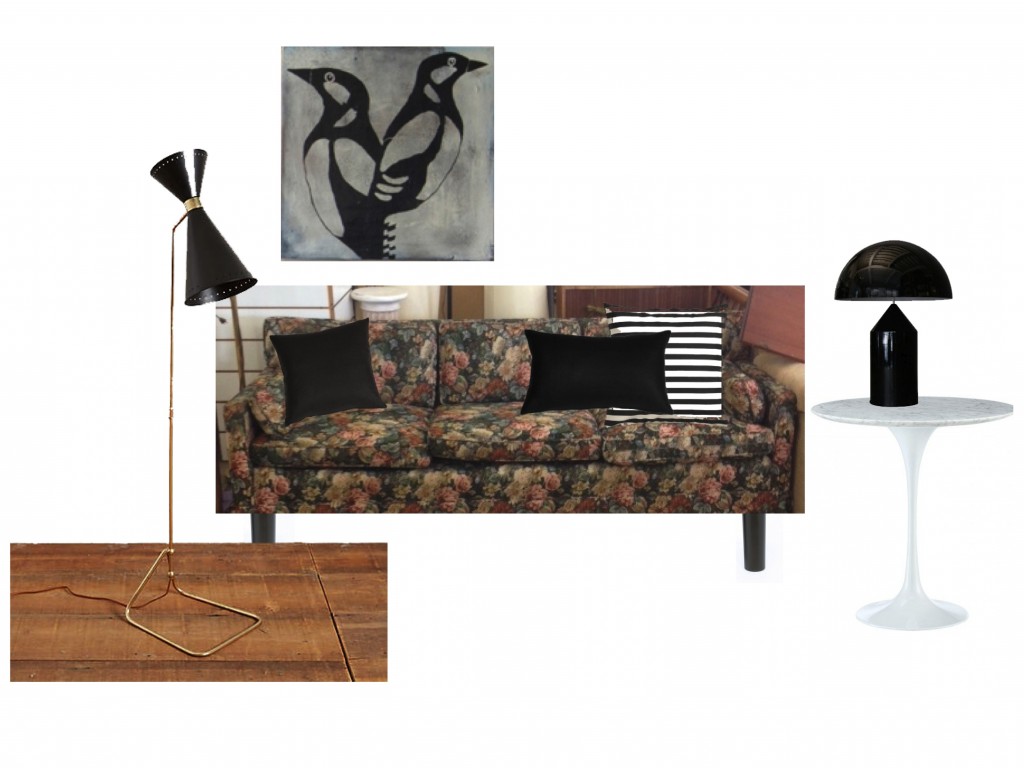 The intent here was cool and contrast-y, but I fear it just looks like a dog dressed up as a cat.  What do you think, did the roof altitude go to my brain?  I’m really curious – if you absolutely had no choice but to make this couch work, how would you do it?

We’re both adventuring with our families over Labor Day weekend and won’t be posting on Monday, but Mera will be back on Wednesday with a beautiful antidote to what I shared here today.

Finally, thanks so much for reading and commenting on the essay I wrote for the Design Sponge contest!  I didn’t win, but I’m really, really glad I did it. Have a great weekend!