Before we surge forward with our plans for 2016, Mera and I thought it would be fun to pause a moment to reflect on some of our favorite projects we completed last year.

I’m starting my look back at 2015 with something that didn’t really make it onto the blog. Though I shared our adventures in roofing (aka the most ungratifying before and after ever), that was just the tip of the iceberg. In the waning days of autumn, with clear skies overhead but rain on the horizon, we tackled the exterior of our house. And by tackled, I mean destroyed. 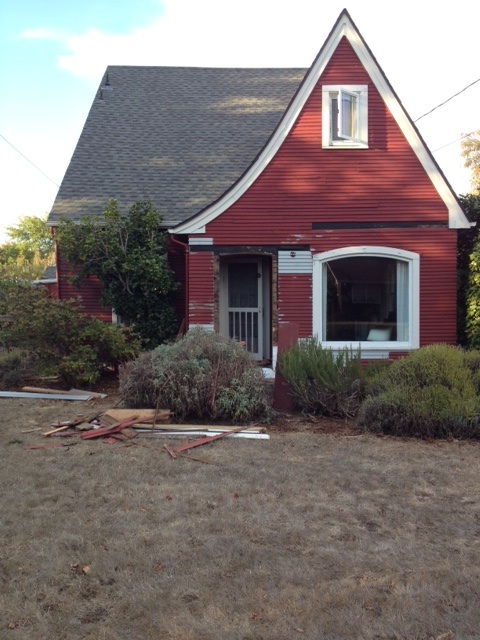 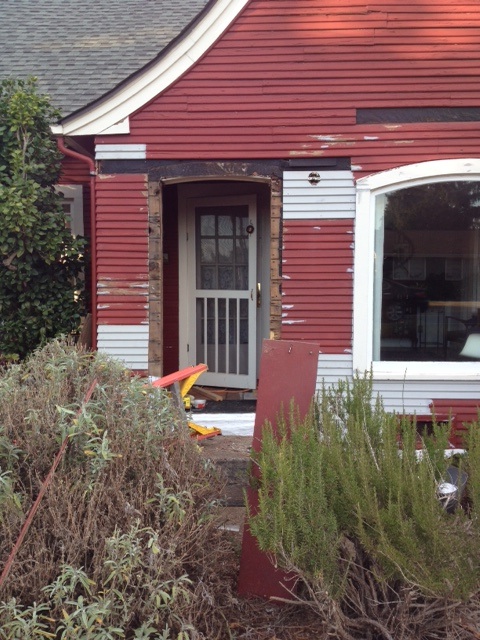 When I texted Mera the picture above, captioned with a silently screaming emoji, she said it looked like the aftermath of a hurricane. We were racing the weather, and for a couple weeks it was a frenzy of paint scraping, siding replacement, and endless caulking. We hired out the actual painting except for the trim, and finally our sweet red house was looking more like itself. 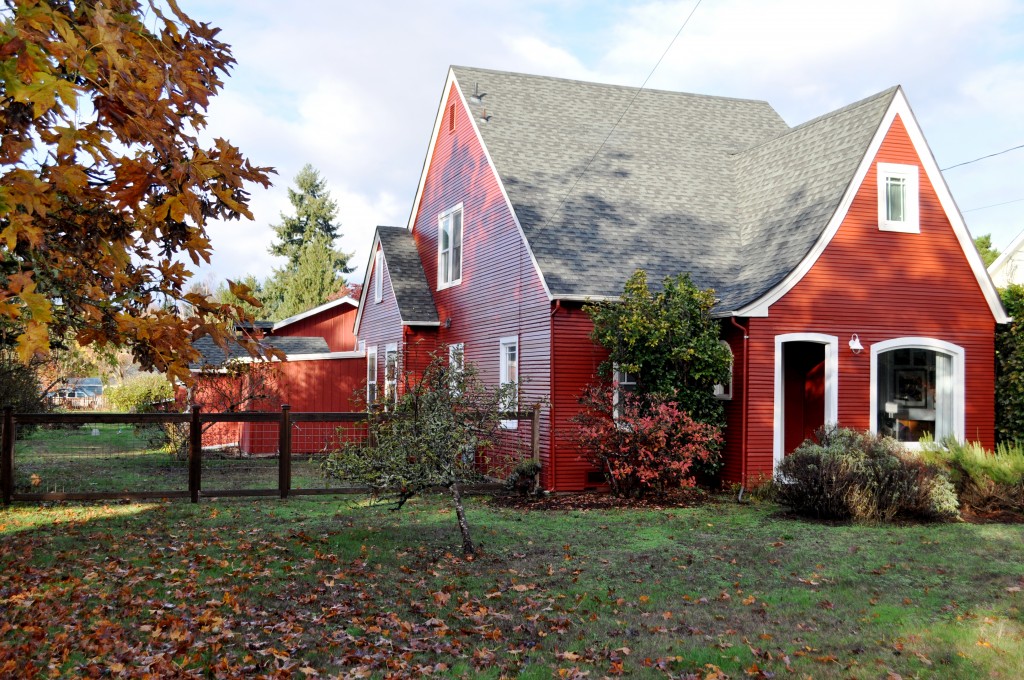 It was a pretty miserable couple of weeks, with lots of worry that the weather would change and we’d spend all winter living behind a sheath of Tyvek, but now when the rains lash against the house it’s nice to know everything is sealed up tight.

The other big project we completed in 2015 – one that was very well documented here at RHW – was the Chamber of Secrets. 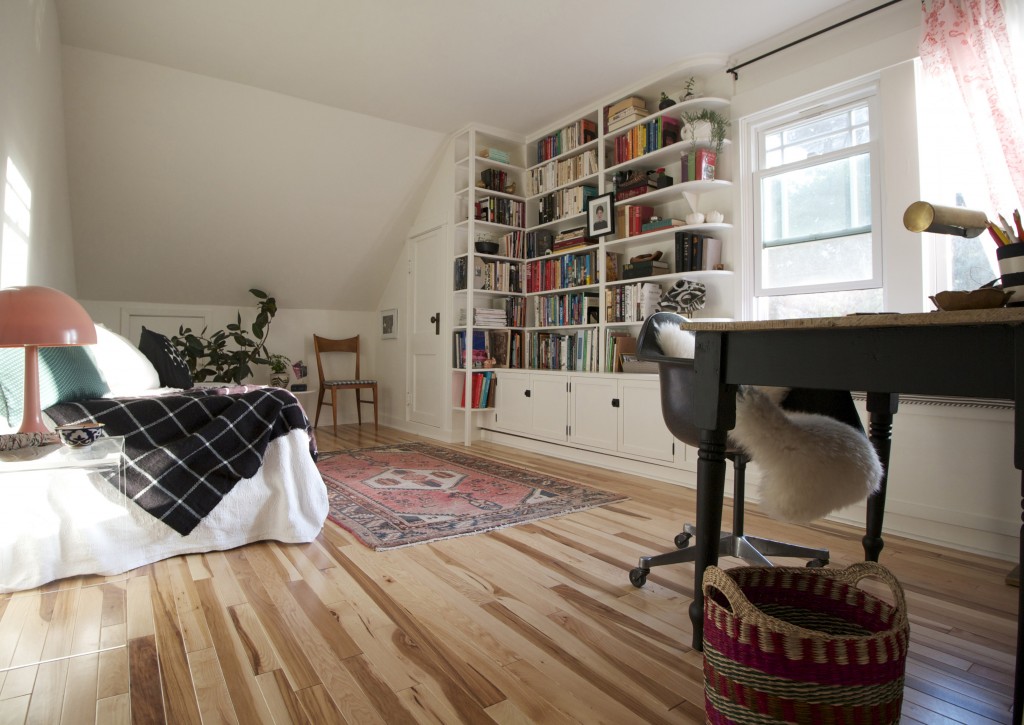 Months after finishing it, I continue to love this room and – most uncharacteristically – I’m hard-pressed to find a single thing I would change. The process of designing and building the shelves and closet with Cameron was really fun, and it was so gratifying to see sketches on paper transform into the real thing. Turns out that all the back-and-forth we did about the Chamber’s design elements (deciding on the curved shelves, the trim on the cabinetry, the placement of the closet) was very good practice for a pretty big project that we’re currently in the midst of. More on that in just a minute. 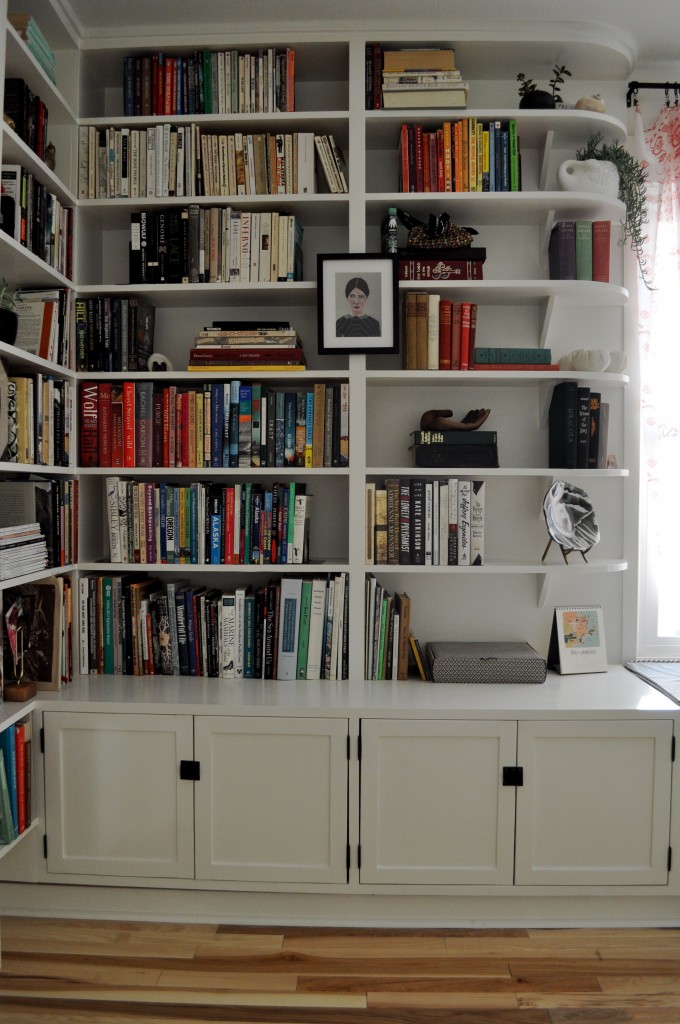 Not all of last year’s projects at Red House (south) West were big ones – I had a lot of fun making the oil painting bulletin board and the wood-tiled table, and refining my easy method for making fabric-covered mats (maybe 2016 will be the year that all the art makes it off the floor and onto the walls! Maybe!). 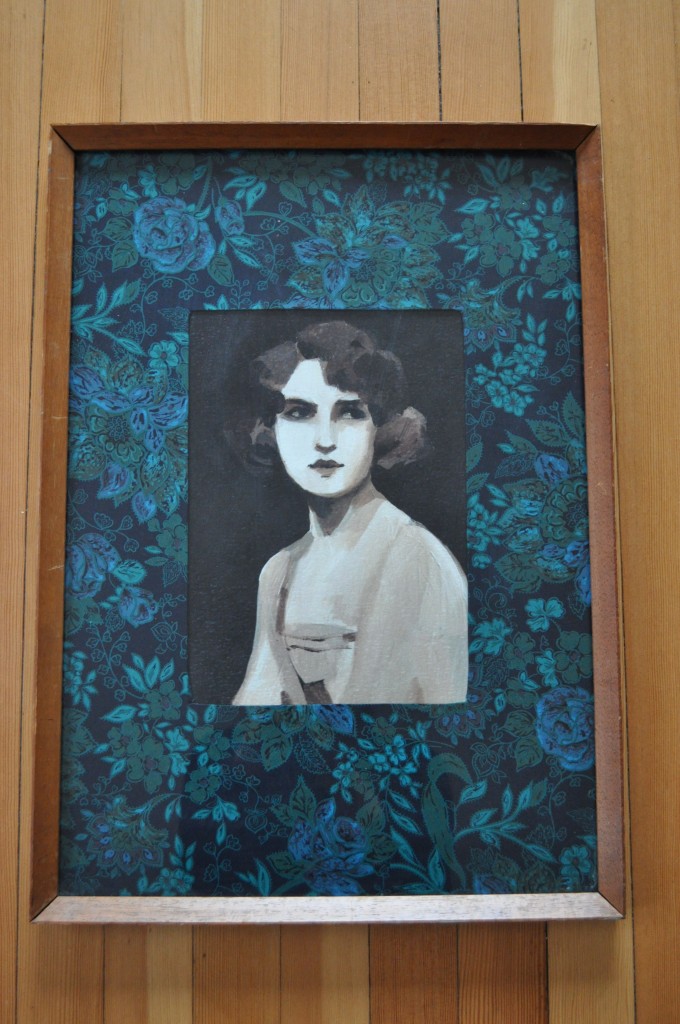 So last year was really good, but I’ve got a feeling that 2016 is going to be fantastic. Do you remember when I shared plans for the family room? I honestly thought (despite lots of evidence to the contrary) that it would be a quick project. I mean, I painted over those yellow walls and I was pretty sure I was home free: 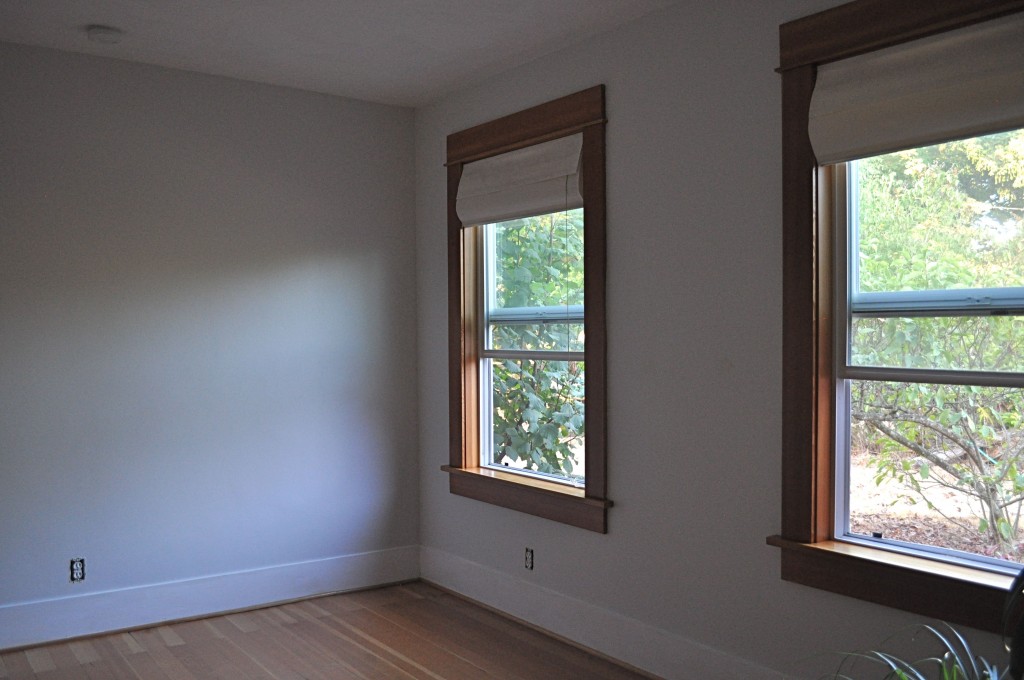 I had a plan, after all, and the only thing left was to put this green dream of a mood board into action: 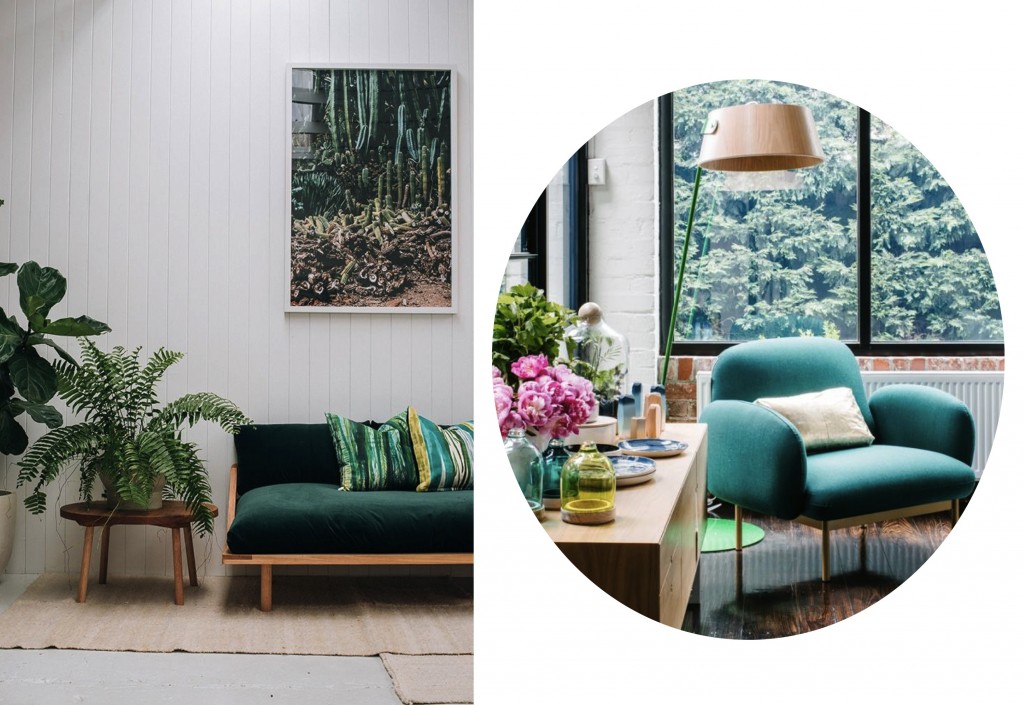 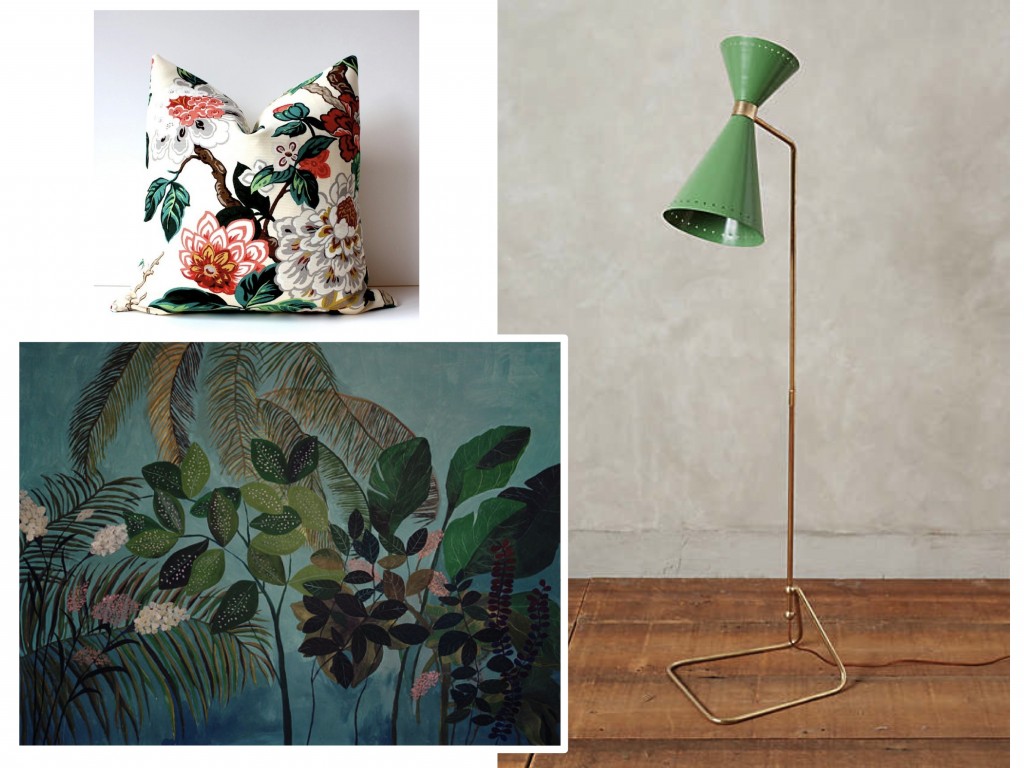 The sticking point of my plan, as you may remember, was the couch. I put in some serious (like seriously serious) time searching Craigslist and thrift stores, but couldn’t find anything in our budget that was even remotely (not even with lots of elbow grease and ingenuity) what I wanted. And so we decided to build one ourselves! And though it’s smaller in scale than the built-ins in the Chamber, it has taken just as many drawings, adjustments, and conversations. Here’s a sneak peek of it mid-process, before adding the back: 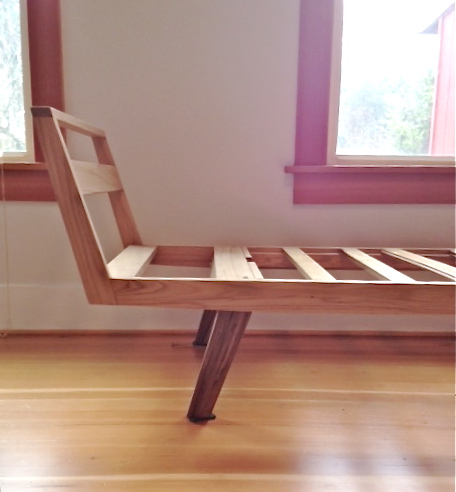 As we move into 2016 I’m so excited to share the finished couch – including an attempt at diy down-wrapped cushions – and finally, finally to share the whole family room (the plan for which has shifted, think more blue than green). I’m also really excited that soon we’ll be snuggling during Netflix marathons, rather than sitting in side-by-side chairs holding hands across the great divide.

Check in next Wednesday when Mera shares her own reflections on 2015 and plans for the new year.  We’re both heading into a particularly busy time at work, so for the next couple months we’ll be posting once a week – on Wednesdays – rather than twice. We’re planning to get back to our regular schedule when things calm down a bit, hopefully in March.

As always, thanks for being a part of Red House West – here’s to an amazing 2016!