As I mentioned in my post about fixing up the Paul McCobb chair last week, we are living in Washington state for most of the summer, not in our red house west. I’m having fun exploring a new town, but I’m missing the antics and affections of Fat Bunny and Tiny Tiger (though they’re in good hands), our house and – even more than I expected – our garden. 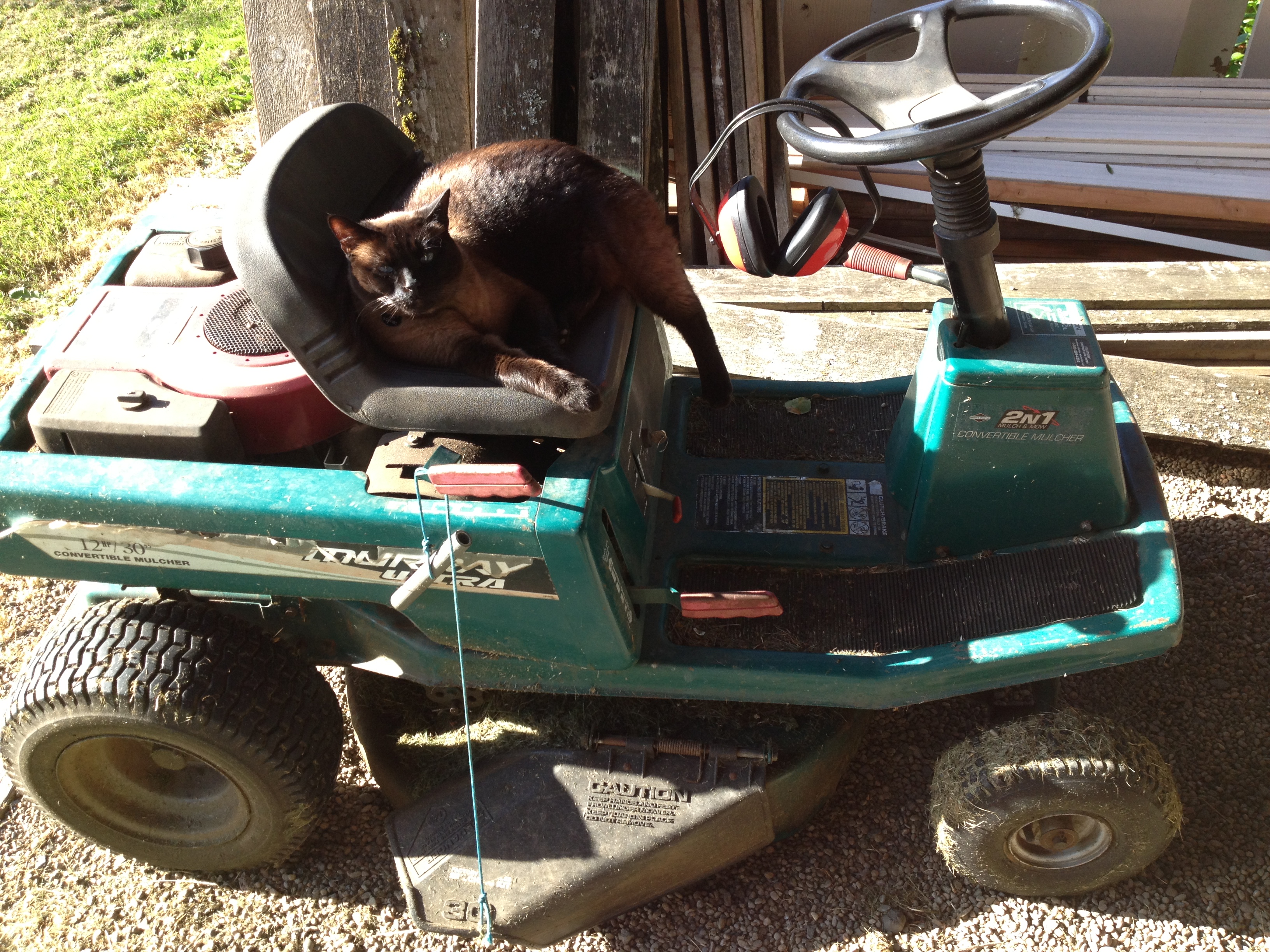 This is the second summer of owning our house (if you’re interested in more of our house-buying story, you can see that here), and last year we did some big experiments with gardening and trying to figure out how we use the outdoor space.  We had planned to apply the things we learned this summer – which obviously isn’t happening since we decided to live in Washington – but having some extra time to think and plan has turned out to be a good thing.

Our house has a big lot – almost 3/4 of an acre – and when we bought it the previous owners had divided it so that the house sat on a well-tended lot of about 1/3 of an acre which was separated by a fence from what was essentially a vacant lot in the back.

Here’s an aerial picture, courtesy of Google Earth, from just before we moved in:

The size of the lot was a big part of why we bought the house. It could be anything! We could have goats! A cattery! A mini-farm!  A skate ramp! Or in a financial pinch, we could subdivide and sell (very unappealing prospect, no exclamation point).

The fall that we moved in a friend of ours came over with his tractor and tilled up a huge garden area, which we planted with a cover crop (crimson clover) and then tilled under for planting in the spring. 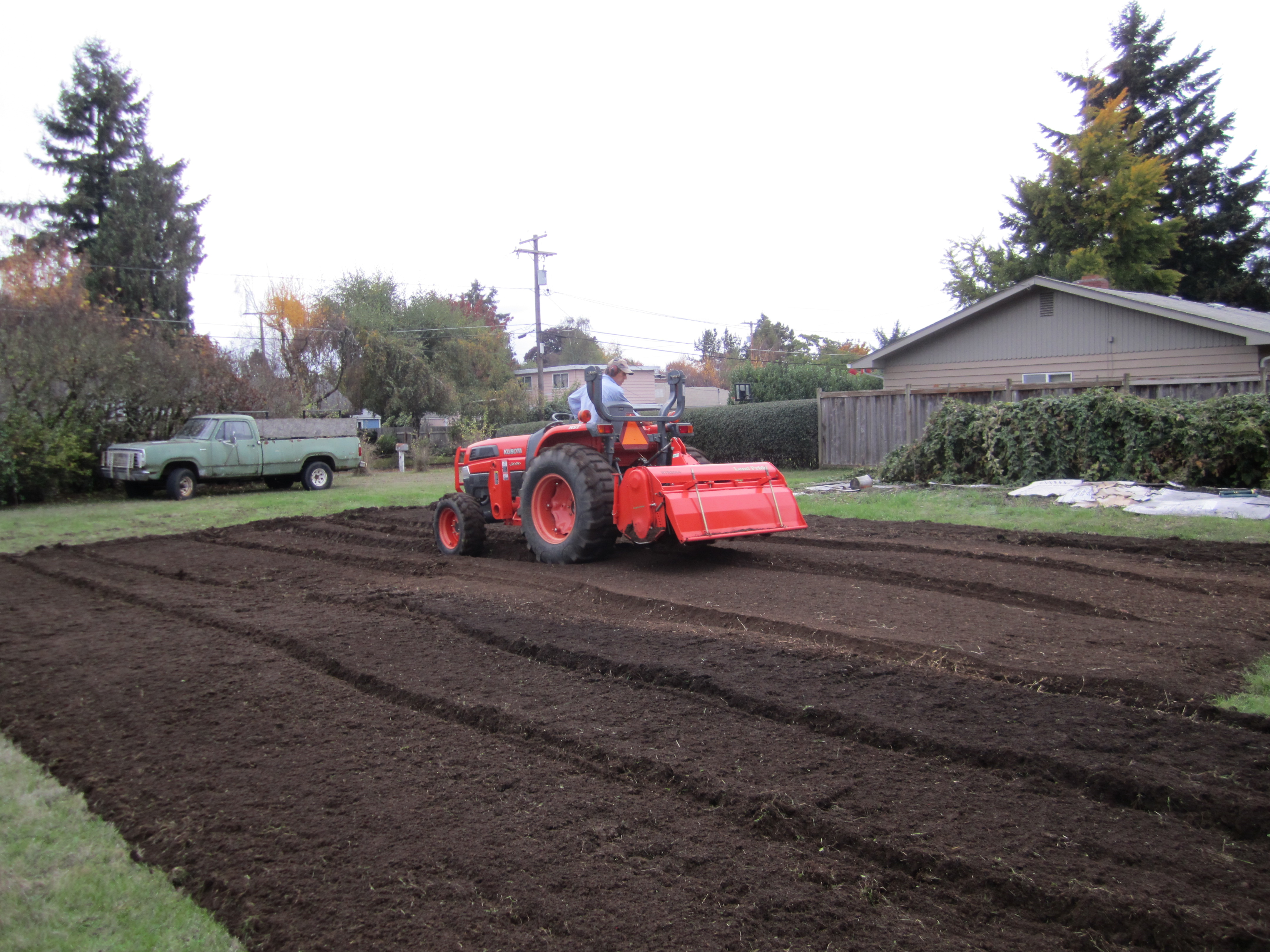 With dreams of fresh veggies and a full larder for the winter, we went big, planting cucumbers, corn, tomatoes, potatoes, asparagus, squash, beans and more. We’re fortunate to have an irrigation well on the property, which is currently housed in a dilapidated eyesore of a tin shed  (we’ve got plans for the shed, which I’ll share another time).  We grew a ton of food last year, but because  I never quite believe the magic of food growing from a tiny seed stuck in dirt I made this GIF of the garden from tilling through the first snow as proof for myself that it really does happen.

We learned a lot last summer. We learned that two full time jobs plus a gigantic garden = not much time to do anything else. We learned that we can halve the quantity of veggies we planted and still have plenty to eat, share and store,  and that we need to stagger the planting of our corn crop so it doesn’t all come on at once. We learned that the farm a couple miles up the road from us sells perfect pickling cucumbers for a lot less effort and not much more money than it took for us to grow them. 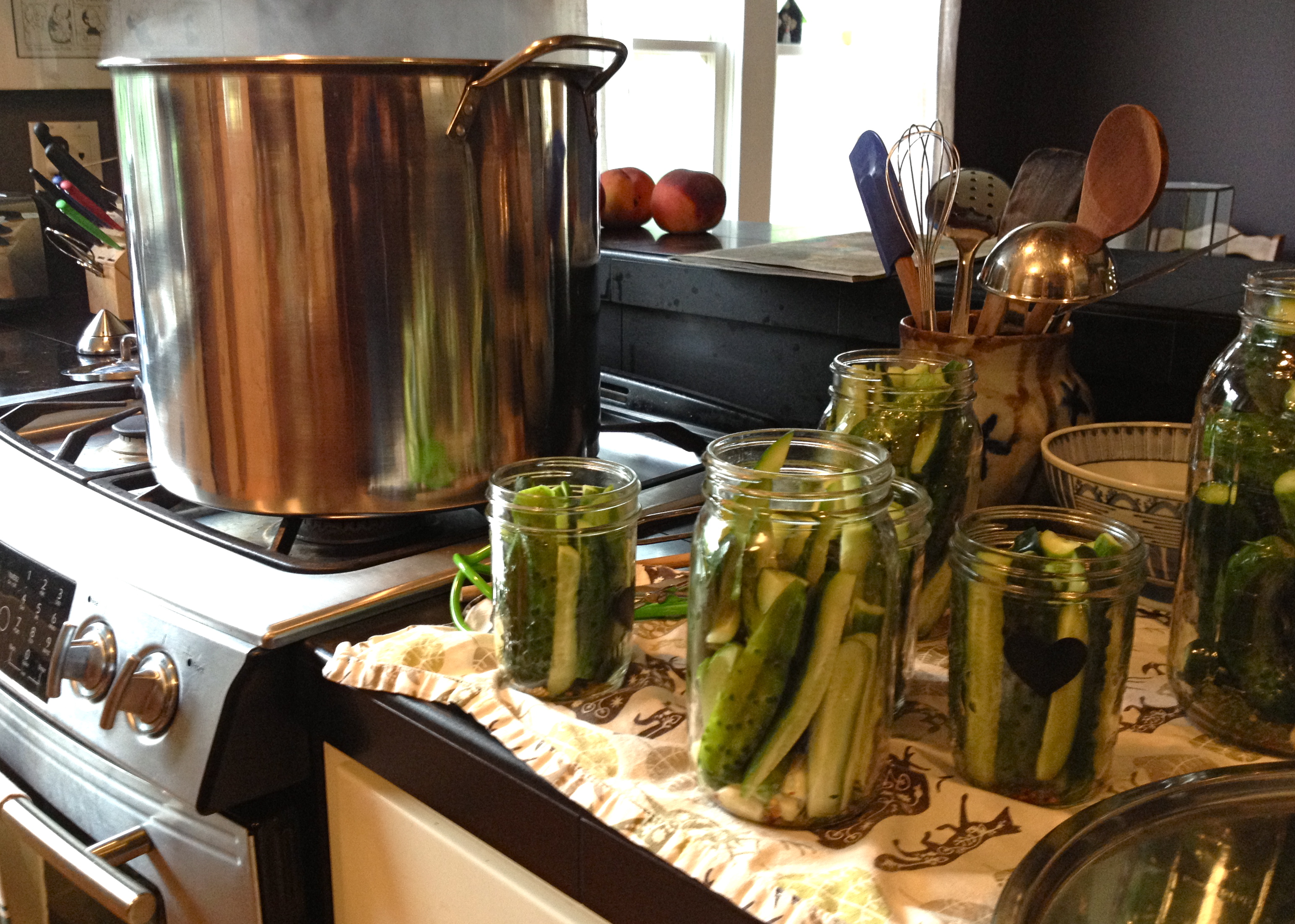 We loved growing, harvesting and preserving fruit and so last fall and this spring we expanded our orchard to include three figs, two cherries, two Asian pears, a Bartlett pear,two apples, and a big ol’ hedge of raspberries in addition to the bountiful old plum trees, marionberries, and blueberries we already had. 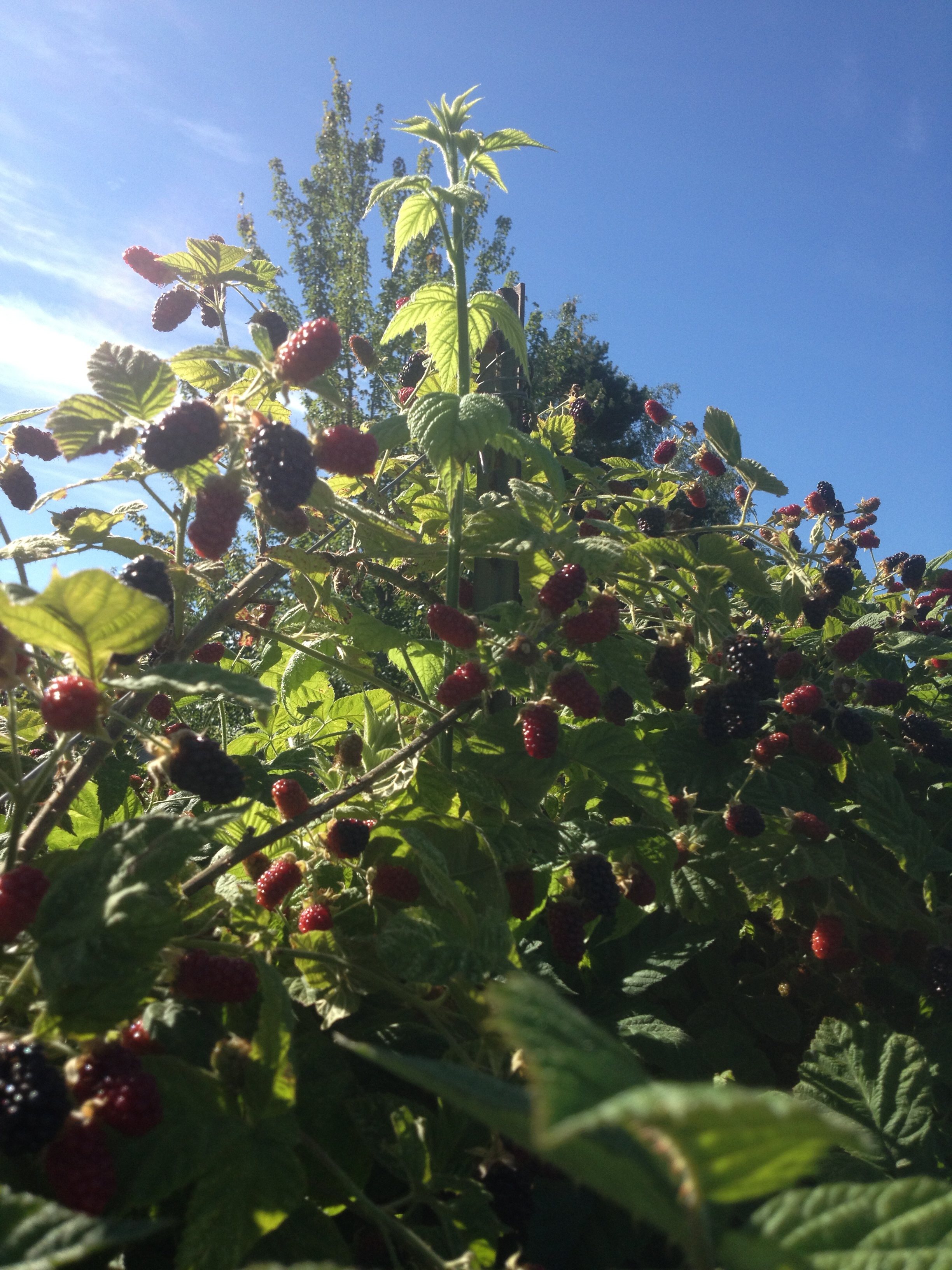 When we first decided to come to Washington, we worried about what to do with the garden to keep the weeds at bay while we were gone.  We discussed planting a cover crop or covering the whole thing with tarps (the horror), but were excited when we connected with a man who was looking for a large area to grow onions and tomatoes for a neighborhood food share.  The perfect solution!  A space we couldn’t use is now used for and by our local community, and when we return we’ll get a share of onions and tomatoes!  I love how this worked out.  Nick, the farmer, did some serious labor and our backyard is now a beautiful and very orderly onion farm (tomatoes hadn’t yet been planted when we left). 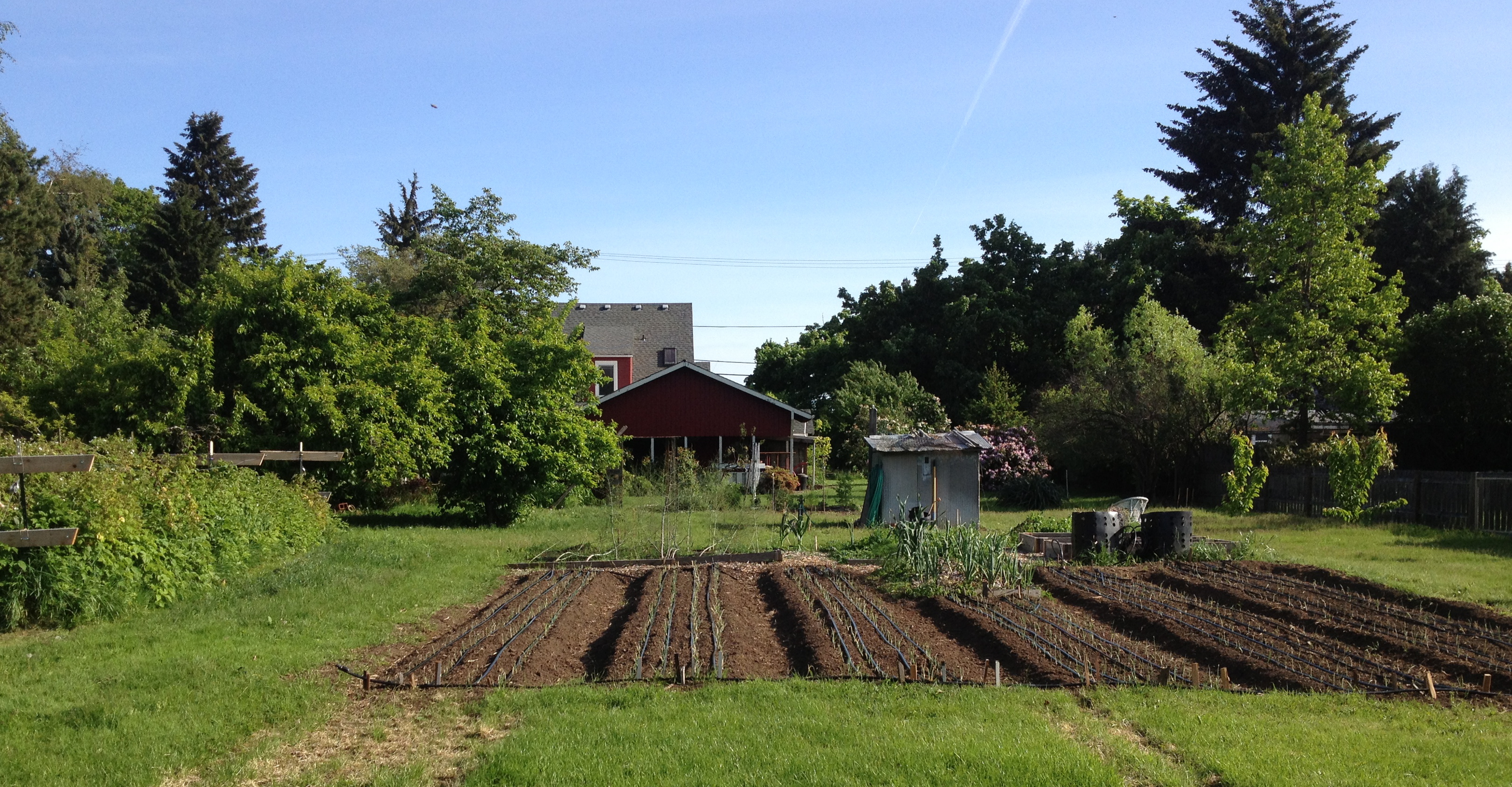 So that’s the food part of our garden!  Now let’s take a walk around the yard to a couple of my other favorite spots, and then I’d love to share some plans we have to make it even better. 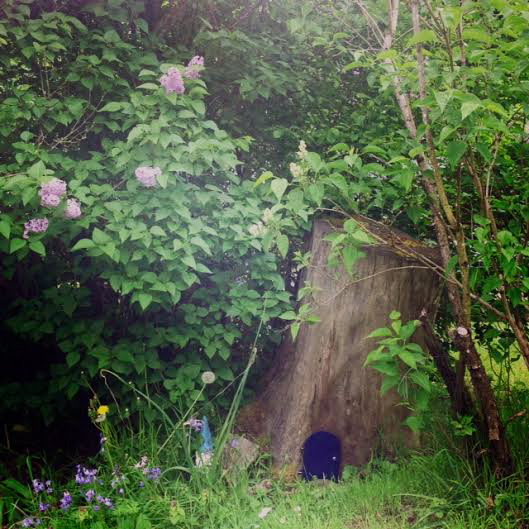 Gnome hide & seek is a popular sport ’round these parts.  Kids that come over search for the gnomes and then relocate them to other spots in the yard, to be found at a later date by other visiting kids (or us). 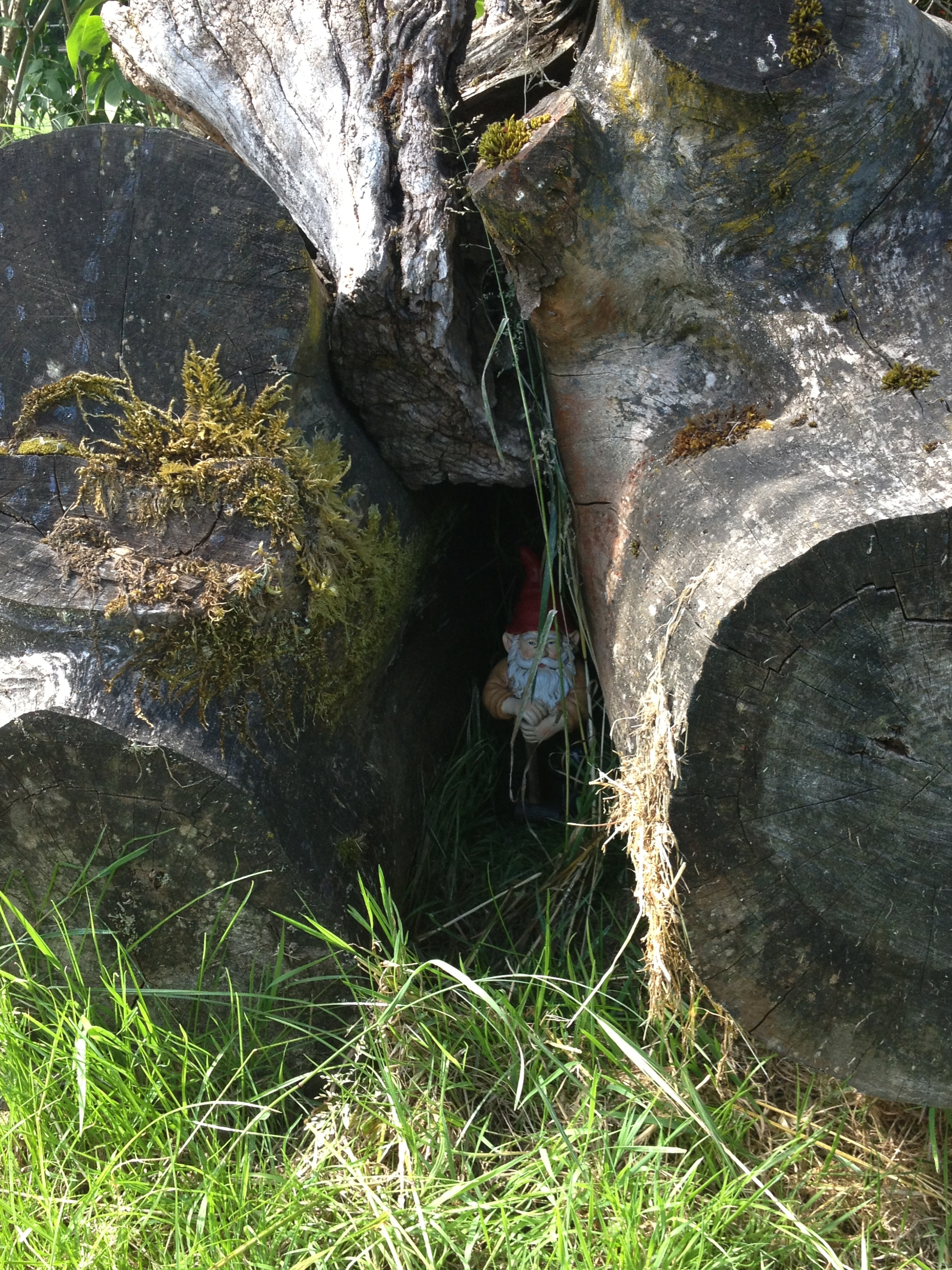 This past winter, a friend who is an arborist and also a beekeeper called us because he’d taken down a tree that had a honeybee hive in it and wondered whether we’d like it on the back part of our property.  Sight unseen we said yes, and this behemoth – that we love – was delivered via backhoe (and later threatened with engulfment by the lilac hedge). 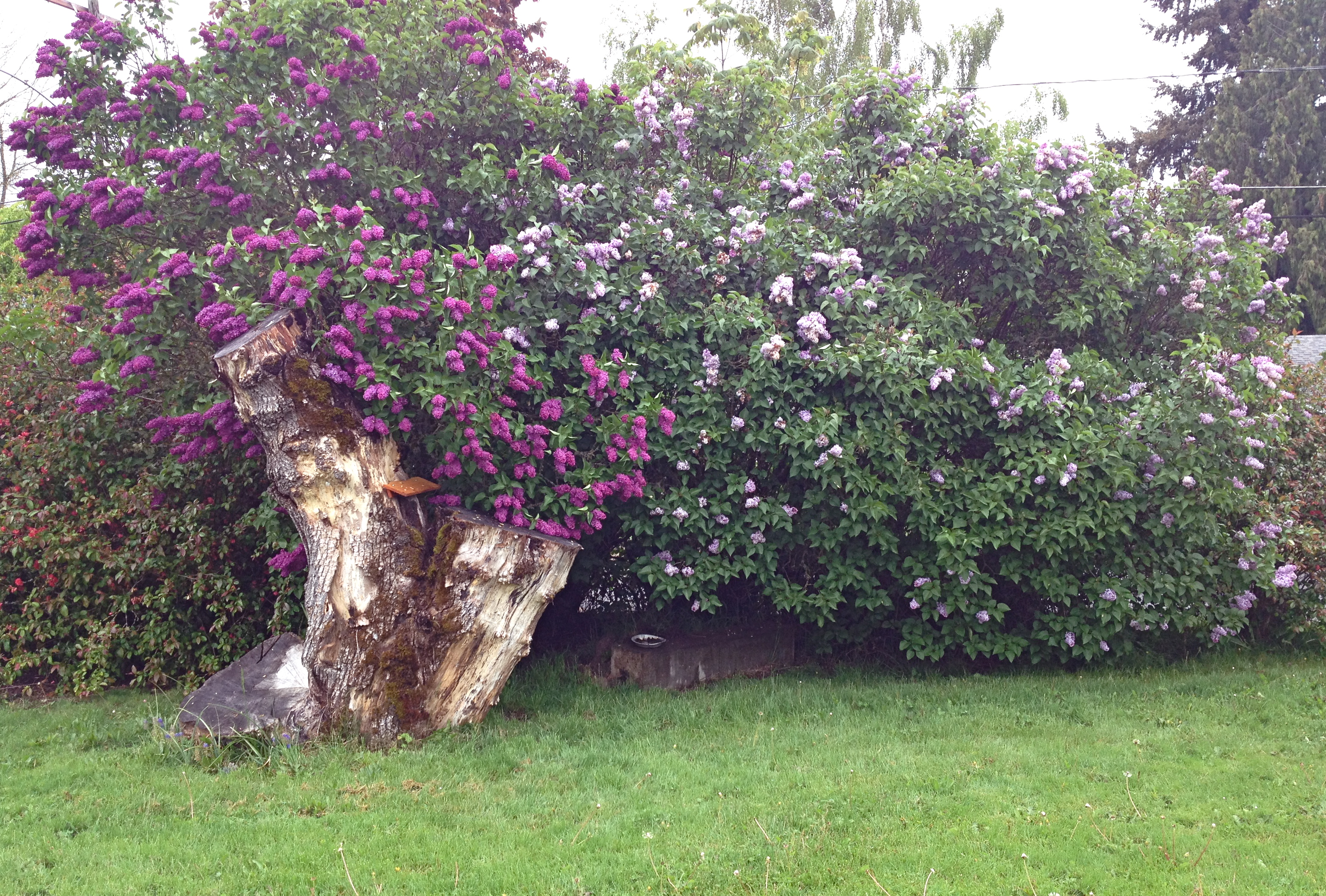 I love standing in the bees’ flight path and watching them careen back into the hive with their pantaloons of yellow pollen.  If you press your face to the tree, it smells of honey and hums with industry. 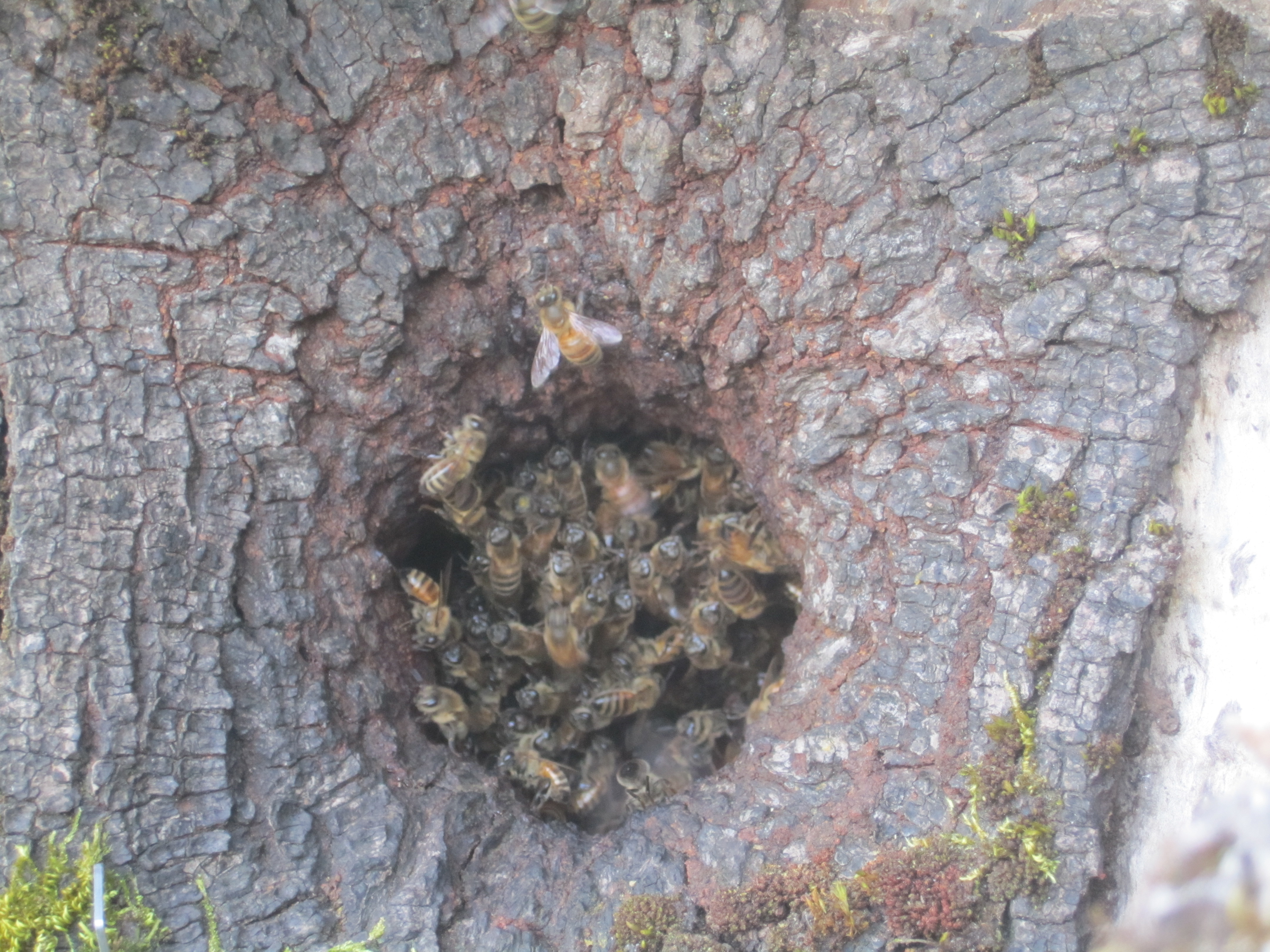 Our garden is a magical place.  It is filled with blooms and food and fairyland creatures.  What it does not have is a place to sit and eat and relax.  I’ve been dreaming of a pergola, with an arbor of either grapes or kiwi, that provides a nice shady spot for a table and – ideally – a hammock.  What I’m imagining looks a lot like this: 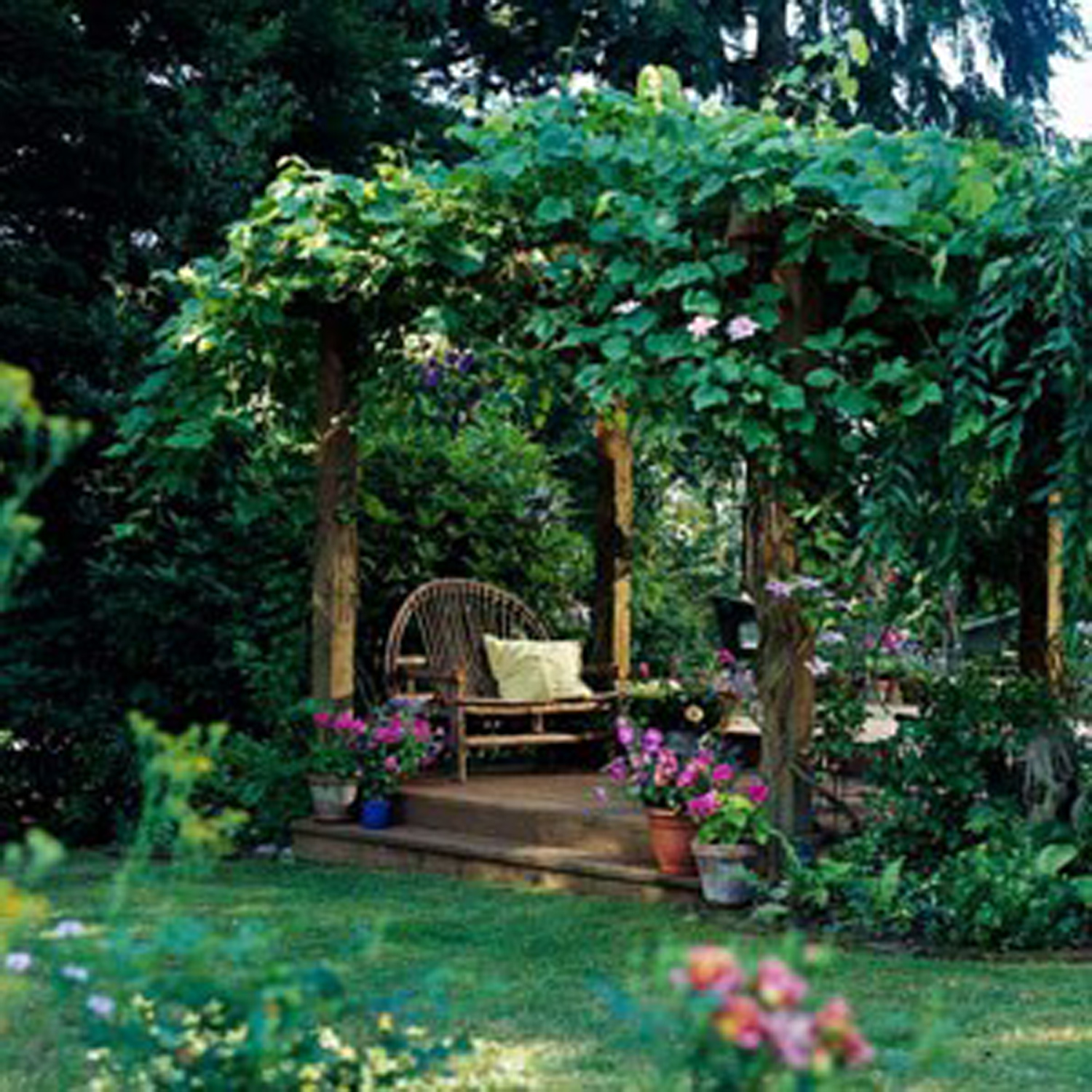 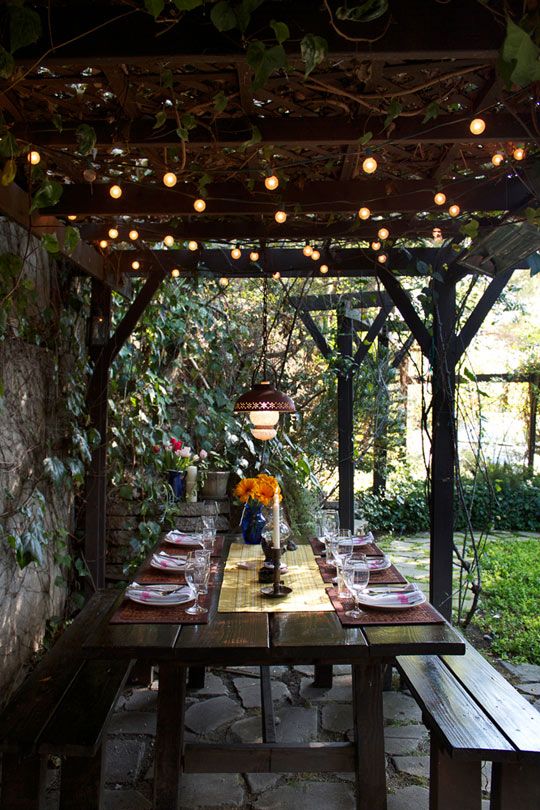 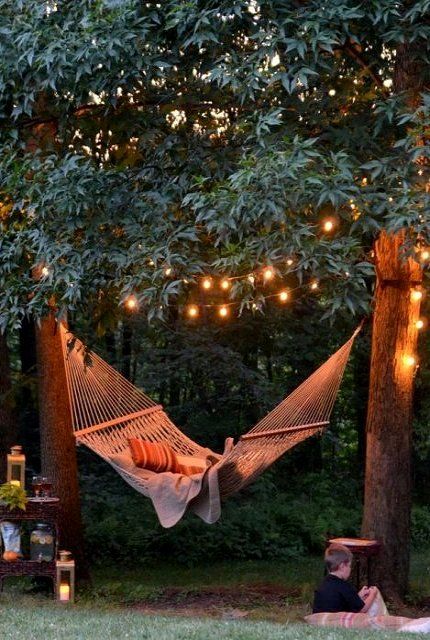 Of course, I’m not at all opposed to something like this, provided someone is there to feed me as I recline: 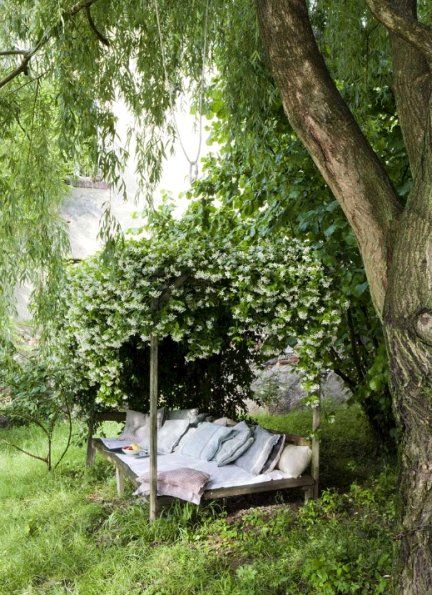 Cameron and I might try to tackle the pergola this fall when we move back home, or it might get pushed back until spring while we finish off some projects inside the house.  Either way, I’ll keep you updated here!  What outdoor projects do you have cooking?  We’d love to hear about them in the comments!

4 responses on “Katie’s House: A Walk in the Garden and Pergola Plans”