Two weeks ago I found myself inspired by Mera’s cheerful bathroom update, and I set out to do a little bathroom makeover of my own. The first thing I did was buy a gallon of paint. The second thing I did was fall in desperate, blind love with a shower curtain (I had no idea it was possible either) that I couldn’t afford. 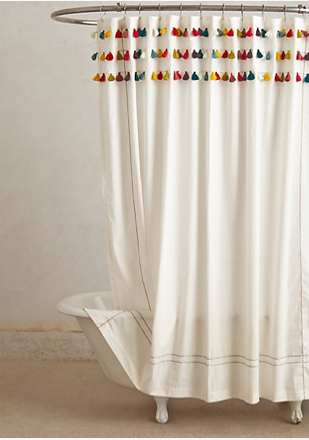 Look how pretty it is! Those colors! Those tassels! I wanted it so badly I called both Mera and my mom from the Anthropologie store (they have really comfortable chairs and the salespeople loved me sitting there talking on my phone) asking them to talk me out of buying it. That I chose to call them is telling – I actually wanted them to convince me to buy it of course; to say that if I loved it, it was worth it. If I had truly not wanted to buy it I would have called Cameron, the frugal pragmatist, who would have asked whether – with a price tag of more than a hundred dollars – the tassels had a utilitarian function, like reducing shower steam or deploying as little tub scrubbers. 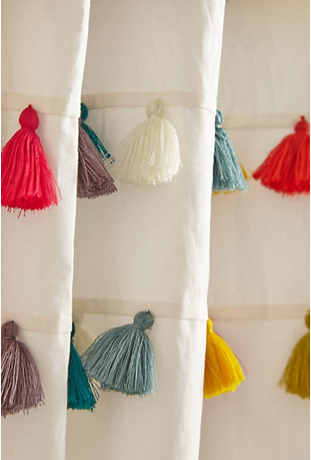 Ultimately my own frugal pragmatism prevailed, and I came home determined to make a tassel-bedecked shower curtain I could afford. I took advantage of a family trip (and my nimble-fingered family) to get everyone on board with making tassels. Once I worked out some of the production kinks, tassel tying became addictive. It’s the perfect mindless busywork, similar to knitting or crocheting but requiring less skill. Best of all you can do it while watching crappy television and at the end you have a pile of shiny little darlings to show for the hours you spent, instead of just self-loathing. 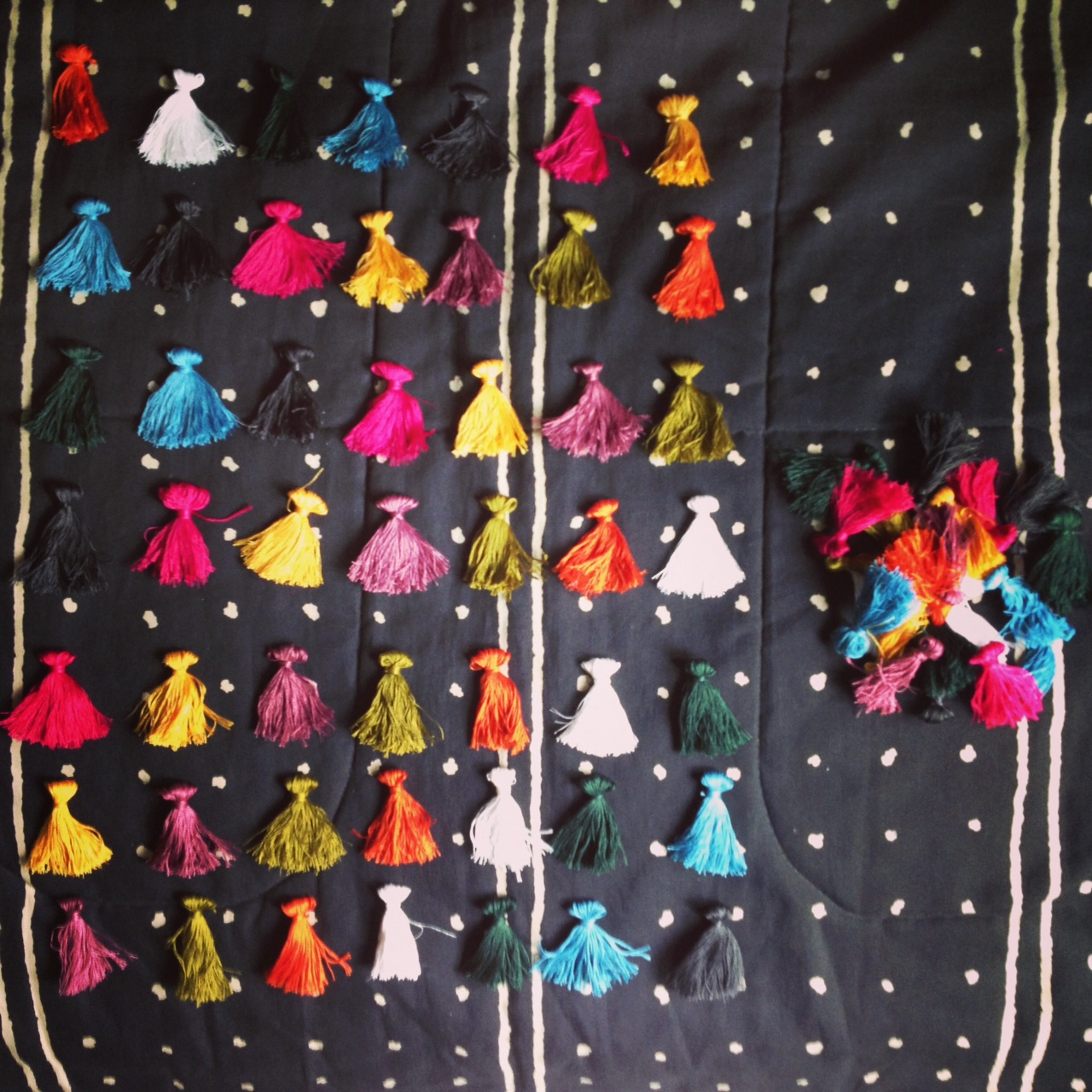 I am unstoppable. I’m considering an art installation in which I cover my entire house in tassels, just so I can keep tying them.

I’ve put together a tutorial for tying a two-tone tassel like the ones I made for the tulip chair pillow last week. Remember those?

Tools of the tassel tying trade

An embroidery needle (with a big eye) 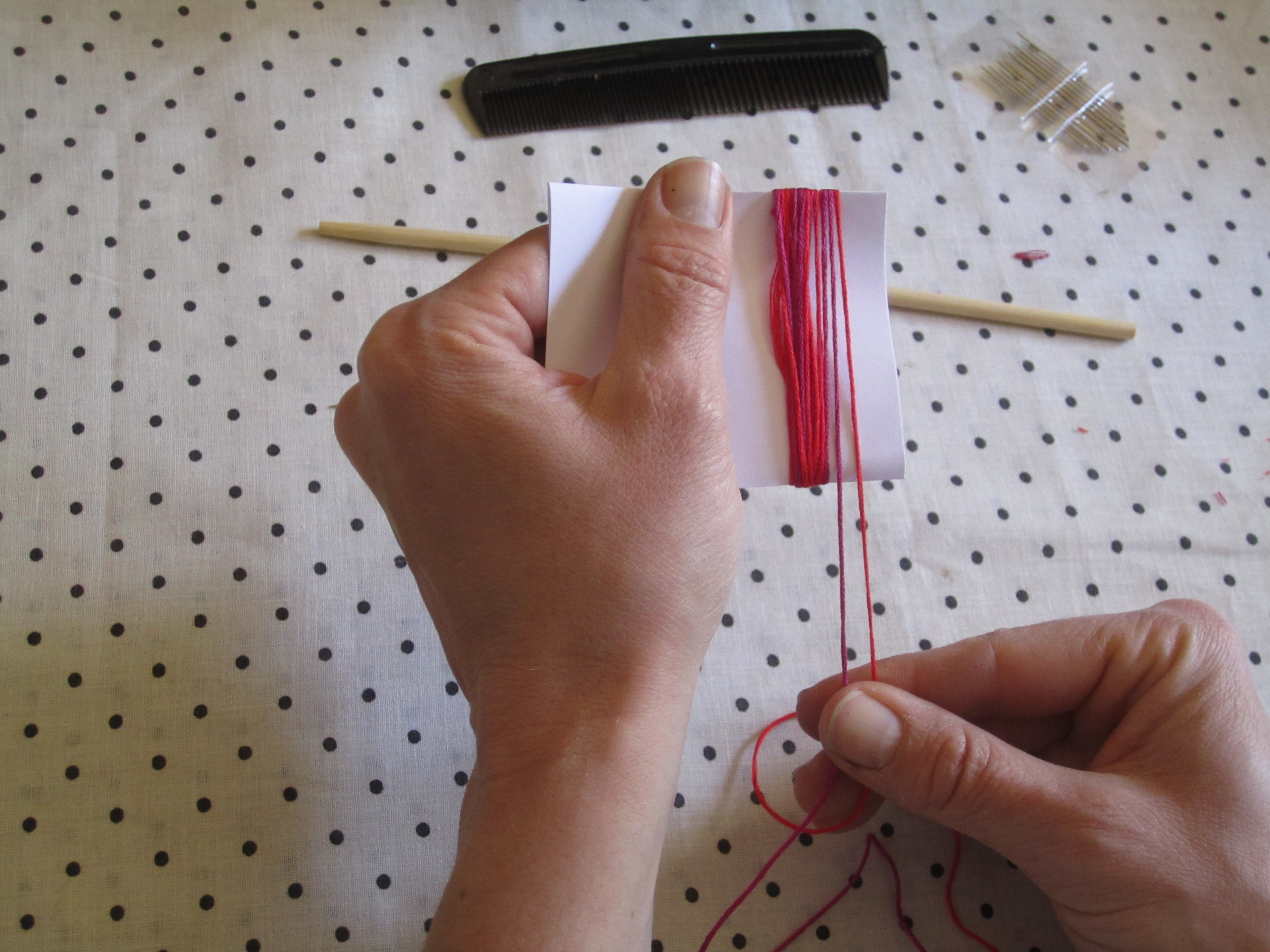 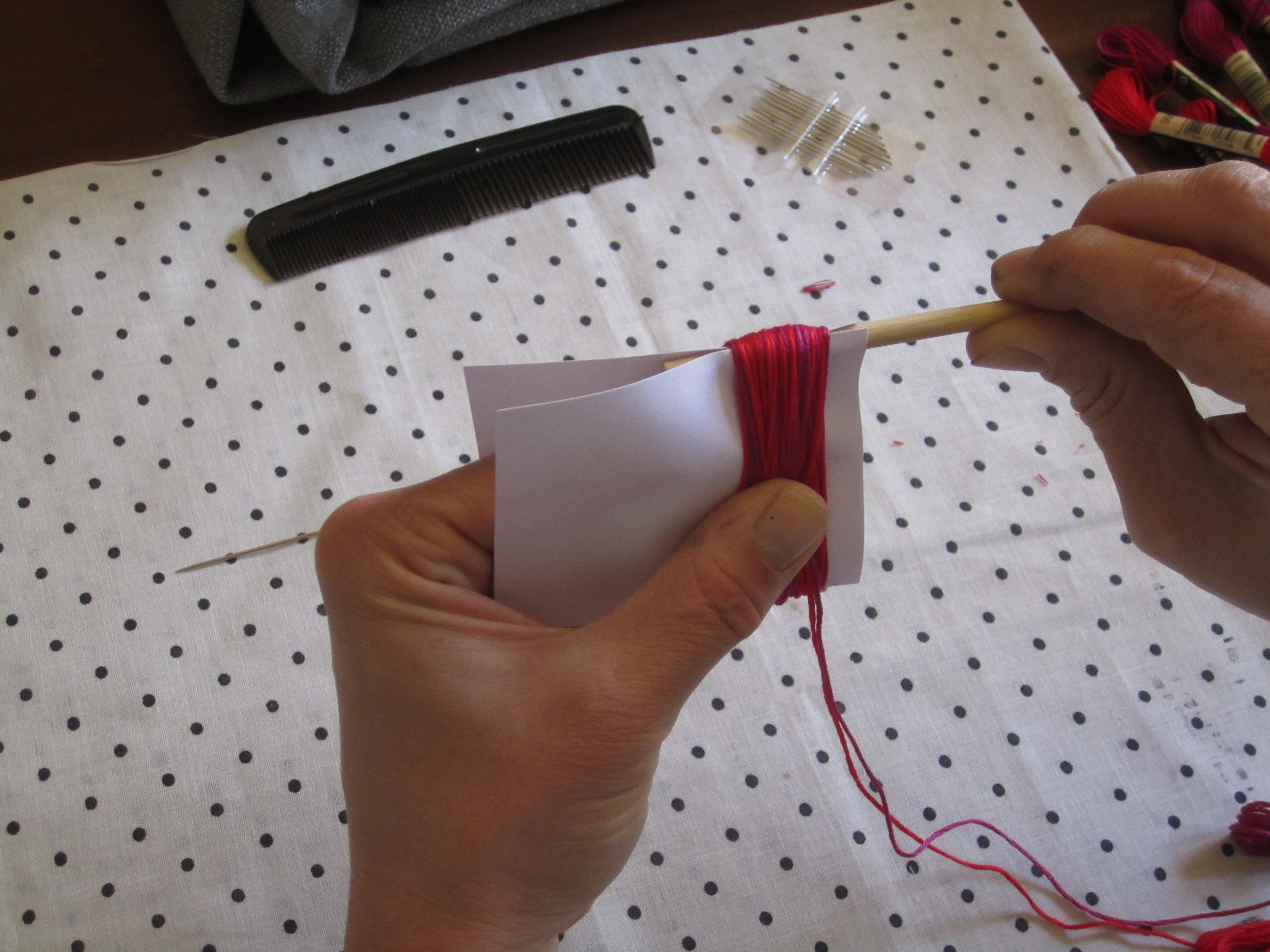 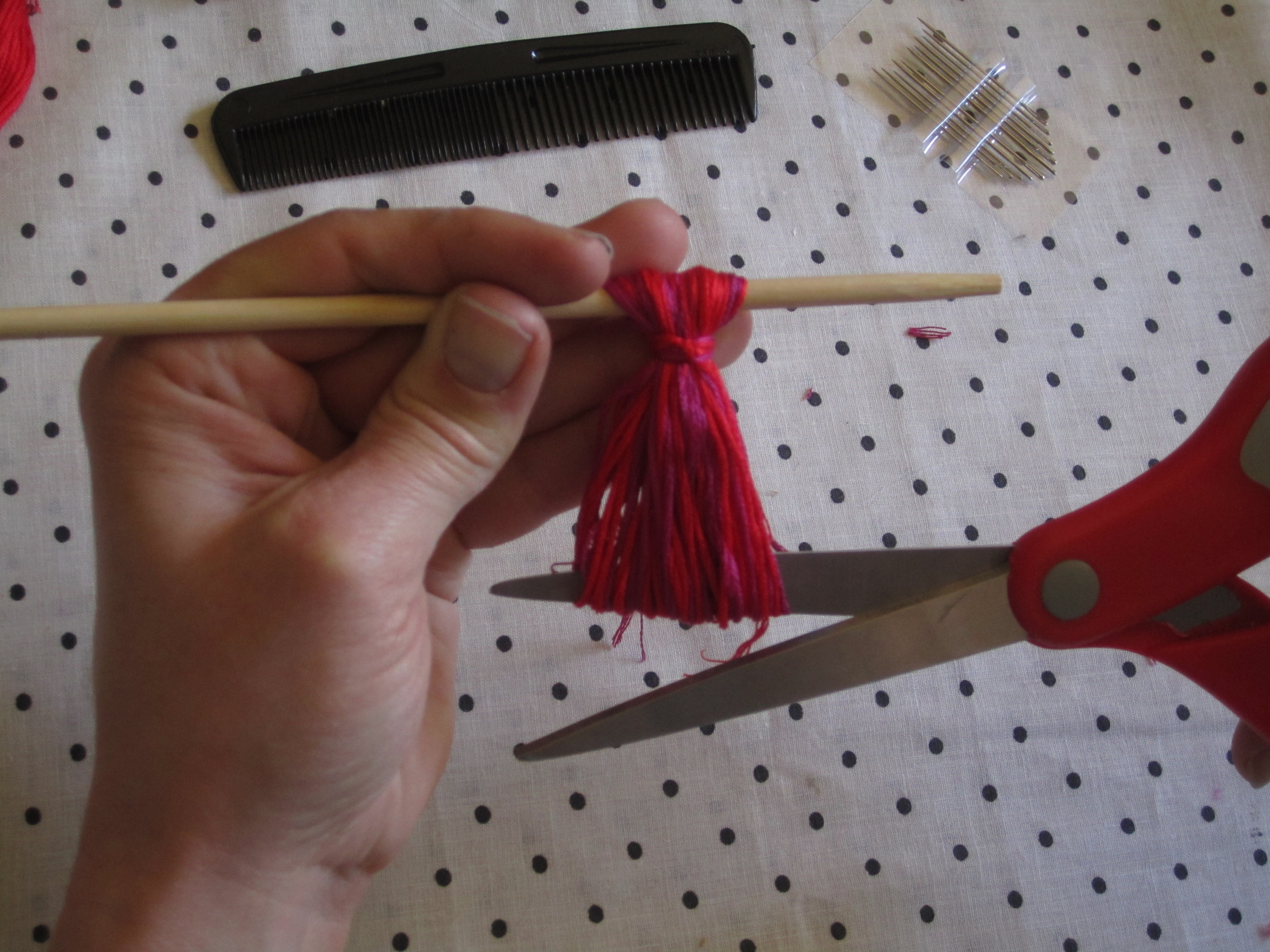 Use scissors to cut the looped ends at the bottom

Use your comb to separate the threads (combing the tassel hair was my favorite part). If you don’t have a comb you can use the needle to separate threads, but it’s neither as effective nor as fun. 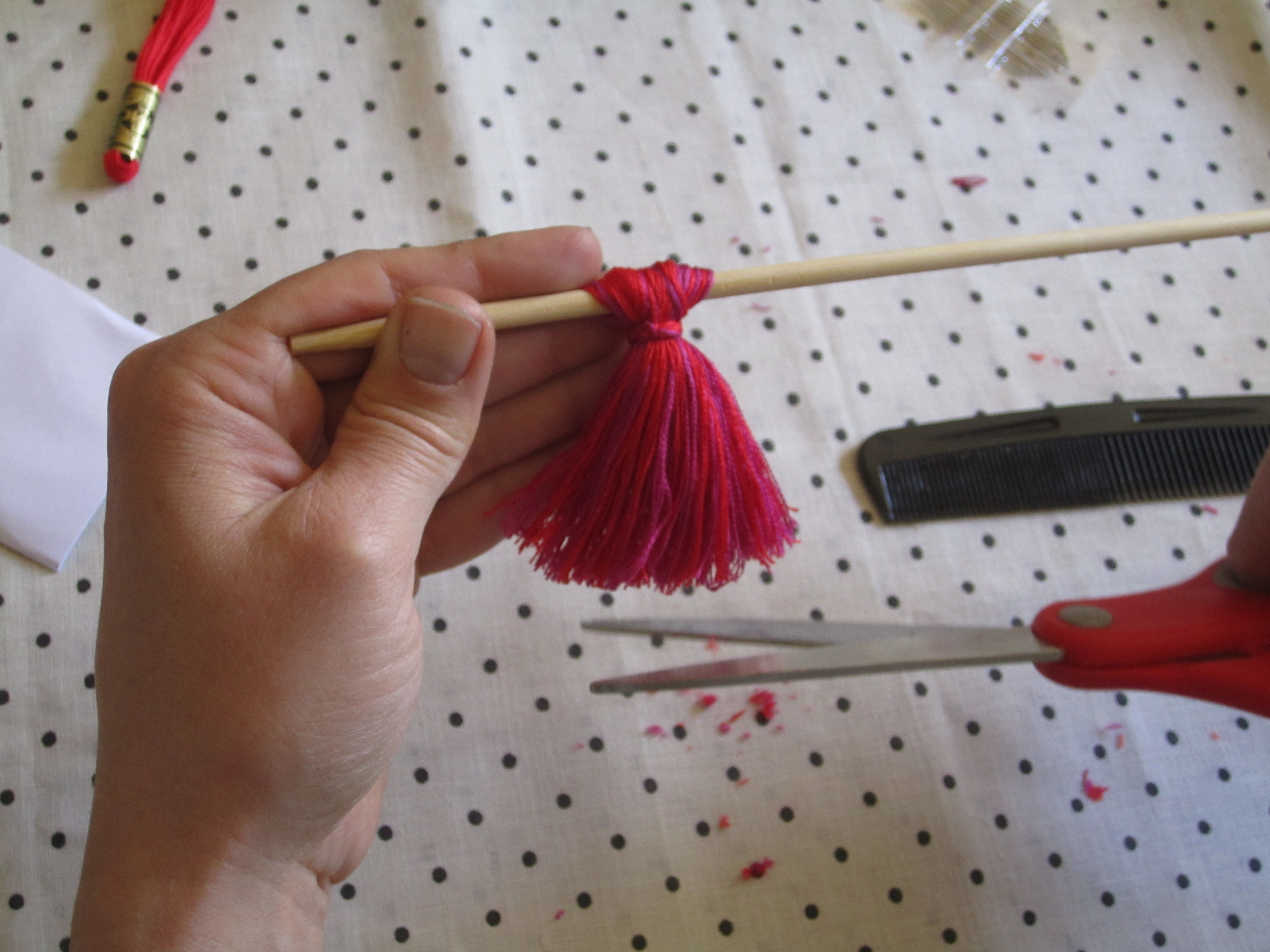 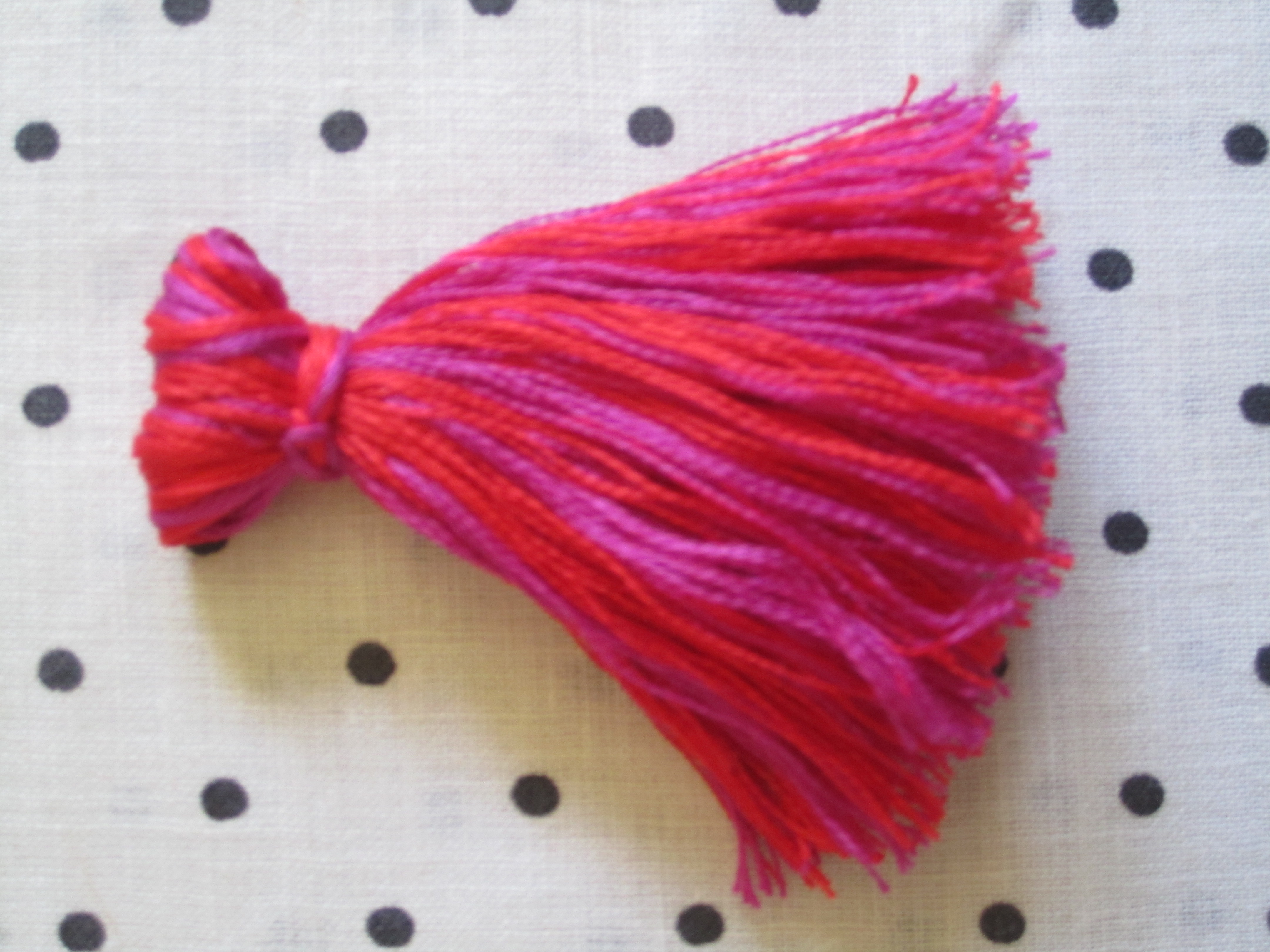 I’ve used tassels on a pillow, a shower curtain (which I’ll show you next week, along with the updated bathroom) and on my cat. What else should I be-tassel? Are you planning to do any projects with tassels soon? Let us know in the comments!

14 responses on “Forbidden [shower curtain] Love, or Why I Tied 100 Tassels (and how you can do it too)”