This project has been on my list for as long as we’ve lived in the house.  In damp mid-winter, when the days are short and my bones are cold, one of my favorite indulgences is a hot bath with a book and a glass of wine.  I’ve indulged myself plenty over the last couple of years, but the arrangement for where to rest my book and drink has been gravely unsatisfactory.  I decided to suffer no more, and after just a couple hours of messing around in the shop I had a solution that would elevate my glass, book and – indeed – the whole bathing experience: a bath caddy.

As is the norm when I tackle these kinds of projects, it was not necessarily a straightforward process.  I won’t share this as a tutorial but rather a report, so hopefully you can get some ideas and inspiration to make your own!

I knew I wanted a slatted design, and so I started by cutting some boards we already had to a length that would span the tub.  In the picture below the pinker strips are vertical grain fir and the white strips are pine. 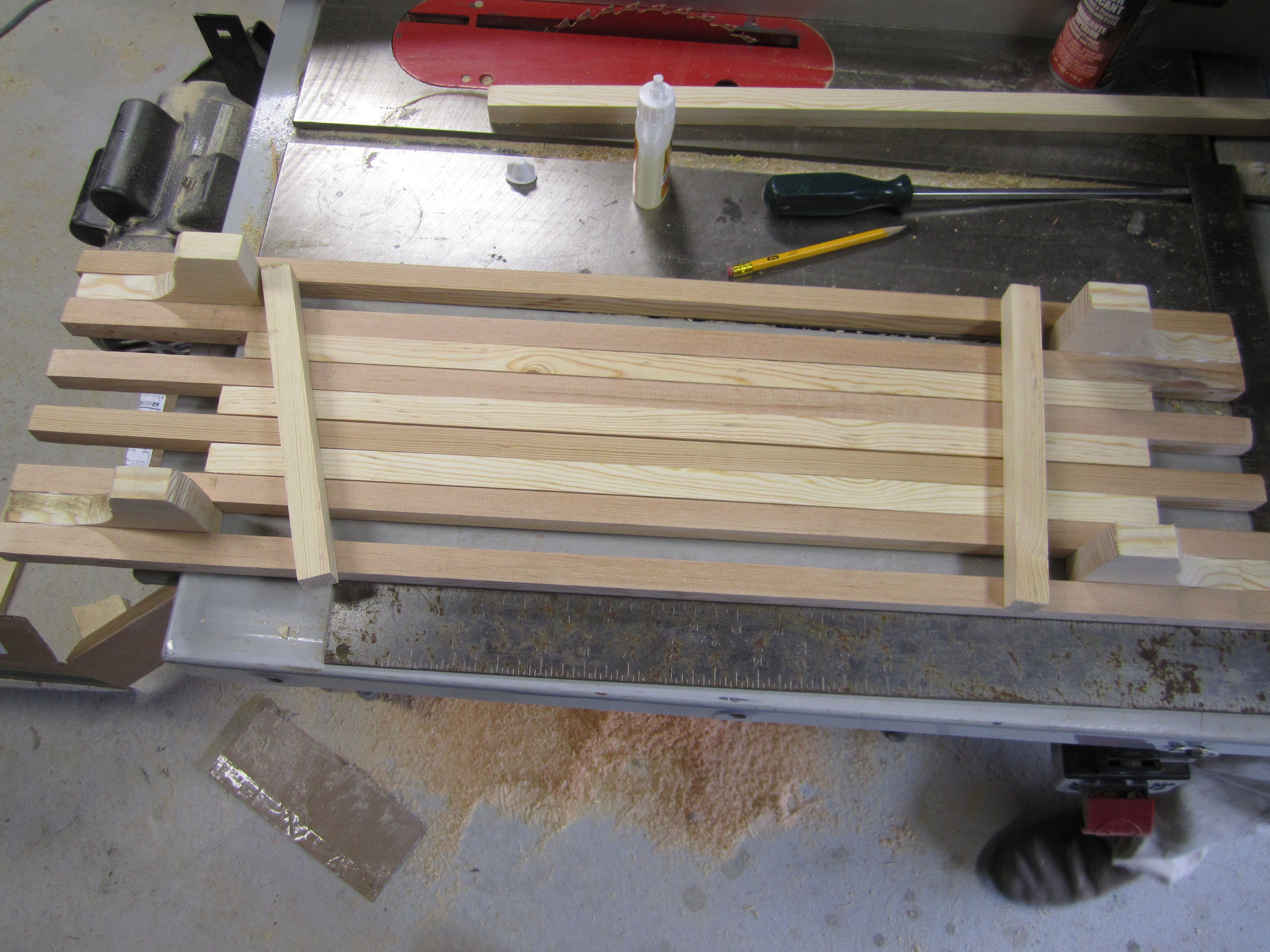 To make the curved pieces that would fit over the edge of the tub I just made a simple template by tracing the curve onto a piece of cardboard (in the photo below left).  I started cutting it out on the bandsaw (below right), but it got pretty squirrelly so I finished the job with a handheld jigsaw.

I switched my design plan midway and decided that I wanted empty space between the slats, so in the photo below the white pine slats are just there as spacers.  I used a combination of Gorilla Glue and nails to hold everything together. 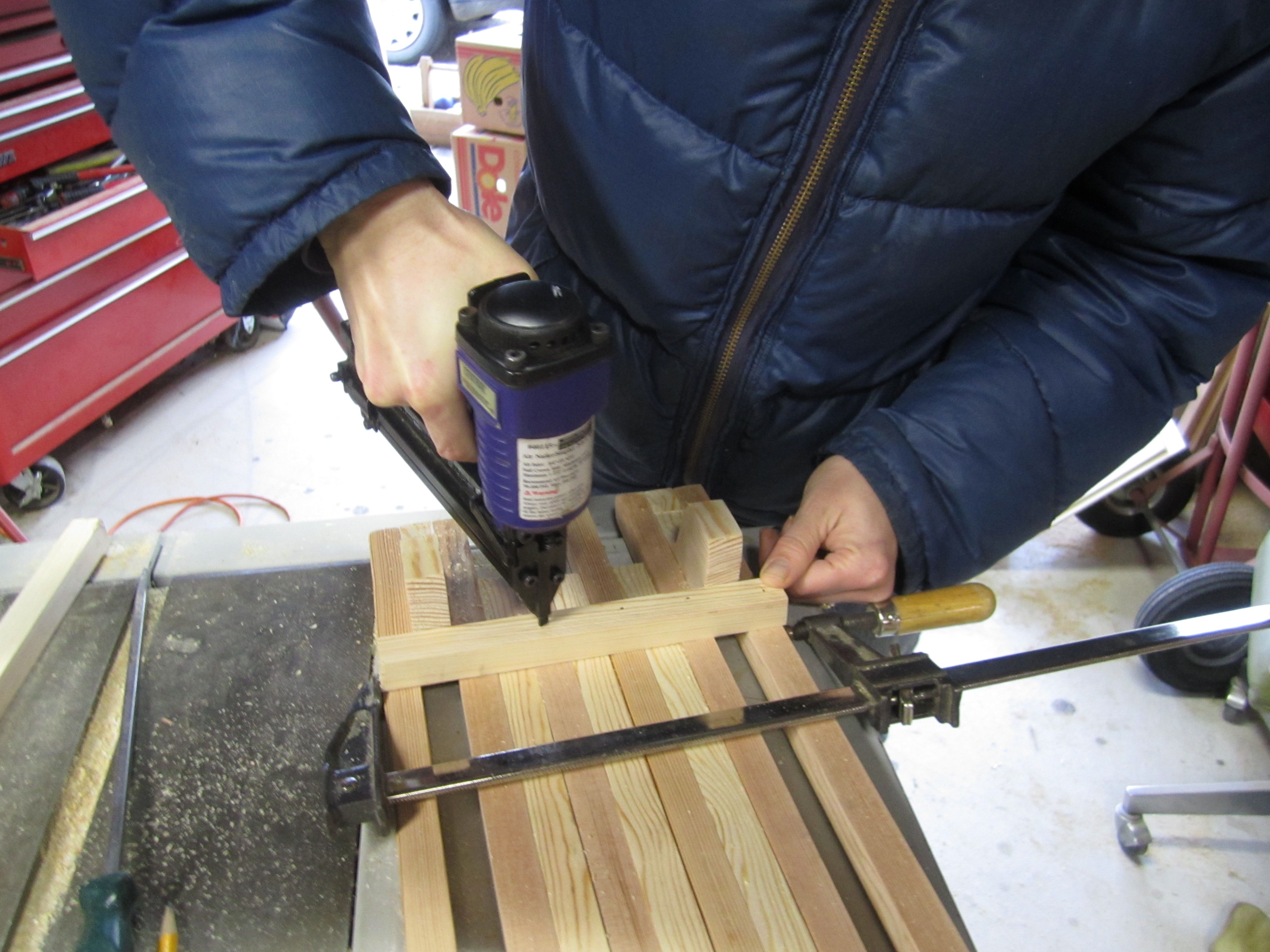 After everything had dried it felt sturdy, but I wasn’t that happy with the way it looked.  Though the side view was okay, I really didn’t like the way the bottom bracers weren’t flush with the slats.

So then, with the aid of a chop saw and protective eyewear to shield us from the whizzing little cubes, Cameron and I cut small squares and glued them in place.  We chose to orient the grain of the cubes in the opposite direction so it would (hopefully) look more deliberate.  At this stage of making something I inevitably get discouraged by how shoddy things look.

But after a few passes with the orbital sander and two coats of Tried and True (one of my favorite finishes) I was much happier! 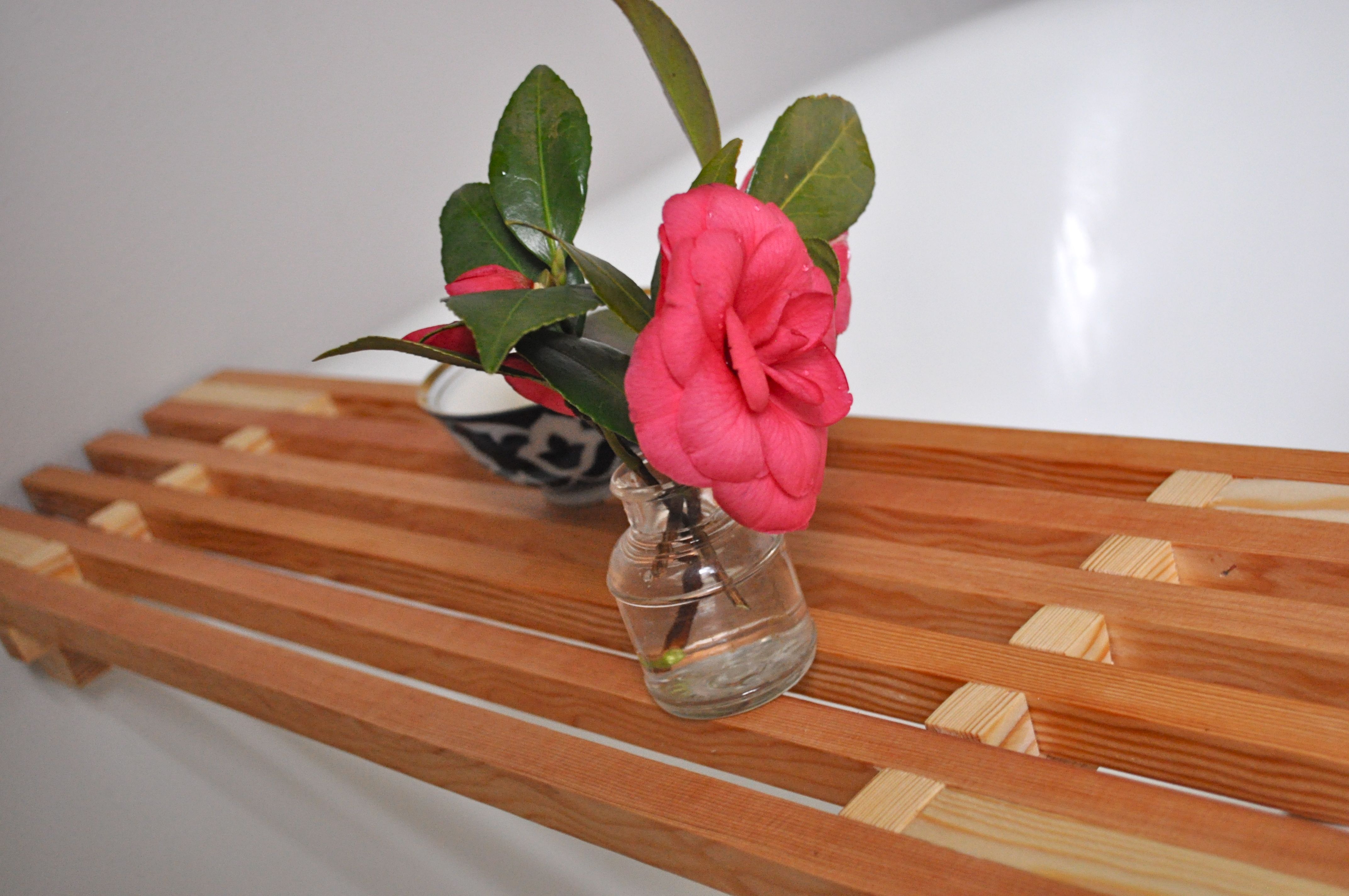 I haven’t shared this room on the blog before, and there are a few tasks I want to complete before sharing it in its entirety (I’m looking at you boob light), but the space is cute and the tub caddy has made it better. 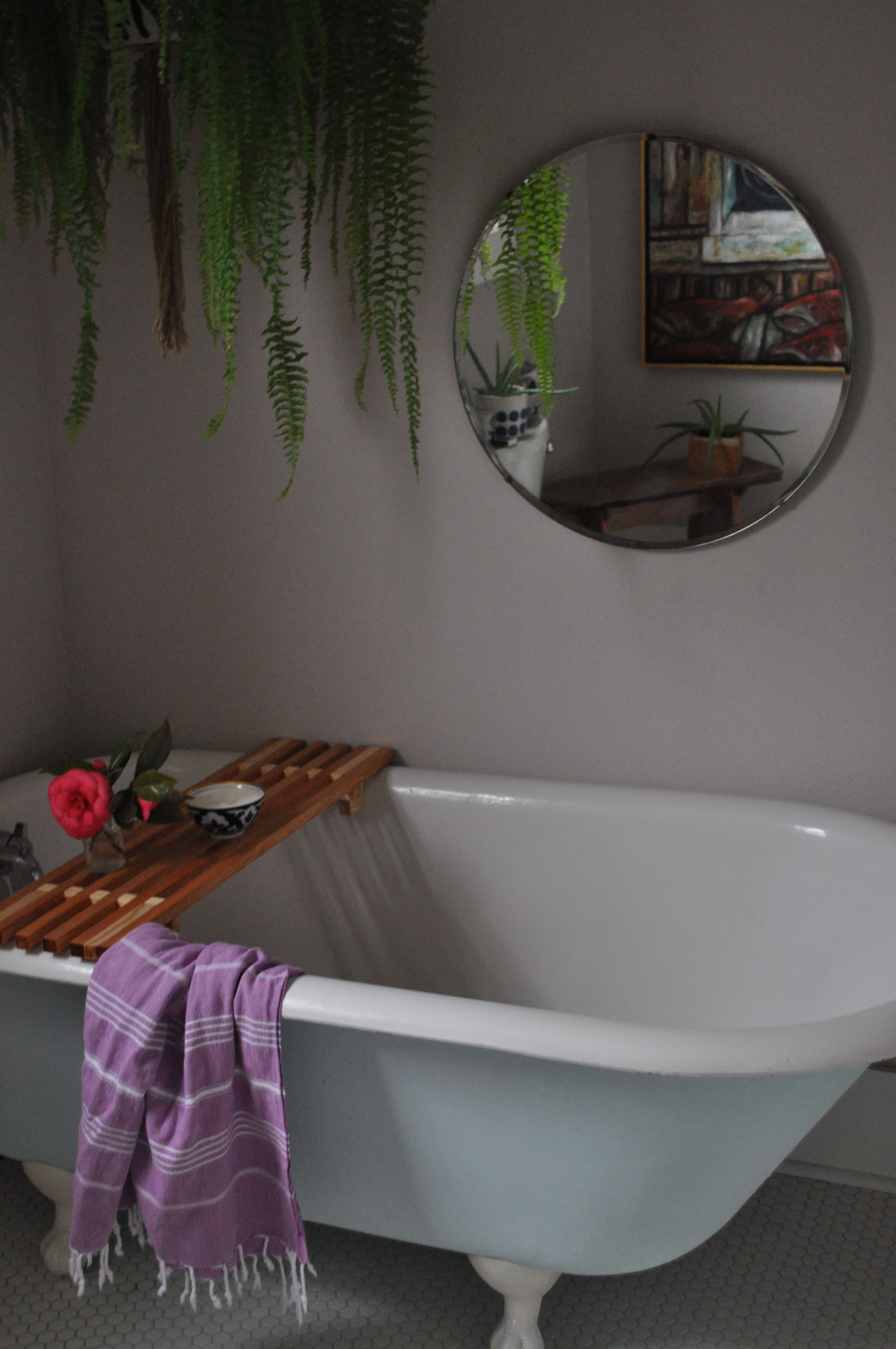 I recently hung the round mirror over the tub and I like that it reflects this painting (titled ‘Fish Camp’) by Alaska artist Alex Combs that hangs on the opposite wall.  I subscribe to my mom’s decorating edict that every bathroom needs a naked lady.  Cameron’s dad built the bench below the painting. 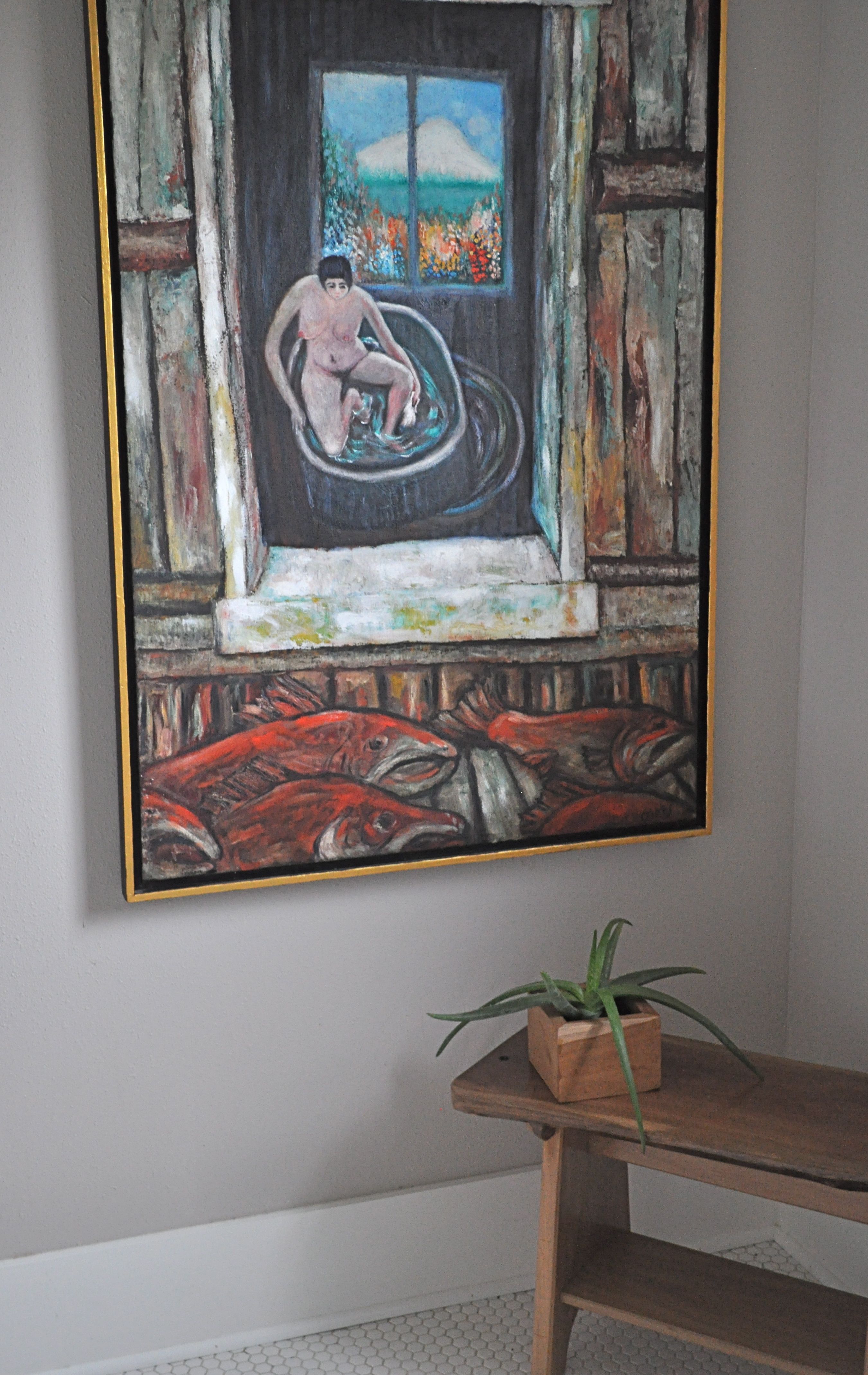 Eventually we’d like to make a stained glass window for this room, but for now we’ve settled for vinyl privacy film (good from far and far from good) and a small stained glass piece that Cameron made for me many years ago.

I hope you’ll indulge me as I wander down a wee tangent – I don’t feel like I can show you the glass without explaining what it is.  It depicts one of my favorite sea critters, a sea butterfly, or Clione limacina. They’re tiny, no bigger than an inch and usually much smaller.  I’ve found them floating near docks in both Oregon and Alaska, but their range is much larger.  They’re gorgeous little creatures, propelling themselves through the water with tiny wings. 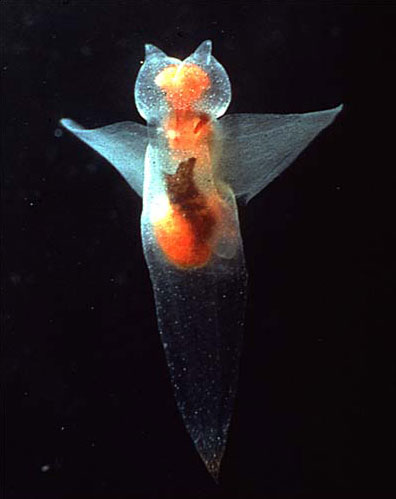 Sea butterflies are ferocious hunters that prey on another kind of winged snail.  When it’s near, sucker-covered arms like an octopus’s shoot out from between their horns to ensnare their prey, then a barbed hook scrapes the flesh from the shell.  Thank goodness they grow no bigger than an inch, right?  If you’re interested, this youtube video in a language I don’t understand at all (but with an awesomely weird soundtrack) shows them in action:

So there’s the bath caddy, a glimpse at our downstairs bathroom, and a little voyage into the weird world of marine critters. 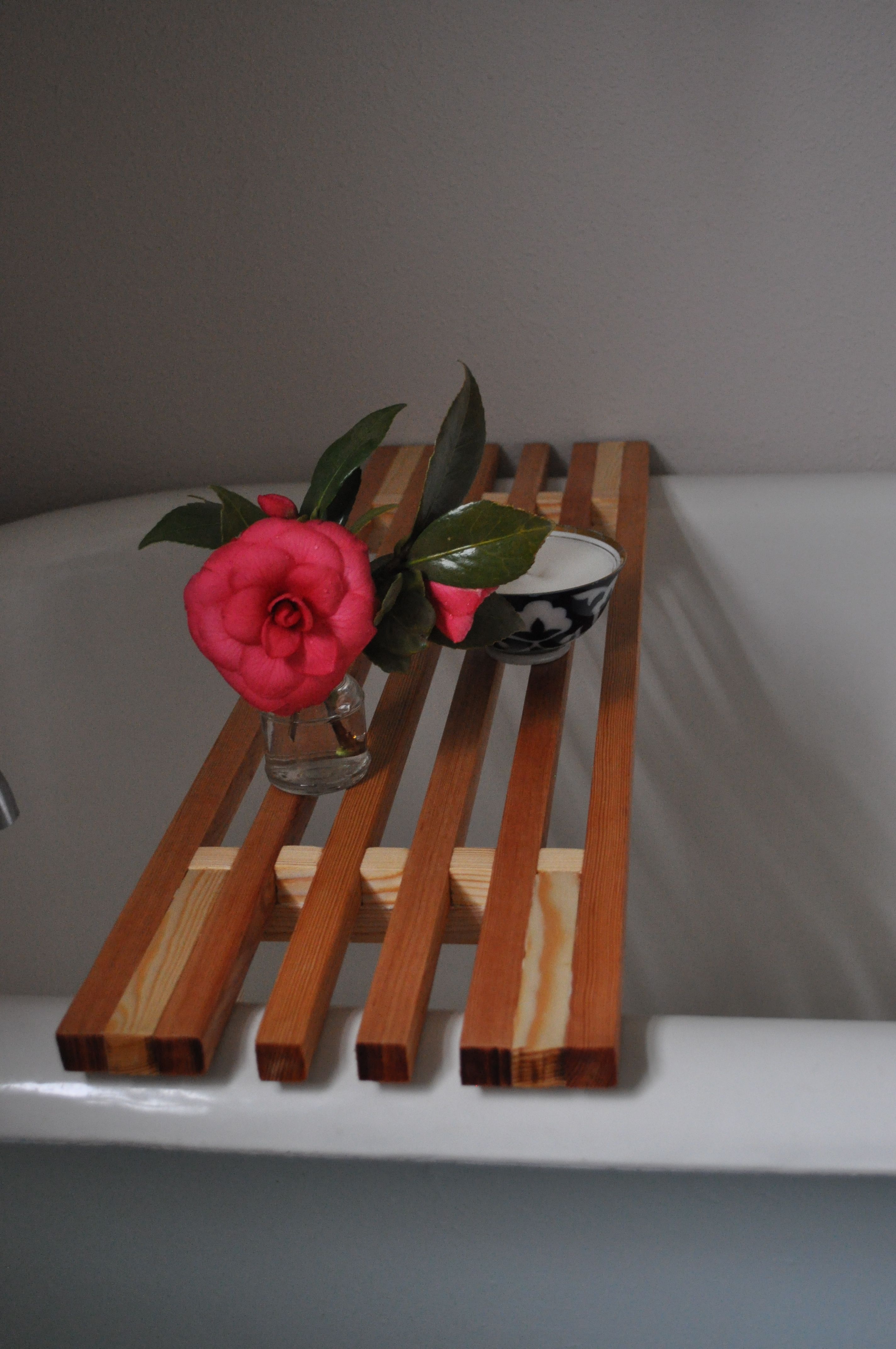 Thanks for reading along; I hope you have a wonderful week!

16 responses on “Katie’s House: A Bath Caddy for the Downstairs Bathroom”