When I was a little girl, my favorite books and movies were ones of transformation. In particular I loved stories of neglected horses who, because someone was able to see potential beneath their woebegone exteriors, were transformed into show horses or race horses with the aid of a curry comb, a bag of oats and some love. I’d like to introduce you to my stable of beauties, safely rescued and ready to be coaxed back from the brink of death with proper care – and a highly descriptive montage of training, setbacks and, ultimately, triumph. Set to stirring music. It might be presumptuous, but the way I see it I am to thrift store chairs as Mickey Rooney’s jaded jockey-turned-trainer was to Velvet and her horse, Pie, in National Velvet. 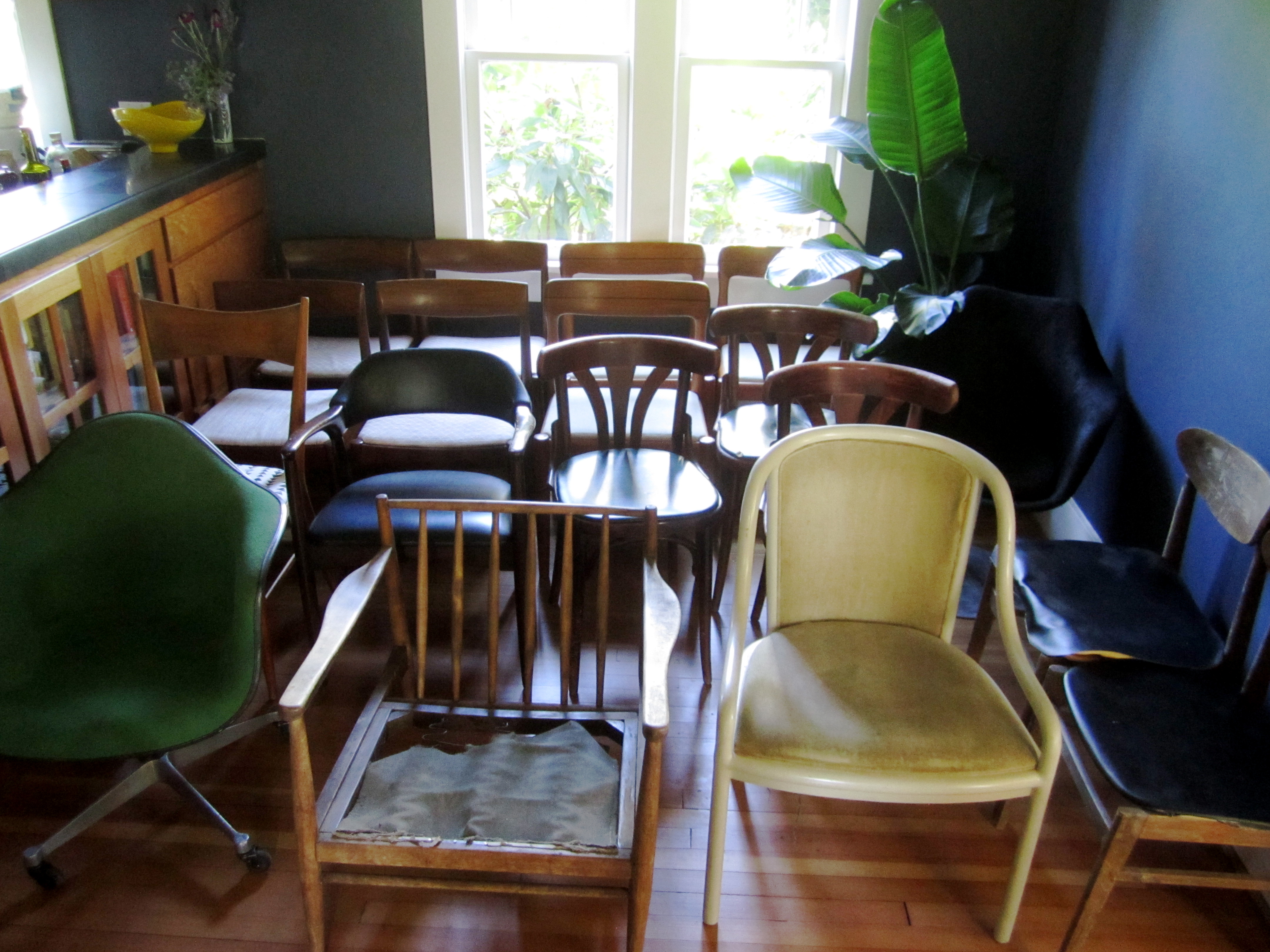 How many people live in my house? Two. By my calculations, and also taking into account the three chairs not pictured, there are 10.5 chairs per each human in this household. 5.25 chairs per every mammal that resides here. We also have couches and kitchen stools, so if we were counting actual seats and not just chairs then that number skyrockets and – I’m afraid – it might be a bit excessive. But those chairs are beautiful! And such bargains! And so loaded with potential and they need me.   You’ve met much of my stable already here on the blog; seen the transformations of some, and read about the plans for others.  Today I want to introduce you to a few you haven’t met, and first up is this Ward Bennett chair. I found it in the book section of a local thrift store, bedraggled and abused and in need of some serious attention. Under the soiled upholstery dwelt the bones of a thoroughbred, and as I gingerly perched on it to assess its soundness I knew I couldn’t leave it there. The price tag read $2.99 and I carried it (dragged it) home, exultant. 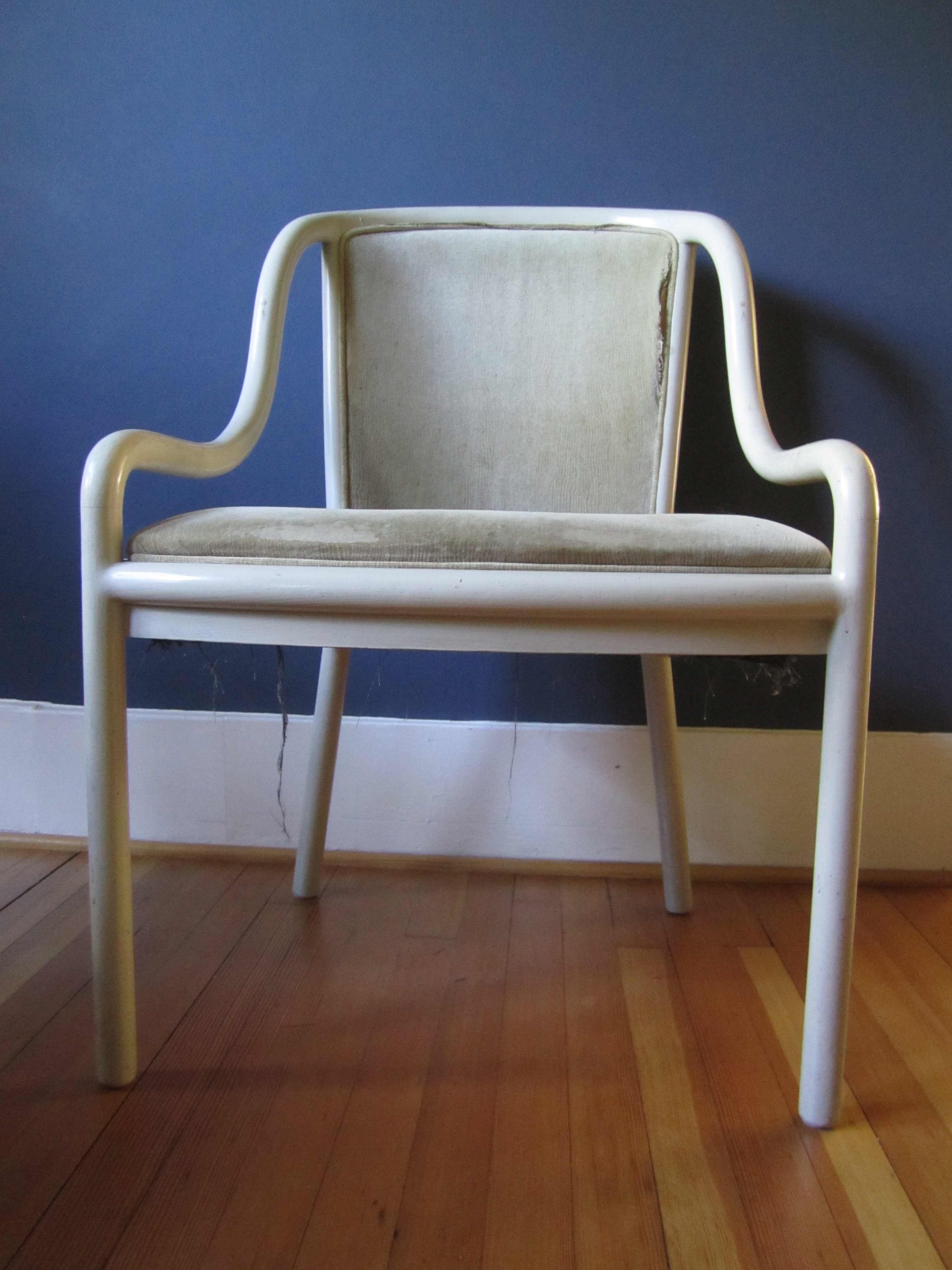 A tag on the bottom of the chair reads Ward Bennett Designs for Brickel Associates.  Indulge me for a moment and let me transform from Mickey Rooney horse trainer to a modern day Sam Spade (perhaps a Veronica Mars?) sleuthing for the past of this chair.  I learned that Ward Bennett was a prolific and well-known designer who has designs in the Museum of Modern Art’s permanent collection.  On the Herman Miller site (they are still making and selling a couple of his chairs) they say that Bennett “learned a great deal about lumbar support, the importance of chair arms, and designing the right “pitch” from working with the doctor who treated John F. Kennedy’s bad back.”  Folks, this chair is practically presidential. I found this poster of Bennett’s designs for Brickel, but though the chairs in the middle of the fourth row are very similar they are not exactly the same. 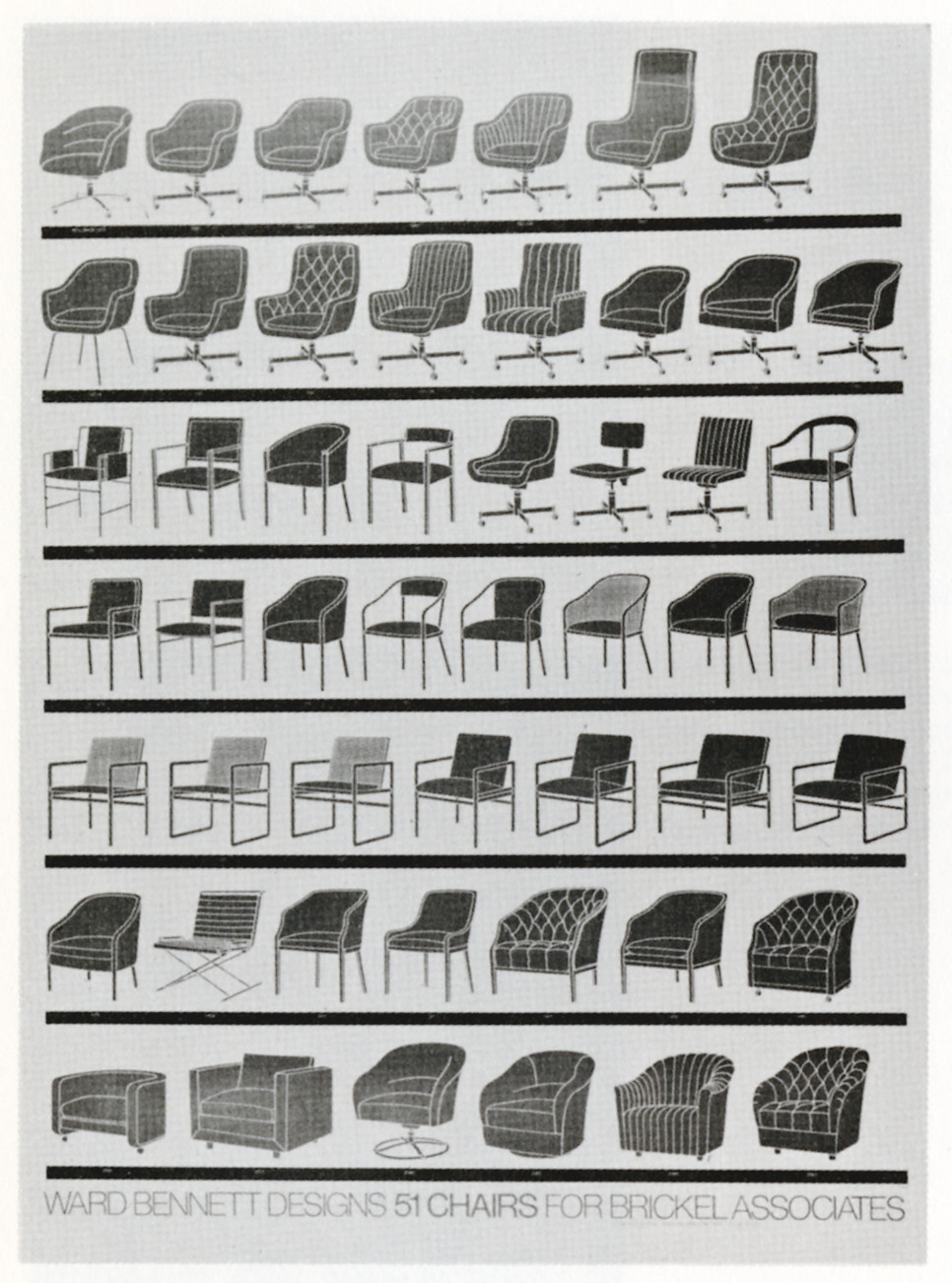 Though the bone-colored finish is a little marred, I’d be reluctant to try painting it myself. This kind of hard, enameled finish is hard to recreate at home and I fear I’d end up with a drippy mess. I may look into having it professionally lacquered, but my first choice would be to try to make the white work for me. Up close, the original velvet upholstery has a subtle faux bois pattern, which would be fun to replicate. I’m considering a black velvet for the seat and front and then something unexpected – like an embroidered piece – for the back. I probably wouldn’t do the whole thing with this much pattern – though this chair makes it tempting – but I’d love something similar for the back. I’m on the hunt at thrift stores for something with rich colors and a not-too-traditional motif. 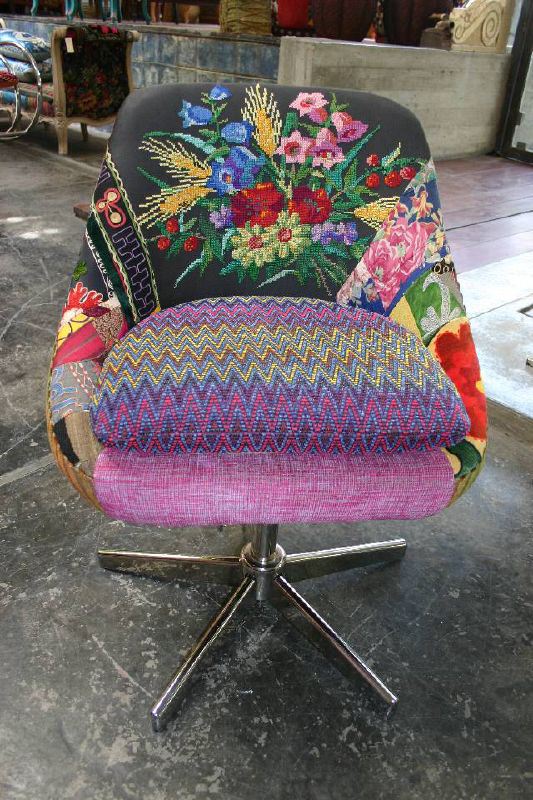 The next in my stable of diamonds-in-the-rough is also mid-century modern, and also a lucky thrift store find. I found it one morning at a local Goodwill and it was definitely a case of being in the right place at the right time.  I’ve never bought anything of note at this particular store, so when I spotted this little honey I broke into a full sprint until I reached it then cradled it possessively in my arms all the way to the cash register. 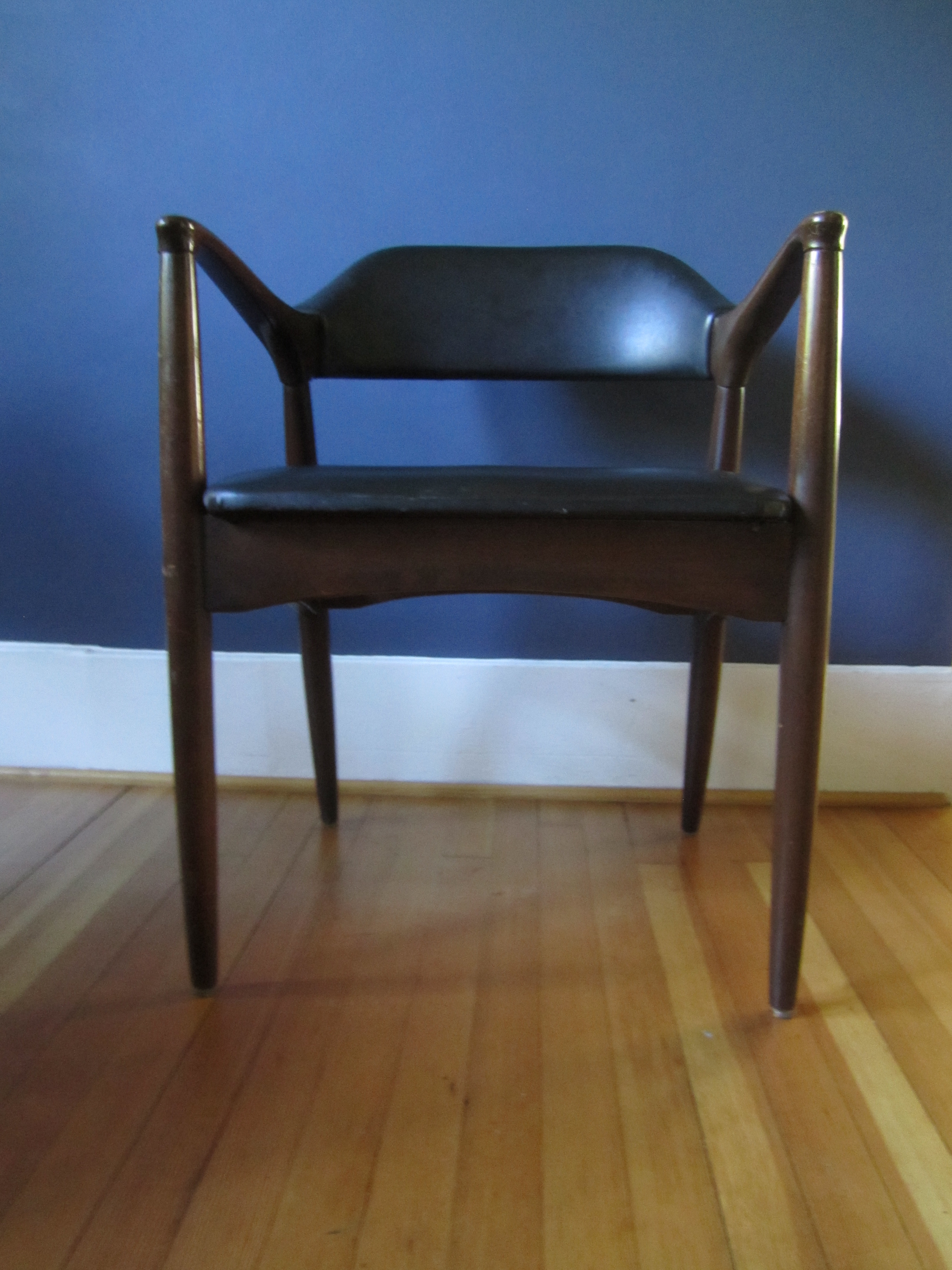 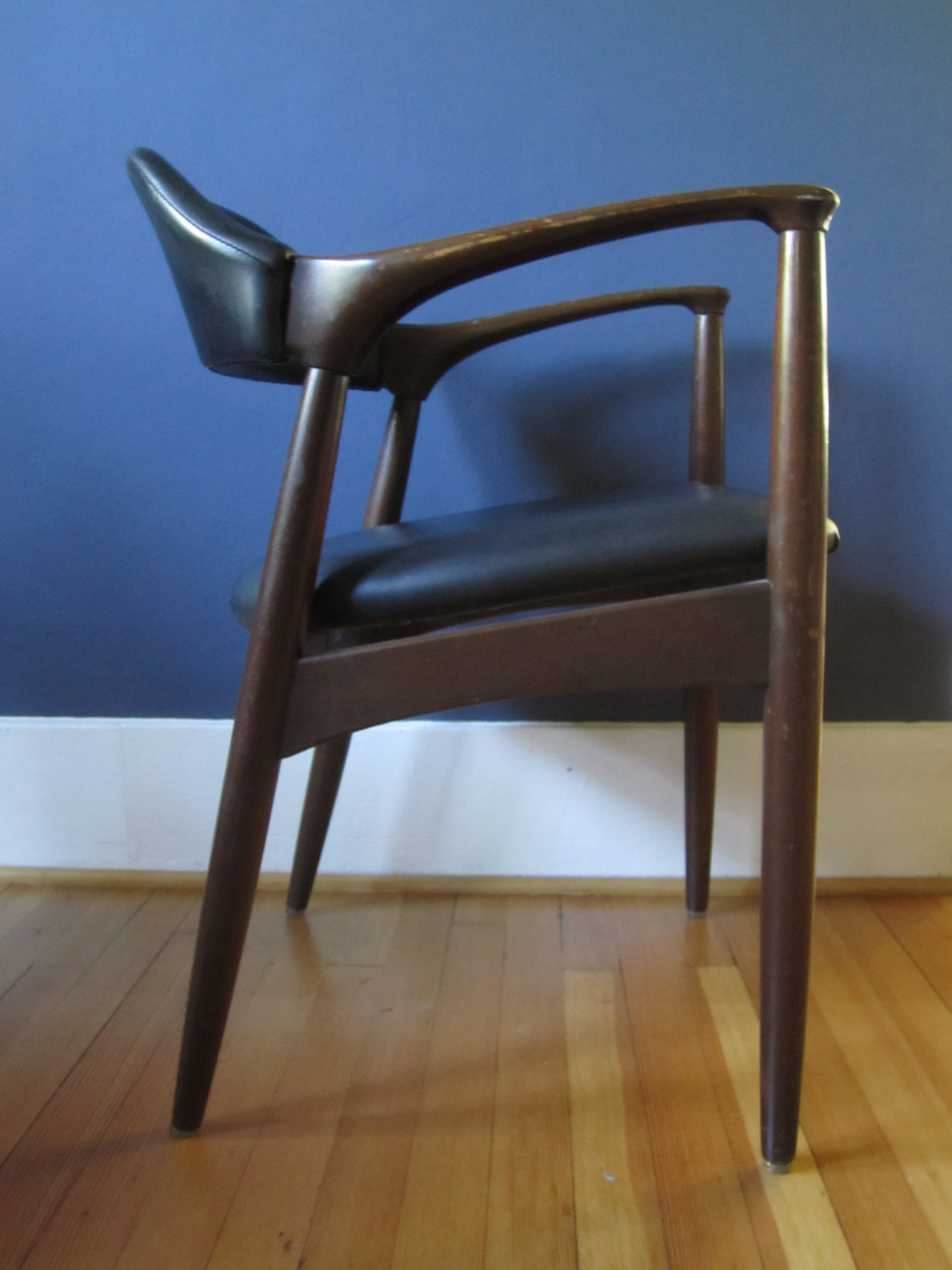 In contrast to most of the chairs I bring home, this one’s upholstery is in pretty good shape.  No weird stains, no gaping holes, no offensive patterns or smells.  The wood is pretty dinged up, and I’m not sure yet how to fix it – I fear the depth of the gouges is beyond the help of even my beloved Restor-a-Finish.

I’ve had trouble finding more about Kosuga – there’s a current website with the same name, but the text is in Japanese and Google translate doesn’t seem up to the task. I have seen chairs with the same Kosuga tag on eBay and 1st Dibs, but they don’t offer any additional information.  Searching the web, I found myself over at the Design Addict forum where this response to a query about a Kosuga chair pretty much summed up the fruitlessness of my search:   those were made……….. by Klingon craftsmen in the period of 1972-1976 in the alpha centauri region of what is now know as the french-canadian crescent valley. they were built using old-growth peanut wood and are very rare.   Ha!  The internet can really bring out the best in people. The Ward Bennett and the Kosuga chairs are ones I remain enamored of even after the thrill of discovery is gone, but I’ve also made a few missteps. Just after we moved into our house, when acquiring chairs was essential not excessive, I found a Craigslist listing for four mid-century chairs in a town about 30 miles north of Eugene. Cameron and I drove there and I gleefully paid $10 for all four plus a little ottoman. They are cute, but in varying states of disrepair. 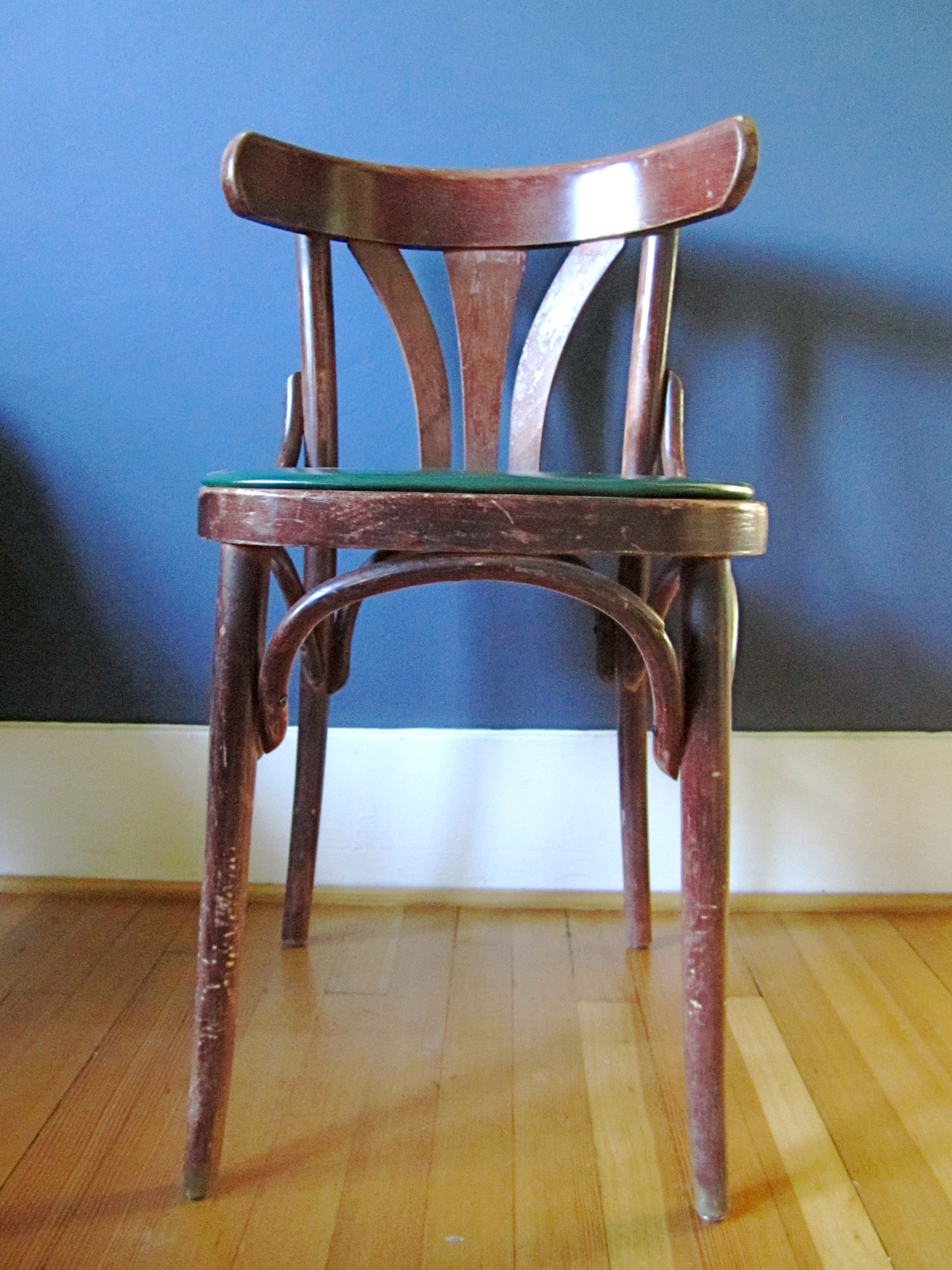 The wood is brittle and splitting in some spots, the finish is red and worn and I just can’t see myself devoting the many hours it would take to sand them down and redo them. Not when so many more alluring projects await. I’ve considered painting them – perhaps a saucy bright color – but the truth is that while the chairs aren’t exactly uncomfortable, when presented with a room containing these and all the other chairs in our house, these are always last pick. I’m pretty sure the only reason I’ve held onto them for so long is because of this picture: 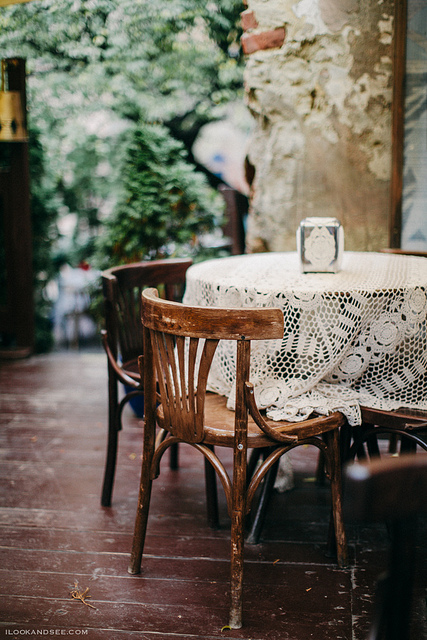 The ones in the picture aren’t in great shape either, but something about the way they look with that lace tablecloth is so romantic *sigh*.  HOWEVER, I think it’s time to let go and move on (I’m saying it here publicly so I’m accountable). Whew, this is a long post.  It’s the fever of the chairs!  I’m powerless to contain myself.  So just one more quick story to wrap up this chair saga.  This one involves an unexpected journey taken by a chair you may have already read about: the tulip chair. 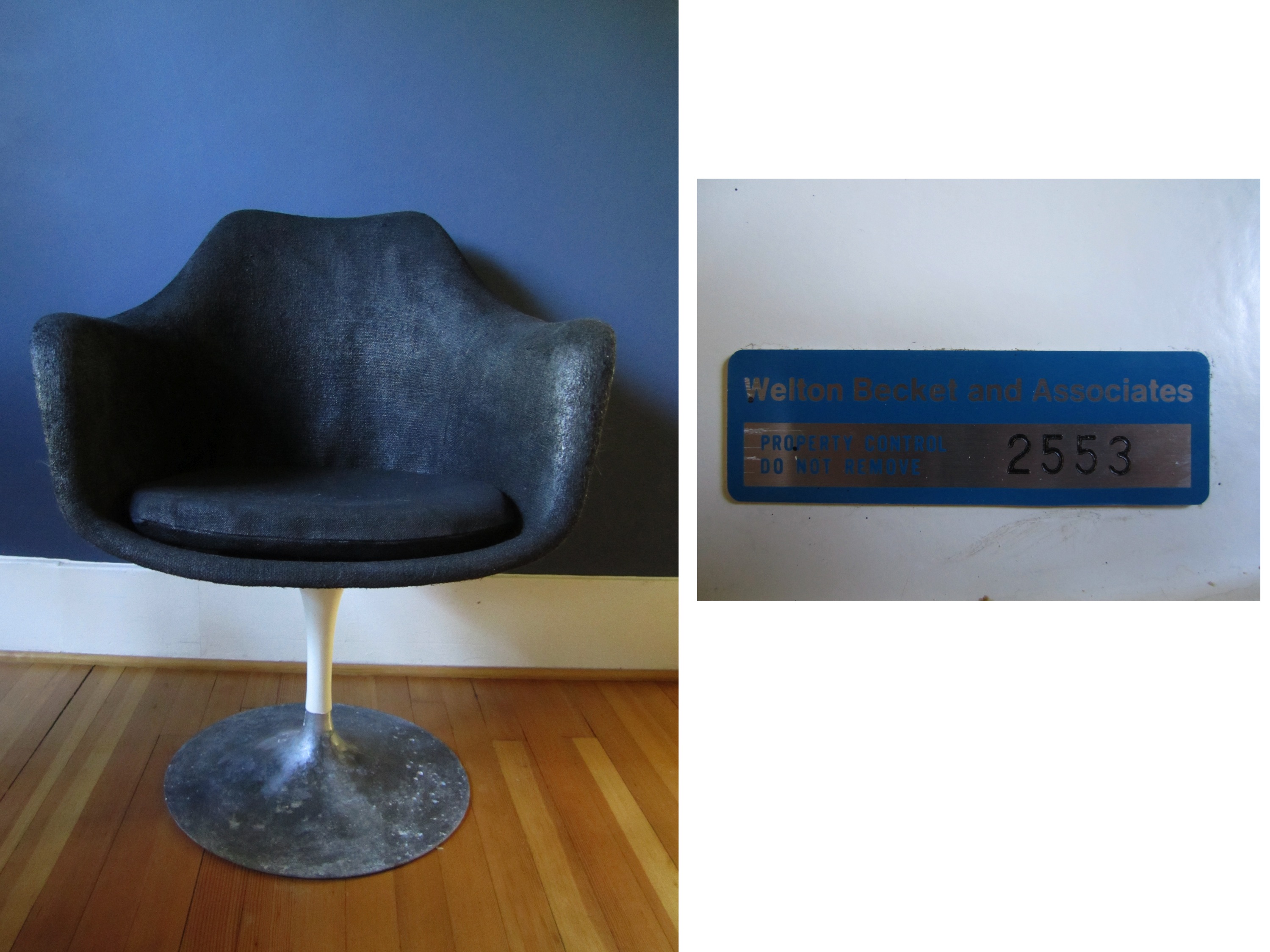 When I rescued the tulip chair it had two tags, one stating that it was made for Knoll and one that it was property of Welton Becket and Associates.  I didn’t pay it much attention at first, but when curiosity got the better of me I turned to Google and found that Welton Becket was a famous mid century modern architect and designer in Los Angeles.  He is credited for both the Pan Pacific Auditorium in LA (which has since burned down) and the Capitol Records building, as well as other buildings all over the world. 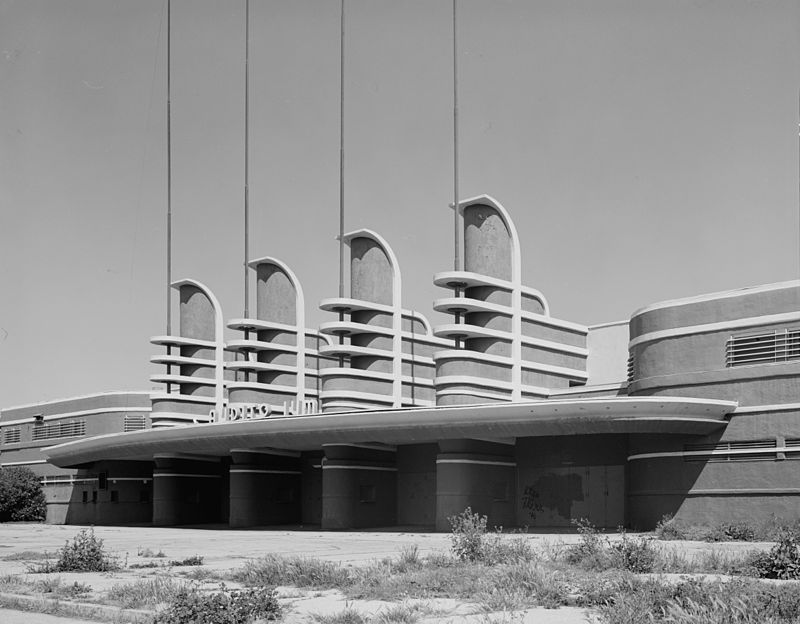 Oh that this chair could talk.  I’d give a lot to know more about how it made its way from the office of a well-known mid century designer and architect to be bedraggled and goat-bearded in a jumbled garage in Eugene, OR.  Sounds like a story I would love. Thanks for joining me on this ramble through my stable of chairs!  Mera will be back with an assuredly more succinct post on Wednesday.  See you then!

23 responses on “A Home for Wayward Chairs: Confessions of a Chair Addict”