Opal turned three at the end of December, and from my completely objective perspective she is the smartest, funniest, sweetest child the universe has ever known.  For example, upon being congratulated for not having any accidents on a recent afternoon, she explained “my kidneys didn’t make any pee, so that’s why I didn’t have an accident.”  Also, she has told me several times that she writes a blog called “Brown House West.”

Her bedroom was really cute before, but definitely babyish, so we decided to start to transition to a look that can grow up with her.  Here’s what it looked like before, during the halcyon days of summer:

And here is what is looks like now, as we start to emerge from winter: 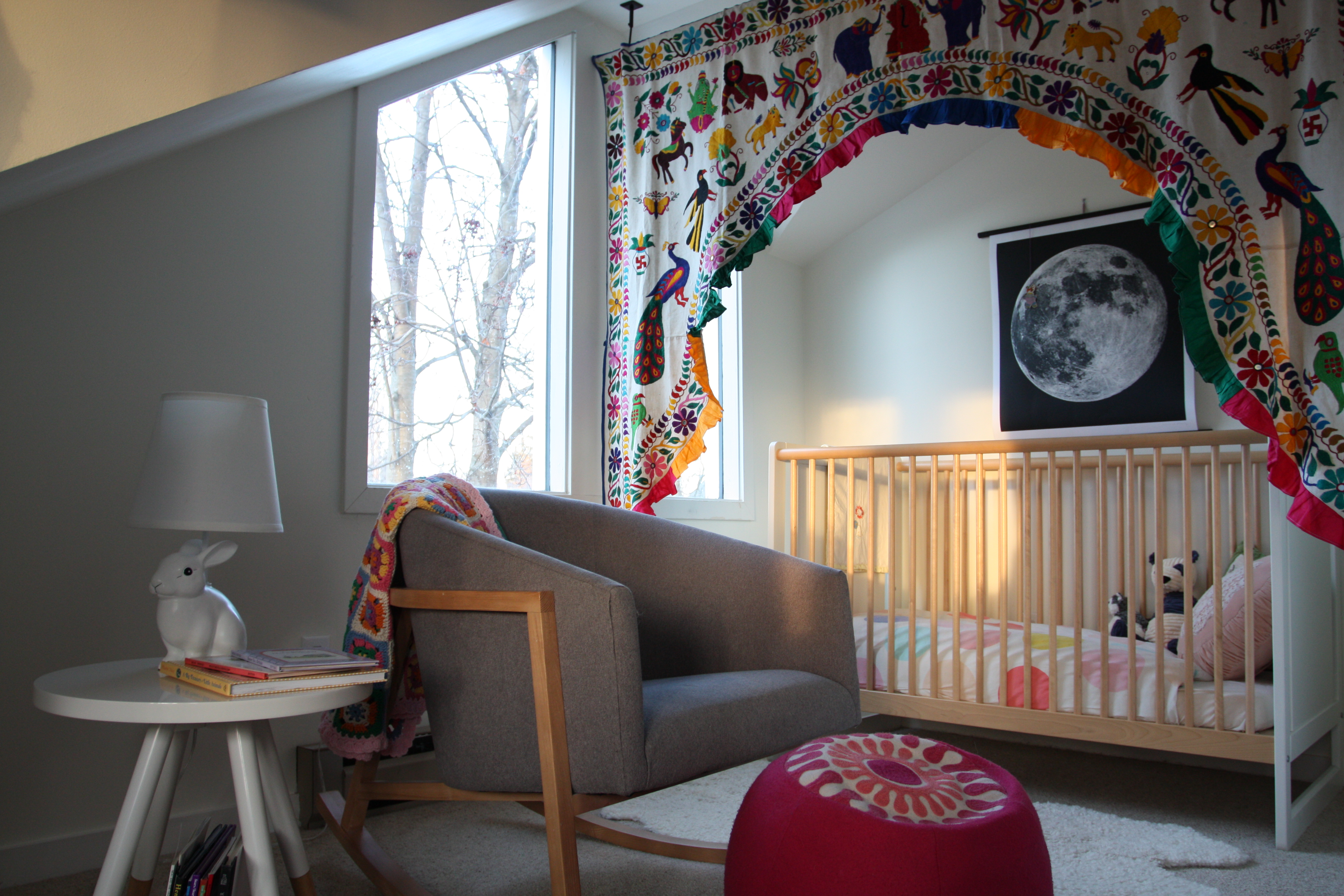 Opal helped me peel the forest creature decals off the walls and we painted over the green and blue with the same white that we used in the living room and kitchen (Pittsburgh Paint’s Mother of Pearl in the no VOC version).  I loved the green wall color, but we wanted to hang this vintage embroidered toran, and it has a lot going on so white walls were the way to go. 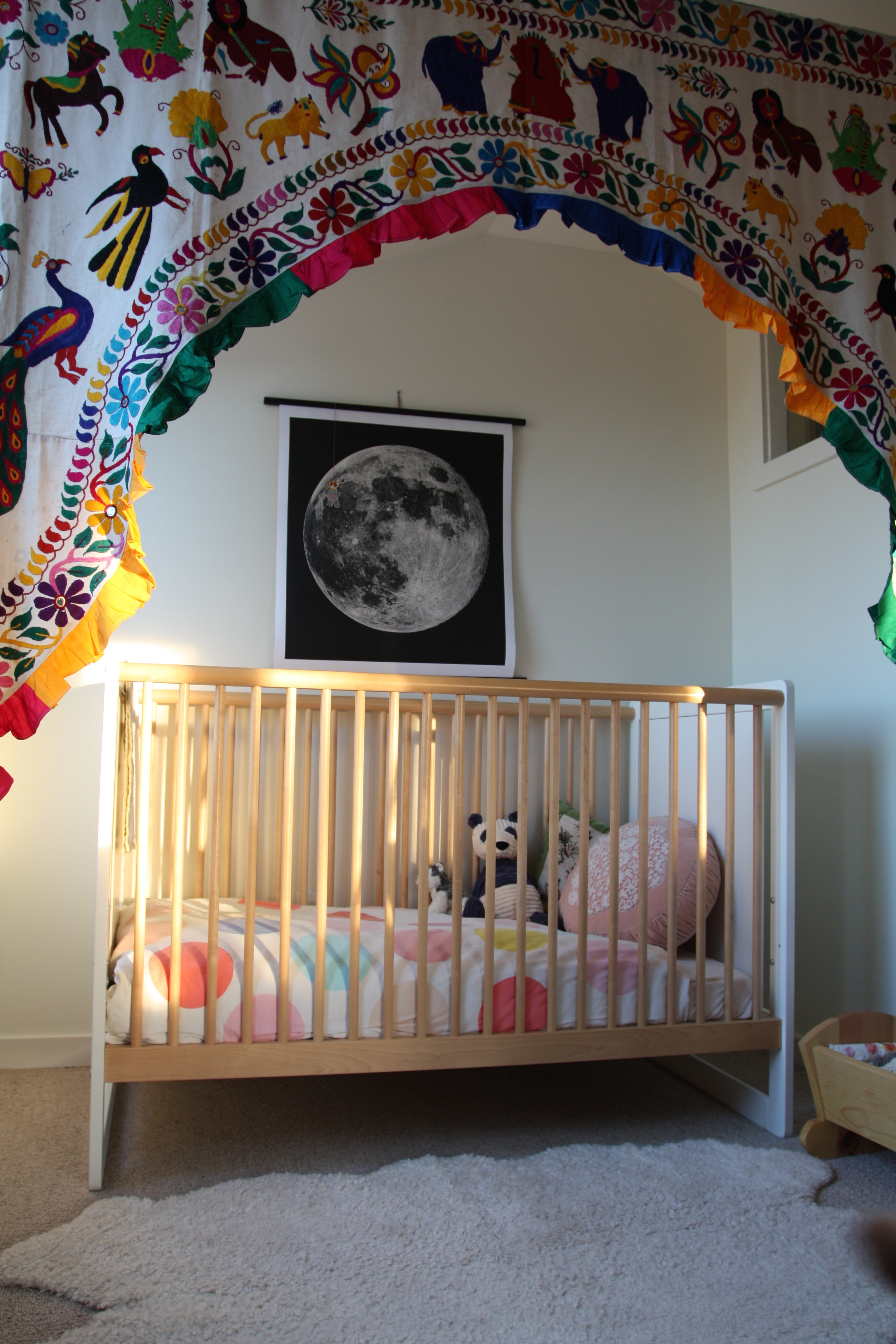 Opal’s room is full of angles and tucked-in spaces, and the toran (which I got from eBay) perfectly spans the bed nook area of the room.

I got this ceiling mounted curtain rod, and at first just used cafe clips to suspend the valance from it.  It looked droopy and a little sad so my mother in law, who was visiting at the time, suggested sewing a fabric tube to the back of the valance for the rod to pass through.  Actually, she not only suggested it, she offered to sew it.  By hand.  While Chester and I went to a movie.  Okay, if you insist! 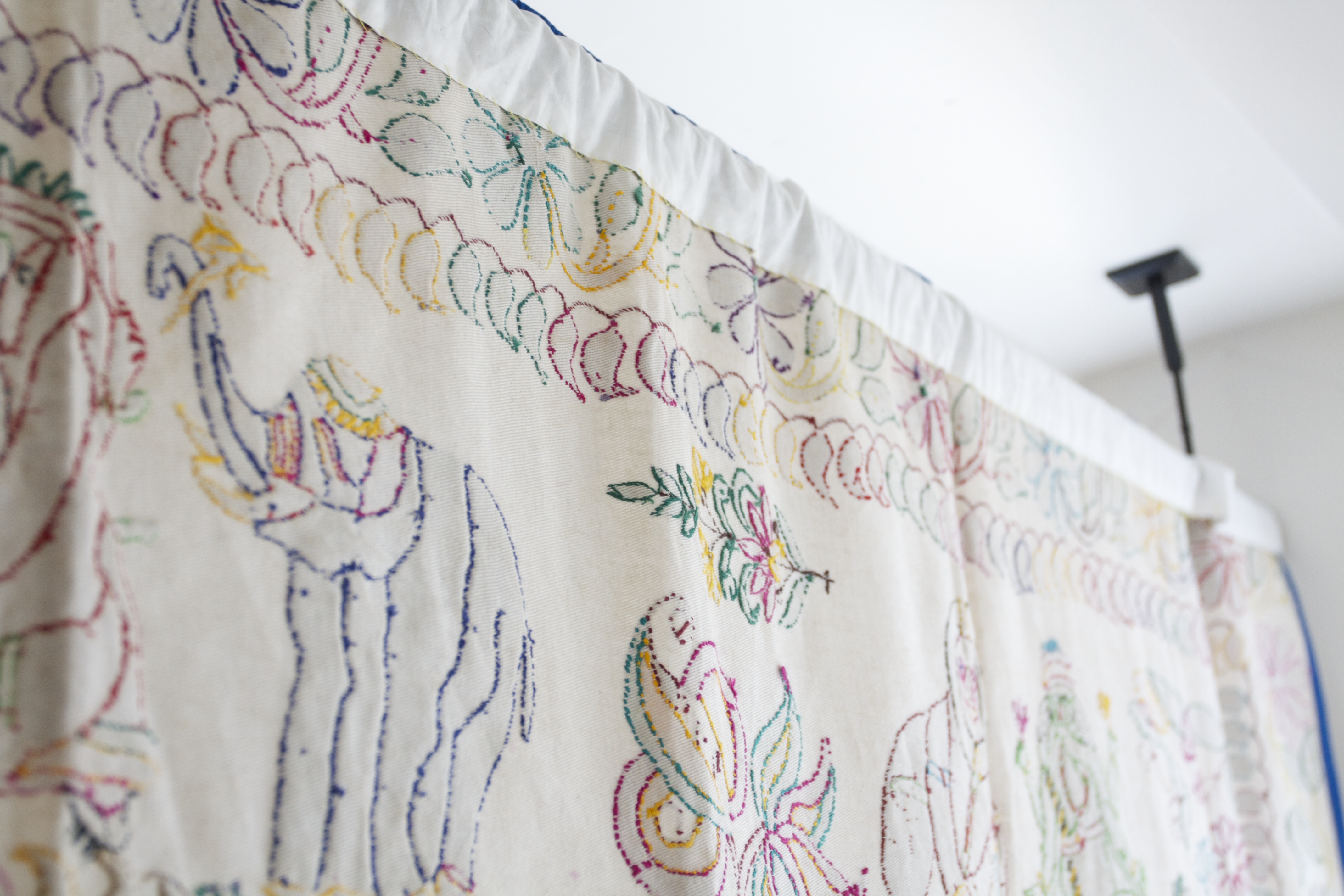 The valance is beautifully embroidered and the little mirrors glint in the rare winter sun.  Opal loves to pick out favorite animals from it (her only complaint is that it doesn’t include more purple).

I didn’t expect that Opal would still be sleeping in her crib at three years old, but it’s great and I’m going to ride it out as long as possible.  She doesn’t climb out, and at this point she’s so big that she could probably do it safely.  At some point we’ll put the old captain’s bed that was built for this nook back in here.  I think the toran will look even better with a bed that fills the space completely.

The moon chart is a silk screen I found on Etsy.  Babar and Zephir were accidentally ripped out of the pop-up book “Babar’s Moon Trip” and this seemed like a good second home for them. 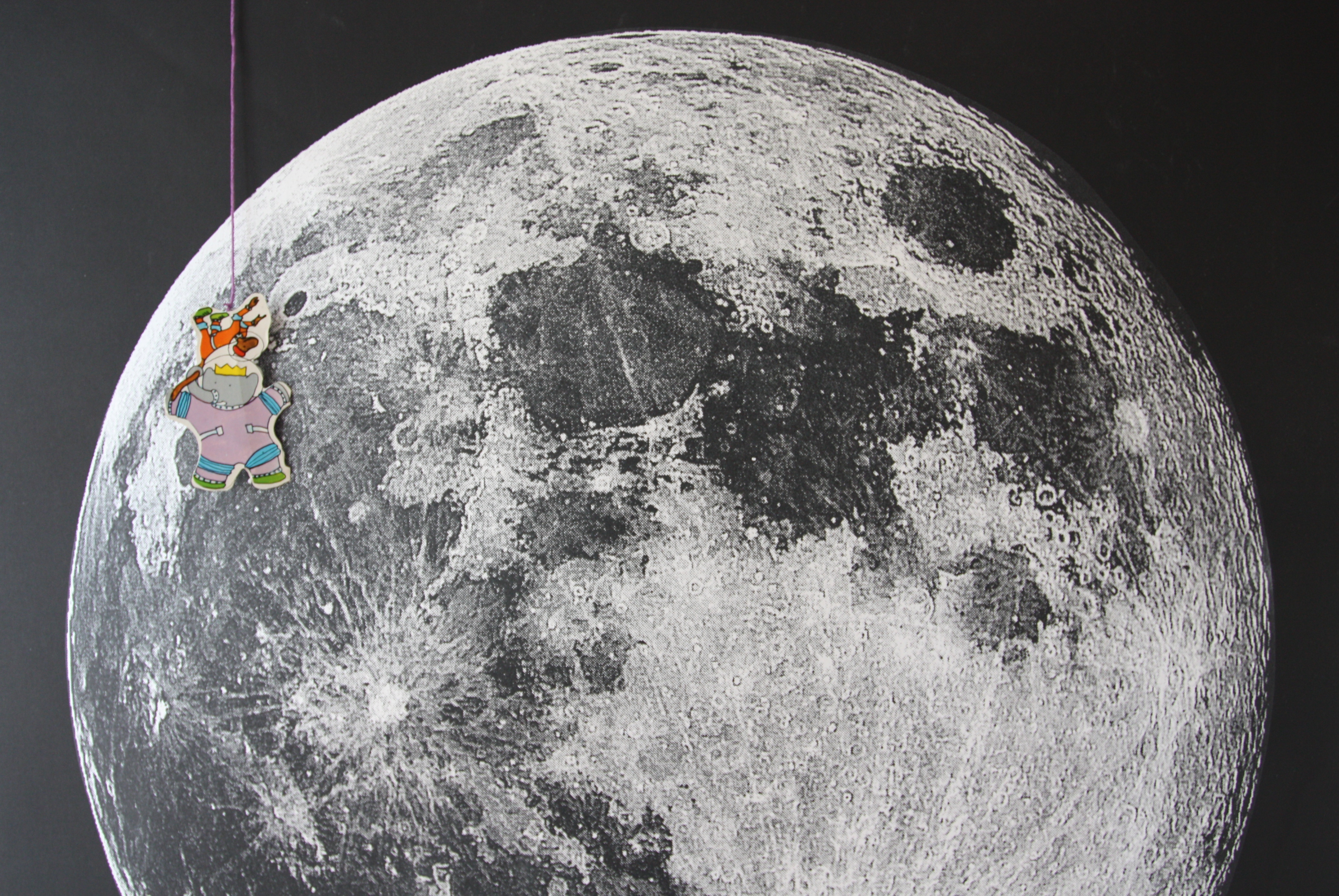 You might remember from my first post about Opal’s room that I was struggling to figure out what to do with the internal window between the bedroom and the little upstairs hallway.  It was previously covered by a  quilt made by a dear relative for Opal when she was born.  The quilt worked perfectly with the first incarnation of Opal’s room, but it clashed (as anything would) with the toran.  I wanted something that would let light into the hallway when the big windows in Opal’s room are uncovered, but that would block some light going into her room from the hallway so that she can nap during the day.

Our post about decorating with piano shawls was really my way of convincing myself that a fringed beauty (found on eBay) was the solution for this window. 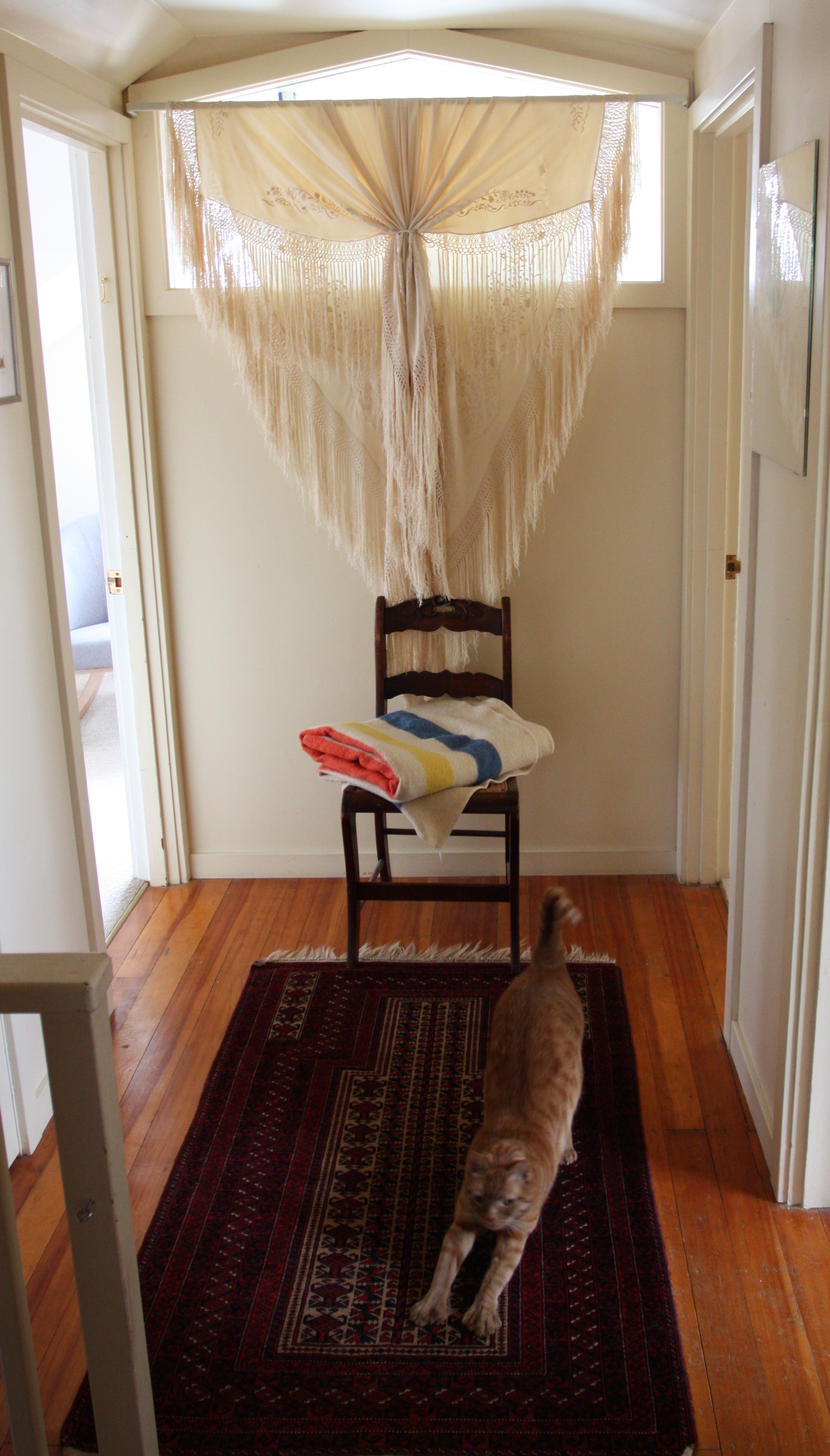 It lets a little light into the hallway, doesn’t visually compete with the toran, and I love the way it looks from all angles.  Plus Cromwell likes to sleep on the chair below it and luxuriate in the fringe.

I’m still working on the rest of Opal’s room, and I’ll share a full tour soon.  For now I’m pleased with how things are coming along, and most importantly Opal really likes it too.

And here is the big girl herself, reading one of her favorite books, The Little Puppy. 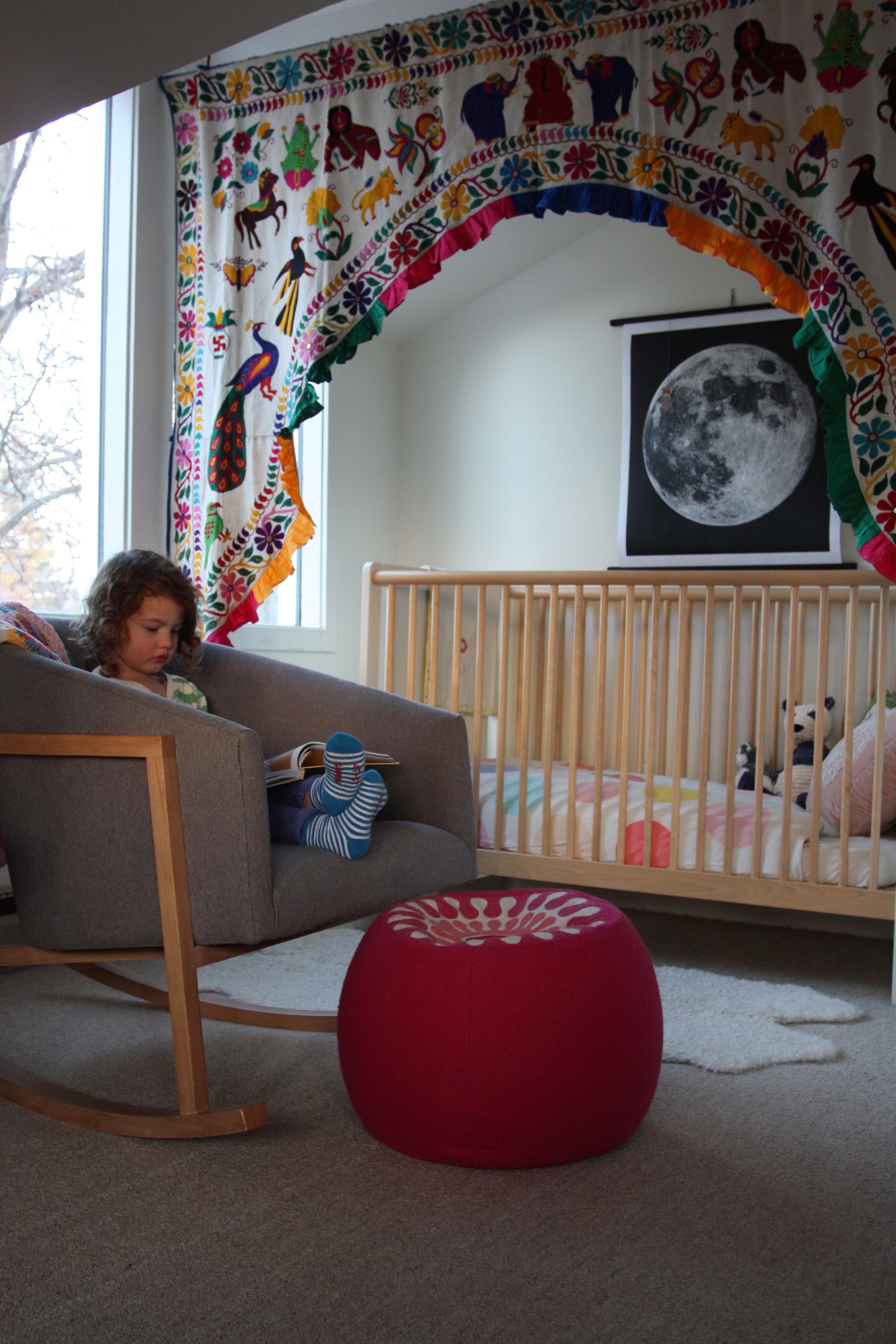 What you can’t see in this picture is that Opal is wearing Spider-Man undies made for little boys, except she likes to wear them backwards so the Spidey image is on the front and the little boy flap is on her bum. She’s the best.

Have a great week everyone!