We’ve almost wrapped up our couch project – the frame is complete (hooray!), but our dining room is buried beneath huge expanses of fabric, frayed and ripped upholstery thread, and the salt of a thousand tears.

For today I thought I’d show you some of the inspiration behind our couch. But first? A confession.

Do you remember back in September when I shared photos of this floral couch?  The couch that lost us a number of Instagram followers and was much maligned in the comments?

Well, here’s the thing. I bought that couch. Yes I did.  Despite the gagging noises implicit in your feedback, I went in on a day it was 50% off and plunked down cold, hard cash.  Cameron was pretty stoked to come in the door one evening only to be hustled right back out as I said, “You know that couch that you and everyone else hated? Well I bought it and we need to pick it up before the store closes tonight.”

At the thrift store, we removed the cushions – dislodging a bounty of used tissues, pet hair, other hair (oh god) and assorted debris – and hefted that sucker into the truck. Have I mentioned that it was our anniversary and that we were leaving on a trip and had a to-do list a mile long? Wood may be the traditional fifth anniversary gift, but I commemorated ours with a large, dirty couch that, according to Instagram, conjured up images of culottes, the 1980s, and too many cats. 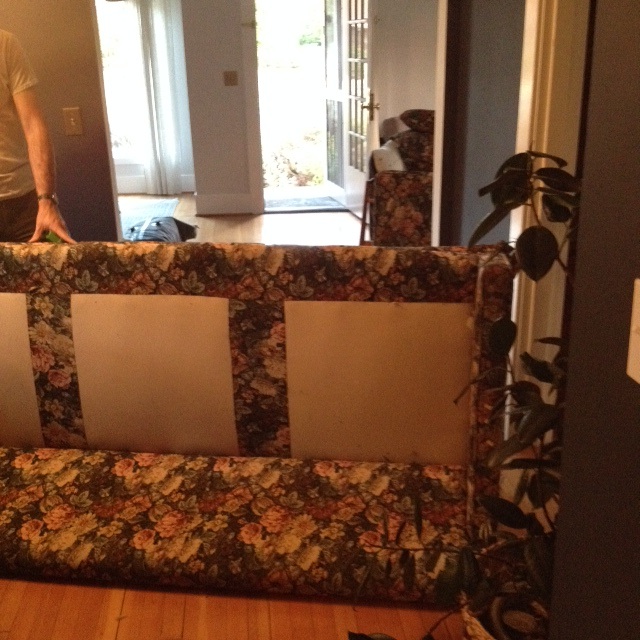 You see, dear readers, I was going to dazzle you with my incredible makeover skills.  If only the couch would have fit through our hallway, or the window we tried to cram it through, I’m very sure I would have succeeded.

The couch went back to the thrift store, and I did my best to move on. I couldn’t find anything I liked in the dimensions we needed (etched irrevocably in my brain after le soFiasco) at my usual haunts, but I saw this beauty on Anthropologie and thought, with my usual delusional confidence, pffft, we could totally make that.  And so it began.

I had an initial gut reaction to that Anthro couch, but when I wiped the hearts from my eyes and really looked at it, I realized it wasn’t totally practical for us.  I decided maximum lounging potential required two armrests to lean against, and more of an angle on the back.

I really loved this one by Australian designer Mark Tuckey, but decided it would be a lot of wood in a room that already has wood floors and wood trim. 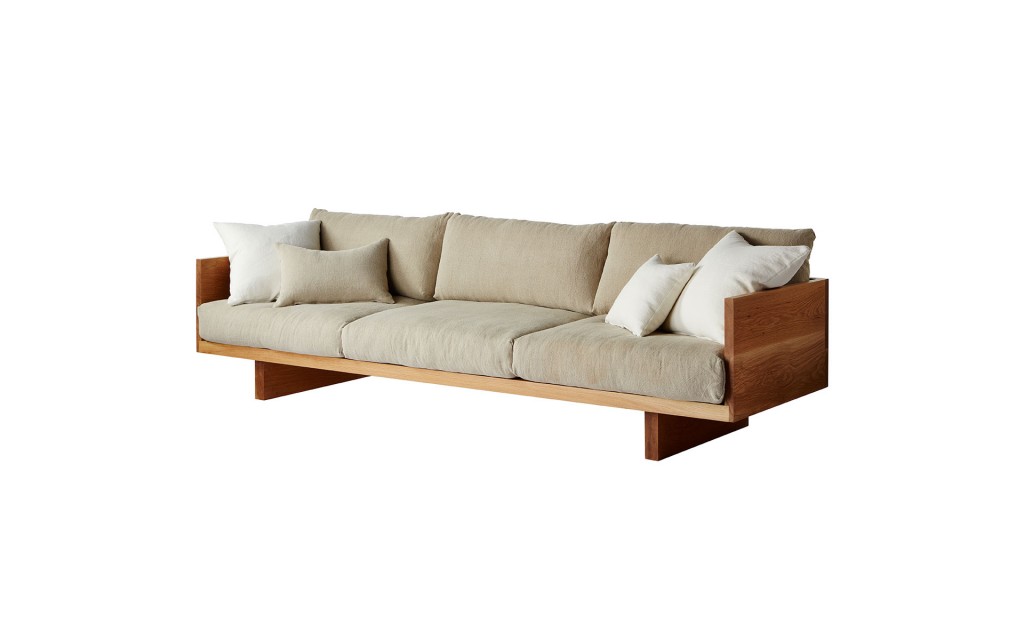 I was drawn to the cant of these arms, but not the rigidity of the back: 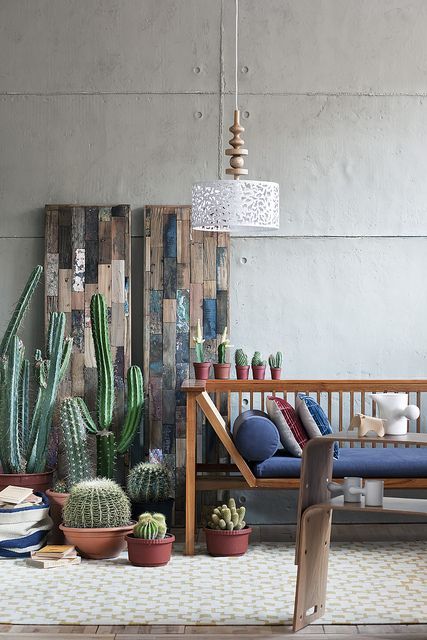 This dreamy sofa by Pop & Scott has neither arms nor back, yet I almost managed to convince myself that it was perfect. 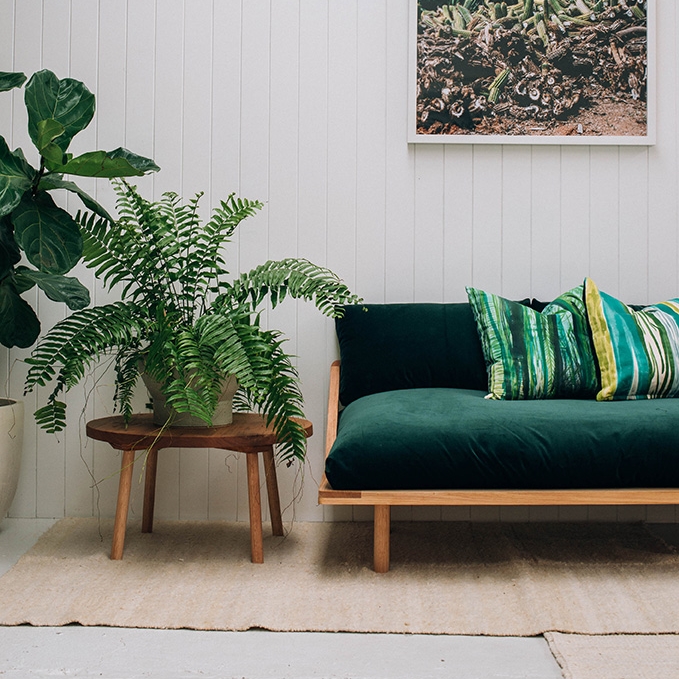 The couch we kept coming back to, and ultimately the one we based much of our design on, is this one found over on Italian flooring site Marazzi.  I loved the flare of the arms and the simplicity of the style, and figured we could up the comfort factor with deep cushions.

Once we had finally settled on a design for a frame, deliberations on the cushions began. I knew I wanted a single, long seat cushion with two back cushions and squishy, narrow cushions for leaning against the armrests.  Kind of like this: 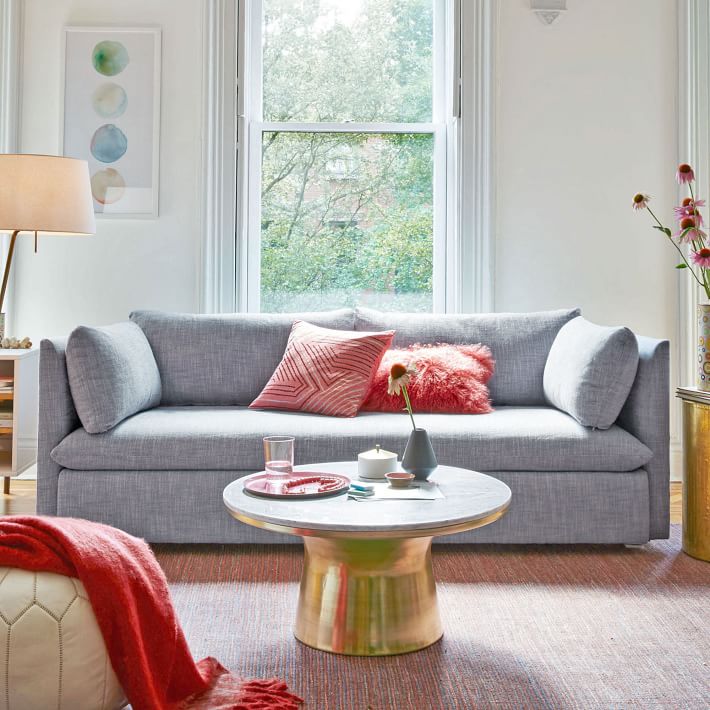 I also knew I didn’t want the shape of the seat cushion to be too boxy – I wanted it to be thick and inviting, and I got downright obsessed with the way cushions are seamed and curved. Like this one, where the fabric wraps around the front with no visible seams:

One way to achieve this look is the knife edge seam (unlike a box cushion with two seams, there’s a single seam and a T-shaped edge), as seen on a lovely Pop & Scott couch:

Here’s an example with a more pronounced single seam that encircles the whole cushion:

There’s something very appealing about the insouciance of flanged cushions (maybe because it looks like they’ve been moved from the bedroom to the couch?), and I gave them some serious consideration. 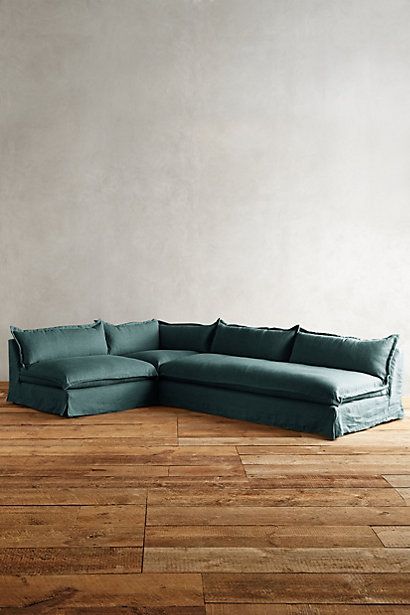 After endless deliberation I did make a decision, and as soon as I wrestle the fabric into submission I’ll be glad to show you everything!   For now, here’s a shot of our couch sans back:

Thanks for providing me with distraction (please send me some sewing mojo!) and for reading along, and have an excellent week!

*An update on the couch project is here